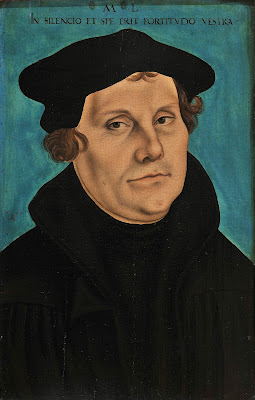 Action really does speak louder than words. Martin Luther's life, the subject of a remarkable exhibit at the Morgan Library and Museum, testifies to the power of deeds.

Martin Luther (1483-1546) is famous for asserting his opposition to the corruption of the Roman Catholic Church with an immortal declaration, "Here I stand. I can do no other."

Luther never actually said these words himself. A later historian composed the brave, bold statement for him.

This revelation might lead to the conclusion that "Here I Stand..." is a counterpart to "Washington's Cherry Tree" and other parables from the past. Yet the truth of these words is in their doing. Martin Luther did take a stand, with courage and candor, on behalf of his Christian faith.

Next year is the 500th anniversary of Martin Luther's break with the Church hierarchy in Rome. The momentous events of the Protestant Reformation which followed Luther's defiance changed the course of history for good - and ill.

The title of the Morgan exhibit,Word and Image, is well chosen. The Reformation was the first major event in history marked by widespread use of the printing press, in this case to “spread the word” of religious dissent. Likewise, this "sundering" of Christendom was documented with accurate contemporary engravings of the major participants, also a major innovation.

In 1517, Luther composed the famous Ninety-Five Theses, which sparked the revolt against the Papacy's control of Christian doctrine throughout Europe. Unlike the purported "Here I stand" declaration, the Ninety-Five Theses were very real. Luther, or a supporter, did indeed nail this document to a church door in Wittenberg, the university town in Germany where he taught theology. 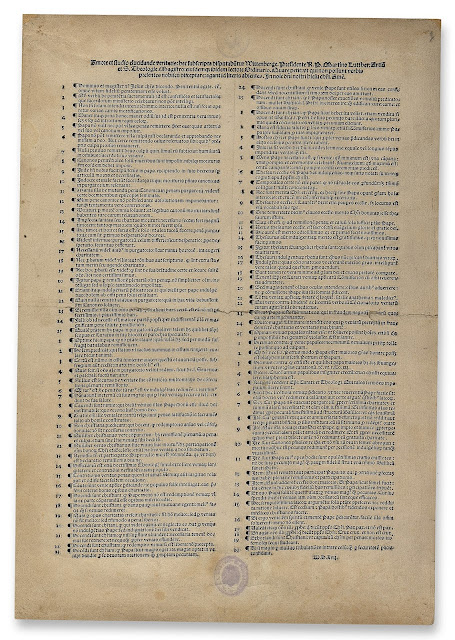 The Morgan exhibit displays one of the six remaining printed sheets listing the Ninety-Five Theses. A few copies of a pamphlet version have also survived. Why so few?

The Ninety-Five Theses were not intended to incite a revolution undermining Papal authority but rather were an announcement of a university debate. The subject of this rather routine affair was the sale of Indulgences which granted forgiveness of sins in return for cash contributions to the Church. These ninety-five "talking points," composed in scholarly Latin, mixed spirituality with bluntly speaking truth to power.

They preach only human doctrines who say that as soon as the money clinks into the money chest, the soul flies out of purgatory.  (#27)

The true treasure of the church is the most holy gospel of the glory and grace of God. (#62)

The public debate never took place. But, via the power of the printing press, the Ninety-Five Theses found a wide audience. 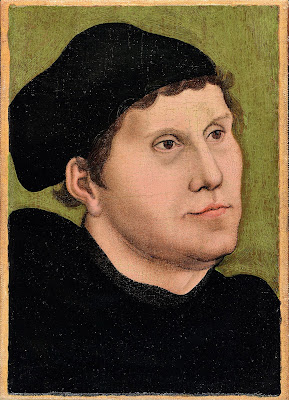 Luther had actually been quite respectful of the Pope, targeting the venal Indulgence sellers and emphasizing the need for sincere repentance. But Church leaders over-reacted, sending Cardinal Cajetin (who privately questioned Indulgences) from Rome to insist that Luther recant. Luther refused.

And so a publicity announcement for a debate that never happened became the spark for a revolution that was never intended or planned.

Luther waged a brilliant pamphlet campaign which left the Church hierarchy bewildered and beleaguered. Dissatisfaction - and not just with Indulgences - was rife throughout the Germanic-speaking regions of Europe. 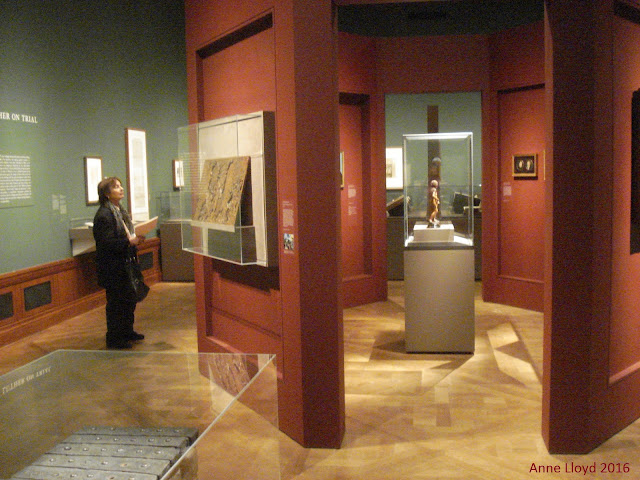 The "heavy artillery" of the Holy Roman Empire was deployed against Luther at a face-to-face meeting with Emperor Charles V in 1521. This pivotal conclave or Diet was held at the city of Worms, which has caused no end of merriment to English-speaking history students. But it was no laughing matter.

Luther refused to recant and went into hiding to prevent his arrest. Posing as "Squire George" at the castle of Wartberg, Luther spent the next ten months translating the New Testament into German from the original Greek text.

A complete translation of the Bible took a lot longer for Luther to achieve, appearing in 1534. He was assisted by several of his dedicated co-Reformers, including Philip Melanchthon (1497-1560) and Johannes Bugenhagen (1485-1558). This "official" version in one huge volume was given the unmistakable title: Biblia, das ist: Die gantze heilige Schrifft: Deudsch (Bible: that is the entire Holy Scripture in German).

The Luther Bible, New and Old Testaments, created a sensation. In the process of reaching beyond the Latin Vulgate Bible, Luther shattered the ecclesiastical monopoly of the Roman curia and evoked a key concept known as the Priesthood of All Believers, based on his populist interpretation of the First Epistle of Peter.

Luther also transformed the German language into a dynamic cultural and political force, decisively shifting the political balance of the Holy Roman Empire away from the authoritative control of the Hapsburg dynasty. Christian unity and the Medieval world order collapsed as the first editions of Luther's Bible, the September Testament and December Testament, sold-out as soon as they came off the printing presses in 1522.

The Morgan exhibition covers these momentous events with an array of original documents - many written by Luther himself - and rare books from German collections. On view are the actual notes Luther prepared for his confrontation with Charles V at Worms, the manuscript of Luther's translation of the Old Testament and copies of the September and December Testaments. 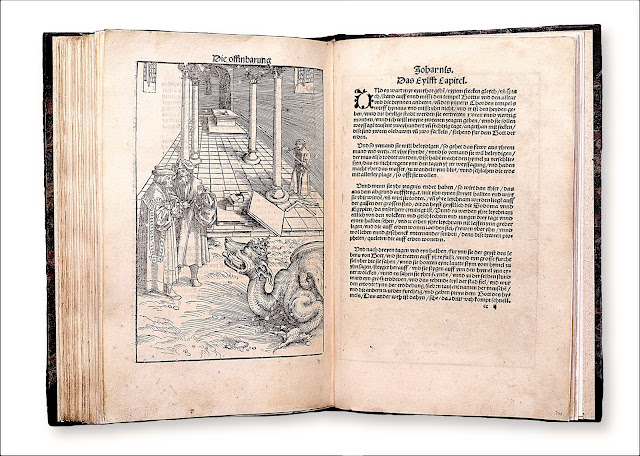 The Lutheran Reformation was also a major event in art history. Later incidents of the Protestant Reformation, especially in the British Isles where the theology of John Calvin was preferred to Luther's, triggered a tragic destruction of religious images. Luther and Melanchthon denied that religious pictures or statues had spiritual power but asserted that such images could assist the faithful in understanding Christian principles.

In order to grasp the impact of the Protestant Reformation, it is necessary to understand the late-Medieval world of Luther’s youth. The Morgan curators did a brilliant job evoking “the autumn of the Middle Ages” as this period is sometimes called. 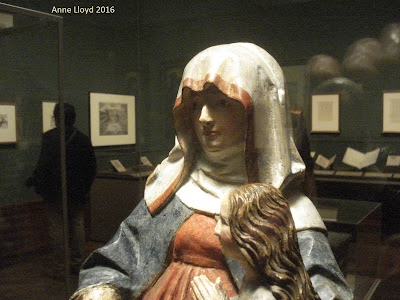 Anne Lloyd, View of St. Anne with the Virgin Mary, by an Anonymous artist, ca. 1520

Among the late-Medieval art works on view is a carved limewood statue depicting St. Anne and the youthful Virgin Mary. St. Anne was the patron-saint of miners, Luther's father being a mine manager. In 1505, Luther, then a law student, was caught in a violent storm. He was nearly struck by lightning and vowed to St. Anne to become a monk if his life was spared. Luther continued to fondly recall St. Anne even after he came to question the role of saints as intercessors with God.

The statue of St. Anne is a fine example of German folk art. But an extraordinary bas- relief, carved by Peter Dell the Elder (1490-1552) is one of the most astonishing works of art on display in Word and Image.

Sculpted in pearwood, two of the central incidents of Biblical history are depicted in Dell's Allegory of the Old and New Covenant. With a cinematic grasp of narrative and an absolute mastery of wood-carving, the temptation of Adam and Eve and the Crucifixion of Christ are brought to life. 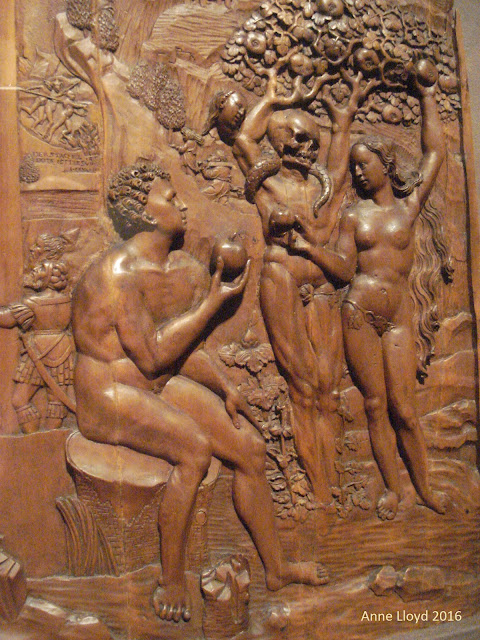 Anne Lloyd, Detail of Allegory of the Old and New Covenant by Peter Dell, ca. 1540

Each of the protagonists portrayed on Dell’s bas-relief is presented as a unique individual, absolutely convincing in their role in the divine drama. Equally believable is the grimacing skull atop the Tree of the Knowledge of Good and Evil. The Death's Head intrudes into Paradise like a hellish apparition. But the striking sensuality of the nude Adam and Eve deflects our attention away from the specter of death. 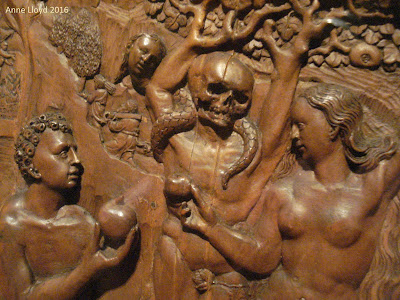 Anne Lloyd, Detail of Allegory of the Old and New Covenant by Peter Dell

This current of eroticism is not what you would expect in a work of Christian art from five centuries ago. Yet, it is a powerful, recurring theme in Word and Image, notably in works by Lucas Cranach the Elder.

Lucas Cranach (1472 -1553) was one of Luther's closest friends and an unswerving supporter. Cranach was a brilliant portrait painter and, if not quite of the caliber of Albrecht Dürer or Hans Holbein, he had a knack for capturing the earthy elements in Luther's character and the sharp, hausfrau capability of his wife, Katrina von Bora. 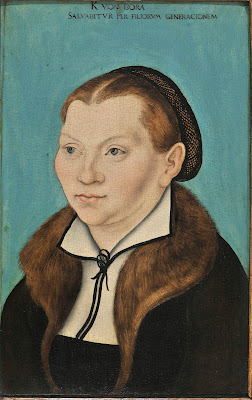 Cranach provided illustrations for the early editions of Luther's Bible-translations. But he also painted nudes - nude women from mythology and from the Bible. Almost all of them seem disconcertingly the same, whether they represent Eve, as in the work on display in the Morgan exhibit, or Greek goddesses being judged by Paris.

In a brilliant book about the friendship of Luther and Cranach, Steven Ozment theorized that Cranach's portraits of women, clothed and nude, were a riposte to the creed of celibacy of the established Church. 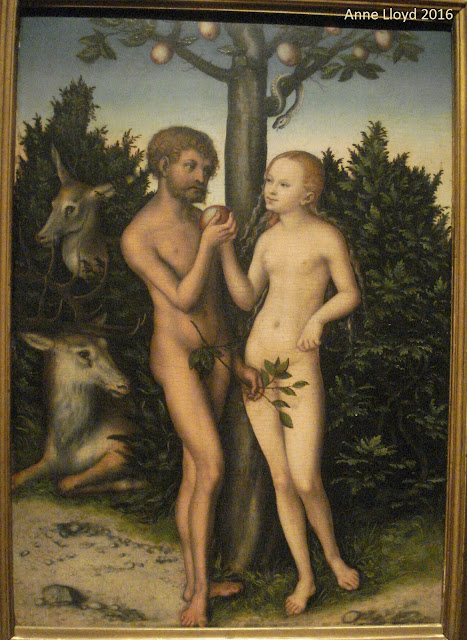 In the reformatory atmosphere of the early sixteenth century, Cranach’s nudes also confirmed the private desires of Everyman and Everywoman for companionship and intimacy with the opposite sex... Cranach’s alluring images of women drove home the awesome power and divine blessing of human sexuality in and through which new life is created.

Strange things happen during revolutions. Perhaps Ozment, a very perceptive scholar of the Reformation, is correct about this puzzling aspect of Cranach's work.

One thing is certain about the Reformation - and only a little time in the Morgan's Luther exhibit is needed to realize this. The Reformation was a Revolution, the first of modern times. In fact, the Reformation created "modern" times. 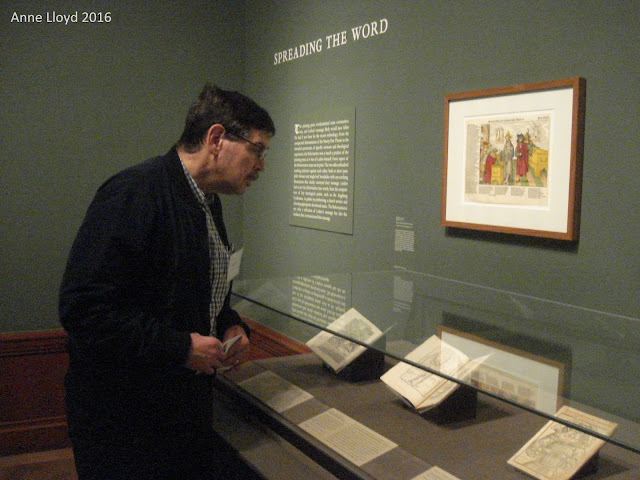 For an institution which plans and organizes superb exhibits on a "routine" basis, the curators of the Morgan have seemingly surpassed themselves with Word and Image: Martin Luther's Reformation. Yet, an equally outstanding exhibition celebrating Charlotte Brontë (about which I'll be posting a forthcoming review) is currently upstairs at the Morgan and a major exhibit about Emily Dickenson is coming in January 2017.

Art exhibits take years to plan and only remain on display for three to four months. Great exhibits, however, loom large in the memories of those fortunate to visit them. Word and Image: Martin Luther's Reformation at the Morgan is sure to do exactly that.

Anne Lloyd (2016) Detail of Peter Dell's Allegory of the Old and New Covenant,

Anne Lloyd (2016) Detail of Peter Dell's Allegory of the Old and New Covenant.

Posted by Art Eyewitness at 4:50 PM