Paint the Revolution: Mexican Modernism at the Philadelphia Museum of Art 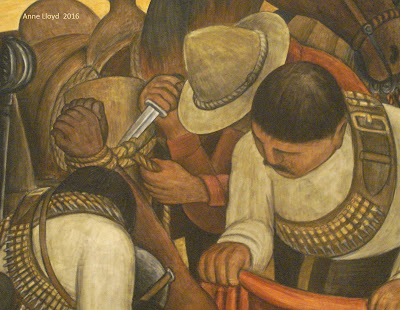 Paint the Revolution: Mexican Modernism, 1910–1950, is a tale of two struggles. The new exhibition at the Philadelphia Museum of Art presents a definitive retelling of the story of the Mexican Revolution and its brilliant artistic aftermath.

On December 1, 1920, a one-armed general named Álvaro Obregón  was elected President of Mexico. Obregón was a chickpea farmer turned military tactician. In 1915, his astute generalship won the bloody battle of Celaya, turning point of the Mexican Revolution.

Obregón was also the "last man standing." He had survived the slaughter that had claimed the lives of over one million Mexicans, including more famous rivals like Emiliano Zapata.

Obregón's election brought the military phase of Mexico's revolutionary conflict to a close. A second, cultural revolution began as soon as the gunfire ceased. The time had arrived, as a perceptive U.S. journalist, John Dos Passos, observed, to "paint the Revolution."

The Mexican Revolution was a vast, sprawling event, of "Russian novel" dimensions and a bewildering cast of protagonists. The second phase was no different. The sheer number of major artists of the Mexican Renaissance, as it is often called, is staggering: José Clemente Orozco, David Alfaro Siqueiros, Diego Rivera, Frida Kahlo,Tina Modotti, Manuel Álvarez Bravo and many more.

Paint the Revolution at the Philadelphia Museum of Art somehow encompasses this vast cast, giving due recognition to all. This is a major, insight-packed reappraisal of a hugely significant event. 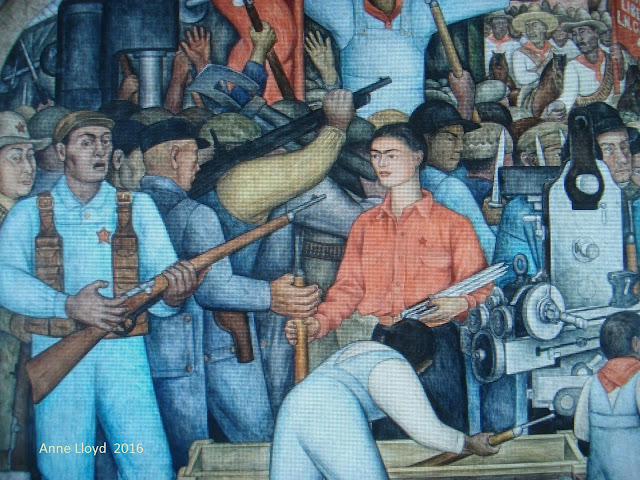 Digital version of Ballad of the Proletarian Revolution (detail) by Diego River,1928-29

This brilliant exhibit also manages the seemingly impossible task of recreating the vast public murals that figured so prominently during Mexico's revolutionary era.Three major mural cycles are depicted using digital technology in a way that enables the scale and scope of these mighty works of art to be grasped.

The Mexican Revolution began in November 1910. Simmering rage over the expropriation of communal land erupted into revolt. The long-time dictator, Porfirio Diaz, was swiftly toppled from power. A succession of leaders beginning with Francisco I. Madero, however, failed to create a stable and equitable new government. Madero's assassination in 1913 detonated a brutal civil war.

A number of works of art are displayed that show the efforts to create a heroic myth for the Mexican Revolution. These are "after-the-fact" images, much like nineteenth century representations of the American Revolution. These present history as contending political factions wished it had happened - not necessarily as it did occur.

David Alfaro Siqueiros (1896-1974) was an avowed Marxist, co-founder of El Machete, the newspaper that became the mouthpiece of the Mexican Communist Party. Siqueiros depicts Emiliano Zapata as a Proletarian hero in two works displayed in the exhibit. Zapata was indeed a champion for land reforms for Mexico's peasant class. But close scrutiny of these two works by Siqueiros raises red flags of a different sort. 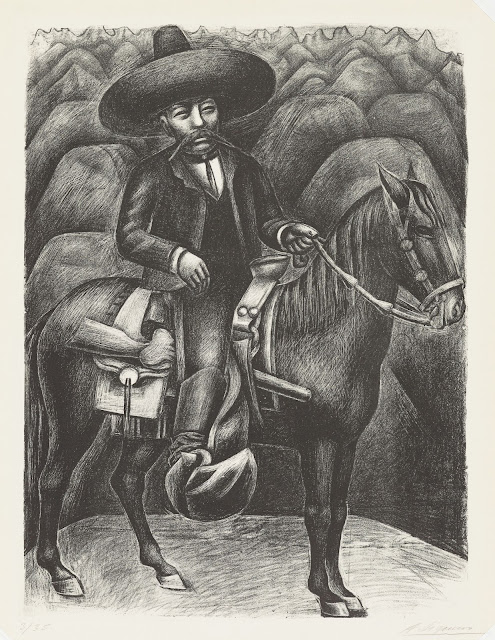 This 1931 lithograph of Zapata presents him as a hard-riding guerrilla leader. It is the very image of a commander during the Mexican Revolution. Look closer at Zapata's features - and even more so at the portrait painted the same year, part of the Hirshorn Museum collection - and we see a different character altogether. Here is a Stalinist reworking of Zapata's image by Siqueiros. Apart from the carefully-groomed mustache (Zapata was rather vain about his mostacho), the resemblance is far closer to Stalin than to Zapata.
Siqueiros was such a staunch supporter of Stalin that he helped plan a botched-assassination of Leon Trotsky who had fled to Mexico to escape Stalin's agents. The eventual murder of Trotsky in 1940 was carried out by a professional Communist hit man. Siqueiros was a far better artist than an assassin.

A much more  convincing work of art related to the Mexican Revolution is Diego Rivera's searing depiction of the rescue of a peasant who had been brutally lashed and left to die in the desert. Revolutionary troops, having set fire to a rural estate, are tending to the wounds of their tortured compadre. 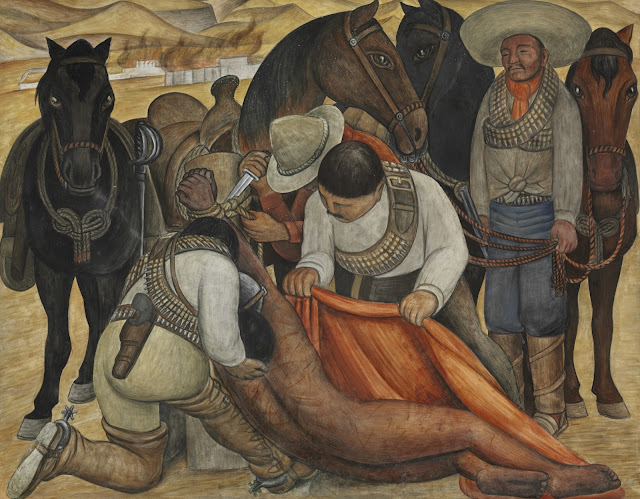 Diego Rivera, Liberation of the Peon, 1931

Diego Rivera (1886-1957) painted this "portable" mural in 1931, using the fresco technique popular during the Italian Renaissance. This profoundly moving work is in many ways a worthy successor to Renaissance painting. It conveys the same compassion and empathy expressed in Giotto's Lamentation. The horses in Liberation of the Peon express the almost surreal intensity of the war horses in the Battle of San Romano by Paolo Uccello. 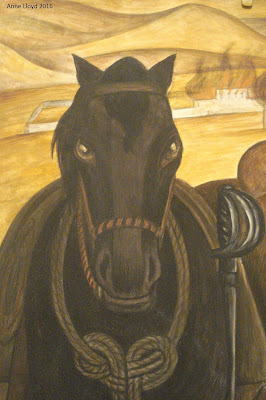 Anne Lloyd, detail of Liberation of the Peon, 1931, by Diego Rivera

Rivera's Liberation of the Peon is based upon a much larger fresco, approx. 14' 4 3/8" x 11' 5", which he painted in the courtyard of the Education ministry in Mexico City. This brings us to one of the central protagonists of the Mexican cultural revolution, José Vasconcelos, appointed by President Obregón to head the Secretaría de Educación Pública.

In a bold move, Vasconcelos encouraged Rivera to return from Europe, where he had spent most of the years of the Mexican Revolution. Vasconcelos pressured Rivera and other artists awarded government contracts to paint in a style reflecting the lives and aspirations of Mexico's long-suffering peasants and growing urban work force.

Along with the digitized versions of classic murals by Rivera, Siqueiros  and Orozco, an actual mural, painted by Manuel Rodriguez Lozano, is displayed in the exhibit. 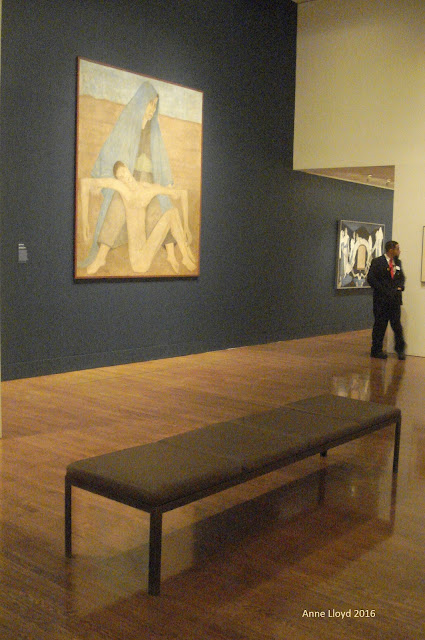 Anne Lloyd, gallery view of Pieta in the Desert by Manuel Rodriguez Lozano

Pieta in the Desert was originally painted on a prison wall, while Lozano was incarcerated in 1942. The mural  was later removed by the rather alarming technique called strappo. The mural is covered with resin, glue, fabric and tape and then pounded with a jackhammer which cracks the concrete on which it is painted enabling the mural to be lifted clear of the debris and remounted.

The Tres Grandes - Rivera, Orozco and Siqueiros - went on to produce mural cycles in  the United States which influenced public art in New Deal America during the Great Depression. They also created controversy, Rivera's ill-fated mural in Rockefeller Center being the most notorious example, and confusion.

Almost all of the great themes of Mexican art during this revolutionary era were first exhibited in traditional easel paintings. The wonderful Futurist Portrait of Nahui Olin, by Gerardo Murillo, (1875–1964) who styled himself as Dr. Atl, was painted in 1921. 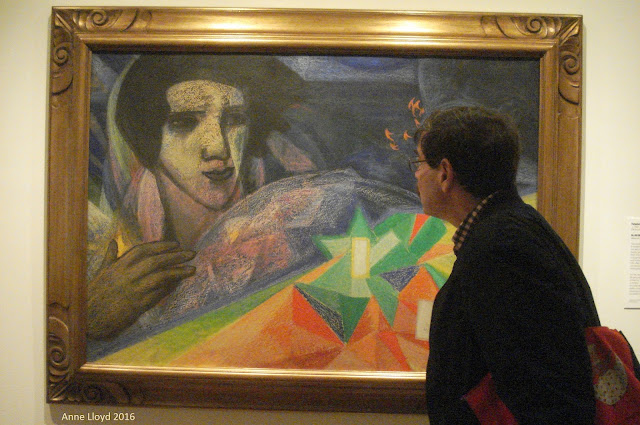 Incredibly, easel paintings like this were dismissed by a radical 1924 manifesto as lacking in heroic vision. Easel paintings, the most easily transported art form, were declared to be unsuited to instruct the Mexican masses.

It was Rivera's wife, the now celebrated Frida Kahlo, who would "square the circle" and use easel painting to create socially conscious works of art. Undeniable "heroism" was in her shattered, suffering body and soul. This courage she painted on easel-sized canvases.

There are five works by Kahlo in Paint the Revolution. The exhibition curators chose wisely, selecting paintings that exemplify Kahlo's focus on  social issues and Mexico's problematic relationship with the United States. 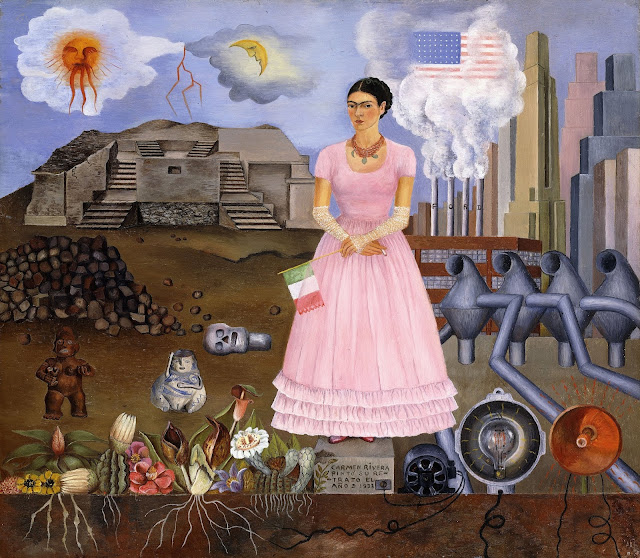 Frida Kahlo, Self-Portrait on the Border Line Between Mexico and the U.S.,1932

Self-Portrait on the Border Line Between Mexico and the United States, painted in 1932, brilliantly juxtaposes the industrial pipelines and electric wires of the smog-shrouded United States with symbols of "eternal" Mexico, rooted in the natural world.

The career of Maria Izquierdo (1902-1955) reveals the mural-easel, male-female fault lines running through Mexican Modernism. Izquierdo seemed an almost unstoppable artistic force during the late 1920's and 1930's. In 1930, Izquierdo had the first solo exhibit of a Mexican woman artist in the U.S.

Izquierdo's work, combining religious and folk art themes was praised by the Surrealists and during the early 1940's she exerted a powerful presence throughout Latin America. However, her design submissions for a major mural commission which she received in 1944 were rejected. Rivera and Siqueiros, often at odds, united to sabotage Izquierdo's attempt to achieve the ultimate level of recognition in Mexican art, mural painting.

When Izquierdo tried to regain the commission, the male-dominated art establishment thwarted her efforts. Her career and health went into a downward spiral. 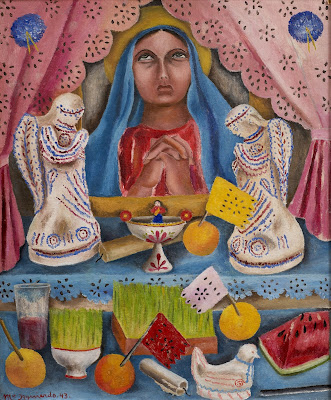 María Izquierdo, Our Lady of Sorrows, 1943

Izquierdo bitterly declared that "it is a crime to be born a woman and have talent."

The same could be said for the brilliant photographic work of Tina Modotti - though she would not have said so herself.

The Italian-born Modotti came to Mexico with the noted American photographer, Edward Weston, who was for a time her lover and teacher. Modotti revealed superlative gifts in photography, documenting the lives of Mexico's peoples with incredible artistic vision.

Modotti's career took a radical slant when she joined the Mexican Communist Party in 1927. She became entangled in the violent internal struggles of Leftist groups in Mexico and she was a prime-suspect in the murder of her new lover, the Cuban-born radical, Julio Antonio Mella, in 1929. Though cleared of the charges, Modotti left Mexico under clouds of suspicion. 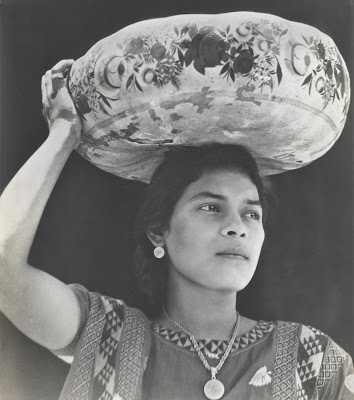 Modotti's subsequent fate was tragic. All her talents became subsumed in Marxist politics, especially related to the Spanish Civil War. She gave up photography in 1931 and her amazing body of work was only rediscovered in the late 1970's with the dawn of the Feminist movement.

The political radicalization of Modotti and almost all of the leading Mexican artists is symbolized by the wood engraving, Proletarian Hand, by Leopoldo Méndez. The finger bones are hanged prisoners and the wrist bomes are portraits of political martyrs, including Mella. It is a brilliant, unforgettable work, evoking the  great nineteenth century printmaker, José Guadalupe Posada (1852 – 1913), whose prints of demonic skeletons helped bring down Porfirio Diaz. 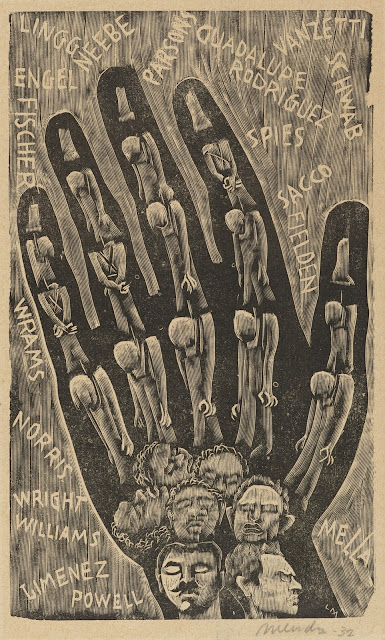 Proletarian Hand is very much  a work of the 1930's. It ignores the sacrifices and suffering of women. Likewise, it focuses on the international scene at the expense of Mexico. Two of the "martyrs" named in the print were Sacco and Vanzetti, the Italian anarchists who were executed for murder in the U.S. in 1927. While the artistic elite of Mexico may have been radicalized by such political imagery, the impact on Mexico's workers was negligible.

Mexican Modernism grew increasingly remote from the realities of Mexican life. The economy of Mexico strengthened, especially as Mexico's oil industry was needed by the Allied war effort in World War II. Many Mexicans, loyal to conservative traditions and the Catholic religion, deeply resented the Marxist ethos of the "Modernists."

There was also the inconvenient fact that many Mexican artists, including strident Marxists, depended on sales and commissions from "El Norte." Frida Kahlo's first big success was a sale of four paintings to the American actor, Edward G. Robinson, in 1938.

By 1950, the two-fold Mexican Revolution and Mexican Renaissance had run their course. But these events had entered into the heart and soul of the Mexican people. It is no surprise that whenever social ferment arises in Mexico, the vivid images displayed in Paint the Revolution are revived, coaxed back to life and action like the beaten prisoner in Liberation of the Peon.

***
Text: Copyright of Ed Voves, all rights reserved
Images courtesy of the  Philadelphia Museum of Art

Anne Lloyd (2016), Detail of the digital version of Ballad of the Proletarian Revolution by Diego River, 1928-29, mural painted at the Ministry of Public Education, Mexico City.