Drawings for Paintings in the Age of Rembrandt at the National Gallery, Washington 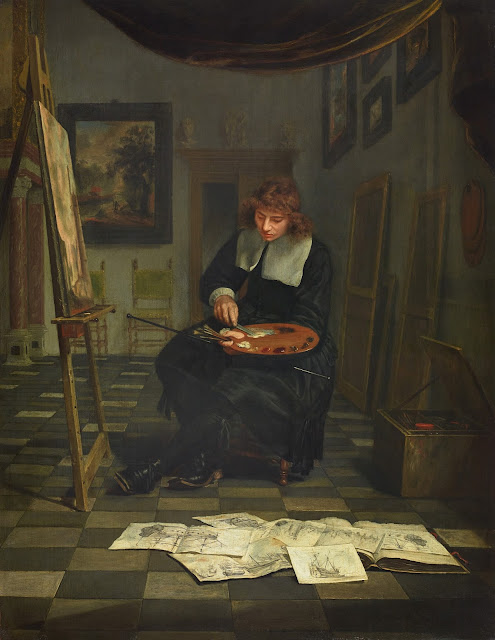 Drawings for Paintings in the Age of Rembrandt

Drawings for Paintings in the Age of Rembrandt, which just opened at the National Gallery in Washington D.C., testifies to Thomas Edison's often-quoted remark.

Drawings for Paintings in the Age of Rembrandt provides vital insights into the work habits and methodology of leading Dutch masters from the seventeenth century "golden" age. This exhibit shows how Dutch artists "perspired" in order to realize their inspiration on the canvas sheets stretched on the easels in front of them.

The focus of Drawings for Paintings in the Age of Rembrandt really is on drawing rather than on painting. There was no color vs design controversy in the Netherlands as had been the case in Renaissance Italy. Dutch artists were determined to be expert at both drawing and painting, always with an eye on selling finished oil paintings. The National Gallery exhibit shows that they succeeded in both endeavors. 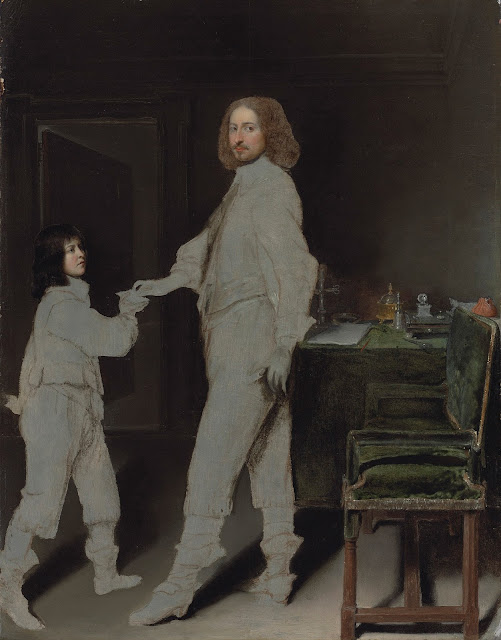 Gonzales Coques, Portrait of a Man Receiving a Letter from a Boy, c. 1660

A rare, unfinished work provides immediate insight into the importance of drawing for painting in the Netherlands during the 1600's. This painting is believed to be the work of a Flemish artist working in Holland, Gonzales Coque. It exemplifies the keen Dutch eye for capturing a subject's personality. The skill needed to position a painting's underdrawing, directly on the canvas or wood panel, is evident too. Why Coques, an associate of Anthony van Dyck, never finished this portrait, so splendidly begun, is unknown.

The catalog for Drawings for Paintings includes an insightful essay by the art scholar Ger Luitjen on the Dutch zeal for drawing. The ancient motto from the Roman writer Pliny, Nulla dies sine linea (No day without a line) struck a chord with the well-read, hard-working Dutch. A translation of Pliny's injunction to sketch predictably appeared: Geen dag zonder trek (No day without drawing).

Luitjen also notes that the Dutch emphasis on drawing had a wider impact than serving as a basis for painting. Other artists and artisans relied upon a facility in drawing too: sculptors, architects, tapestry designers. But the most profound implications of closely-observed drawing were psychological, in keeping with the leading role of the Dutch in the Scientific Revolution. The telescope and microscope were both Dutch inventions but neither would have been created had the Dutch not been an observant, imaginative people to begin with.

"Undergirding the conviction that drawing was important lay the belief that it intensified the process of looking," Luitijen writes. "An added advantage was that someone with a trained drawing hand would benefit when wishing to record something while studying physics and mathematics."

The link between drawing and painting is most readily observed in two works by Salomon de Bray. De Bray sketched the infant children of his nephew with red chalk, the preferred medium for sketching. Close analysis revealed that de Bray did a light, preliminary drawing using black chalk before his more detailed effort with red chalk. 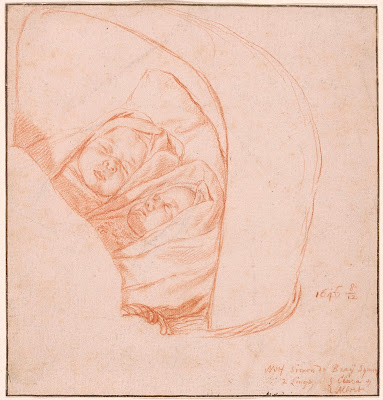 There are many differences between de Bray's final version in oil and this preparatory work. The open eyes of the two babies in the painting and the baptismal medals around their necks are only the most obvious changes from sketch to painting. Both of these details are very significant. Most portraits of infants in the Netherlands during the 1600's were memorials to deceased babies. The medals testify to the Roman Catholic faith of the de Bray family. This remarkable painting is a statement of religious faith and a celebration of the gift of life. 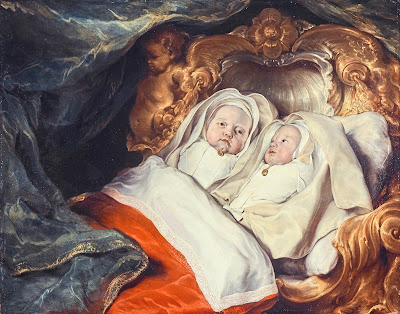 The differences between drawing and painting of The Twins Clara and Albert de Bray have led some scholars to believe that de Bray did an oil sketch as a second stage in the composition. But the astute commentary in the exhibit catalog concludes that he worked only from this simple sketch and from memory to create the superb and endearing final version in oils.

There are numerous examples of the exhibit's namesake on view. Rembrandt's somber painting, Joseph Telling His Dreams, is particularly noteworthy. Dating to 1633, this work was based in part upon a red chalk sketch of an elderly man, drawn two years previously, who reappears as the seated Jacob. 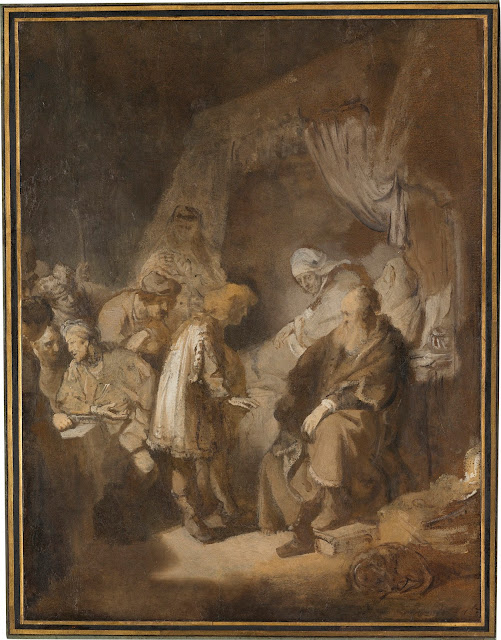 The various biblical characters grouped around Joseph and Jacob were likely taken from multi-figured sketch book pages. Rembrandt utilized such sketches throughout his life, referring to these for a pose or a facial expression as needed.

A good example of such a sketch is on view in the exhibit, Studies of Mary, the Mother of Christ and Mary Magdalene. Rembrandt's The Entombment of Christ, c. 1635-39, was based upon it and no doubt similar drawings. After he was satisfied with the basic design of Entombment, Rembrandt would then have filed these sketches away for future use. 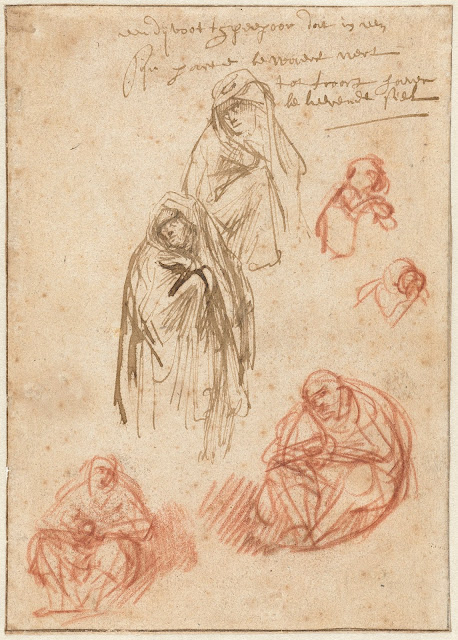 There are no records of Dutch artists creating finished oil paintings en plein air as the Impressionists would do two centuries later. But the practice of sketching out of doors was surely widespread. One painter who ventured beyond his studio to record the world around him unwittingly documented the climate change known as The Little Ice Age.

Beginning around 1300, temperatures in the Northern Hemisphere began to cool, with periodic fluctuations that caused to such bizarre phenomena as the 1608 Frost Fair on the Thames River in England. The canals in Holland regularly froze enabling the Dutch to skate and play "kolf" on the ice. Kolf was a curious blend of street hockey and modern-day golf.

Hendrick Avercamp (1585-1634), though a deaf-mute, became a master drafstman whose drawings were prized by other Dutch artists, Avercamp's painting, A Scene on the Ice, c. 1625, is based on a preliminary work such as A View of Kampen from Outside the Walls, done around 1620. This work was created with pen and brown ink with watercolor over graphite on paper. It shows the city of Kampen overlooking the river IJssel in warm weather. 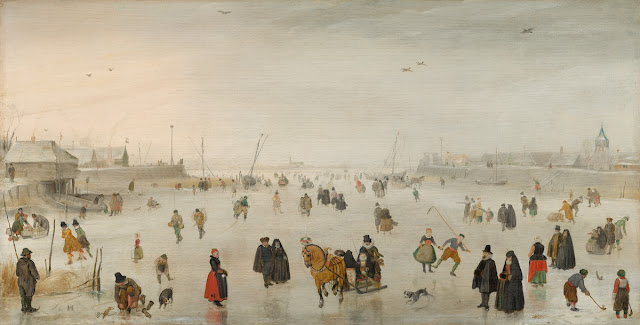 The 1620's saw some very cold winters - the Thames froze again in 1621. Avercamp, who lived in Kampen, had only to take his sketchbook down to the banks of the frozen IJssel and draw the sleighs, skaters and kolf players.

His voluminous sketchbooks providing a wide-ranging selection of winter-clad characters and architectural details, Avercamp was well-prepared to compose his works in oil. With the setting already recorded, Avercamp could paint ice in place of water and skaters instead of sailboats. This he did and did repeatedly until he became the recognized expert in painting winter scenes

Dutch artists were meticulous and exacting draftsmen. But their drawings for the most part were intended for use and then discarded. What is displayed in this splendid exhibition, organized by Arthur Wheelock Jr., the National Gallery's dean of Dutch seventeenth century art, is a mere fraction of what was created during that prolific era. Many of the drawings that did survive come from a research institution in Paris, the Fondation Custodia, Collection Frits Lugt, dedicated to the preservation of the art of the Dutch Golden Age.

The final gallery of the exhibition examines architectural works by such masters as Gerrit
Berckheyde and Jacob Van Ruisdal. The exhibit uses the advanced technology of infrared reflectography to examine the underdrawings of these amazing paintings. Some exciting and unsuspected discoveries were made. 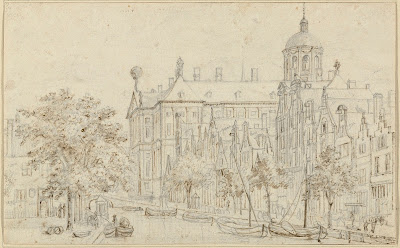 Gerrit Berckheyde, View of the Nieuwezijds Voorburgwal in Amsterdam

For all of their emphasis on precise drawings, Dutch painters often used these as a guide, rather than directly transferring the image to the canvas and painting in the colors. We can see this process in a painting by Michiel van Musscher. In An Artist in His Studio with His Drawings, the painter has his sketches spread out around him which he is using to create an oil sketch. This in turn would serve as the source for the finished version.

Creating the final work in oil was an exacting and exhausting labor. Every artist had his - or her - own techniques and technical aids to guide their compositions, safeguarded to protect the "brand." Yet, the artistic process was never a routine, "cut and paste" process. Individuality, as well as hard-work, was the key to Dutch creative excellence.

Wheelock notes in the catalog that Berckyde "was so interested in topographical accuracy that he even amended drawings at a later date when new buildings were constructed." 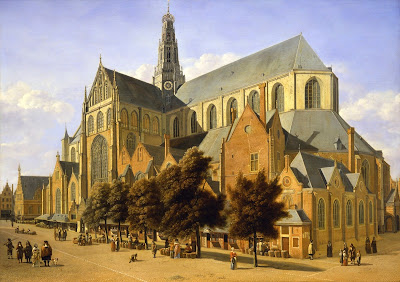 Gerrit Berckheyde, The Grote Kerk or St. Bavokerk in Haarlem, 1666

Berckyde, however, was far from a pedantic recorder of architectural detail. He often chose unusual vantage points for his final versions. Likewise, the brilliant way that he articulated light and shadow gives an almost photographic effect to works like his 1666 oil on panel, The Grote Kerk or St. Bavokerk in Haarlem.

The Dutch Golden Age is such an inspiring cultural phenomenon that it seems appropriate that  van Musscher's Artist in His Studio should be wearing his "Sunday best" attire while hard at work on his masterpiece.

The reality was far different, though the Dutch have always made a virtue of order and cleanliness. The work environment of most Dutch artists was closer to the shabby, sweat-soaked surroundings of Cornelis  Bega's The Alchemist.

The lighting of a Dutch master's studio would doubtless have been better than the dungeon-like atmosphere of the workshop of The Alchemist. But the pungent smells, the stacks of unfinished works requiring immediate attention to keep the bills paid, the very air of hard labor and anxious expectation - these would have been the same. 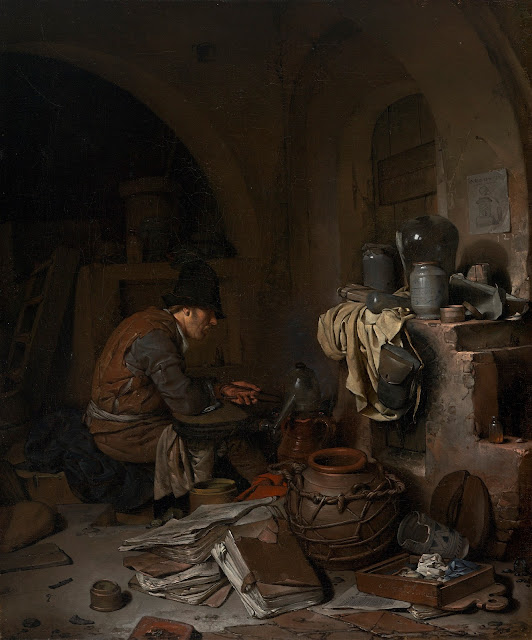 Genius is a messy business. But the result - when everything "comes together" - can sometimes create a "golden" age. That is what occurred in the Netherlands during the 1600's and the works on display in the National Gallery's Drawings for Paintings in the Age of Rembrandt are proof of the Dutch work ethic and visionary dedication to art.