Securing the Shadow: Posthumous Portraiture in America at the American Folk Art Museum 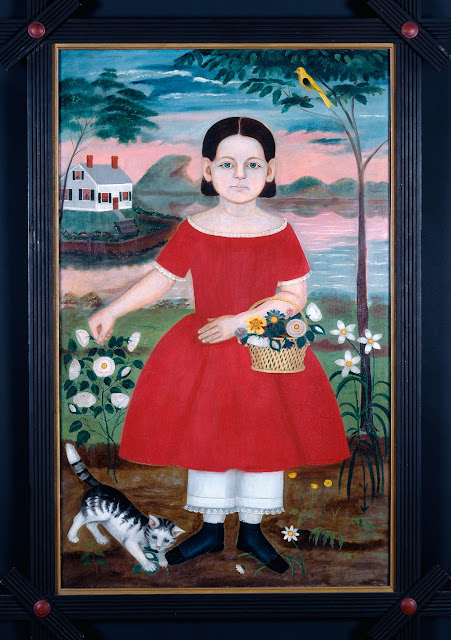 Teddy bears and fairy tales were not part of the bedtime ritual of children in early America. Instead, the sobering prayer from The New England Primer was chanted, sing-song, for nearly two hundred years:

A profoundly moving exhibition at the American Folk Art Museum in New York City provides insight into the haunting presence of Death during the colonial era and the formative years of the American Republic.

To modern sensibilities,The New England Primer prayer may seem morbid, indeed harmful to a young child. Look about the gallery walls of the American Folk Art Museum and you will come to understand why Death was acknowledged each long-ago night.

The paintings in Securing the Shadow all portray deceased people, for the most part children. Many of the works are posthumous portraits, painted after the moment of death. Several paintings belong to a second category, begun when the subjects were hale and hearty, only to be finished after Death had snatched them away.

People in early America were well aware of Death - and not just because of the New England Primer prayer.

Well into the nineteenth century, the number of babies born into an American family normally ranged between eight to ten. On average, five of these children would likely die before reaching adolescence. Temperate regions like Pennsylvania tended to be healthier than Tidewater Virginia or bitterly cold New England. Yet sudden outbreaks of disease could strike anywhere. The dreaded Yellow Fever killed 5,000 people in Philadelphia in 1793. In a few short months, half the population of the City of Brotherly Love was wiped out. 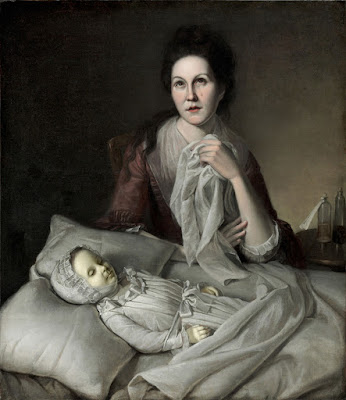 One of the first paintings on view in Securing the Shadow comes from Philadelphia. Charles Willson Peale originally painted this as a solo portrait of his deceased daughter, Margaret, in 1772. Little Margaret died that year of smallpox. Later, during the momentous year of 1776, Peale added the grief-stricken countenance of his wife, Rachel, to the enlarged work.

Rachel Peale had cause to weep. Margaret was her second child to die and a third, Eleanor, died the following year. Mrs. Peale died in 1790 after having give birth to ten children. A year later, Charles Willson Peale married Elizabeth DePeyster from New York who bore him six more children before she died in 1804. Of Peale's seventeen children from the two marriages, six died during childhood. This is an "average" figure for the period.

There are no "average" emotions involved in losing a loved one, particularly a child.

Hiram Powers is chiefly known for his  1844 statue, The Greek Slave, which scandalized many and inspired others. Six years earlier, Powers' first born child died from a brain tumor. The grief-stricken sculptor made a cast of the head of the four year old boy. Some of the eyelashes, eyebrows and hair were embedded in the plaster. 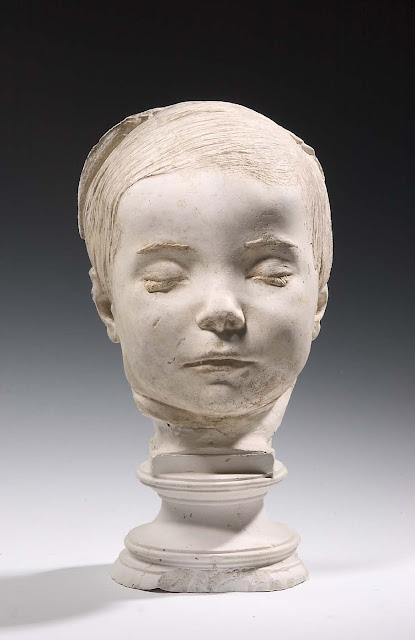 Powers' love for his "Jimmy" was mixed in too. As a result, this plaster cast projects a sense of earthly realism and spiritual immortality that few other works of art in the exhibit can match, poignant and powerful though they are.

And the other works in Securing the Shadow are poignant and powerful. What really sets most of the paintings apart from Powers' cast of his son is a more subtle difference. The posthumous portraits share a coded visual language familiar to the people of the time, but now mysterious to us. 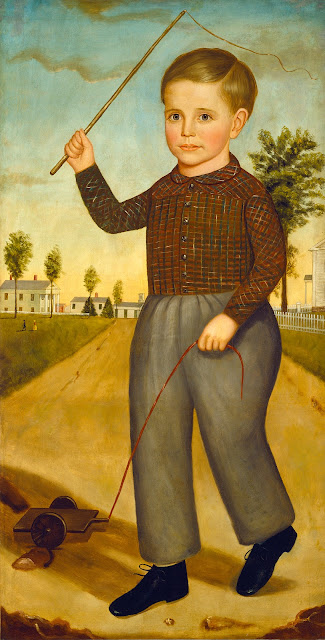 The majority Americans of the pre-Civil War era shared an evangelical Christian heritage. Almost all would have recognized the whip in the hand of young Charles H. Sisson as a symbol of Christ's agony and martyrdom. The New England artist, J.G. Chandler, painted the portrait of Charles H. Sisson, who died on December 8, 1850 aged three years and ten months. The parents of the little boy were indeed martyrs, enduring the deaths of four of their eight children at young ages. 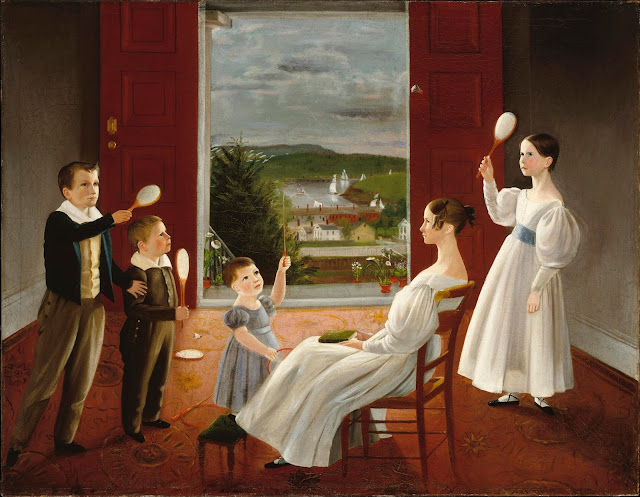 The Children of Nathan Starr seem a much healthier family - deceptively so. The youngest  - a little boy - clad in a gray dress points not at the badminton shuttlecock but toward heaven. Little Edward Starr died in 1835, the year that Ambrose Andrews, an itinerant New England artist, painted this picture.

Stephen Alling, holds a hammer with wooden boards and nails at his feet. This alludes to Christ's death on the Cross in the same way that medieval depictions of Jesus as an infant had done. Young Stephen Alling was just four years old when he died  in 1839. He seems  much more mature in Eddy's painting, just as the little Jesus had been depicted in icons as more of a man than a child. 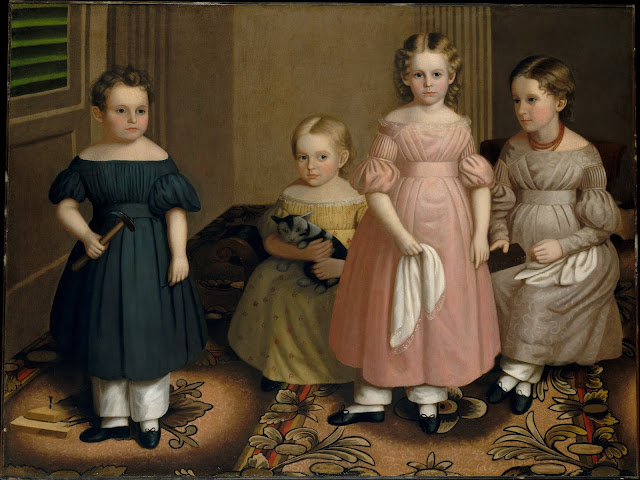 In a final touch, the three sisters of Stephen, Mary, Cornelia and Emma regard their deceased brother with the mournful solemnity of Christian saints like Mary, Christ's mother, and Mary Magdalen at the foot of the cross.

The father of these Alling children was a wealthy New Jersey jeweler. Stephen Ball Alling (1808–1861) could pay for the services of a major artist like Eddy. Most bereaved parents in the U.S, during  the late 1830's, especially after the Panic of 1837, could only afford lesser talents to memorialize their children.

A fairly typical example of these "naive" portraits is Mary and Francis Wilcox by Joseph Whiting Stock. The title of the book on the stole bears the title "Remember Me." The child Mary points toward heaven just as little Edward Starr had done. In a very touching gesture, the actual toys that the two children pose with in the picture, a porcelain doll and a Staffordshire bank, are placed next to their portrait in the Securing the Shadows exhibit. 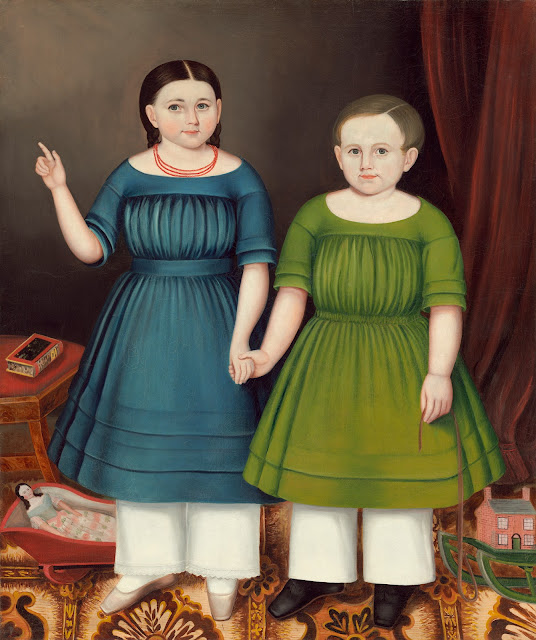 Joseph Whiting Stock's paintings exemplified the "naive" or folk tradition in American art. Stock was also a model of Yankee ingenuity and his journal and account book provide us with detailed records of life and art in early America.

Stock's journal also grimly records the constant reckoning of Death. Some of the entries for commissions read tersely, "Jane Livsey, her daughter from corpse." The joint portrait of Francis and Mary Wilcox was noted  on  February 15th, 1845. "deceased children of P.f. Wilcox."

Other entries in Stock's journal are more emotional. On February 28, 1838, he wrote of the death of a seven year old boy he had painted a few years before:

Eugene B. Sperry who departed this life the 26th inst. at 10 minutes past 1 o clock, A.M. O. Eugene! Thou wast a brave little fellow and generous' But thou art gone to thy happy home to join thy father ...

Stock empathized with the sorrows of those he painted for he was not stranger to suffering. Stock was born in 1815 in Springfield, Massachusetts. In 1826, he was crippled from the waist down when an oxcart fell on him. He took up art and using a specially constructed wheelchair was able to begin a professional career.

Stock was one of the first Americans to make regular use of railroad travel to conduct business, traveling throughout New England and New York to paint portraits. In 1839, tragedy struck again when he was badly burned mixing a batch of varnish. An emergency hip operation to prevent infection saved his life and he quickly returned to his wide-ranging travels. He died, aged 40, of tuberculosis in 1856.

As his life ebbed, the ever-resourceful Stock painted portraits based on daguerreotypes. These early photographs were used by others to record the image of deceased persons and thus were a form of competition to the portraits of the dead that Stock frequently painted. 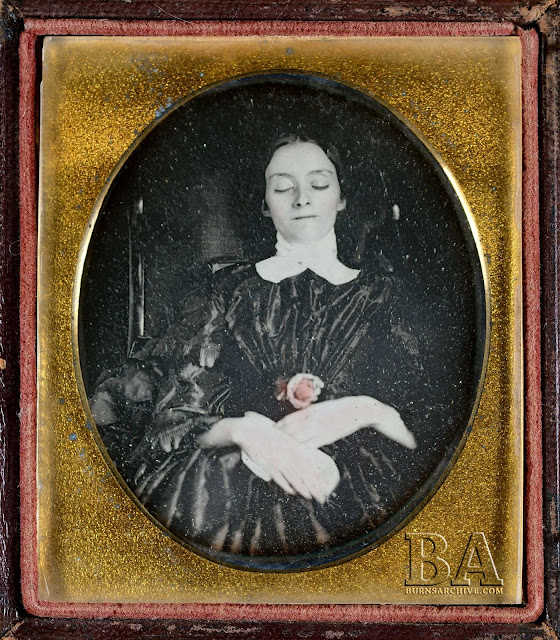 Securing the Shadows presents a special installation of postmortem daguerreotypes from the Burns Archive. Some of the deceased are posed with grieving family members or individually, as in the example included here, with a hand-tinted rose.

Death was so constant a factor of life in early America that the boundary between portraits of the living and those of the dead are sometimes hard to tell. The wonderful, Picking Flowers, which serves as the introductory image to this review is a case in point.

We do not know if this unnamed little girl was painted from life or was, to borrow Stock's journal phrasing, a "daughter from corpse." Yet, she steps on a crushed flower, a cat seizes hold of a mouse at her feet. These are symbols of death. The goldfinch in the branches above the child is a Christian symbol of the Resurrection.

Ultimately, the works of art on view in Securing the Shadow are about redemption. These paintings and photographs preserved an image of the fleeting lives on earth of those who have passed on to immortal life with God in heaven.

The Soul, as these compelling images proclaim, does not perish with the Body.