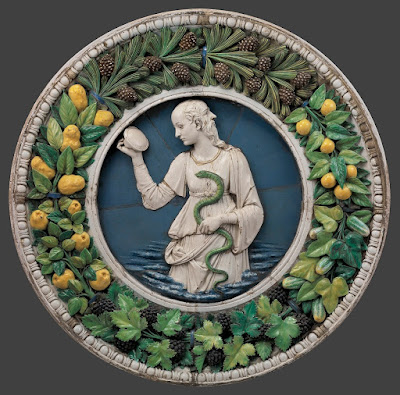 The ancient Greeks believed that the world was created of four basic elements: earth, air, fire and water. To this mix, the Greeks added a mysterious spiritual substance called aether. Modern physics long ago disproved this theory. But when you behold the Renaissance-era sculptures of Luca and Andrea Della Robbia, you might agree with the Greeks.

Della Robbia: Sculpting with Color in Renaissance Florence recently opened at the National Gallery of Art in Washington, D.C. This is the first major exhibit devoted to the Della Robbia art dynasty to appear in the United States. It was planned and presented by Marietta Cambareri, Curator of Decorative Arts and Sculpture at the Museum of Fine Arts, Boston.

Della Robbia: Sculpting with Color is a "must see" event. The National Gallery presentation is the second and final appearance of these Della Robbia treasures. We are not likely to see such a display of them in the United States for many years to come.

For over a century, the Della Robbia family fashioned glazed terracotta statues, portrait busts and bas reliefs. Terracotta is a delightful and descriptive Italian art term, meaning "cooked earth." To the basic elements of clay and fire, the Della Robbia artists seemingly added air and water, as symbolized by their signature blue and white glazes. The resulting sculptures exude a lifelike presence and an ethereal force. 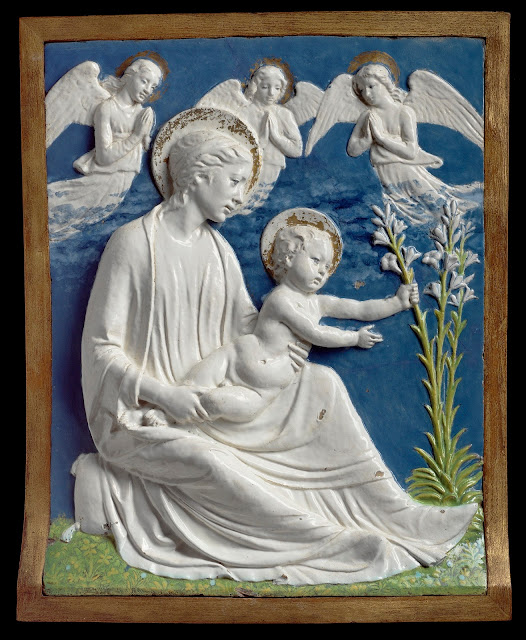 Luca Della Robbia (1399/1400-1482) was born at the turn of the fifteenth century and practiced art for a very long time. He did not start out as a ceramic master but rather trained to be a goldsmith.

Oddly enough, a significant number of the great artists of the Renaissance were apprenticed or studied to be goldsmiths. Filippo Brunelleschi, Sandro Botticelli, Domenico Ghirlandaio and Albrecht Durer all started out as goldsmiths but went on to achieve greatness in other fields of art. So too did Luca Della Robbia.

The goldsmith connection is not just a coincidence. This exacting, meticulous craft demanded of its apprentices skills that later turned them into Renaissance masters of architecture, painting and sculpture. Giorgio Vasari acknowledged this in the account of Luca Della Robbia that he included in his Lives of the Artists:

Nor do I marvel in any way at this, seeing that no one ever became excellent in any exercise whatsoever without beginning from his childhood to endure heat, cold, hunger, thirst, and other discomforts; wherefore those men are entirely deceived who think to be able, at their ease and with all the comforts of the world, to attain to honorable rank. It is not by sleeping but by waking and studying continually that progress is made.

Vasari records that Luca was apprenticed under the greatest goldsmith in Florence, Leonardo di Ser Giovanni. Just when Luca made his move to sculpting we don't know. Incredibly, given his tremendous success with terracotta, Luca first made his mark with sculpting marble. Again, we don't with whom he trained - perhaps it was with Nanni di Banco - but in 1431 Luca was awarded a major commission in Florence and achieved a resounding triumph .

Luca was tasked to carve ten bas reliefs for the Cantoria, the organ loft for the S. Maria del Fiore Cathedral of Florence. The spectacular dome designed by Brunelleschi was nearing completion and decorations and statuary for the interior of the great church were progressing too. Luca's carvings of  singing and dancing children, illustrating Psalm 150, was such a success that the leading Florentine authority on art, Leon Battista Alberti, ranked him in the company Brunelleschi, Masaccio and Donatello.

The stage was set for a rivalry in marble sculpting between Luca and the illustrious Donato di Niccolò di Betto Bardi, aka. Donatello (1386-1466). It never happened.

Soon after the seven years spent finishing the Cantoria panels, Luca unveiled a new glazing process for ceramic art. Luca's revolutionary glaze enabled sculptures modeled from clay to appear to have been made from marble. The new glaze held color too with astonishing vibrancy - except for red, still the most volatile color for ceramic artists to use, all these centuries later. 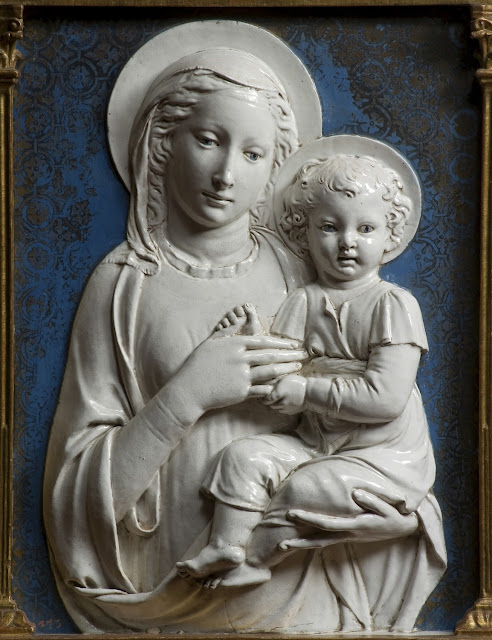 The secret of the glaze was kept within the family. It was only shared with one assistant, Benedetto Buglioni (1459/60-1521), who set up his own workshop. Vasari tells a colorful story that Buglioni filched the glaze recipe with help from a servant girl in the Della Robbia household but that is very unlikely. No "cut-throat" rivalry ever seems to have existed between the two workshops.

The trademark Della Robbia images of Virgin Mary, the Infant Jesus and surrounding angels recall the dancing, singing children of the Cantoria. It does not require much of a leap in imagination to grasp Luca's transition from sculpting in marble to working with terracotta.

Nothing, however, prepares the viewer for Luca's three dimensional figures. This is especially so for the near life-size depiction of the meeting of the Virgin Mary and her older cousin, Elizabeth. The key moment of the Visitation, as this episode is called, occurs when Elizabeth realizes that the youthful Mary is to give birth to the Messiah. This is the dramatic subject of Luca's statue, assembled from several interlocking parts.

Luca's The Visitation is a masterpiece of contrasts, of age and youth, of miracle and reality, of bible history and living faith. The elderly Elizabeth, past her child-bearing years, is soon to give birth to the baby who will become John the Baptist. Her young cousin, hardly more than a girl, has been chosen by God as mother of humankind's redeemer, the Christ. 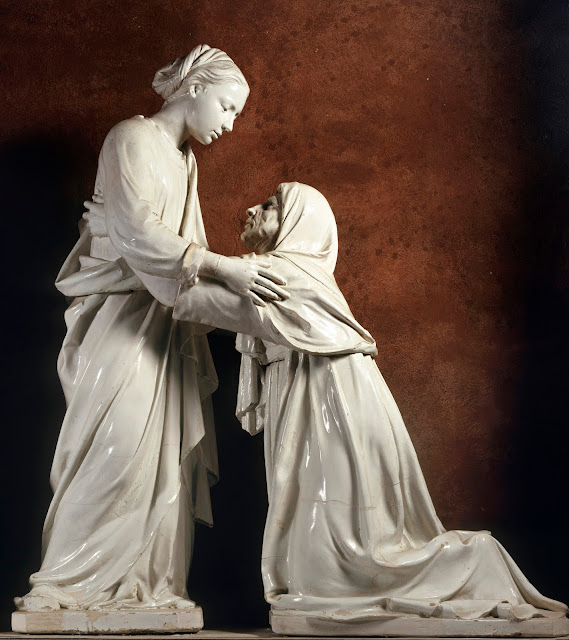 The Visitation is normally displayed in the Church of San Giovanni Fuorcivitas, Pistoia, Italy. It is the first time it has been presented in an exhibition in the United States. Positioned as the center piece of the exhibition, it is actually easier to study at the National Gallery in Washington than in its niche in the church in Pistoia.

The Virgin Mary in this almost impossibly beautiful statue reappears again and again in the glazed terracotta works of the Della Robbia.  A comparison readily springs to mind with the lithe, graceful beauty of Botticelli's mythological women in Primavera. But this relationship is only skin-deep. The Della Robbia artists were devout Christians. Andrea, in fact, was an ardent supporter of the puritanical monk, Girolamo Savonarola, who consigned art works with non-Christian themes to the "bonfire of the vanities."

Very few of the Della Robbia ceramics had secular or non-Christian themes. The allegorical image, Prudence, which serves as the introductory image of this review is very much in keeping with Christian iconography. Prudence holds a mirror of self-knowledge, rather than vanity, with the Janus-like face of the elderly sage testifying to the wisdom of the past. 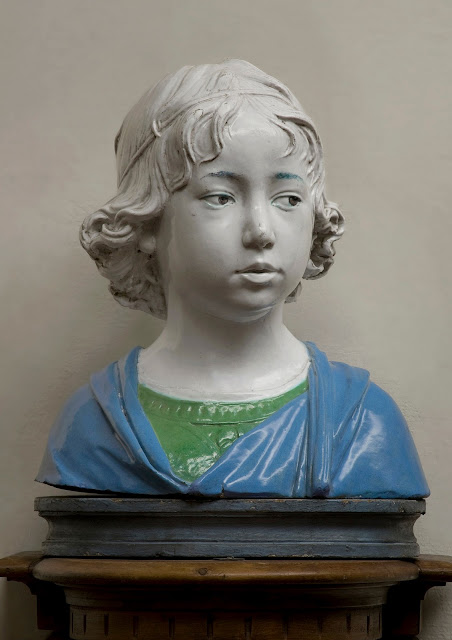 The lifelike quality of Andrea della Robbia's Bust of a Young Boy was obviously modeled on a living person. It was almost certainly intended as a portrait of the young Jesus. Andrea created this around 1475, the same time as he was working on the garlanded roundel of Prudence.

This was the era when pre-Christian philosophical ideas were being embraced by Florentine intellectuals. Chief among these was Marsilio Ficino (1433-1499) who created a new Platonic academy in Florence under the patronage of Cosimo de Medici. But the Della Robbia were such staunch supporters of Savonarola that two of Andrea's sons entered the Dominican religious order.

Andrea, reflecting Savonarola's emphasis on austerity, took the momentous step of modifying the Della Robbia glazing technique. He sought to evoke a more naturalistic skin tone to make the Christian saints, even Jesus, appear as flesh and blood beings. 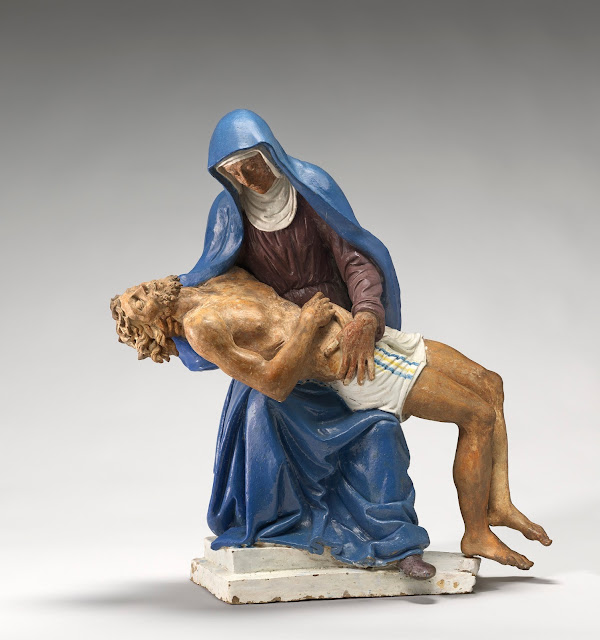 In some of the Della Robbia statues, the skin was left without glaze. The rough terracotta of the Pieta sculpted by Giovanni della Robbia, Andrea's son, at some point between 1510 and 1520, is particularly effective. This conveys Christ's suffering and his mother's anguish to a degree that more polished works with this theme, including Michelangelo's celebrated version, do not.

Santi Buglioni (1494-1576) also utilized the part-glazing technique after he inherited control of the Buglioni workshop from his adoptive father, Benedetto.

In this very accomplished - and affecting - portrait of Mary and Jesus, Santi Buglioni brilliantly used the unglazed surface of the terracotta to emphasize the humanity of Mary and the infant Jesus. Here Mary's face has lost some of the extreme youthfulness depicted in Luca's The Visitation. Mary is still a young woman, but age and apprehension about her son's welfare are beginning to take a toll. 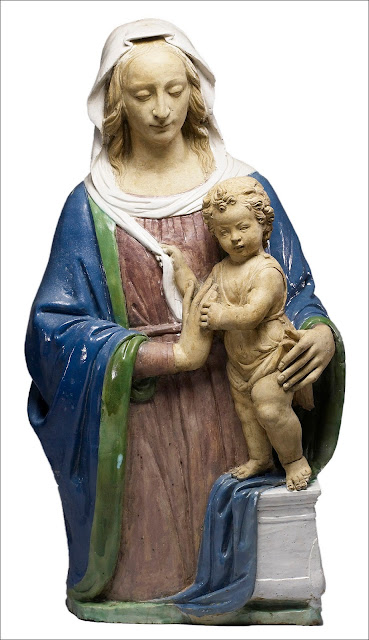 The Della Robbia ceramic statues and bas reliefs became a fixture of Italy and much of Europe during the 1400’s and 1500’s. By the end of the sixteenth century, however, this distinctive art form became a victim of its own success. The family largely died out and the secret of the glaze recipe died with them. Then, during the Victorian era, art scholars like John Ruskin and Walter Pater rediscovered the Della Robbia ceramics.

Over the entrance of the Sculpting with Color exhibit is displayed one of the greatest Della Robbia works purchased by an American. This is Giovanni della Robbia’s multi-part masterpiece, Resurrection of Christ, created in the first decades of the 1500’s. Originally commissioned by the aristocratic Antinori family of Florence, it was bought by the president of the Brooklyn Institute of Arts and Sciences, A. Augustus Healy, in 1898. Healy donated it to the Brooklyn Museum of Art in 1908. 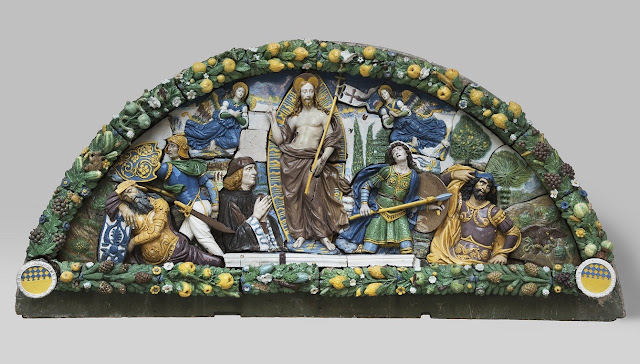 Technically speaking, Resurrection of Christ is a “lunette relief.” On an spiritual level, it is a testament of belief in God’s grace as manifested by the death and resurrection of Jesus.

Initially, this might seem a contradiction. Front and center on the 46-part lunette, next to the risen Christ, kneels the proud Antinori donor. This was likely Niccolò Antinori who purchased the family palace in Florence for “4000 large and heavy florins” in 1506.

One should not be too preoccupied with this act of self-promotion. Niccolò stands in – or kneels – for all humanity.

In this astonishing work of art, the Roman soldiers, clad in fancy armor and contemporary Florentine garb, flee in panic. Niccolò stays and prays. For all his wealth, Niccolò Antinori is like the leper cured by Jesus, one of ten healed, but the only one who remembered to thank God.

In a way, Niccolò Antinori was also a surrogate for Giovanni della Robbia, creator of this magnificent piece, and for Andrea and Luca before him. The Della Robbia were all men of faith, who thanked God with their art.