Treasures from the Nationalmuseum of Sweden: The Collections of Count Tessin at the Morgan Library and Museum 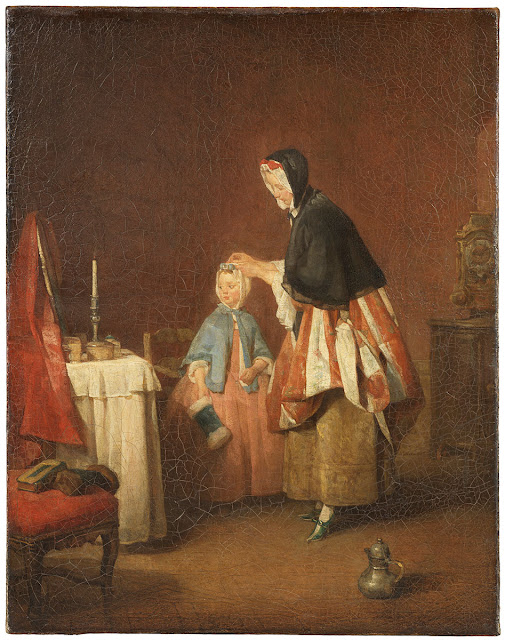 Treasures from the Nationalmuseum of Sweden:

The Collections of Count Tessin

The eighteenth century has come back to life in a splendid exhibition at the Morgan Library and Museum in New York City. Focusing on a special loan from the Nationalmuseum of Sweden, visitors to the Morgan are enabled to grasp the importance of the gentleman connoisseur as the arbiter of the 1700's art scene.

Treasures from the Nationalmuseum of Sweden showcases the collections of eighteenth century oil paintings and Old Master drawings and prints which Count Carl Gustaf Tessin assembled during the 1730's and 1740's. Count Tessin then sold these impressive works of art to the royal family of Sweden. When Sweden's government opened a national museum of art in the nineteenth century, the Tessinsamlingen filled the galleries of the new facility with many of its finest works of art.

During the 1700's, Europe's Age of Enlightenment took hold in the minds of intellectuals like Carl Gustaf Tessin (1696-1770). As a young man, Tessin traveled throughout Western Europe but it was in France, which he visited on four occasions, that he found the greatest inspiration. In 1739, he returned to France as his nation's ambassador with the mission to secure French help to revive Sweden's dwindling political and economic power. Tessin expanded his diplomatic brief to purchase an array of art works to promote a cultural renaissance in Sweden.

This was not just a public-spirited endeavor. Tessin amassed his collection so that he would become a latter-day Medici. From his father, he had inherited the rank of surintendant or surveyor of the Swedish royal palace. Now, as Sweden's emissary to Versailles and a devoted patron of the arts, he could make his own mark. In the portrait he commissioned while in France, we see him surrounded by all the trappings of the realm of high culture. 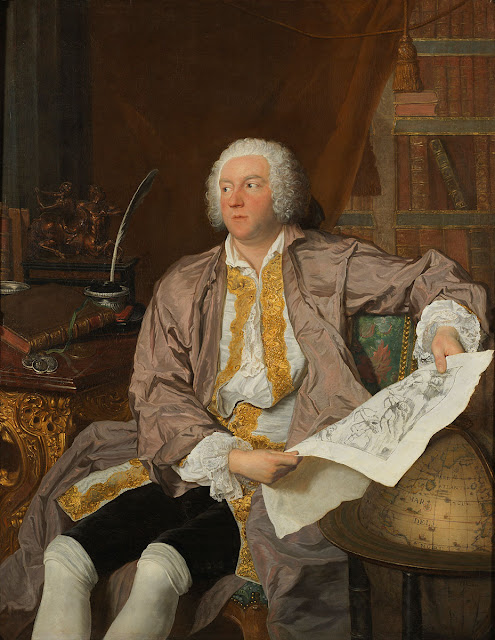 Tessin's portrait supplies one of the more humorous elements in the exhibit. Tessin was Sweden's "unofficial" ambassador to France and, perhaps to make more of an impression, spent lavishly, dipping into his own resources. When it came to having his portrait painted, Tessin tried to save money by picking a more affordable artist, Jacques-André-Joseph Aved (1702–1766), rather than one of the "grand manner" masters like Hyacinth Rigaud.

Aved succeeded in presenting Tessin as a man of the Enlightenment, carelessly dressed but absorbed in his intellectual pursuits. But the painting sessions dragged on so long that Tessin's finances were just as strained as if he had commissioned Rigaud.

Tessin was indeed an Enlightenment intellectual. If not a philosophe of the caliber of Voltaire, he had a discerning intellect and the gift for cultivating the best artists and scholars of his time. He met the brilliant, ill-fated Watteau on a early trip to France and later added a number of Watteau's superb sketches to his collection, including this appealing  study of a young woman's head from four different angles. 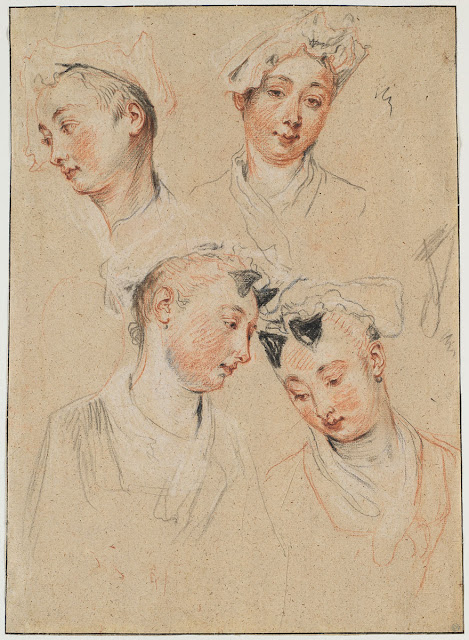 Tessin also displayed the good taste and even better sense of befriending the long-lived master of genre painting, Jean Siméon Chardin (French, 1699–1779). Tessin purchased several of Chardin's works, including The Morning Toilette, the introductory work of art for this review.

The Morning Toilette is one of the masterpieces of this wonderful artist, whom Kenneth Clark regarded as the "greatest painter of mid-eighteenth century France." The Morning Toilette was selected as an illustration for Civilization and it is worth quoting Clark's astute observation about Chardin:

Chardin's pictures show that the qualities immortalized in verse by La Fontaine and Moliere - good sense, a good heart, an approach to human relationships both simple and delicate - survived into the mid-eighteenth century...

It is significant that Clark noted qualities connecting Chardin to cultural masters of the seventeenth century. Tessin, as we shall see, possessed the same ability to grasp the merit of works of art from the 1600's. But Tessin was also an eighteenth century man of affairs. The oil paintings in which he took the greatest pride in collecting were not works by Chardin but "eye candy" by masters of the Rococo style like François Boucher.

Boucher (1703–1770) created a sensation at the Salon of 1740 with his mythology-themed, The Triumph of Venus. Tessin simply had to have it, even though his finances were starting to suffer, and it was the toast of his collection when he returned to Sweden in 1742. 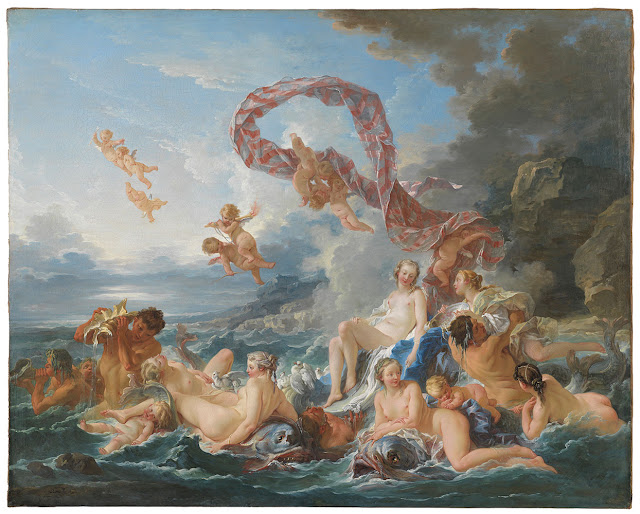 François Boucher, The Triumph of Venus, 1740

The Triumph of Venus is a technically accomplished painting, recalling Botticelli's Birth of Venus. It, however, is almost completely devoid of "good sense, a good heart, an approach to human relationships both simple and delicate."

Of course, taste in art changes over the centuries. The eroticism of this painting must have seemed potent indeed to Count Tessin and his colleagues back in Stockholm. Triumph anchors the exhibit at the Morgan, and, initially at least, exerts a striking presence in the gallery. But the longer one studies Boucher's magnum opus the more unappealing it becomes, like a rich dessert after a heavy meal. 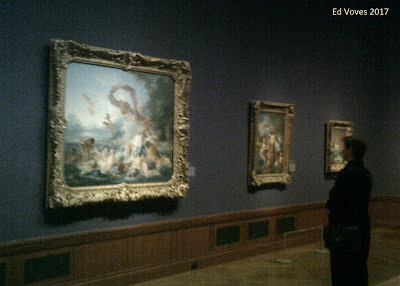 Boucher's genre scene, The Milliner, is a much more compelling work. It evokes to perfection the ideal of life in France during the 1700's, le douceur de vivre. Yet the effect is the same as with The Triumph of Venus. There is simply too much sweetness in this picture when the lives of the majority of the French people were marked by grinding toil and the loss of loved ones in the endless, futile wars of the age. 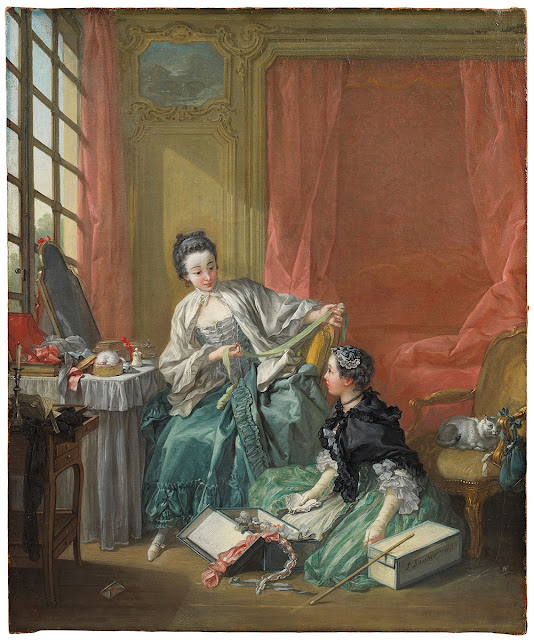 In 1749, only a few years after returning home, Tessin was forced to sell most of his paintings, including The Triumph of Venus, to King Frederik. As surintendant of the palace, Tessin would have had ready access to his former collection, a measure of compensation.

Tessin would have been better advised to spend his money on less glamorous, less pricey purchases. To his credit, when opportunity arose to buy works of truly enduring value, Tessin did not hesitate. This occurred in 1741 with the auction of the vast collection of drawings owned by Pierre Crozat, who had been Watteau's great patron.

It is these works by Durer, Rembrandt, Watteau and others that are truly treasures from the Nationalmuseum of Sweden.

Rembrandt is represented by an impressive array of works ranging from a heart warming study of a woman teaching a child to walk to a vigorously sketched depiction of Three Thatched Cottages by a Road. This country scene, free of allegorical references, could be displayed next to a landscape drawing by Vincent van Gogh - to their mutual advantage. 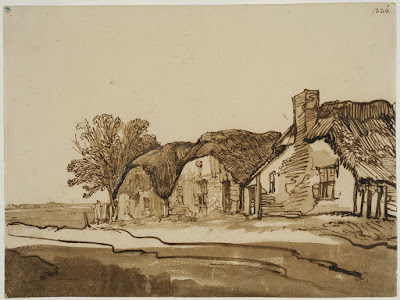 The quality and diversity of the works on paper collected by Count Tessin are astonishing. Drawings in graphite, charcoal, ink, chalk, pastel and the "pencil" of watercolor demonstrate the range of accomplishment of seventeenth century artists that is often obscured by the mighty achievements in oil painting by titans from Caravaggio to Vermeer.

Conversely, the ability in drawing by the eighteenth century artists favored by Tessin is also notable. Watteau's exceptional facility in sketching needs little comment here. A lesser known contemporary of Watteau, Antoine Coypel (1661-1722) is represented by a portrait sketch of a young woman model, so lively, so sparkling with intelligence that her penetrating gaze literally drew my attention from across the gallery at the Morgan. 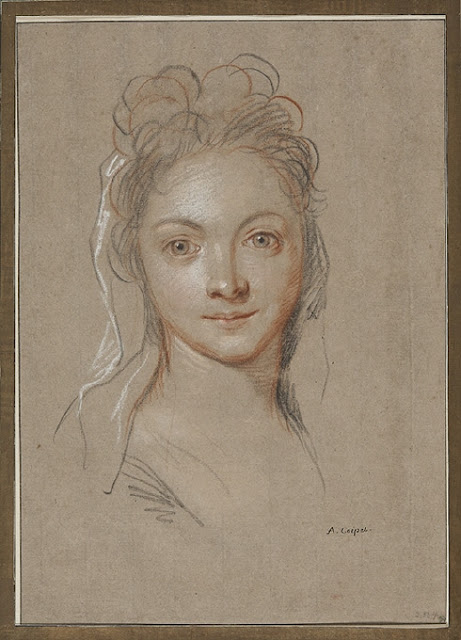 This outstanding portrait sketch was one of a series of studies. From these, Coypel could select  the head of the Virgin Mary or of Venus, depending on the subject of his current painting. Coypel was a "history" painter, for which one should read "allegory." There are none of his oil paintings in the Morgan exhibit. This is just as well, for his works in oil are didactic and overwrought. But with this portrait of a young woman, created with chalk and pastel, Coypel succeeded brilliantly.

Why the visual arts of the Age of Reason were so marked by the glaring contrast between acutely perceptive sketching and frivolous, saccharine painting is one of the mysteries of the Enlightenment.

That Tessin could dip into his dwindling resources to purchase one of Durer's supreme masterpieces, Portrait of a Young Woman with Braided Hair, is, however, a testament to his passion for art. 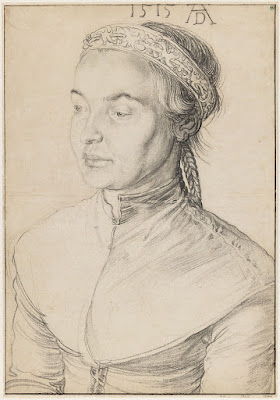 Albrecht Dürer, Portrait of a Young Woman with Braided Hair,1515

Surveying the incredible range of his collection, one gets the sense that these works of art held a deeper meaning for Tessin than merely serving as mementos of his travels. Rather, l think these paintings and sketches were surrogates for the relics or devotional art works that Tessin would have acquired had he traveled about Europe a century or two earlier.

By 1700, pilgrimages to Christian shrines were being replaced by the Grand Tour. Europe in the eighteenth century was entering a secular age, but idealists like Tessin were still searching for nobility, still looking for meaning and for works of art to express this yearning.

Antoine Coypel, who was a cultural theorist as well as an artist, urged his fellow artists to undertake this spiritual quest as well. Painters, Coypel wrote should "express those sentiments and movements of the soul which rhetoric teaches are necessary if we wish to be heard by all the nations of the earth." 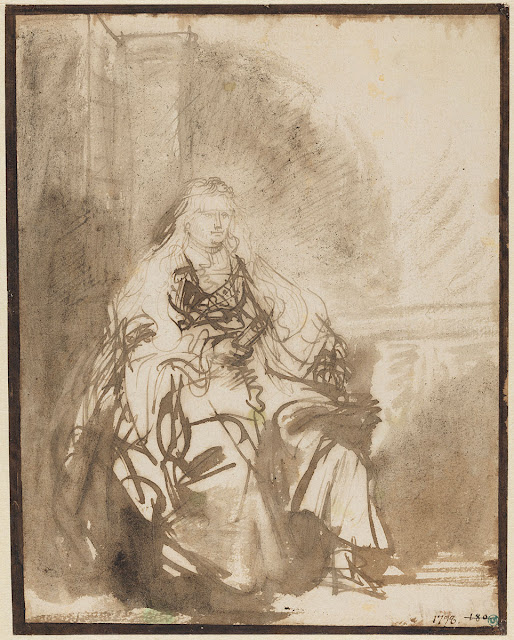 Rembrandt, Study for the Figure of Esther in The Great Jewish Bride,1635

Count Tessin continued his impressive diplomatic career upon returning to Sweden, as well as becoming the leader of the Riksdag, Sweden's parliament. Tessin advanced to the rank of President of the Chancellery or prime minister, which he held from 1746 to 1752, and served as tutor to the heir to the throne.

Tessin's brilliant career came to a sudden halt when he tried to preserve the Riksdag's independence from royal control. He retired to his estates and died in 1770. The prince he tutored absorbed Tessin's passion for the arts but not his belief in political liberty.The year after Tessin died, Gustavus III launched a reign marked by cultural patronage and authoritarian politics. Gustavus was assassinated at a masked ball in 1792 as the radical spirit of the French Revolution reached northward to Sweden.

Tessin's artistic legacy can be witnessed in the outstanding exhibit at the Morgan. It is a testament to the cultural contribution that a single, enlightened human being can achieve. Three centuries later, the "sentiments and movements of the soul" of Count Carl Gustaf Tessin are still making their presence felt.

Ed Voves (2016), Gallery view of Treasures from the Nationalmuseum of Sweden:
The Collections of Count Tessin, showing The Triumph of Venus by François Boucher, 1740.