A World of Emotions: Ancient Greece 700 BC – 200 AD at the Onassis Cultural Center New York City 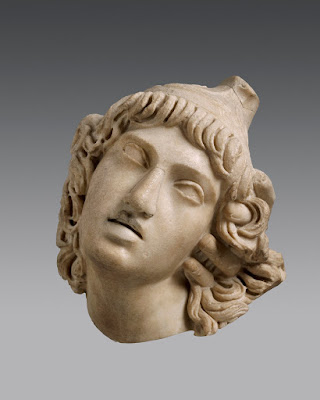 "Know thyself." "Gnothi seauton" (γνῶθι σεαυτόν).  This maxim, inscribed in the forecourt of the Temple of Delphi, proclaims the philosophical aspirations of the ancient Greeks.
Intellectual exploration did not entirely define the lives of the Greeks - any more than it does the lives of modern-day individuals. A fascinating exhibition at the Onassis Cultural Center in New York City examines Greek civilization from a different vantage point: emotion.

A World of Emotions: Ancient Greece 700 BC – 200 AD brings a wide-ranging array of works of art and artifacts to the mid-town Manhattan gallery of the Onassis Center. 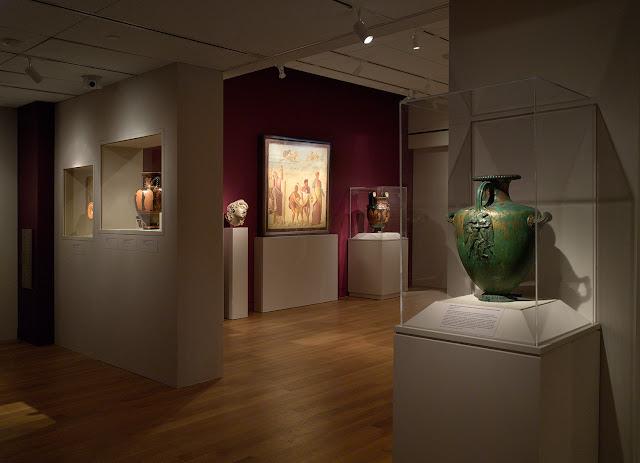 Most of the exhibition objects are loans from Greek museums and chart the evolving attitudes of the ancient Greeks to the interplay of emotions. Other works come from Greek-speaking cities in southern Italy or are Roman-era copies of statues made by famous artists of the Greek past.


In a brilliant move, the curators of A World of Emotions created a grouping of statues as was often done in antiquity. The statue in the foreground, Pothos, is the daimone or spirit of yearning. Pothos is about to be hit by an arrow from the bow of Eros, the god of love. 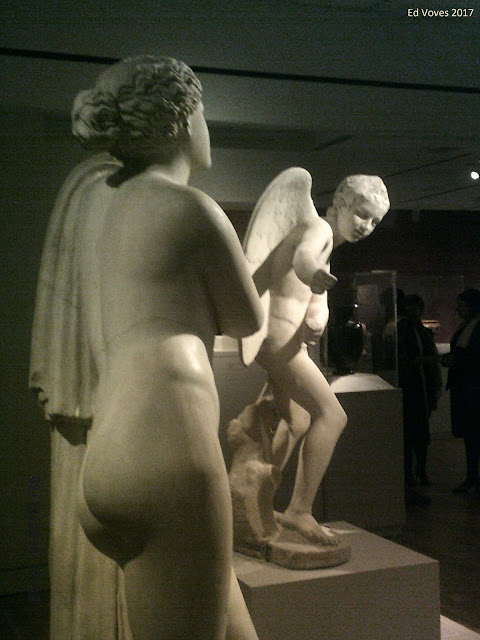 This splendid representation of Eros is believed to be a copy, made about 70 years after Christ, of a bronze by the master sculptor, Lysippos who lived in fourth century BC. It was found at a different site in Rome than the place where Pothos was unearthed. Yet, the grouping of these two works is a masterful interpretation of the more playful aspects of emotion in the Greek world.

Emotion among the Greek, or Hellenes as they called themselves, was more often blood-chilling than heart-warming. Indeed, the most significant work in all of Greek literature begins with an evocation of unrestrained anger.

The first word of Homer's Iliad is menin, rage. This uncontrollable anger, the wraith of Achilles, resounded throughout antiquity. From Alexander the Great's heedless murder of his friend, Cleitus, who had saved his life in battle, to curse tablets which were commonly used in ancient vendettas, the Greeks often strayed from the path of reason.

Fortunately, Greek life and art was  balanced  by the practice of more positive traits and virtues.  Upon entering the A World of Emotions exhibit, visitors are greeted two marble statues from the sixth century B.C. known as Kourai. These two sculptures from the Archaic era preceding the Persian Wars exude emotional well-being. 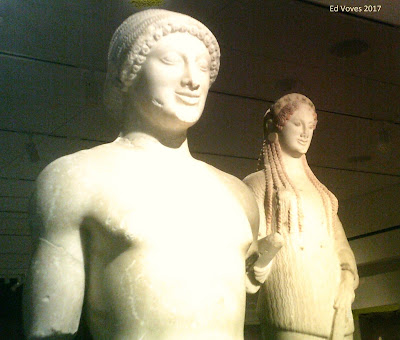 Ed Voves Photo (2017), Gallery view of A World of Emotions

For me, it was like meeting old friends. Last autumn, I had seen the heroically nude kouros and the kore, with her dangling braids, at a spectacular exhibit at the National Geographic Museum in Washington D.C. I had visited The Greeks: Agamemnon to Alexander the Great too late in the exhibit's run to post a review. Yet, here were the kouros and kore to welcome me to A World of Emotions!

Greek sculpture was influenced by the statues which Greek merchants and mercenary soldiers saw in Egypt, beginning around 850 BC. The enigmatic smile of the kourai has counterparts in Egyptian sculpture and amazingly appears on statues at medieval cathedrals like Chartres in France and Magdeburg in Germany.

For the Greeks, the "Archaic" smile denotes self-awareness and a sense of connection with the gods. We can see a growing confidence on the face of this kouros, which dates to 510 to 500 BC, exactly the years when democracy in Athens was gaining political favor. By contrast, the great kouros in the Metropolitan Museum presents a more determined, yet more fearful, visage. The Met's kouros dates to 580 BC and was used as a monument for a young aristocrat's grave. That era, the early sixth century,was a time when ruthless oligarchic power and debt-slavery were ripping Athenian society apart. 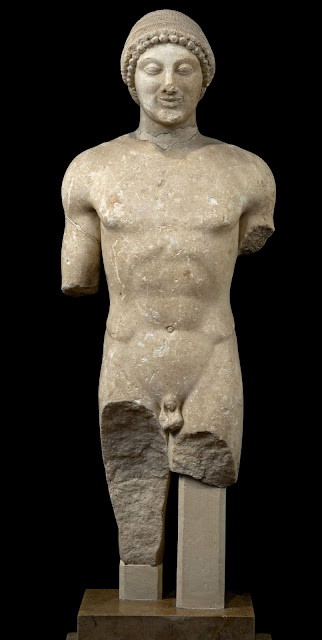 Statue of a Kouros, ca. 500 BC, © Hellenic Ministry of Culture and Sports,
Photo by Kostas Xenikakis

By the time that this beaming, confident kouros was created, Greek democracy was on the rise.

Maybe I am just old-fashioned but I favor Archaic-era statues over the later Classical period. I especially love the fact that they were painted with garish colors, thereby confounding the theories of Age of Reason scholars who praised them for their "pure" natural color. Traces of dark red can easily be seen in the hair of the kore on view in the exhibition. The kore's necklace, bracelet and earrings were painted blue and a crown of gilded copper-alloy flowers once graced her head.

Placed on a pedestal on the Acropolis, the beautiful, decorative kore assumed the "proper" place for women ordained by the aggressively male society of ancient Greece. A women who ventured beyond the role of homemaker or hetaerae prostitute risked being viewed as a latter-day Medea, the mythological character who rebelled against male oppression and betrayal.

Many of the most fascinating works of art in the exhibit relate to women, so often excluded from a political role or even an artistic career in Greek society. A brilliant fresco from the House of the Tragic Poet in Pompeii illustrates depicts the Sacrifice of Iphigeneia. In this story from the Trojan War cycle. Agamemnon must sacrifice his beloved daughter, Iphigeneia, to placate the gods or his stalled armada will not be able to sail to attack Troy. 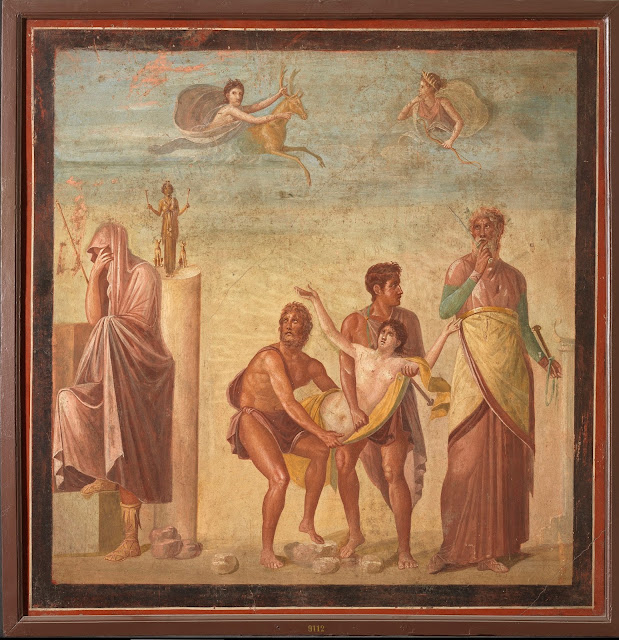 Wall Painting with Scene from the Sacrifice of Iphigeneia, ca. 62 AD
© Archeological Museum of Naples

Evidently, this outrageously unjust act was too much for even the Greeks to tolerate. Later versions of the story changed the ending, with the goddess Artemis bringing a deer to be slaughtered in place of the innocent Iphigeneia. This recalls the similar, happy, conclusion of the story of Abraham and Isaac in the Old Testament.

It is doubtful that the change in the story of Iphigeneia was influenced by the Hebrew scriptures. More likely, it reflected the effect of the endless wars which plagued the Greek world. By the time that this fresco was painted in Pompeii, only a few short years before the eruption of Vesuvius in 79 AD, peace had been imposed by the Romans. Most Greeks were glad of it. The reprieve of Iphigeneia, pictured here, is in keeping with the Pax Romana but not of the blood-thirsty spirit of the Greeks earlier in their history.

To mourn for those slain in warfare was in fact one of the few public roles of women in Greek society. They certainly had plenty of occasion to do so. 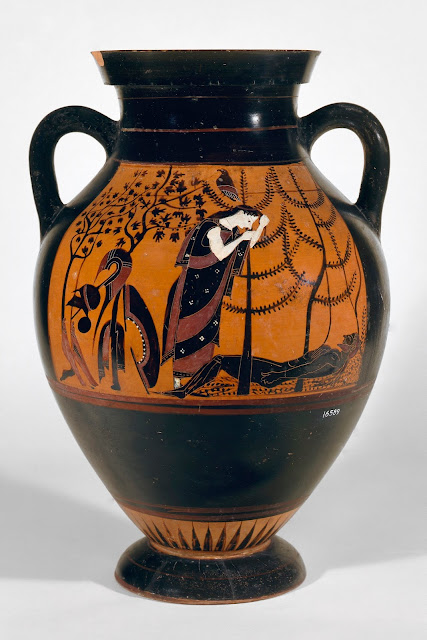 The poignant and timeless image on this black-figure painted Amphora was painted around 530 BC. This was the era when Sparta gained military ascendancy over much of Greece. The woman mourning the dead warrior is most likely Eos, or Dawn, grabbing a hank of her hair as she grieves for her son, a victim of the wrathful Achilles at Troy.

But separating mythology from human actions in Greek history is not always easy. The woman shown here might well have symbolized a mother from Argos convulsed in grief after the Spartan victory in the Battle of Champions in 546 BC. Or the scene could have occurred two centuries later following the Battle of Chaeronea in 338 BC when the armies of Athens and Thebes were decimated by King Philip of Macedon and his Achilles-like son, Alexander. There were lots of battles, plenty of sons to mourn.

The motivations that impelled the Greeks to engage in self-destructive wars and other (to us) irrational acts were actually based on a strict code of ethical conduct. The catalog to A World of Emotions has several compelling essays which provide crucial insights into the psychology and social factors that governed Greek behavior. Professor Angelos Chaniotis, the lead scholar of the curatorial team, summarizes these insights.

A public life free of emotions has never existed, in any past society... As regards ancient Greece, certain features of Greek society and culture enhanced the part played by emotions in public life: the spirit of competition (agon) that characterized Greek culture, the importance of family and the duties connected with it - especially the duty to avenge an act of injustice or an insult against a relative or an ancestor - social values, such as an advanced sense of honor and shame, and the obligation to show gratitude for a favor and repay it (charis).

Along with place of emotion in public life, there was what another of the exhibit scholars, Anthi Dipla, calls the "private spaces of emotions." Here the differences between ancient and modern world views largely disappear. For in these personal, interior realms, care, concern and grief for spouses, children, soul mates, even pets were addressed.

Greek parents often erected a statue to a child, happily saved from disease, to thank the gods for the young one's preservation. There is one of these in the exhibition, dating to the third century BC. The statue of a little boy holding a goose was dedicated in the sanctuary of the river god, Kephisos, in central Greece. 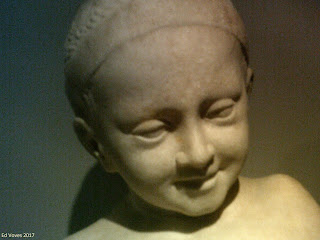 Perhaps the boy was saved from drowning. Whatever the case, the ability with which the sculptor has captured the smiling boy's sense of well-being is little short of a miracle of art.

More often, parents would have to erect funeral stele with heartbroken inscriptions. A particularly poignant one is on view in World of Emotions, which records the devastated feelings of parents when their only daughter, named Zoe (the Greek word for life), died,while delivering a still-born baby around 200 AD. 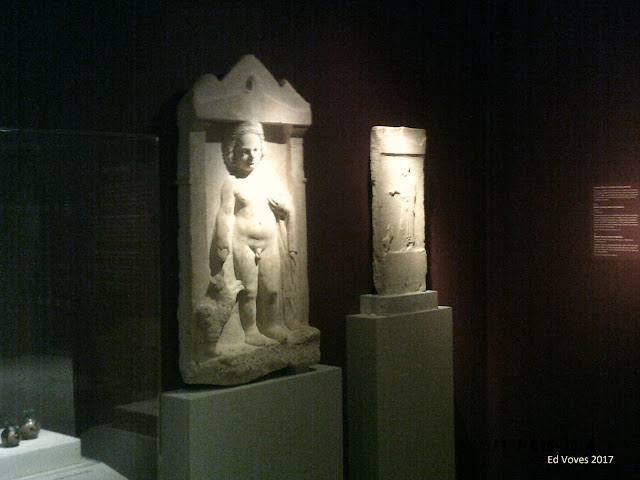 Not far from the monument to Zoe are other memorial steles, this time with sculpted depictions of deceased young boys. At the foot of each is a leaping, playful dog. I stood before these statues, of Kalliteles and Polyeuktos, and briefly lost track of time. I was still grappling with the impact of reading the translation of Zoe's memorial. Trying
to focus on the historical and aesthetic details of these poignant monuments was difficult, if not impossible.

The emotions, the raw feelings displayed in the Onassis Center gallery, are what matter.

It is with a lingering sense of shock that one realizes that these ancient emotions still resonate today. We observe the skillful ways that Greek artists evoked a feeling or depicted a sentiment. But such technical details are only a part of the World of Emotions exhibit.

What is really occurring at the Onassis Center, I believe, is a psychic or spiritual "event."  The emotions sculpted in marble or painted on clay have passed beyond the sphere of art criticism and have attained a form of immortality. This is what is displayed on the walls of the Onassis Center, ingrained into something harder and more lasting than stone.

Ed Voves, Photo (2017), Statue of a Boy with a Goose, 3rd Century BC (detail) from the collection of the National Archeological Museum, Athens. Exhibit at the Onassis Cultural Center, New York City, March 9 to June 24, 2017.