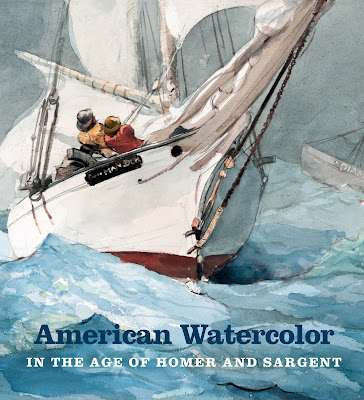 American Watercolor in the Age of Homer and Sargent

In the world of art, as in the course of everyday life, it is wise to expect the "unexpected."

The latest blockbluster exhibit at the Philadelphia Museum of Art, American Watercolor in the Age of Homer and Sargent, is a case in point. For once, this is not just the case of using name recognition to "sell" the show. Both Winslow Homer and John Singer Sargent were true masters of watercolor painting. But neither artist played a pioneering role in America's enthusiasm for watercolor painting that began in 1866.

Before the Civil War, watercolor painting in America was deemed to be acceptable only for Sunday-afternoon artists and women. It was hardly  the "stuff" of Yankee manhood or the valor that  won the day at Gettysburg.

The Union had waged  the Civil War with ruthless determination and technical expertise.  Once the shooting stopped, the expectation was high that these traits would carry over into other aspects of American society. The important role of technology should  have sparked a mania for photography, which had played a big role in the war. Likewise, the intense patriotism should have prompted a wave of battle paintings or works to honor the martyred Abraham Lincoln.

Nothing of the kind happened - at least not in 1866. Instead, a group of little known artists launched what soon became a nation-wide mania  for watercolor painting and collecting.

The founders of the American watercolor revolution were hardly household names - then or now.  Samuel Colman, Gilbert Burling, William Craig and William Hart were certainly proficient artists. The exhibit displays works by all, with the exception of Burling. These painters were heavily indebted to the British watercolor tradition and to the writings of its leading theorist, John Ruskin. What they lacked in the way of originality, these pioneers compensated for with persuasive charm and crusading zeal. 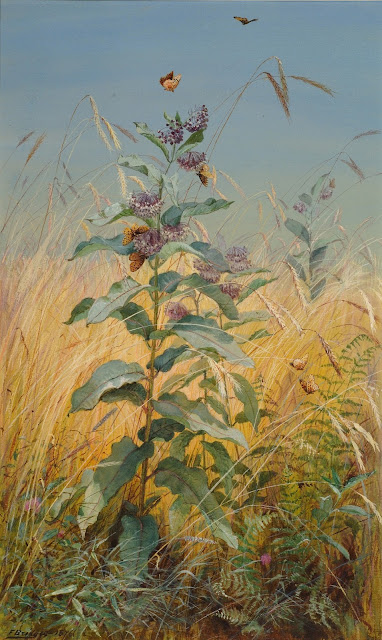 The influence of Ruskin on American watercolor painting is exemplified by the work of Fidelia Bridges, (1834-1923). A New England artist who studied at the Pennsylvania Academy of Art, Bridges painted "truth to nature" watercolors of such outstanding merit that she could not be denied a prominent place in the burgeoning watercolor movement - despite being a woman.

The new popularity of watercolor quickly led to the organization of a professional society. Colman was elected president of the American Watercolor Society in 1866. A year later, the organization mounted a successful show at the National Academy of Design, which became an annual event of great popularity.


Soon first-rank artists like John LaFarge were answering the call to exhibit at the AWS shows in New York City. Sales revenue - the greatest inducement of all - kept pace with Colman's congenial, alliance-building leadership.

In 1873, the greatest war artist of the Civil War, Winslow Homer "discovered" watercolor. Only the year before, Homer had painted his hugely popular tribute to American children, Snap the Whip, in oils. Snap the Whip is a nostalgic work of art. Wistful reflection on pre-industrial America was a keynote of many works by AWS painters, too.

This backward-glance is beautifully represented in the Philadelphia Museum exhibit by Edwin Austin Abbey's The Two Sisters. The two protagonists of this astonishing watercolor are dressed in  the early nineteenth century Federal period style. Abbey combined translucent watercolor and opaque gouache to create a work that is suffused with subtle color. 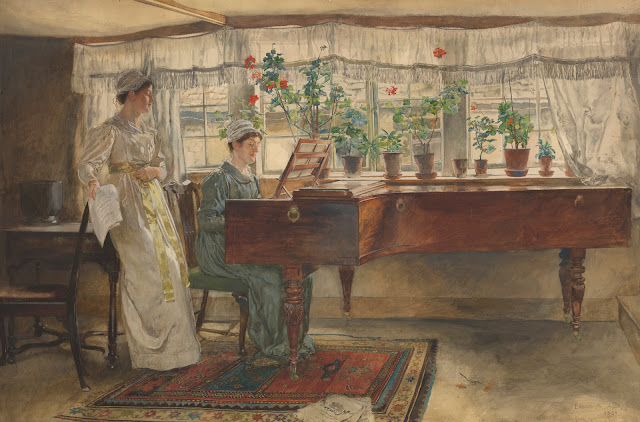 This vibrant work of art, on special loan from Yale, is so delicate and light-sensitive that it is kept behind a curtain at the exhibit except when being viewed for very short periods by visitors. The damaging effect of light on watercolors can only be thwarted by extreme care. Because of this, opportunity to take gallery photographs was limited at the press preview.

Abbey's effective use of translucent and opaque watercolor was rivaled by another AWS stalwart, Thomas Moran (1837‑1926). Born in England, Moran was a great admirer of J.M.W. Turner, sometime to such a degree that it is difficult to distinguish their works. Moran took a lead from the hardy, well-traveled Turner and brought his watercolor box along  on an expedition to the American West soon after the Civil War.

In a way, Moran's Big Springs in Yellowstone Park, 1872, recorded a frontier that was fast disappearing, just as Abbey's genteel Federal period had vanished. Moran's depictions of the West, both in watercolor and in oil, played a major role in promoting the idea of National Parks to preserve the natural beauty of America. Moran also pointed the way for Winslow Homer to make his mark in watercolor.

Homer, "the always unexpected Mr. Homer" as a reviewer called him, followed the lead of both Abbey and Moran. He painted both pensive young women and barefoot country boys and the frontier-like conditions of Maine and the Adirondack Mountains in New York. But his style was all his own and it was not long before he was recognized as America's premier painter in watercolor. 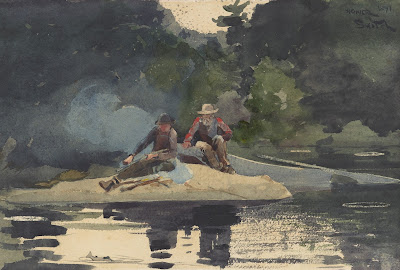 Not all the reviews of Homer's work were glowing. Homer did not take kindly to negative criticism in the proliferating journals like Scribner's Monthly. Some years, he refused to send any work to the AWS shows. Instead, he would paddle-off into the woods of New York and New England, building a "smudge" to keep the vociferous flies at bay - along with the art critics.

Other years, Homer would seek artistic refuge on the North Sea coast of England, where he painted watercolors of stalwart fisher folk, or go to the tropics where he painted the luminous A Garden in Nassau in 1885 . 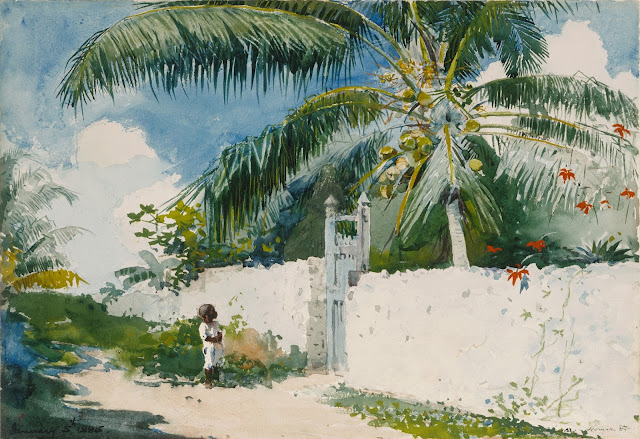 Homer's facility in every form of watercolor and in every setting was matched by John Singer Sargent. Twenty-years younger than Homer, Sargent joined the exhibiting ranks of the watercolor fellowship somewhat late in his career, though he had always painted privately in the medium.

Weary of the "grind" of society portrait painting in England, Sargent "went public" in 1904, just a few years before the still vigorous Homer died in 1910. One of Homer's last watercolors, Diamond Shoal, proves that he was still at the top of his form in his last years. Had Homer not died in 1910, a "duel" in watercolors with Sargent might well have ensued. The Philadelphia exhibit devotes an entire gallery to a "compare and contrast" examination of the watercolors of Homer and Sargent. It is very intriguing but there is no record that either artist viewed their work in such a competitive spirit. It was much more of a case of "passing the torch" of artistic leadership from one master to another.

Sargent did more than keep the golden age of American watercolor going into the twentieth century. His bold use of translucent watercolor to explore the ever-changing quality of light raised the medium to a new, almost miraculous, height of achievement. 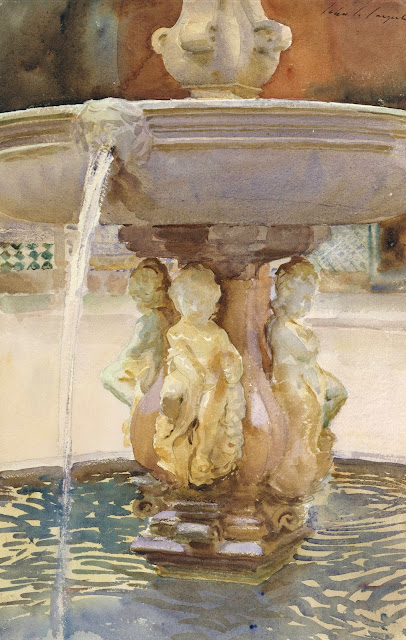 It is only fitting, when mentioning superlative achievement, to acknowledge the curator of this fabulous exhibit, Kathleen Foster. One of the greatest contemporary authorities on American art, Dr. Foster conceived and organized American Watercolor in the Age of Homer and Sargent. She wrote the text of the exhibit catalog in its entirety, a most impressive achievement. Most exhibit books are written by a team of scholars.

Dr. Foster's achievement is definitive not merely for the depth of her research but also its wide-ranging field of study. The "Golden Age" of American watercolor embraced the  Aesthetic Movement of the 1870s, design for commercial enterprises like the celebrated Rookwood Pottery, the "house beautiful" ideal and the American mural movement. All of these strands are woven into an exhibit which will not soon be topped for its authoritative scholarship and its sheer, soul-restoring beauty. 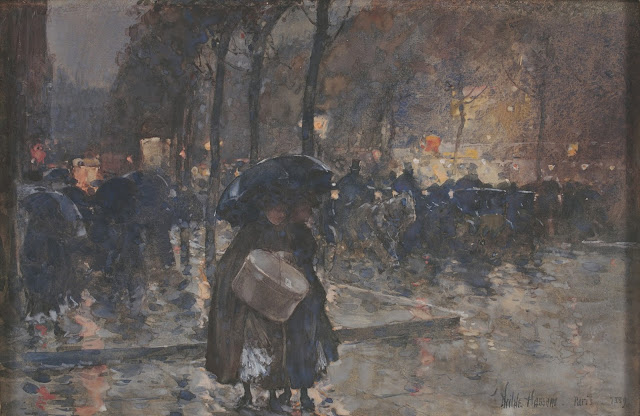 Eventually Childe Hassam, an American Impressionist and an accomplished watercolor painter, united the two schools of art with outstanding works in watercolor. 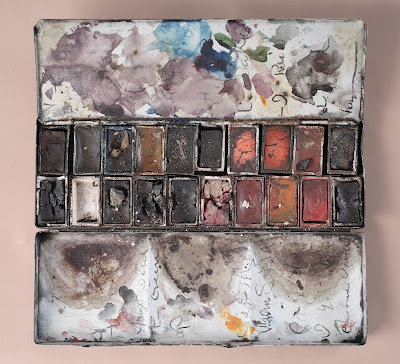 John Singer Sargent died in 1925, the end point of this wonderful exhibit. Vast changes were in store for American art in the years following 1925 - and for American society.

Watercolor, however, has retained its popular appeal with the public and with professional artists alike. Watercolor became an American Art just as Baseball became America's game. Rising from English roots, watercolor was utilized in the post-Civil War years to create a truly national art form. Since then, watercolor has never gone "out-of-style" in America, however much the styles of art change and evolve.