Age of Empires: Chinese Art of the Qin and Han Dynasties at the Metropolitan Museum of Art 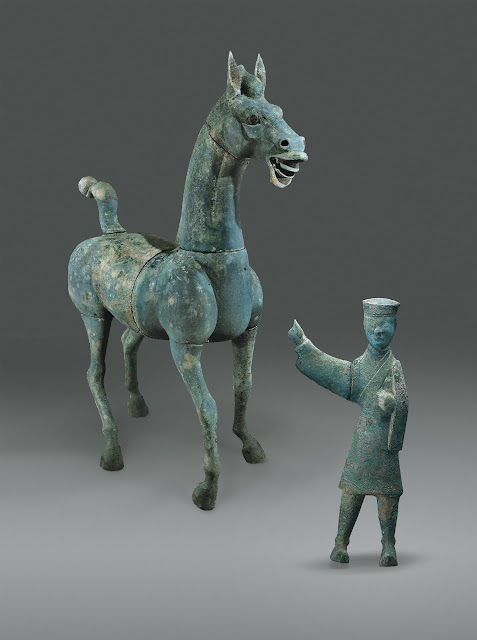 Age of Empires: Chinese Art of the Qin and Han Dynasties

China during the era of the Qin and Han Dynasties (221 B.C.–A.D. 220) experienced a "classical" age of artistic and intellectual achievement that forever influenced the character of Chinese civilization. The current exhibition at the Metropolitan Museum of Art, Age of Empires, does justice to this pivotal period of China's past - though not quite in the way I expected.

The headline-grabbing objects in Age of Empires are several of the life-sized terracotta soldiers and court officials found in the tomb of Emperor Qin Shi Huang, the "First Emperor" of China. Qin Shi Huang conquered and united China's six "warring states" and then built himself a tomb complex where he was buried in 210 B.C.

In 1974, this burial site was accidentally discovered. The terracotta statues of the First Emperor's  retinue began to be unearthed. Each was a unique individual, with facial features that testify to the character of the soldier or courtier who was depicted. It was an astonishing discovery and when a statue like the Kneeling Archer on view at the Metropolitan is examined, the experience is a revelation.

It is impossible not to be impressed by the Kneeling Archer and his compatriots. Impressed - but strangely not inspired. 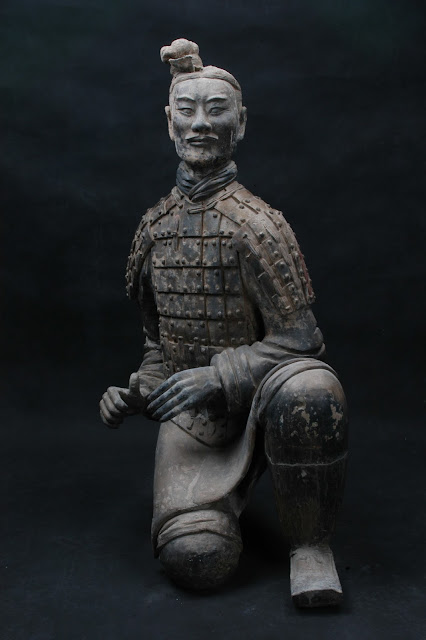 As I made my way through the first galleries of Age of Empires, I felt contrarian sentiments akin to those expressed by the Devil in Rudyard Kipling's ironical reworking of the Bible, The Conundrum of the Workshops. At key moments, the Devil emerges to whisper a subversive refrain:

Kneeling Archer's individuality is so marked that he appears almost human. But is a terracotta funerary figure, never intended to be seen, really a work of art?

Certainly the ushabti and offering bearers placed in ancient Egyptian tombs pose the same dilemma. And some of these are among the most life-affirming works of art from antiquity. Yet, this guardsman of Emperor Qin Shi Huang testifies only to the emperor's fear of assassination and yearning for eternal life. Kneeling Archer is a soldier of the Kingdom of the Dead .

Further on in Age of Empires are art works bursting with life, vitality and joy. Such sentiments are too strong to be reserved for a despot's exclusive welfare. These works also testify to the lasting influence of cultural achievement over the short-term effects of militarism.

The Qin Dynasty (221-206 B.C.) wielded impressive martial force which enabled it to conquer much of China. But it was an short-lived triumph. Within four years of Qin Shi Huang's burial, the Qin hegemony collapsed. The more humanistic Han Dynasty then began its four centuries of power, rivaling the influence of its contemporary in the West, the Roman Empire.

The Han Dynasty art in Age of Empires includes vibrant dancers and musicians that are studies of poetry in motion. Never mind that they are statues. The movement and the music are there before us in the Met's gallery. 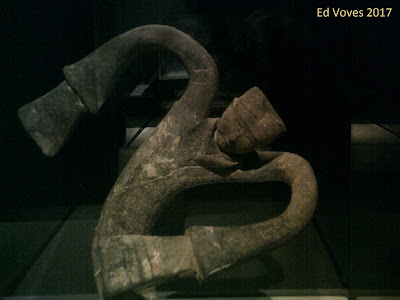 These earthenware figures are examples of mingqi, or spirit goods. Like the terracotta soldiers of Qin Shi Huang, they were destined for an emperor's tomb to provide eternal delight. Now, exhumed from the burial chamber, they perform for us. Two thousand years have not stilled their vitality.

The entombment of statues of warriors and dancers - rather than actual people - represented a major advance in humanity. Earlier eras of Chinese history had witnessed human sacrifice on a large scale so that retainers and slaves could be sent to serve a deceased monarch or nobleman in the afterlife.

Mingqi could be individually sculpted as the Kneeling Archer was or cast from a mold like the Han dancer. There were also bronze figures, humans and animals like the mighty horse and its diminutive groom who introduce this review. This pair was excavated in 1990 from a grave dating to the Eastern Han period, which lasted from 26 to 220 A.D. 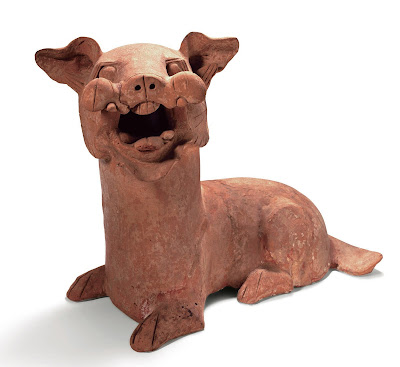 The expressive features of mingqi  animals and the incredible diversity of species found in the Han tombs are wondrous to behold. The artists who created these amazing animals depicting them according to established conventions while imparting a degree of individuality to each of the animals. 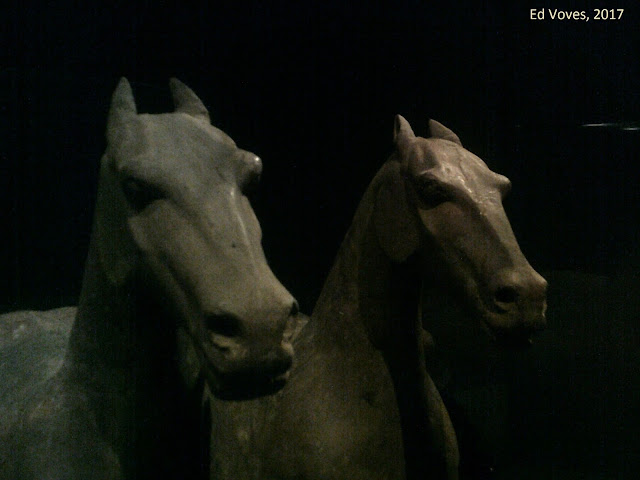 The strength and nobility of these two horses, which come from the Museum of the Yangling Mausoleum, are especially striking. Here in central China, the capable Han ruler, Emperor Jing (188-141 BC), built a tomb with an earthenware army rivaling that of Qin Shi Huang's array in numbers though not size. Most of the figures are one-third in scale to those of the First Emperor's.

In striking contrast to the vitality of these mingqi animals is the inert Burial Ensemble of Dou Wan. 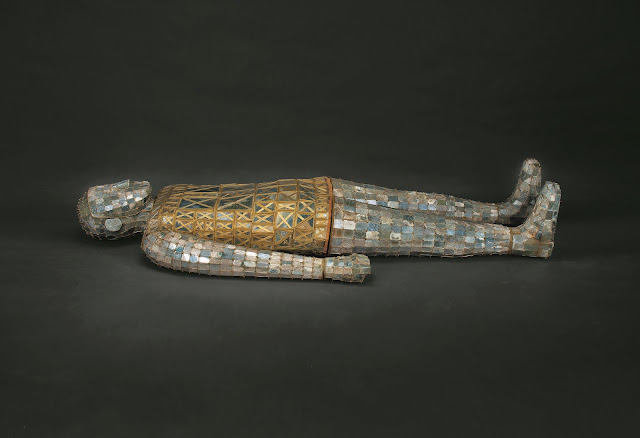 Lady Dou Wan was married to the son of Emperor Jing, Prince Liu Sheng, who died in 113 BC. Both husband and wife were clad in elaborate suits made of over 2,000 jade plaques, stitched together with gold wire. The sacred jade plaques were believed to prevent the decomposition of the body of the deceased, thus causing the release of malignant spirits.

The Burial Ensemble of Dou Wan failed to preserve her body. Nothing but crumbled bones were found inside the glistening jade plaques, when the tomb was discovered in 1968. 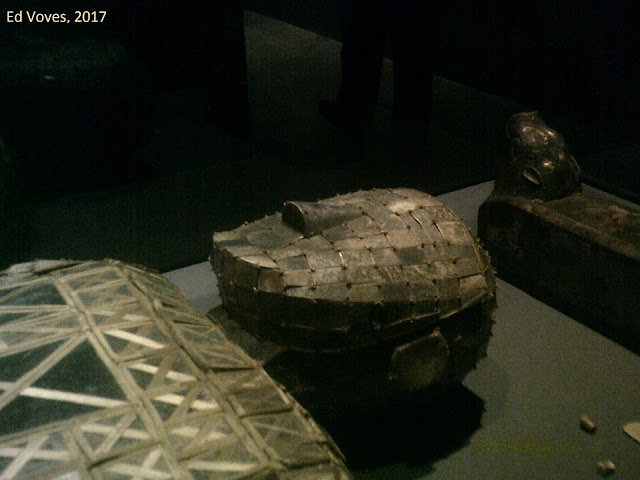 Looking down on the mask of Lady Dou Wan is a sobering experience. However magnificent in outward appearance, the jade and gold costume is positively lifeless when compared to the mingqi dancer discussed earlier. It is the Chinese equivalent of the famous verse from the New Testament (Matthew 23:27) warning of "whited sepulchres, which indeed appear beautiful outward, but are within full of dead men's bones, and of all uncleanness."

The Han Empire should not be judged too harshly, as a beneficial interplay of Confucianism, Taoism and Buddhism took place during its rule. Chinese people today rightly regard the Han dynasty as one of the golden eras of their country. Yet, as with the "grave goods" in Egyptian tombs, these jade burial suits were a status item available to an elite few. Grave robbers targeted these jade "ensembles" burning them to retrieve the melted gold wire. 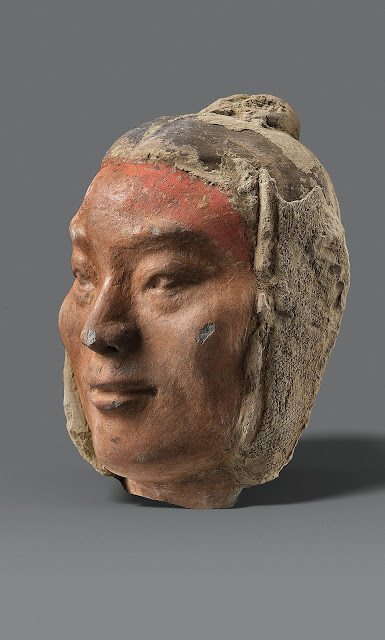 Very few jade burial ensembles survived the the fall of the Han dynasty in 220. Despite relatively benign government, the usual combination of corruption and greed combined to undermine the Han rulers. A peasant uprising called the Revolt of the Yellow Turbans, eventually crushed in 205 A.D., precipitated the slide of the Han Dynasty into oblivion. This rebellion no doubt caused a great deal of grave robbing and destruction of jade burial attire like that of Lady Dou Wan which survived.

The ancient Chinese governments, including the Han Dynasty, all stressed political centralization. Given China's vast size, there was no other recourse. But it is worth noting that most of the cultural vitality of China, so brilliantly displayed in Age of Empires, came from the provinces and outlying frontiers. The elaborate Imperial courts and impressive cities of Han China drew upon the strength and diversity of those outside the privileged center.

The cultural debt of rulers to the ruled is made very clear by one of the most striking art works on display in the Met's exhibit. This is the Cowry Container with Bull and Rider which comes from the Yunan Province in southwestern China, dating some time between 206 B.C.–A.D. 9. 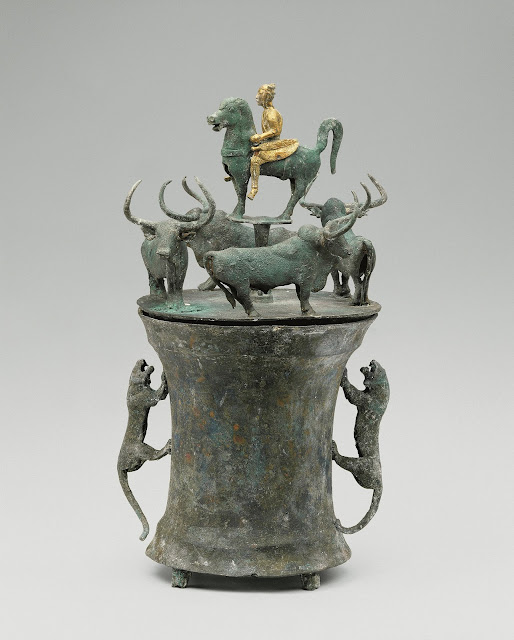 Cowry shells, imported from the Indian Ocean region, were used as China's first currency by earlier, pre-Han dynasties. This bronze container was made by the Dian people in the remote southwestern region bordering on today's Myanmar. The Dian still used cowries as a form of exchange during the Han era, even though bronze coins were in circulation elsewhere. Such backwardness earned the Dian the reputation of “southwestern barbarians” in the official court publication, Records of the Grand Historian.

The dynamism of this remarkable work of art tells a very different story. The superbly sculpted figures of the long-horned cattle, gilded herdsman and stalking tigers make this one of the most striking works on view in Age of Empires. Far from being "barbarians," the Dian artisans who made this wonderful piece were working in a timeless and universal tradition that stretches from the caves of Lascaux to Picasso - and beyond.

The tradition of mingqi "spirit goods" survived the fall of the Han and was given new shape and new life by the vigorous Tang Dynasty (A.D. 618-907) that eventually emerged from the chaos of the Han's eclipse. In this way, the "Art of Empires" outlived the heedless despots who buried it to insure their own immortality, forgetting that only art lives forever.