The Prints of Francisco Goya at the Philadelphia Museum of Art 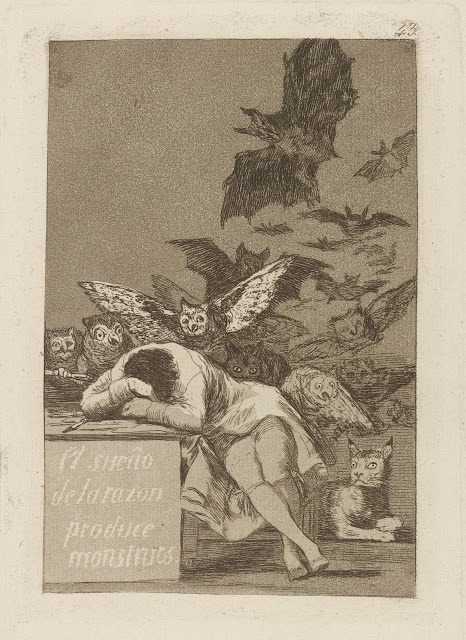 Witness: Reality and Imagination in the Prints of Francisco Goya


The Philadelphia Museum of Art

On the timeline of art history, Surrealism is usually placed between the end of the Dada movement around 1922 and Picasso's Guernica in 1937. This certainly was the heyday of Surrealism, when René Magritte, Max Ernst and André Masson probed the realm of the unconscious and the irrational with some of the greatest Surrealist works.

The problem with dating Surrealism to the 1920's and 30's is that Francisco José de Goya y Luciente (1746-1828) had created incomparable works of art over a century before that fully qualify as examples of Surrealism. If J.M.W.Turner can be lauded as a pioneer of Abstract art, Goya is certainly worthy of the title of the First Surrealist.

The Philadelphia Museum of Art is currently mounting a major exhibition of selections from  Goya's prints. The Philadelphia Museum is able to draw upon complete first edition prints from all four series of Goya's etchings: Los Caprichos, Los Desastres de la Guerra (The Disasters of War), La Tauromaquia and Los Disparates. Goya's bullfighting lithographs, created while he lived in exile in Bordeaux, France, during his last years, are also on view.

Goya's prints strike directly and deeply into the troubled soul of humanity. This is quite evident from the Philadelphia Museum exhibition. These are still-shocking works of art, two hundred years after their creation.

When you look at The Disasters of War, Plate 15, And There Is No Remedy (Y No Hai Remedio), the execution of this prisoner could have occurred during any war or revolution from the 1600's to the contemporary world. The blunt, deadly rifle barrels, the last, terrifying moments of a blind-folded captive roped to a wooden stake are the only subjects here. Political ideology, military necessity, flags, bugles, etc. are all banished from the picture plane. A human being is going to die ... and There Is No Remedy. 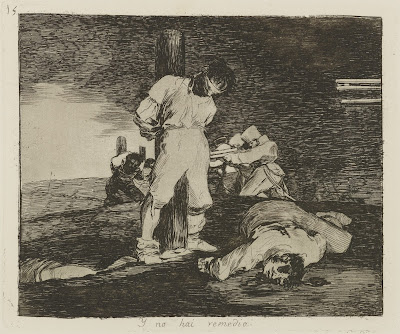 Goya's Disasters of War might be disqualified from being Surrealist works of art, given that such scenes of carnage were a daily reality during Spain's war against the French army of Napoleon, 1808 to 1814. In the background of And There Is No Remedy, a second firing squad is at work, reprieving the pose and uniforms of the Napoleonic executioners in Goya's The Third of May.

Yet, what appears to be ultra-realism in both etching and oil painting is, in fact, entirely imaginative. Goya was in Spain during these terrible years. Based in Madrid, he was removed from the actual fighting which was largely conducted with "hit-and-run" tactics soon to be  called "little war" or "guerrilla" warfare. These Disasters of War were events Goya "witnessed" through his mind's eye.

Goya's first series of etchings, Los Caprichos, are chiefly imaginative too. Goya maintained that these works were commentaries on the superstition and venality of Spanish society, especially of the Catholic Church which he detested. If so, few of the etchings were accurate depictions of scenes Goya actually witnessed.

The very title of the series, the Spanish translation of "caprice," can be taken to be mean "whim."  This in turn can be interpreted as Goya's whim to render "the innumerable foibles and follies to be found in any civilized society" as he saw them, rather than as they happened. 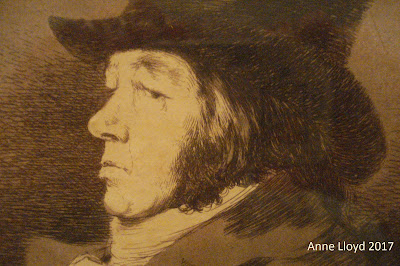 Goya's early work as a portrait, religious and genre painter gave little indication of this capricious or "dark" side of his artistic vision.  In 1792, he fell seriously ill from what researches believe was a rare autoimmune condition called Susac’s syndrome. Beginning with severe headaches and buzzing in his ears, Goya then experienced hallucinations, paralysis and hearing loss. He went completely deaf, though he eventually recovered physical stamina sufficient to begin painting  – and etching.

Goya's mastery of etching is astonishing. His handling of the tonal qualities of gray and black equaled Rembrandt's. Goya's use of blank space, as can be seen in Plate 6, Nobody Knows Himself, is in a class by itself. The patch of light on the temple and cheek of the woman on the left and over the breast of the younger woman on the right open passage ways straight to the human mind and heart and soul. 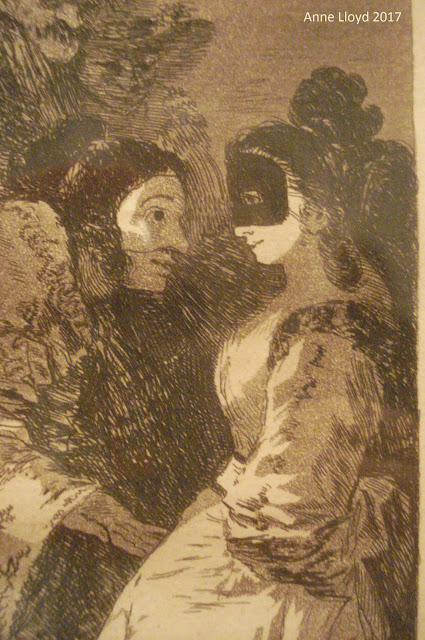 That is what the experience of going deaf did to Goya. He seems to have developed a heightened degree of vision, cutting through all the pretense and posturing of society. As if in compensation for his loss of hearing, Goya was able to see more clearly, deep into the human spirit. No one could hide from him - including himself.

Plate 5 of Los Caprichos is a fitting example of Goya's penetrating vision. The scene is one that could be seen on most plazas of Spanish towns or cities in the late 1700's. A young, stylish gentleman is ogling a voluptuous woman in a revealing "maja" dress. Yet, this image has much more to reveal. 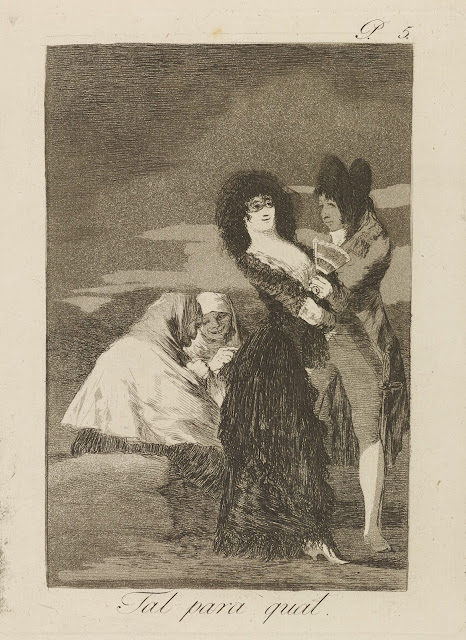 The facial features of the woman in Plate 5 resembles those of the Duchess of Alba (1762-1802). The wealthiest and most notorious woman in Spain,the Duchess had looks to match. "Every hair on her head elicits desire," an admiring Frenchman declared. 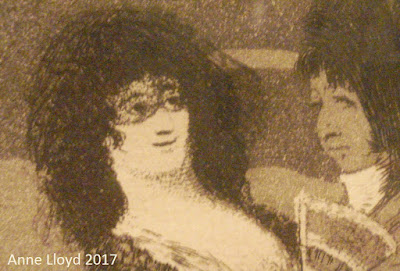 In 1796, the now-deaf Goya went to the country estate of the Duchess for a lengthy visit in order to paint portraits of her. The most famous of these, in the collection of the Hispanic Society in New York, shows her dressed in mourning for the recently deceased Duke of Alba. The Duchess was also shown wearing a ring inscribed "Goya."

Yet, if Goya had an illicit affair with the Duchess, it cannot have been a happy one.  The eighty prints of Los Caprichos, created in aquatint and etching, were published in an album in 1799. Quite a number of the prints show women with the features of the Duchess and not to her advantage - courtesans, women "on the make," shrews. One of the prints shows a group of  "two-faced" women, both faces looking like the Duchess of Alba.

In taking aim at Spanish society with Los Caprichos, was Goya also holding himself and the Duchess of Alba up to censure? It had to be a conscious decision to depict the Duchess of Alba in such fashion. But the motivation for this could only have come from powerful emotional factors, deep within himself, such as an admission of personal guilt.

The other prints of Goya's Los Caprichos made good his promise to depict humanity's "innumerable foibles and follies." This he did, skewering Spanish society like a bullfighting picador with his lance.

Goya reserved special ridicule for the Spanish nobility, not just the Duchess of Alba. One of my favorite prints from this series shows an aristocratic mule studying his pedigree - a long line of mules.

Another print, entitled Chinchillas, derived from a famous eighteenth century comedy. Goya's Spanish noblemen, with their padlocked brains, may have inspired  the features of one of Hollywood's most dreaded monsters. There has been some speculation that the Universal Studio makeup man, Jack Pierce, based the features of Boris Karloff in the 1931 film, Frankenstein, on Goya's Chinchillas. 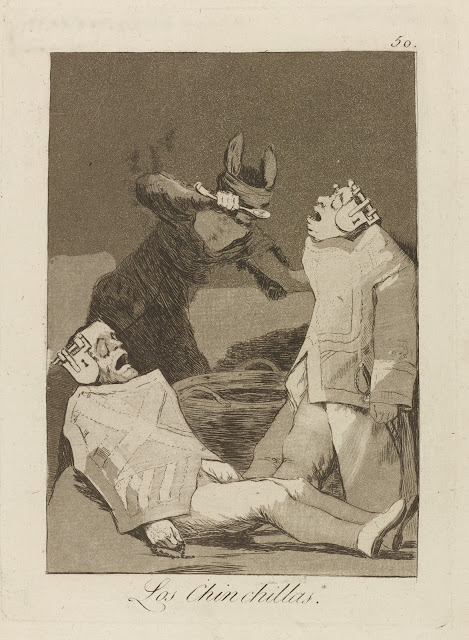 If the look of the Monster (Karloff) in Frankenstein did derive from Los Caprichos then the caption of the most famous print from the series takes on added significance.

Plate 43 of Los Caprichos, The Sleep of Reason Produces Monsters, is the introductory image of this review. It is one of Goya's most familiar and most studied images. The common interpretation of this print has Goya, the Man of the Enlightenment, warning of the gathering irrational forces threatening the Age of Reason.

A very different appraisal appears in the essay, "Tensions of the Enlightenment", which can be read in Nineteenth Century Art; a Critical History, edited by Stephen Eisenman. In this a challenging interpretation, Thomas Crow writes:

Yet it is by no means clear that the cloud of monsters that darkens Goya's self-portrait is that of popular ignorance, soon to be dispersed by the artist's satiric pen and sunlit powers of reason. Just as likely is it that Goya is reflecting upon the distressing antipodes of his own mind and upon the Janus-face of Enlightenment itself. For in fact, the very creation of art in an age of Reason entailed a dangerous flirtation with madness. 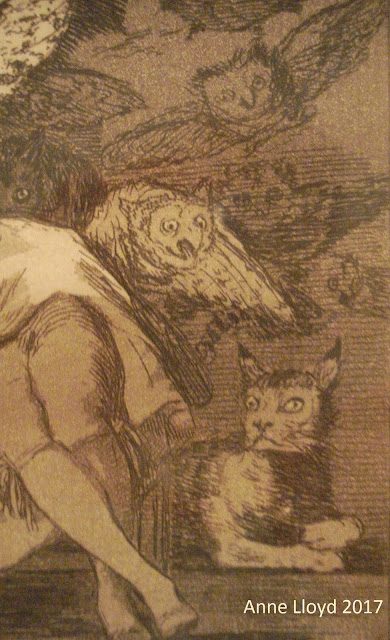 In this view, the Age of Reason was the victim of its own ideology. Well-meaning Enlightenment philosophers like Voltaire, Rousseau  and Thomas Paine had prepared the way for the Terror of 1792-94 and for the rise of ruthless, opportunistic tyrants like Napoleon, whose his first military conquests occurred just as Goya prepared Los Caprichos for print.

The Enlightenment had, unwittingly, unleashed the inner demons of humanity, symbolized by the bats, owls and cats surrounding the beleaguered man - Goya, himself - in The Sleep of Reason.

Whatever interpretation one gives to this famous image, its nightmare imagery was amply confirmed by the horrific events of the Spanish revolt against Napoleon, lasting from 1808 to 1814.

Many of the prints in The Disasters of War are so graphic, so revoltingly accurate in their depiction of the atrocities committed by both sides that the series was not published until 1863. Yet, even though he did not personally witness the savage conflict in person, Goya did not exaggerate the unspeakable cruelty. This astonishing realism is indeed surreal because even these horrifying images do not convey the full magnitude of the suffering. 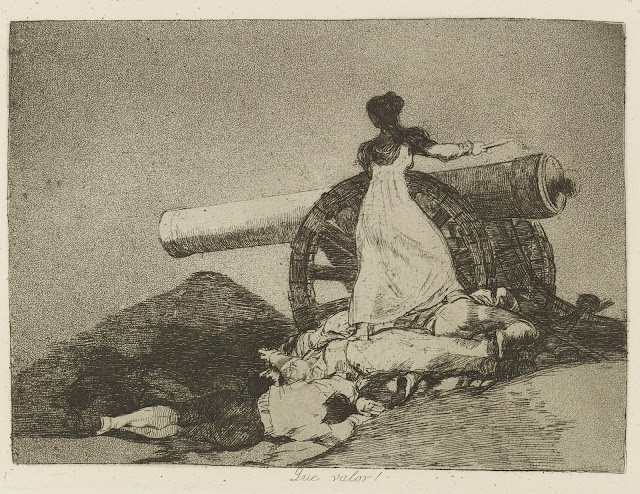 Consider the print What Valor! It records an actual incident, when a young woman, Agustina Domènech, rallied Spanish troops during the siege of Zaragoza by firing a cannon at the advancing French. Goya, who was born in the nearby town of Fuendetodos, was obviously proud of this heroic event. But he was well aware of the staggering death toll of 54,000 Spanish, soldiers and civilians, who died during the long siege of 1808-09.

The pile of corpses that Agustina of Zaragoza stands upon to fire the cannon may be viewed as symbolic of the reality the Spanish War - and of the best and worst that human beings are capable of.

It would be some consolation to think that the loss of so many lives during the war against Napoleon resulted in freedom, justice and prosperity for Spain once the invader was expelled. But with the return of the Spanish monarchy in 1814, the constitution which the freedom fighters had created was suppressed and a reign of tyranny instituted, crushing the very patriots who struggled so courageously to free Spain from Napoleon's legions.

This is political "surrealism" at its absolute worst. Thomas Crow writes perceptively of Goya:

Goya, following the war with Napoleon, lived in a state of emotional collapse. He produced bullfighting etchings and lithographs, brilliantly executed but essentially popular escapism. 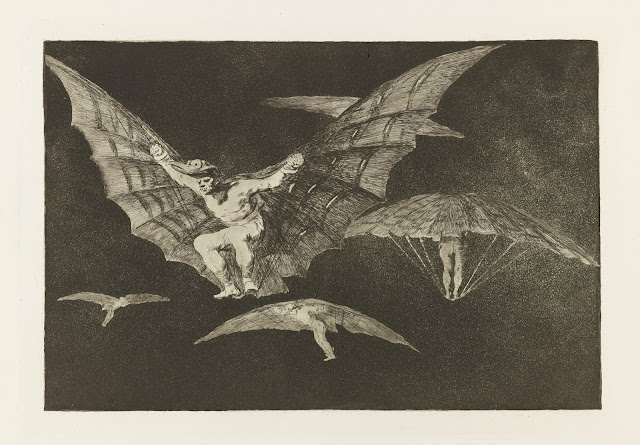 Goya also created a new series of fantasy works, Los Disparates (The Follies), that hint at the depths of his despair. This was to surface in his final "black paintings" created between 1819 to 1823, notably the chilling Saturn Devouring His Son.

What are we to make of these astonishing prints by Goya? I first saw The Disasters of War in a long-ago pilgrimage to the Prado in the late 1970's. The shock never wore-off. I have made two trips so far to the current exhibit at the Philadelphia Museum of Art and plan further visits. The wonder, the horror, the enigma of Goya's prints just keeps growing, an obsession that is linked, beyond doubt, to the mystery of life.

Posted by Art Eyewitness at 7:41 PM