Noah's Beasts: Sculpted Animals from Ancient Mesopotamia at the Morgan Library and Museum 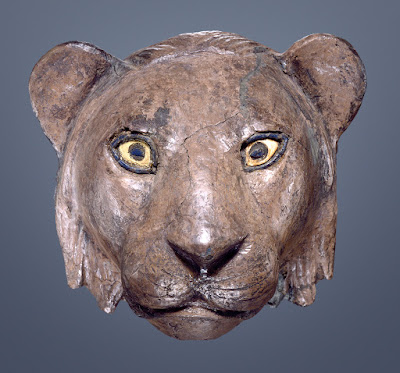 Noah's Beasts, the wonderful exhibit currently at the Morgan Library and Museum, recalls the lyrics sung by "General" Tom Thumb in the musical Barnum:

Noah's Beasts: Sculpted Animals from Ancient Mesopotamia is very small exhibit. The are only sixteen objects on view. However, this select number includes some of the oldest and most striking works of art in existence - anywhere. This is a "focused" exhibit, but one which is remarkable for its thematic scope, brilliant curatorial design and the insight it provides on issues ancient and modern.

Several of the works of art appearing in Noah's Beasts were displayed in Art of the First Cities. Their impact was somewhat reduced by the sheer magnitude of the exhibit. But there is no chance that these stunning depictions of animals from antiquity will be overlooked at the Morgan. 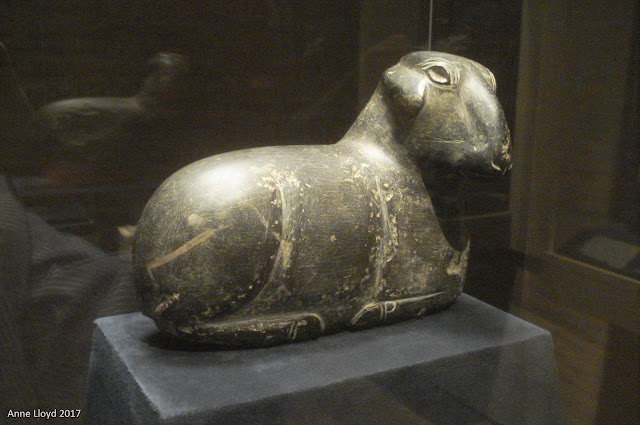 Even in Noah's Beasts, however, there is a chance that the smaller pieces on display might get "lost in the shuffle." Some of the cylinder seals and a fragment of a baked clay tablet inscribed with the Akkadian cuneiform script (a distant ancestor of Hebrew) are easy to pass by. This would be a big mistake and Sidney Babcock, the Morgan's Curator Ancient Near Eastern Seals and Tablets, wasn't about to let that error be made at the press preview for Noah's Beasts.

"I want you to look at this," Babcock said, with quiet, if unrestrained enthusiasm. "Please take a look at this."

Babcock pointed out the details of modern impressions made in wax from the ancient cylinder seals. Invented in Mesopotamia, cylinder seals played a major role in the development of writing and visual art.

These small cylinders were made from hard minerals like serpentine or marble and carved with images and letters. The cylinders were then rolled on to clay, producing seals for official documents. Over and over again, the images are of "priest-kings" or warriors dealing with animals - offering them in sacrifice to the gods, fighting predators in deadly combat, herding cattle and sheep in from the fields.

Few people in the Sumerian city-states would ever have seen incredible works of art like the silver head of a lion from the fabled tomb of Queen Puabi. The images produced from cylinder seals were another matter. The same is true of a battered clay tablet from the Morgan's collection. This rather mundane object is key to the entire Noah's Beasts exhibition. What appears on the tablet is an early version of the biblical story of Noah's Ark. Entitled The Epic of Atrahasis, the parallels with Noah's ordeal in this "epic" are not coincidental. In the quote below, we read how the Sumerian god Enki warns Atrahasis, sleeping in his reed hut, to prepare for the worst in flood-prone Mesopotamia.

(The god) Enki made his voice heard . . . “Wall, wall! Reed wall, reed wall! Atrahasis, pay heed to my advice, That you may live forever! Dismantle the house, build a boat, Reject possessions, and save living things. The boat that you build . . . Make upper and lower decks. The tackle must be very strong, The bitumen strong, to give it strength. . . .

And then, roaring "like a bull ... like a wild ass screaming" the flood raged across the land.

The Epic of Atrahasis dates to ca. 1646–1626 BC, about one-thousand years before the Book of Genesis is believed to have been written. This hugely influential act is dated to the reign of the reforming king of Judah, Josiah, during the late seventh century BC.

Interestingly, the Morgan's fragment of The Epic of Atrahasis can be dated to the reign of Ammi-saduqa, king of Babylon. His father had been Hammurabi, author of the first written law code in history.

The Morgan's exhibit can thus be seen as illustrating humanity's attempt to implement legal structures for society, following in the wake of divine punishment of mankind's misdeeds. Noah's story, and that of Atrahasis, narrates nothing less than a new beginning for the human race.

It must be admitted, however, that what really interests us about Noah and Atrahasis is the animals in their lives  - and in the hulls of their flood-tossed ships.

Many of the animal sculptures on view at the Morgan come from the rich collection of the University of Pennsylvania Museum of Archaeology and Anthropology.

The silver lion head, whose image introduces this review, the extraordinary Rearing Goat with a Flowering Plant, the Head of a Markhor Goat with his corkscrew horns were discovered by Sir Leonard Woolley during his expeditions in the 1920's and 1930's. Often found in pairs, (one would go to British Museum, the other to the University of Pennsylvania) Woolley's treasures created a sensation during the inter-war years.The passage of time has not dulled their brilliance.

These sculpted animals are nothing short of incredible. Created five millennia ago, they impress both by their astonishing naturalism and also for their symbolical impact. 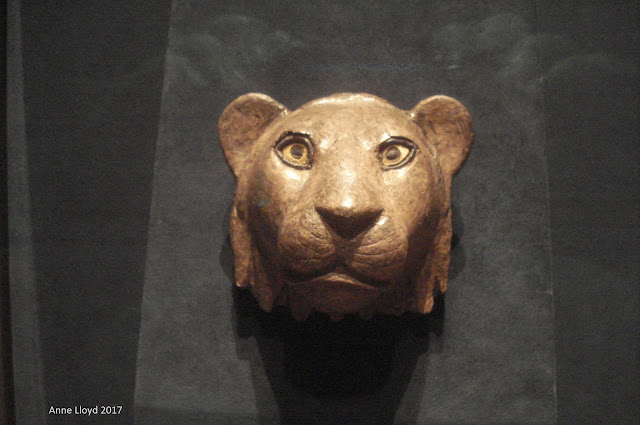 The silver lion's eyes, for instance have inscribed slits, creating a remarkable sense of predatory realism. The lion head (and its partner at the British Museum) may have graced the arm rests of a throne. If so, the hint of a snarl created by the incised markings above the upper lip of the lion would have given anyone approaching the throne cause to tremble. 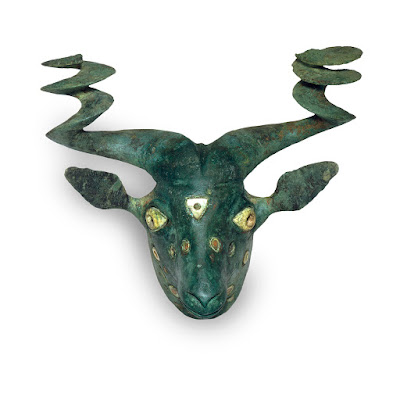 The Head of a Markhor Goat, its copper alloy green with age, was created by the lost wax casting process, certainly one of the earliest examples we have. There is debate among scholars about the gleaming triangular piece of shell inserted into the animal's forehead. Most likely it represents, a fringe of hair. But might it also represent a "third eye" or some other acknowledgement of the animal's spiritual nature. Scholars have commented on the "numinous" quality of this animal, so the latter interpretation is certainly worthy of consideration.

It is important to keep in mind that these wondrous animals represent creatures that both Noah and Atrahasis loaded on board their ships. These were the animals. wild and domesticated, with both heroes were familiar. Later depictions like the charming scene painted 1846 by the American Quaker artist, Edward Hicks, showed two of each species trooping on board. Giraffes, zebras, an entire zoo marched up the gangplank. 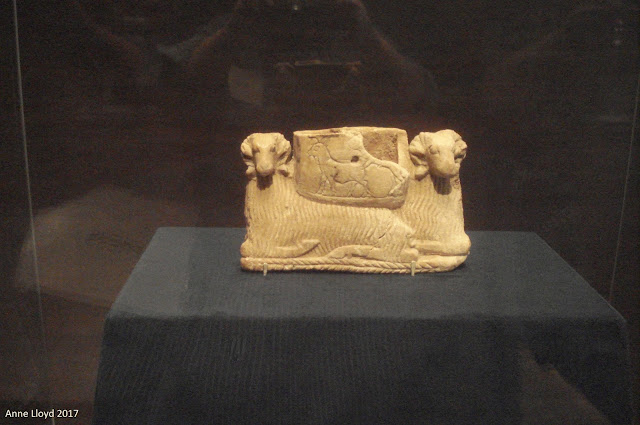 The citizens of Ur, Nippur and other city states of Mesopotamia were not likely to have seen any giraffes in the flood-menaced plain between the Tigris and Euphrates. These founders of Civilization - as we know the term - were a bit more pragmatic to have spent much time saving exotic animals when their own herds of cattle, sheep and goats were at risk.

A "great" flood may have occurred- and there are many hypothetical dates and explanations.  But the Sumerians were exposed to constant danger from sudden, killer floods. Most, like Atrahasis, lived in reed huts that could be readily rebuilt, Their domestic animals bunked with them in the same structures. So, great flood or small, it would not have been a stretch for Noah and Atrahasis to share cabin space on a hastily-built "ark" with animals from field and farm.

it also needs to be emphasized that Noah and Atrahasis saved their lives and those of their "beasts" so that all could serve the gods.

In his remarks at the press preview, Sidney Babcock paid special attention to an exquisite figure of a cow kneeling in supplication to the gods. This amazing figure,dating to around 3000 BC, needs to be viewed from a special angle to be properly understood. As they say in real estate, location is everything.

The tendency of museum visitors to seek the best view of a museum object, either profile or three-quarters, requires a bit of restraint in the case of this kneeling cow. 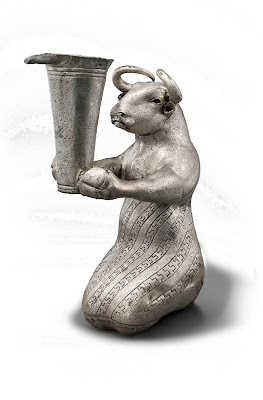 Babcock perceptively noted that this silver statue would have been positioned so that the vessel that cow is holding would be the most prominent feature. What the god saw was what mattered and what mattered was the gift-offering or act of devotion. 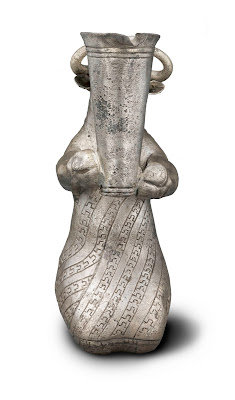 The Kneeling Cow Holding a Vessel  is thought to come from southern Mesopotamia, not far from Ur. This was the city where Queen Puabi's tomb was found and more, importantly, the home town of Abraham, the first leader of the Chosen People. There is a temptation to view splendid objects like this in terms of the Holy Bible. Sir Leonard Woolley, himself, was unable to resist.

In the late 1920's, Woolley excavated the "Great Death Pit" where Puabi's tomb and many other royal burials were uncovered. There he discovered an extraordinary, multi-piece sculpture of a what he called “ram caught in a thicket." This was a direct reference to the story in Genesis 22:13 when Abraham, about to sacrifice his only son, Isaac, saw such an animal, its horns tangled in vines. The ram, not Isaac, was sacrificed sealing God's covenant with Abraham. 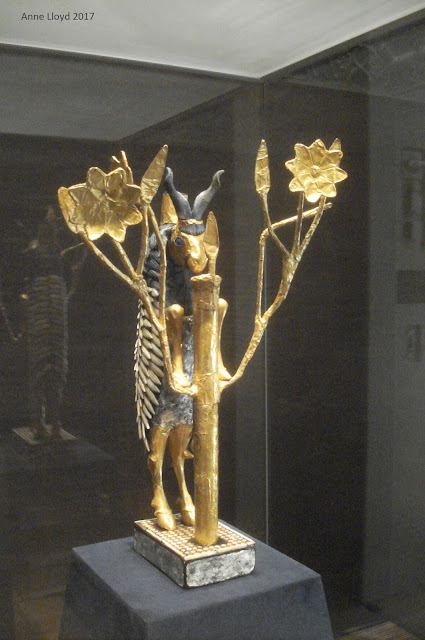 Woolley, despite being one of the greatest archaeologists of all time, incorrectly reassembled this extraordinary sculpture. According to the fascinating account in the University of Pennsylvania Museum website, Woolley pressed the trunk of the "thicket" too deeply into the base. The ram's hooves dangled above the surface of the ground, as if caught in the bush. When the piece was closely examined in the 1990's, conservators realized the mistake.

The "ram" is actually a Markhor Goat, preparing to "mount" the flowering plant. The goat represents male sexual potency, the plant female fertility. This is not exactly the "missionary position" nor is it as inspiring as the Bible story of Abraham. But the earthy, agrarian people of Ur of the Chaldees would have understood.

The Garden of Eden was once thought to have been situated in the "land between the rivers." Looking at these "beasts," these animal companions of Noah, it's easy to understand why.

***
Text: Copyright of Ed Voves, all rights reserved. Images courtesy of the Morgan Library and Museum and by Anne Lloyd.

Anne Lloyd, Photo (2017), Head of a Lion, Mesopotamia, Sumerian, Ur, PG 800, Dromos of Queen Puabi’s Tomb, University of Pennsylvania Museum of Archaeology and Anthropology, Philadelphia B17064.

Posted by Art Eyewitness at 3:43 PM