The Berlin Painter and His World: Athenian Vase-Painting in the Early Fifth Century B.C. 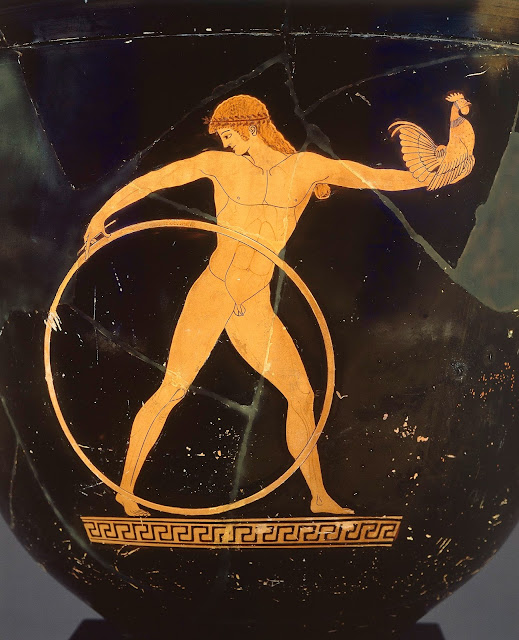 The Berlin Painter and His World:

We know the names of many great sculptors and painters from Ancient Greece but precious few of their works of art have survived.

By contrast, an amazing number of terracotta vases, pots and other vessels that were decorated with scenes from mythology and daily life have been preserved. Yet, the names of many of these vase painters have been lost to history.

An impressive - and important - exhibition is currently highlighting the work of one of these anonymous vase painters from Athens. The Berlin Painter and His World: Athenian Vase-Painting in the Early Fifth Century B.C. was organized by the Princeton University Art Museum, where I saw it shortly before it closed on June 11. This exhibit will appear next at the Toledo Museum of Art starting July 8, 2017. 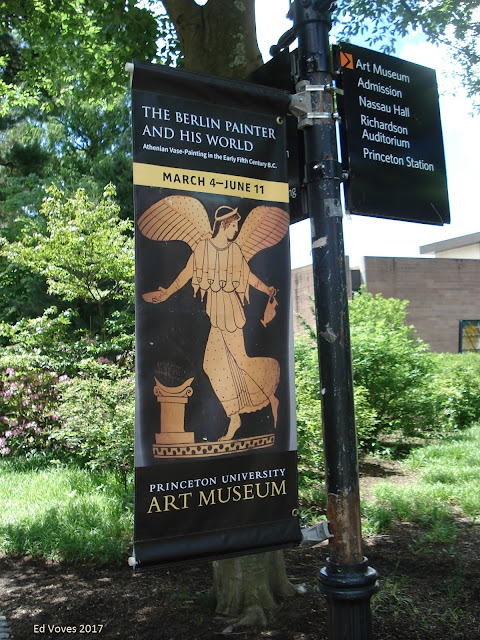 "Berlin Painter" is a distinctly odd name for a master of ancient Greek art. This great Athenian artist, who lived around the time of the Persian Wars, has been called by this title for reasons we will discuss below. Since 1911, when the existence of the Berlin Painter was first deduced, over 330 works are now attributed to him.

When I went to the Princeton University Art Museum, sixty of the Berlin Painter's oeuvre were on view, along with examples of works by fellow vase painters, chiefly from Athens. A surprising number of the treasures gleaming in the gallery display cases were discovered in Italy. The Etruscans, the dominant power in Italy before the rise of Rome, were enthusiastic consumers of Greek wine and olive oil. They were also devoted collectors of Greek art, including the paintings of the Berlin Painter on the wine jugs and oil flasks that contained these precious liquids.

Just who was the Berlin Painter?

The scholarly "Sherlock Holmes" who discovered the Berlin Painter was an Oxford don working patiently in museum galleries and storerooms across Europe. Sir John Davidson Beazley (1885-1970) was one of the world's greatest experts on Greek red-figure pottery. In this technique, a scene or individual figure was painted directly on the unglazed surface of the ceramic piece. A coat of shining black glaze was applied to the rest of the vessel. 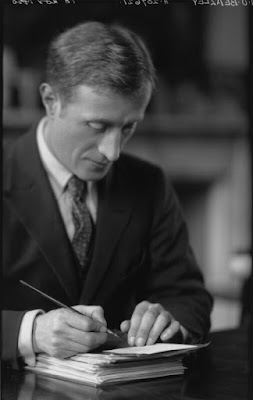 In 1911, Beazley visited the museum of ancient art in Berlin, the Antikensammlung Berlin. As he began studying the Greek red-figure vases, a large amphora or lidded jar drew his attention. Examining it closely, Beazley experienced an epiphany. 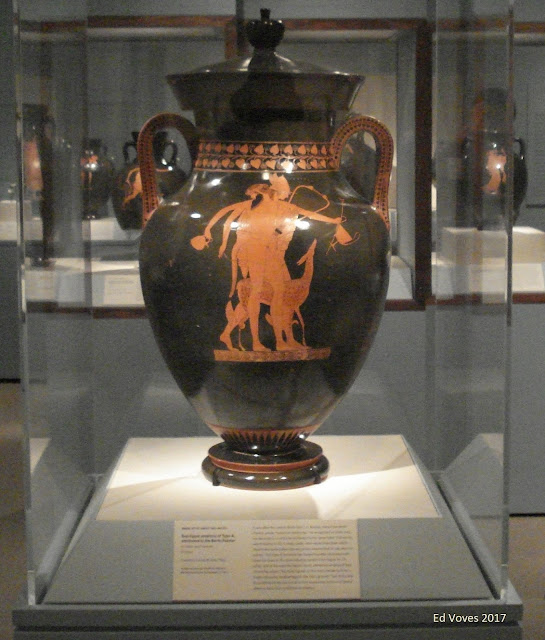 This red-figure work, painted with a depiction of a satyr and the god Mercury, is a truly distinctive piece. But what struck Beazley were its similarities in artistic style and form with other red-figure works that he had examined. Beazley concluded that this unsigned amphora had been painted by an artist whom he dubbed the  "Master of the Berlin amphora."

If this title sounds a bit like the way that medieval paintings are credited to anonymous artists - "Master of the Merode alter piece" for example - that should come as no surprise. Beazley was also an expert on Flemish art from the late Middle Ages.

The lidded amphora with a hung-over satyr, the dapper Mercury in his winged-cap and a delicate-looking fawn is considered the "name vase" of the Berlin Painter. 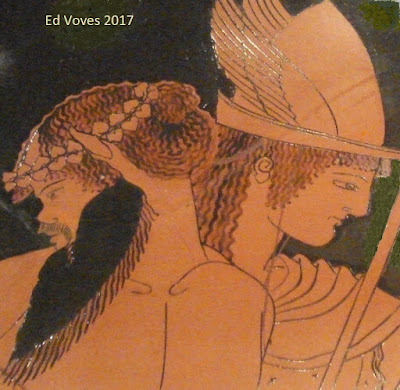 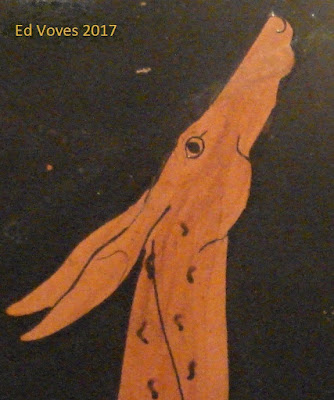 The name vase is also a mysterious piece. Its theme evokes Dionysus, the god of wine and revelry, particularly the over-size wine goblet held by Mercury. But Dionysus does not appear on the amphora. A single satyr was painted on the other side. We are still in the dark about the message which the Berlin Painter sought to convey.

After making this brilliant deduction, Beazley continued to study Greek vases, drawing analytical sketches by the hundreds. These drawings enabled him to compile a list of works created by the "Master of the Berlin amphora."

Beazley took a hiatus from his labors to serve in British naval intelligence during World War I. His brilliant powers of analysis were put to good use in Room 40, the famous center for cryptanalysis, which broke the German radio communication code.

After the war ended, Beazley returned to the red-figure hunt. In an article published in 1922, he identified one of the most beautiful Greek vases in existence as a masterpiece by the Berlin Painter. Now one of the jewels of the Metropolitan Museum's collection, this amphora, dating to 490 B.C. (the year of the Battle of Marathon) shows a young singer playing the kithara, swaying to the sound of the music. 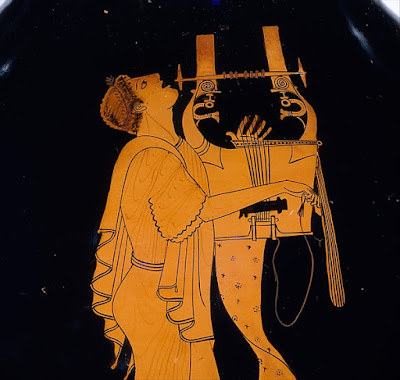 A comparison of the two artists is fascinating. Beazley contrasted the Berlin Painter and the Kleophrades Painter, respectively, as the "the painter of grace and the painter of power."

The parallel lives of the Kleophrades Painter and the Berlin Painter took place amid the profound changes and challenges in Greek life during the late sixth and the fifth centuries B.C. Their art illustrates the rise of democracy and individualism in ancient Greece around 500 B.C.  The red-figure vases of both also testify to the supreme ordeal faced by the city states of Greece when the Persian Empire launched invasions in 490 and 480 B.C.

While the Berlin Painter emphasized individuals or intimate scenes such as that depicted on his name vase, the Kleophrades Painter aimed at dramatic effect. Wrap-around scenes, both from daily life and mythological events were his specialty. The Kleophrades Painter often painted on the type of water pot known as a kalpis because this vessel gave him greater expanse on which to pose his figures. A fine example is the hunting group, depicted on the pot from the Getty Museum, on view in the exhibition.

This superb piece also shows another trademark of the Kleophrades Painter, the elaborate frames and borders for his scenes. By comparison, the Berlin Painter's elegant protagonists stand in splendid isolation, figures of warm, amber humanity set against the shimmering black glaze.

As Greece braced for the second invasion, much better prepared than the initial Persian expedition which the Athenians had decimated at the battle of Marathon, artistic taste changed. The "action painting" of the Kleophrades Painter soared in popularity. The Berlin Painter followed suit with a raging battle between Herakles and a platoon of Amazons. It is dated to this time period, as the Greeks sharpened their swords and prepared to engage the Persian hordes at Thermopylae and Salamis. 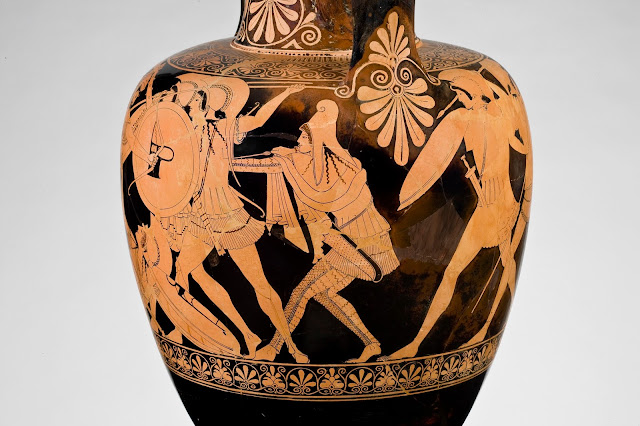 Attributed to the Berlin Painter, Amazonomachy with Herkales , Ca. 480–470 B.C.

This Amazonomachy is a brilliant piece, but one cannot escape the feeling that the Berlin Painter was just a bit out of his element with such a"CinemaScope" production. The Kleophrades Painter was a master of foreshortening, equal to the masters of the Italian renaissance. His protagonists reach out and draw us into battle scene encircling the surface of the water pot. This cannot be said of the Berlin painter.

In this combat of Herakles and the Amazons, the Berlin painter has created "spectacle" and "costume drama." His strengths as an artist have been muted in the crowded composition. In the remarkable portrait of the youthful Ganymede which introduces this review, we see a Leonardo-like command of the human form and spirit. This is all but lost in the Amazonomachy. 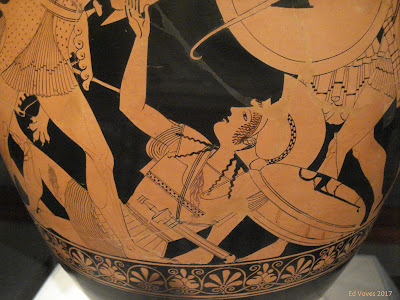 But when we focus on individual figures, the "painter of grace" makes his presence felt. In the depiction of the mortally wounded Amazon, stretching her hand heavenward in the last moment of life, we glimpse a sublime example of the Berlin Painter's art.

Both the Kleophrades Painter and the Berlin Painter created their works in what art scholars now call the "severe style." This rather odd term was formulated by German art historians beginning with Johann Winckelmann in the late 1700's. They wanted to show that a major change had taken place in Greek art, leaving the Archaic age behind.

The enigmatic "smile" of the kouros and kore statues, the stark "black-figure" format in which humans are almost always portrayed in stiff profile on vases, the overwhelming emphasis on war and violence as themes in art: such were the predominant elements of Archaic Greek art. Beginning in the last years of the sixth century, B.C., these were being replaced by the "severe" style.

A greater sense of humanity certainly began to emerge in Greek art as democracy made its presence felt. Vase painters and sculptors emphasized naturalism in the way they depicted both human beings and the gods. Why the German art writers chose to categorize this rising new spirit as "severe" escapes me. But there is no doubt that the Berlin painter was in the vanguard of one of the great "awakenings" of the human spirit. 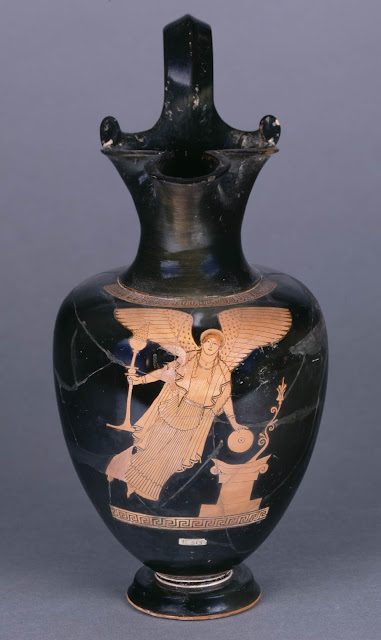 Attributed to the Berlin Painter, Nike at an Altar, early 5th century B.C.

An outstanding example of this new spirit, "severe" or sensitive, is on display in the Berlin Painter exhibit. Painted on the surface of a wine jug with a trefoil mouth is Nike, winged goddess of victory, from the British Museum collection. Nike flutters above an altar where she is about to give thanks.

There are a number of images of Nike on display in the Berlin Painter exhibit. Most are elegant, lithe spirits. The British Museum Nike is a more amply-endowed being. She holds an incense-burning thymiaterion in her right hand and a libation bowl in the left. Her pleated dress is a chiton, covered by a stole called a himation, standard garb of Greek women. Everything about this Nike is matronly, nurturing. She is more of an "earth mother" than a goddess, though a hint of the archaic "smile" hovers on her lips. 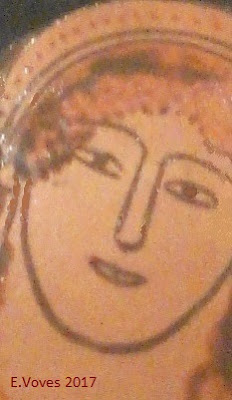 I was so struck by the everyday,down-to-earth presence of Nike that I spent some extra time and extra effort trying to get a close-up photo of her expressive face. It wasn't easy as the over-head lighting combined with the gleaming black glaze to make picture taking in the gallery a frustrating proposition. Yet, I persevered and I must say that the Berlin Painter was able to evoke the spirit of the women of ancient Greece to a remarkable degree with the British Museum Nike.

Women had a very limited roll in ancient Greek life, beyond child-bearing and house work. Taking part, if in a limited role, in religious ceremonies was the exception to the rule. This endearing work emphasizes the public place of women in society, marking an advance in human awareness as well as the arts.

With every giant step forward, there is usually a halting half-step back. The Berlin Painter exhibition concludes with several painted vases that the government of Athens commissioned as rewards for victory in athletic competitions. But the Athenian leaders evidently insisted that these be painted in the traditional black-figure style from the "good old" days. 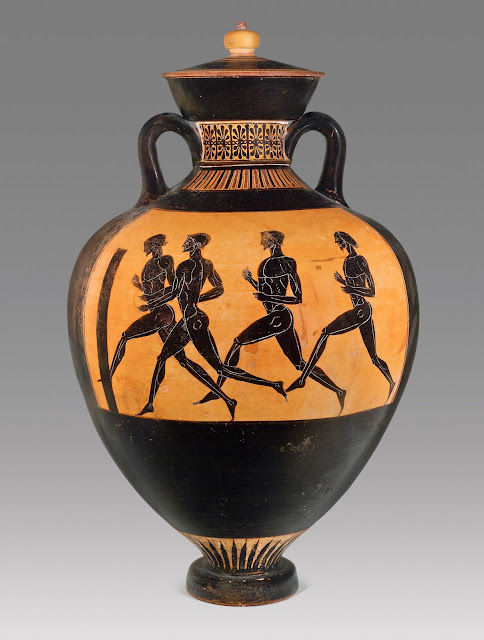 That the leaders of the world's first democracy should require its best vase painter to paint in a style that recalled the preceding age of oligarchs and tyrants is baffling in the extreme. The Berlin Painter, whoever he was, probably did not pay much heed to this inconsistency. Whatever medium is chosen - or prescribed - a great artist will find ways to create great art.

At a critical juncture in Greek history, an unknown Athenian painter of vases whom we call the Berlin Painter did exactly that.

Ed Voves (Photo 2017), View of the Princeton University Campus, showing a banner for The Berlin Painter and His World exhibit.


Ed Voves (Photo 2017), Gallery View of The Berlin Painter and His World exhibit at the Princeton University Art, showing the Berlin Painter's "Name Vase" Red-figure Amphora of Type A.

Attributed to the Berlin Painter (Greek, fl. ca. 500-ca. 460 B.C.) Black-figure Panathenic Prize Amphora; Athena between Columns Topped by Cocks, side A; Runners , side B.