Vermeer and the Masters of Genre Painting at the National Gallery, Washington D.C. 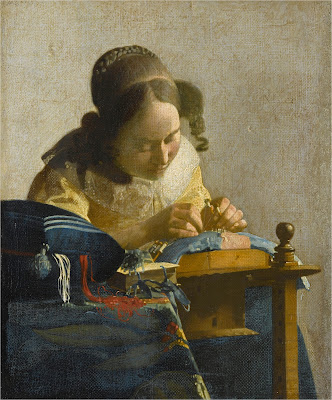 Vermeer and the Masters of Genre Painting: Inspiration and Rivalry

During the 1600's, the Dutch often compared themselves to the outnumbered Israelites battling against the Philistine hosts. After fighting for eighty years against the mighty Spanish Hapsburg empire, the United Provinces could be excused for a moment of self-congratulation in 1648. When the Treaty of Munster brought hostilities to an end that year, the Dutch had triumphed. David of the Netherlands had slain the Spanish Goliath.

The Dutch art of the Golden Age reflects that incredible victory - but in an unexpected way.

Following the Treaty of Munster, depictions of military campaigns, never a major facet in Dutch art,  fell out of favor.  The popularity of Biblical scenes, a big feature of Rembrandt's early career, likewise declined. Instead, Dutch Gouden Eeuw artists evoked quiet harmony. Peaceful, "homey" moments for people grown tired of war were the order of the day.

If Vermeer is the headline artist that is because the enigmatic painter from Delft has come to overshadow the other Dutch genre painters in this wonderful exhibit.

Some of the finest examples of Vermeer's limited oeuvre, like Louvre's The Lacemaker, are on view in this wondrous exhibition. For three months, the Gouden Eeuw will live again and every art lover who can, should journey back in time, via the National Gallery in Washington D.C., to the age of Vermeer.

The NGA exhibit, for all of its celebration of Vermeer, does us the great service of seeing him within the context of his era. 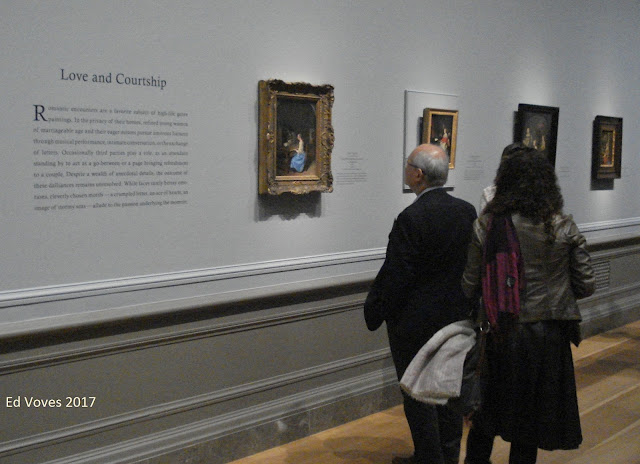 Ed Voves, Photo (2017) Gallery view of Vermeer and the Masters of Genre Painting

Vermeer actually represents the culmination of the post-Eighty Years War passion for genre painting. Throngs of people rush to see works by Vermeer but they should pay more attention to Gerhard ter Borch, Gerrit Dou, Frans van Mieris and the other Dutch genre painters. Thanks to the NGA exhibition, art lovers will be able to do exactly that.

Gerhard ter Borch (1617-1681) is the unexpected "star" of the NGA exhibit and his works impressed me greatly. I find myself in complete agreement with the curator of the exhibition, Arthur Wheelock Jr, that ter Borch "is in many ways the most intriguing painter in the exhibition and the one who had the greatest impact on his colleagues."
Wheelock further notes in the exhibition catalog:

Ter Borch mined gestures and expressions of figures to convey emotion, sometimes love or compassion, but also those fleeting moments of uncertainty that usually pass unnoticed by even the most observant friends and family. With these intimate scenes, which emphasised the inner life of his figures, ter Borch transformed the notion of "modern" in Dutch genre painting.

As well as providing new insights, Vermeer and the Masters of Genre Painting is a valedictory tribute to the great series of Dutch Golden Age exhibits that the NGA has hosted over recent years. These began with the celebrated Vermeer retrospective of 1995-1996. This incredible exhibit displayed 22 of the the 35 known works by Joannes Vermeer, including the  "Mona Lisa of the North," The Girl with the Pearl Earring.

The 1995-96 Vermeer exhibit was anything but a harmonious affair. The US Government lurched to a halt during the budget feud between Congress and the Clinton administration. Along with a huge snow storm in January 1996, the galleries of the NGA were closed for nineteen days of the Vermeer exhibit's three month schedule.

The Girl with the Pearl Earring is not making an appearance at this exhibition but a very impressive array of ten other Vermeer paintings are included. There are thirteen works by ter Borch on display, as well as superb examples of the other major Dutch genre painters,  including Gabriel Metsu, Pieter de Hooch, Caspar Netscher and Nicolaes Maes.

It is only natural that the NGA capitalizes upon Vermeer's current superstar status. And most of his works really do stand-out above the rest, though several of ter Borch's paintings more than hold their own. 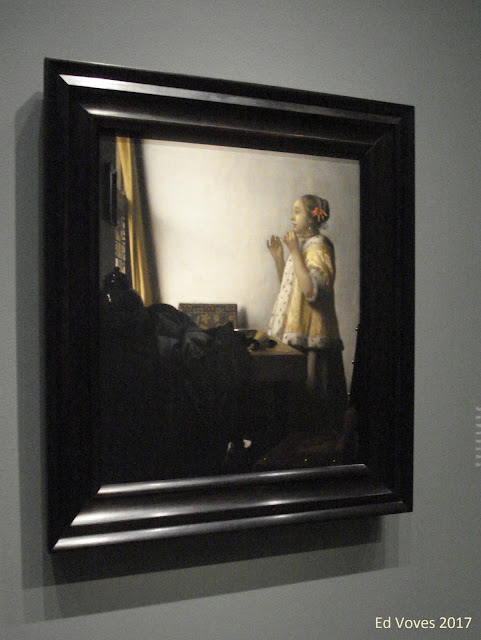 Looking down the galleries of the exhibit, I was amazed to see Vermeer's Woman with a Pearl Necklace glowing in the distance. It was, of course, a brilliant manipulation of overhead lighting to achieve such an effect. But it was the sheer brilliance of Vermeer's handling of natural light over three centuries ago that makes possible such a display of curatorial skill. 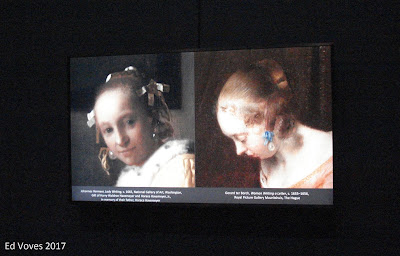 Ed Voves, Photo (2017) Video frame from Vermeer and the Masters of Genre Painting

The exhibiton presents a short video enabling a "compare-contrast" of Vermeer's paintings with those of the other genre masters. It is clear that Vermeer's Lady Writing, painted around 1665-67, was created with a deep awareness of ter Borch's Woman Writing a Letter.

Ter Borch's masterpiece dates to a decade earlier. It is a superlative work, with his sister, Gesina, posing as a model. She was a gifted painter and poet in her own right. 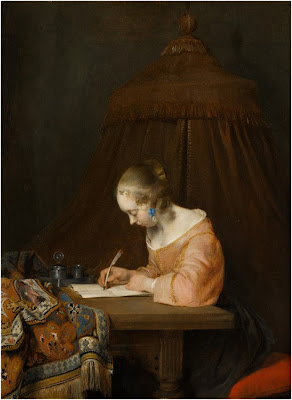 Whether Vermeer, who seldom ventured far from Delft, saw ter Borch's Woman Writing a Letter is a difficult question to answer. But as a member of the Delft-branch of the artist's association, the Guild of St. Luke, Vermeer must have been familiar with the work of ter Borch (who lived in distant Devanter), at least by reputation. 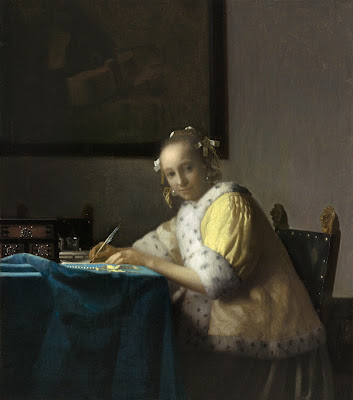 The major difference between these two paintings is the direct gaze of Vermeer's protagonist. She is regarding us, the viewers, rather than being absorbed writing a letter as Gesina ter Borch was.  However, comparison of these works by Vermeer and ter Borch gains in fascination if we include another painting by the latter artist in the discussion. 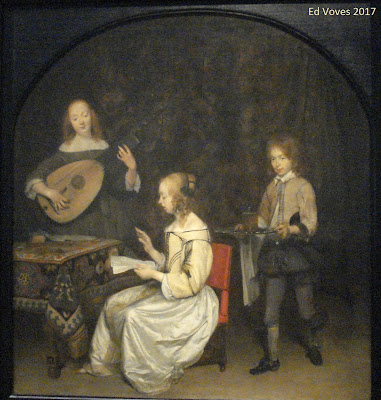 
This is ter Borch's Two Women Making Music, with a Page, painted about 1657. Gesina ter Borch apparently posed for the singer in the middle of the painting.

However, it is the page who is the figure of real interest. The adolescent page boy, gingerly bringing in a carafe of beer or cider, looks directly toward us the viewer, just as Vermeer's Lady Writing would do nearly a decade later. 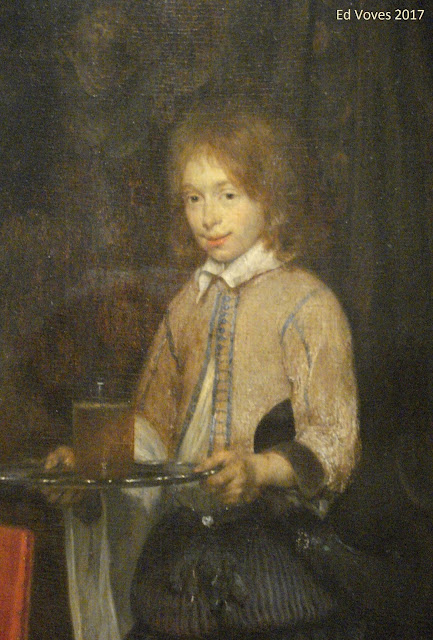 The bemused look on the page boy's face is so similar to that of Vermeer's Lady that it is almost inconceivable that Vermeer had not seen ter Borch's painting before beginning work on his.

Such is the lack of documentation about Vermeer's life that we are unlikely ever to know if he had the opportunity to travel around Holland to see the work of his contemporaries. We may think that Vermeer was influenced by ter Borch as other Dutch artists were. Yet, we don't know for certain.

We are on much firmer ground to emphasize the cultural connections of these Dutch genre masters during the years following the Treaty of Munster. To a remarkable degree, the shared aspirations and similar standards of work and play among the Dutch people created an emotional atmosphere favoring the creation of these genre paintings.

In his book, Paragons of Virtue, Wayne E. Frantis emphasized the importance of the everyday life and culture of the Dutch people during the Gouden Eeuw. Earlier scholars had been obsessed with “decoding” the symbolism and allegorical references that they saw depicted in Dutch art.

These didactic elements certainly existed, as can be seen in many of Vermeer's paintings. The painting of the Last Judgment in the background of Woman Holding a Balance, c. 1664, is a good example of this subtle moralizing. However, Dutch art from the 1650's onward was firmly grounded in the realities of contemporary Dutch society, which no longer displayed the kind of Calvinistic religious fervor that had characterized the war years. Genre paintings reflected the new intimacy and self-indulgence of Dutch society.

Frantis, one of today's leading scholars of Gouden Eeuw art, broadened the scope of his investigation beyond the visual arts. Frantis found that Dutch literature and music of the period also reflected a “realistic style” as well. Frantis quotes the preface of the Great Songbook of 1622, revealing how the practical, sensible world view of the Dutch permeated even the soaring, impassioned realm of music
.
Gerbrandt Bredero, (1585-1618) poet, playwright and song composer, wrote in the Great Songbook of 1622 (which was actually published four years after his death) that:

As for me, I have learned from one book only, the book of practice; if I have made some mistakes because of my insufficient knowledge of foreign languages, sciences, and arts, I, unscholarly layman, beg your pardon; be a little tolerant of this Dutchman… I have followed the saying common among painters: Those who come closest to real life are the best painters…

This digression to the world of music is certainly worth taking given the number of Dutch genre paintings which depict small ensembles or individual musicians or singers. 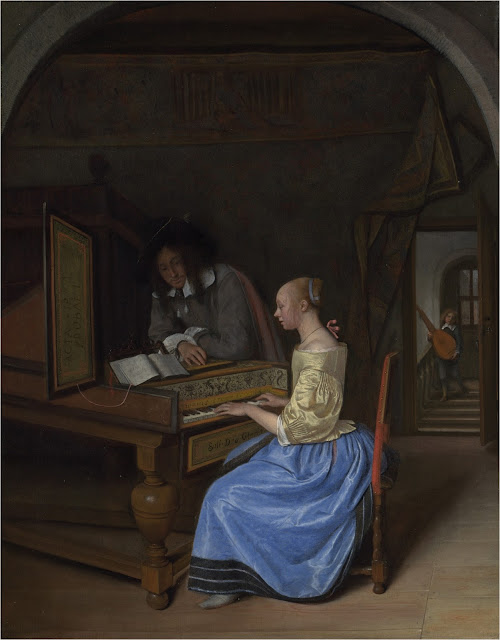 Jan Steen's beautiful Young Woman Playing a Harpsichord to a Young Man (c. 1659) is a superb example of  the intersecting creative realms of art and music. It artfully evokes differing modes of attention, the young woman's on the notes of the musical score, the young man's gaze upon her delicate fingers as they strike the keyboard.

Vermeer's Young Woman Seated at a Virginal, was painted around 1675, a decade and a half after Jan Steen's musical tableau. What is noteworthy here is the emphasis on material cultural, the conspicuous display of expensive musical instruments, sumptuous fabrics and elaborate decor. Art and human artifice, so notable in Steen's painting, have been reduced to a mere pose in Vermeer's. 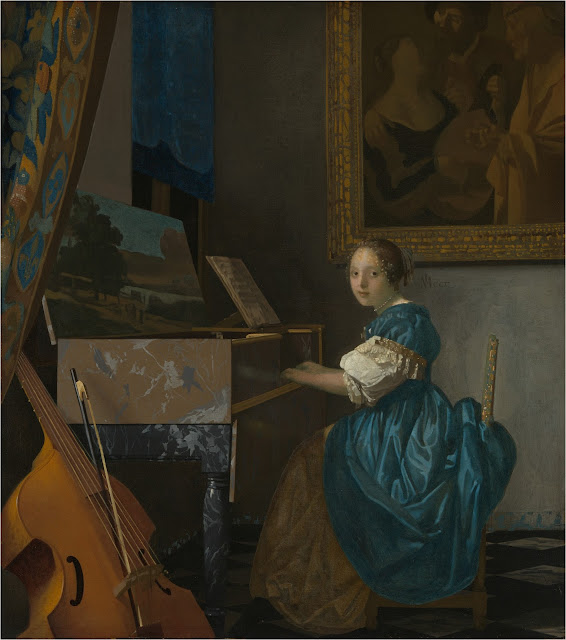 Young Woman Seated at a Virginal was one of Vermeer's last paintings. By the time, Vermeer worked on it, another change was overtaking Dutch art, as evidenced by this painting. The human-scale joys that the earlier genre works had celebrated were increasingly replaced by more attention to a celebration of "worldly goods." It was the Dutch equivalent of "keeping up with the Jones."

I found that the works of Pieter de Hooch in the exhibition confirmed Kenneth Clark's observation in Civilization on the growing elitism of the Dutch genre painters:

In 1660, he (de Hooch) was painting pictures of clean, simple interiors, their ordered space full of light. Ten years later his interiors were very elaborate, and instead of light whitewashed walls there was gold Spanish leather. The people were richer: and the pictures much less beautiful.

De Hooch's Woman Weighing Coins, painted around 1664, illustrates this surface glitter to perfection. His protagonist shrinks into her rich attire to such a degree that we barely see her face. The room's blaze of garish color differs drastically from the modest red skirt and yellow towel in de Hooch's earlier Woman Nursing a Child with a Child and a Dog (1658). 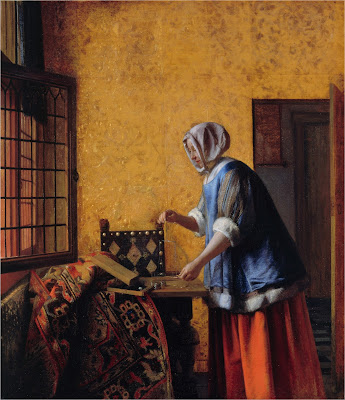 To their credit, the Dutch at the end of the seventeenth century did not entirely succumb to crass materialism. Most of these genre paintings, right up to the passing of the Gouden Eeuw, made an effort to balance the affairs of the soul with those of the body. Vermeer's Woman Holding a Balance is just the best-known in this respect .

It is measure of the Dutch achievement in art, science, philosophical inquiry and religious toleration that their Gouden Eeuw came closest to being an actual golden age, more so than any other society in recorded history. 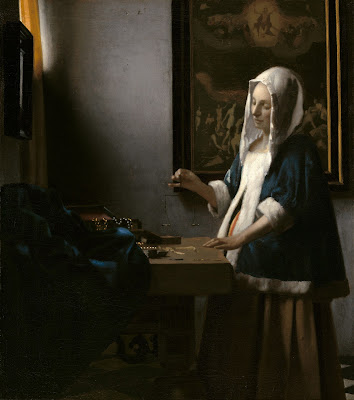 The quiet dignity, simple joys and - occasionally - ribald sensuality that we see displayed in these wondrous genre scenes on view at the National Gallery of Art testify to the core humanity of the Dutch during their golden century of achievement.

God made the world, as the old proverb declares, but it was the intrepid, freedom-loving Dutch who created Holland. These endearing genre scenes from the age of Vermeer are the art works that the Dutch painted on their day of rest.