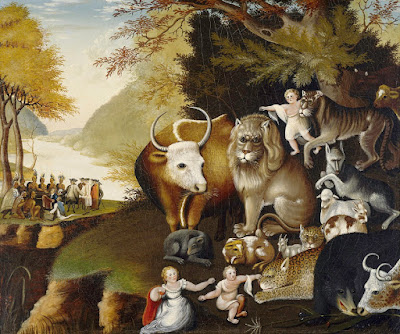 On his way to take the Oath of Office as President of the United States in February 1861, Abraham Lincoln stopped at Trenton, New Jersey, to address the legislature of that state. After alluding to the great Revolutionary War battles of Trenton and Princeton, Lincoln made a reference to the religious ideals of the American people, as well as the tense political situation.

I am exceedingly anxious that this Union, the Constitution, and the liberties of the people shall be perpetuated in accordance with the original idea for which that struggle was made, and I shall be most happy indeed if I shall be an humble instrument in the hands of the Almighty, and of this, his almost chosen people ...

God's "almost chosen people" are the subject of an excellent, year-long, exhibit at the Smithsonian's National Museum of American History. Beginning with the arrival of Christianity in what is now the United States, Religion in Early America surveys a long span of history from the early decades of the 1600's to just before the Civil War. 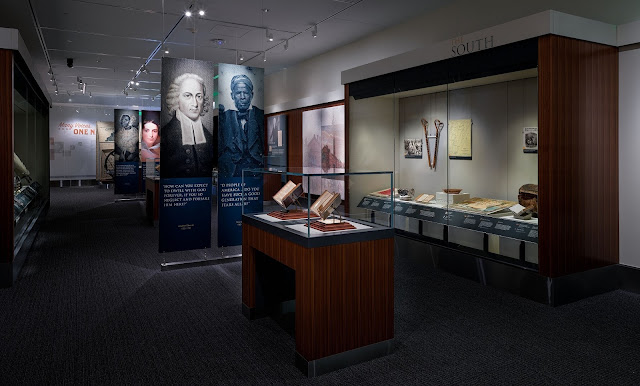 Gallery view of the Smithsonian exhibit, Religion in Early America

From the establishment of the first English "plantations" or settlements in the New World, Protestantism defined the spiritual expression and codes of morality of the majority of "early" Americans. However, the idea of an "established church" never took hold, either in the  English-speaking colonies as a collective entity or in the individual "plantations."

Diversity categorized the religious lives of "early" Americans. Dissent and divisiveness affected virtually every denomination at some point during the long period covered by the exhibition. Even the Society of Friends was periodically embroiled in controversy.

Edward Hicks (1780-1849), painted sixty-two versions of the Bible verse from the Book of Isaiah (11: 6-8) which proclaimed "the wolf shall dwell with the lamb, and the leopard shall lie down with the kid." Hicks, a Quaker from Bucks County, Pennsylvania, did not live in such a "Peaceable Kingdom" himself. The Quakers were bitterly divided by a doctrinal dispute, sparked by the "inner light" teachings of Hicks' cousin, Elias Hicks, which many interpreted as contradicting established rules of religious observance.

Religious controversies, long a feature of European society, soon left their mark on the fledgling colonies. Some of the ruling elites made concerted efforts to enforce conformity, especially in Puritan New England.

The exhibit highlights two artifacts that testify to this struggle. On display are the chalice of John Winthrop (1588-1649), the brilliant "enforcer" of Puritan orthodoxy in Massachusetts, and the compass - sundial of Roger Williams, founder of Rhode Island. 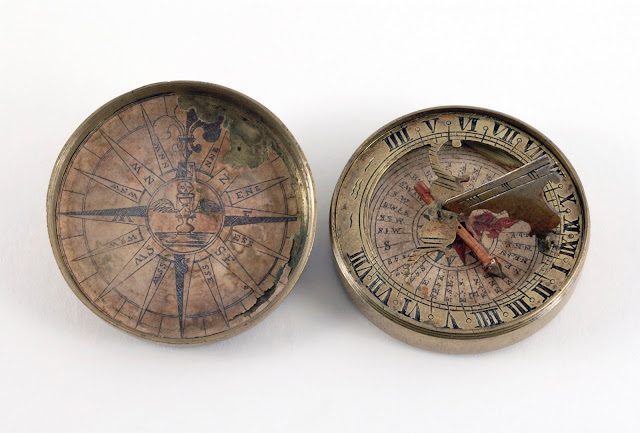 Roger Williams (1603-1683) was a Puritan clergyman of radical views. Refusing to adhere to the orthodox Calvinism of the Puritan elite, Williams was banished from Massachusetts in 1635. Williams used this compass to explore sites in the wilderness to build a refuge for fellow victims of Winthrop's implacable enmity.

Religion in Early America also examines Native American religious practice, the fascinating story of how religion has shaped the African-American struggle for justice and the story of America's Jewish community, small in numbers and hugely significant in patriotism and public service. 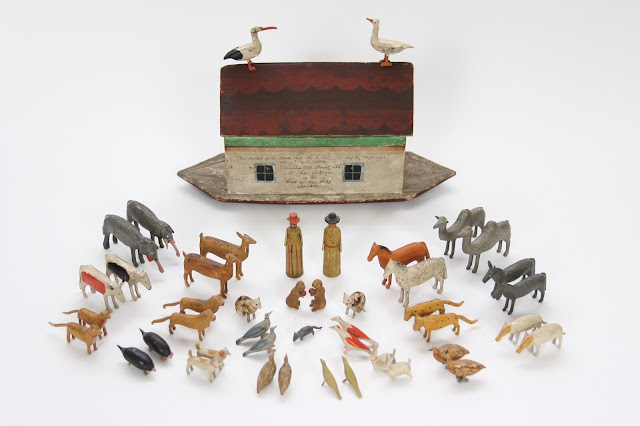 All of the exhibition artifacts are well-chosen to illustrate the profound religiosity and cultural diversity of colonial America and the early Republic. This toy ark, intended for Sabbath Day play, shows how seriously people took religious observance.

However, the organizational framework of Religion in Early America is open to question.  The curators, faced with so many "varieties of religious experience" (to borrow the title of William James' famous book) organized the exhibit on a geographical basis.

Regional factors, rather than adhering to a timeline, provides the focus of the exhibit. For the early chapters of American religious history, regionalism works as a satisfactory method to organize the great mass of material. As the pace and scope of America's development increased, however, regionalism's usefulness falters.

The Great Awakening evangelical movement of the 1740's was the first widespread event in American history. The preaching and published sermons of George Whitefield and Jonathan Edwards inspired congregations from New Hampshire to Georgia. The Great Awakening was a precursor to the political Revolution that took place thirty years later.

Following the Great Awakening, regionalism steadily declined as a factor in American religious life. The life of Lucretia Mott (1793-1880) illustrates this trend.

Lucretia Mott was born in Nantuckett, Massachusetts fifty years after the Great Awakening. Her austere bonnet is on display in the section of the exhibit devoted to New England. This is misleading placement. Though born in New England, Mott was hardly more than an "ex-pat" from that region. 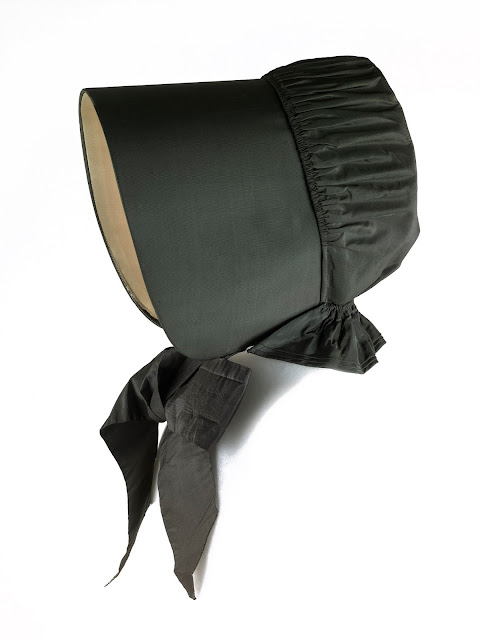 Mott, one of the greatest Abolitionist leaders, was educated in New York and resided for most of her life in Philadelphia - when she was not travelling around the U.S. or visiting England in order to preach the cause of freedom for African-Americans and later the right to vote for women.

Mott was a national figure, indeed, an international force for good. She transcended state borders, appealing to hearts and minds across the nation and the world.

Religion in Early America is too important an exhibition to get side-tracked by its regional orientation. A better technique to appreciate its many treasures is to focus on selected objects as they strike your interest and then relate these to a similar - or a very different - artifact. There are certainly plenty of outstanding exhibit treasures to compare and contrast.

One of the most intriguing displays in the exhibit is a a small beribboned box containing two crucifixes and a religious medal worn by the African-American, Roman Catholic nun, Elizabeth Lange (later Mother Mary Lange). These were discovered when the body of Mother Lange was exhumed as part of the process of officially bestowing sainthood upon her. 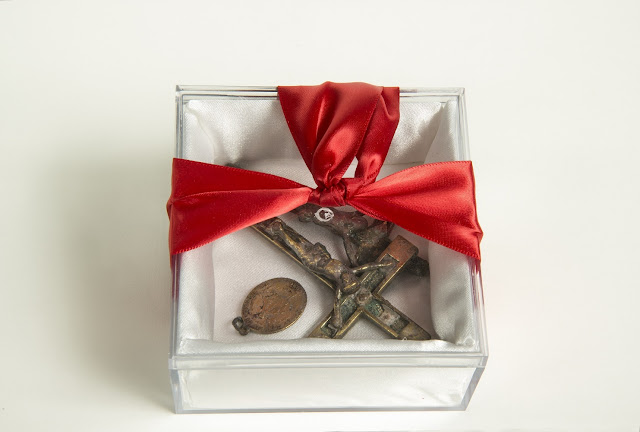 Born in Cuba, Elizabeth Lange (1794-1882), devoted herself to teaching children of African-descent in Baltimore. In 1828, a French priest,  Father James Joubert, supported Lange and three other devout African-American women in founding a religious order of nuns, the Oblate Sisters of Providence.

In 1836, a school building run by the Oblate sisters was opened and, for a time, achieved considerable success. The 1840's were a decade of severe economic instability following the Panic of 1837. Financial support for Mother Lange and her sisters diminished. At one point, they were forced to ask permission from Church authorities in Baltimore to beg on the streets to support their school.

A German-born priest of the Redemptorist order, Father Thaddeus Anwander, came to their aid and the Oblate sisters were saved from financial ruin. Their school and mission expanded to other cities in the U.S., and later to Cuba, until Casto's communist regime forced them out, and Costa Rica where the Oblate Sisters still flourish.

By way of comparison with Mother Lange's crucifixes, the saddlebags of an itinerant Methodist preacher serve as an excellent counterpoint. 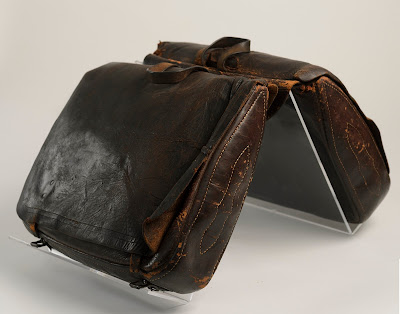 Freeborn Garretson (1752–1827) was born in Maryland, where Mother Lange was later to work. When he inherited several slaves, he experienced a spiritual vision which turned him into an ardent abolitionist. Garretson's crusading zeal encouraged the emancipation movement in Maryland and Delaware. Among those set free was Richard Allen (1760-1831) who later founded Mother Bethel Church in Philadelphia in 1794, the first independent African-American church in the U.S.

Another treasure of the exhibition is the Torah scroll from Congregation Shearith Israel in New York City. During the Revolutionary War, the British Army occupied New York in 1776. Congregation Shearith Israel's synagogue was looted by British soldiers and this Torah scroll, and one other, were desecrated. In an effort to regain community support, the British high command ordered the offending soldiers flogged and one of them died from his wounds. 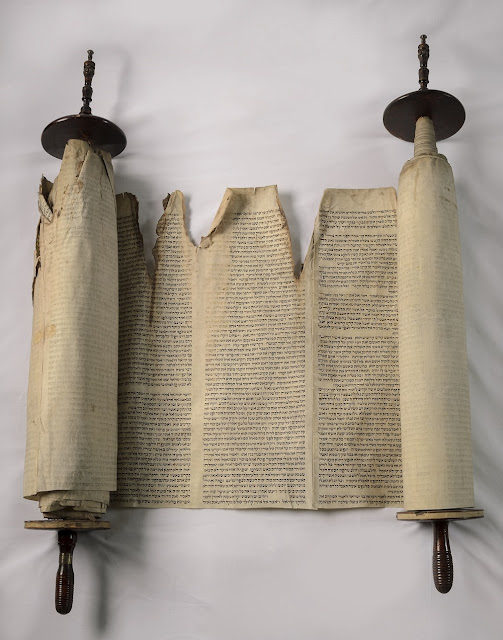 Congregation Shearith Israel was founded in 1654, the first Jewish congregation to be established in North America. These Torah scrolls were carefully preserved, though longer fit for actual religious services, as relics of the storied past of this historic faith community.

The history of American religion does not always yield its secrets so readily as Mother Lange's crucifixes or the Congregation Shearith Israel Torah scrolls. The material remains of religious movements - a book of sermons or a painting of an event in sacred history - can appear as arcane, almost alien artifacts to modern day museum goers.

Thomas Jefferson solved the problem of religious doctrine by literally cutting out of the Bible all that he refused to believe, including the miracles performed by Jesus. Jefferson produced an abridged version of the New Testament gospels, 84 pages in length, with all of the "nonsense" excised with a pen knife. 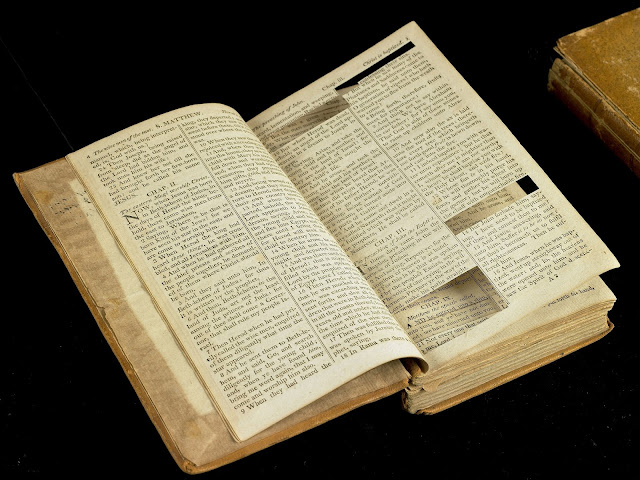 Thomas Jefferson's The Life and Morals of Jesus of Nazareth (1820)

The Jefferson Bible or The Life and Morals of Jesus of Nazareth (1820) was never published in Jefferson's lifetime or for many decades thereafter. Jefferson's original copy is on view in the exhibit. It is a rare treat to see such a fabled treasure, but it is disturbing too.

Jefferson was the greatest political thinker to ever occupy the White House. As a man who embodied the Age of Reason, Jefferson could hardly have remained untouched by the secularizing philosophy of his era. Yet, cutting-out the unpalatable passages of the Bible was disturbingly like the willful mishandling of the escalating controversy over slavery.

Jefferson and most of the other leaders of the new United States were deeply troubled by the moral and political implications of slavery. Yet, they devoted little effort to redress this wrong. Believing that the inherent strengths of the nation would suffice, the Founders trusted that slavery would wither away on its own. A nation of small farmers would arise. Reason would triumph.

None of this happened. The "Era of Good Feelings," during which the aged Jefferson worked on his Life and Morals of Jesus of Nazareth, lasted but a few short years.The scandal of slavery in the land of freedom could not be brushed aside.

Along with Jefferson's The Life and Morals of Jesus of Nazareth, the exhibit displays the Bible used for George Washington's inauguration as the nation's first president on April 30, 1789. This copy of the Bible was loaned to Washington by the St. John’s Masonic Lodge in New York City. Printed in London in 1765, it is a King James Version Bible, Old and New Testament with Apocrypha. In a thoroughly eighteenth century touch, an appendix with historical and scientific data was included. 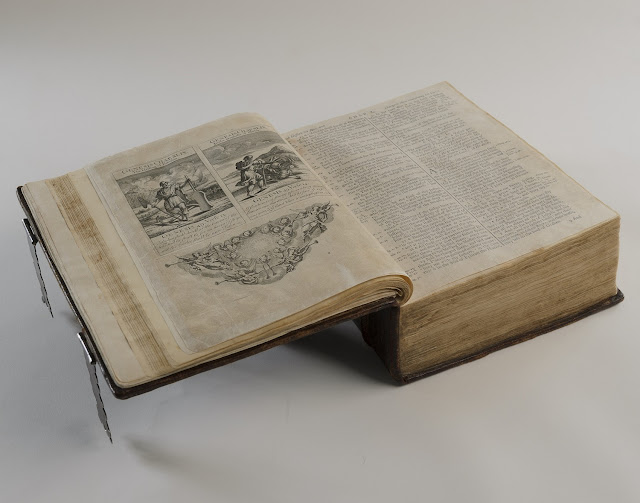 Washington selected Genesis 49 as the chapter to be opened upon which he would place his hand. This was the Bible passage in which the dying patriarch, Jacob, blesses and admonishes his sons, the leaders of the twelve tribes of Israel. Washington, often ridiculed (behind his back) for his lack of education, chose a "text" of special relevance for the thirteen "tribes" engaged in forming a new nation - and for us, their descendants and heirs.

All these are the twelve tribes of Israel: and this it is that their father spake unto them, and blessed them: every one according to his blessing he blessed them.

One can only hope that the Smithsonian will create a follow-up exhibition to Religion in Early America. The story of how the religious principles of God's "almost chosen people" were put to the test as they sought a "new birth of freedom" is ever timely.

Noah’s Ark Playset, 1828.  Made in the United Kingdom. Loan from collection of Judy and Jim Konnerth