Art Eyewitness Looks at the Art Scene in 2017 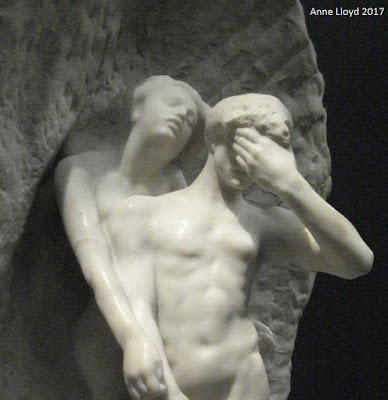 Reflections on the Art Scene during 2017

The art world commemorated the life of sculptor, Auguste Rodin, in 2017. Rodin died one hundred years ago, as did Edgar Degas. The "War to End All Wars" was raging in all its pointless fury, destroying much of the civilization that Rodin and Degas had enriched with their works of art. The death of these great artists represented the end of an era and it is only natural to look back on their achievements as counterpoints to the mindless waste of life that was World War I.

To "look back" comes naturally to human beings. One can look back with nostalgia or with hesitation or "look back in anger" as in the case of John Osborne's 1950's play. We live a lot of our lives, toeing the water of the future, glancing over our shoulders at the past.

One of Rodin's greatest works, small in scale but astonishing in its power, treats such a moment of looking back. Orpheus and Eurydice depicts the moment when the mythological hero, Orpheus, makes the fatal mistake of checking if his wife has escaped from Hades. 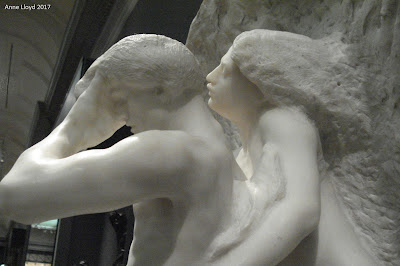 Orpheus' bid to rescue Eurydice from Hades depended on not look upon her until she is safely beyond the gate of Hades. Yet, on the brink of escape and triumph, he looks back -thus dooming Eurydice to oblivion.

Orpheus and Eurydice is on display in an excellent exhibition honoring Rodin at the Metropolitan Museum of Art, on view to January 15, 2018. Rodin's works appear in all their glorious variety - sketches, plaster models, finished sculptures -  in the Met's B. Gerald Cantor Sculpture Gallery. Down the hall is an exhibit of the drawings (plus a few sculptures) of a man with whom Rodin is often compared: Michelangelo.

Michelangelo: Divine Draftsman and Designer is one of 2017's stellar exhibitions. The lighted photo version of the Sistine Chapel ceiling frescoes is a spectacular feature of the exhibit in the Metropolitan's Tisch gallery. 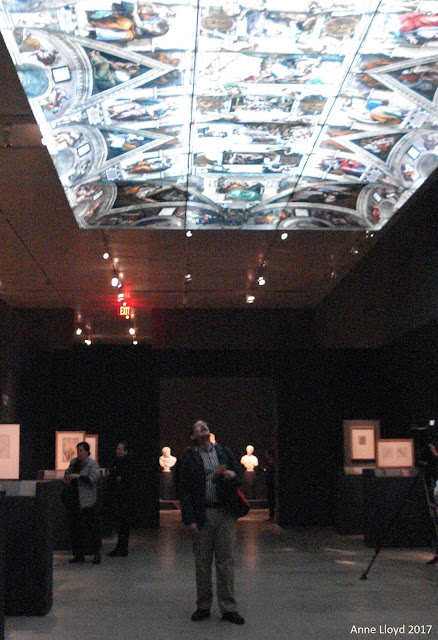 As magnificent as this recreation of Michelangelo's magnum opus is, the really significant feature of the exhibit is the rare opportunity to study drawings by the great Florentine master of disegno.

The art of disegno or drawing was so omnipresent in the exhibits that featured in Art Eyewitness that this proved to be the dominant theme for 2017.

There were outstanding exhibits of painting, sculpture, photography, fashion and ceramics during 2017, too. The National Gallery of Art in Washington reawakened memories of one of their greatest triumphs, the fabled 1995 Vermeer exhibit, with a superb presentation of Dutch Golden Age painting, Vermeer and the Masters of Genre Painting: Inspiration and Rivalry (October 22, 2017 - January 21, 2018) 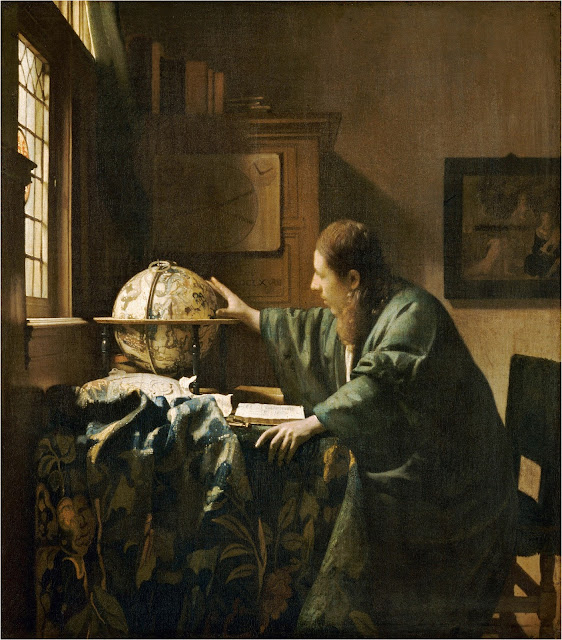 The Vermeer show came close to rivaling the 1995 exhibit, but it is worth remembering that in 2016, the National Gallery presented Drawings for Paintings in the Age of Rembrandt which emphasized the role of sketching and draughtmanship in seventeenth century Holland.

Time and again, 2017 exhibitions dealing with drawings delivered the greatest impact. Drawing, "the pencil of nature" as it was called during the eighteenth century, comes closest to the individual artist's perception of the world as he or she directly sees it.

To make a drawing is an act of looking back at nature or at a person we esteem without experiencing the tragic fate of Orpheus and Eurydice. Drawings are investments of time, talent, energy and belief in the future.

Two exhibitions at the Morgan Library and Museum during 2017 proved the power of drawing with special force.

The highlight of Treasures from the Nationalmuseum of Sweden at the Morgan (February 3 - May 14, 2017) was supposed to be François Boucher's The Triumph of Venus, 1740. This painting was the pride and joy of the Swedish emissary to the court of Versailles, Count Carl Gustaf Tessin (1696-1770). Tessin also purchased superb drawings - and nearly bankrupted himself in the process - by Rembrandt, Dürer, Watteau and others. These drawings are so far above Boucher's erotic "eye candy" in quality that I spent most of my time studying them rather than the voluptuous Venus and her minions.
Of course, Rembrandt, Dürer and Watteau are pretty stiff competition for any artist to encounter. However, I felt the same about the drawings of an obscure French artist,
Nicolas de Plattemontagne (1631–1706) when compared to Boucher or other French eighteenth century painters like Fragonard. I had never even heard of Nicolas de Plattemontagne before seeing this magnificent study of hands and drapery at another Morgan exhibit, Poussin, Claude, and French Drawing in the Classical Age, June 16 - October 15, 2017. 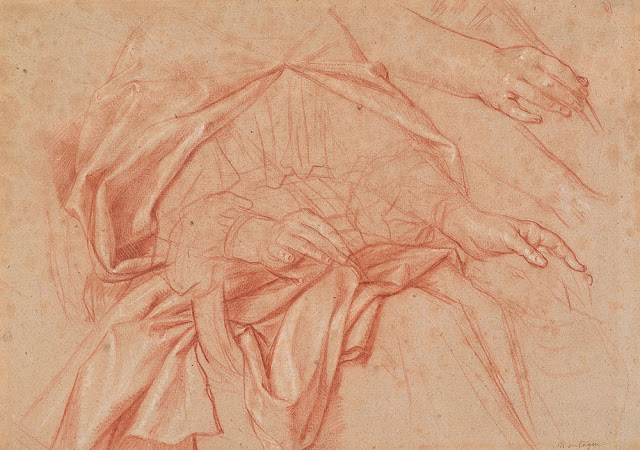 In popular estimation, French art of the seventeenth century usually ranks well-below Dutch art of the same period. The Morgan exhibit of French drawing was a revelation not because it proved the facility of Nicholas Poussin and Claude Lorrain in drawing. That hardly needs emphasizing. Rather, by showcasing an unknown (to me at least) artist like De Plattemontagne, the importance that was attached to drawing by the Academic establishments of Europe was highlighted and underscored.

To be a successful artist in the Western world between the Renaissance and the Second World War, you needed to be skillful in drawing. It says something about the crisis of confidence in the West today, that the importance of drawing well is no longer insisted upon as a hallmark of a successful artist.

This comment is not intended as an editorial rant. There are still many great artists, technically proficient and artistically inspired. 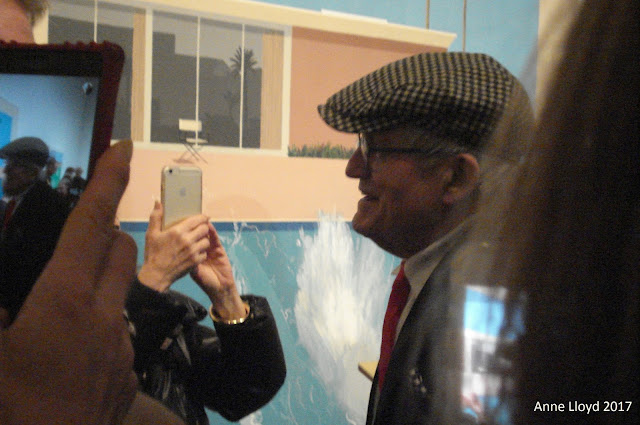 It was a great experience to attend the press preview in November 2017 at the Metropolitan Museum of Art for the David Hockney exhibit. Hockney made an appearance at the preview, a moment I will long cherish.

To everyone's delight, Hockney made the rounds, subjecting himself to a barrage of digital cameras and phones. There is certain appropriateness to this, as Hockney has been a bold innovator using everything from a Polaroid camera to the iPad and iPhone to further his explorations of landscapes and people.

Hockney remains a staunch believer in the discipline of drawing. "Teaching someone to draw," Hockney affirms, "is teaching them to look."

I came across this quote in a book I read while working on my review of the Hockney exhibition: Martin Gayford's, A Bigger Picture: Conversations with David Hockney (Thames & Hudson, 2016 edition). Gayford and Hockney are a brilliant team and their engaging dialogue on the nature of art is hugely enjoyable and thought provoking.

The Yorkshire-born artist told Gayford that he believed one of his ancestors had been "a cave artist who liked making marks on the wall." In short, Hockney's distant relative had been an experimenter in art, innovating with a piece of chalk the way Hockney has adapted the iPhone to be his sketchbook.

Yet, Hockney does not believe that new modes of technology will make traditional drawing or painting obsolete. Rather, drawing and painting are primal modes of human expression. Mass media like films and newspapers are being edged aside by the iPhone and the iPad. 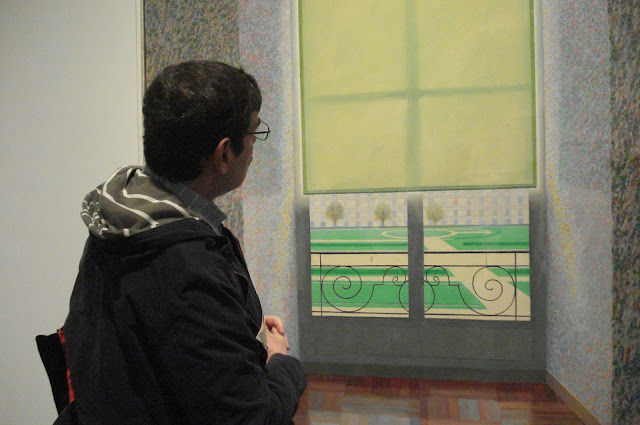 Hockney believes that drawing and painting will endure. The whole person is engaged in these modes of artistic expression, especially in drawing. Hockney confided to Gayford:

When you are drawing, you are always one or two marks ahead. You are always thinking. 'After what I'm doing here I'll go there and there.' It's like chess or something. In drawing I've always thought economy of means was a great quality - not always in painting, but always in drawing. It's breathtaking in Rembrandt, Picasso and van Gogh. To achieve that is hard work, but stimulating: finding how to reduce everything you've looked at to just lines -  lines that contain volume in them.

Along with seeing Hockney at the Metropolitan Museum, my wife Anne and I met one of the great nature photographers of the present age, Michael Nichols, at the Philadelphia Museum of Art. Nichols' photos are awesome (for once the word is used accurately). 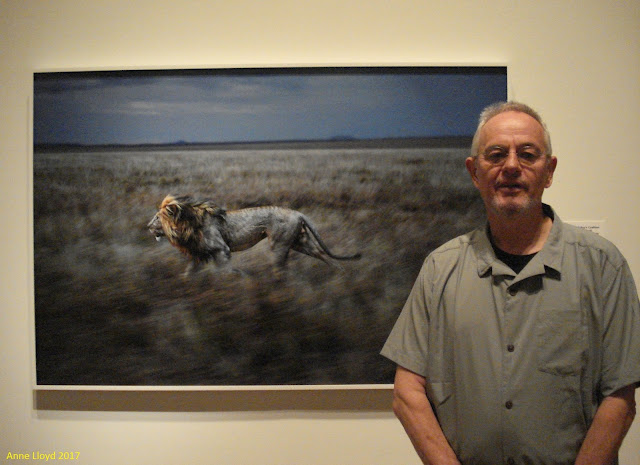 Nichols' stunning images of the remnant of Planet Earth's undomesticated animals were displayed in brilliant contrast to selected works of art from the Philadelphia Museum of Art collection. Wild: Michael Nichols, as the exhibit was called, was the big summer exhibit at the Philadelphia Museum of Art. Then it traveled to the National Geographic Society Museum in Washington D.C. where it will be on view until January 12, 2018.

Wild or domesticated, every animal is a unique individual. Each animal exerts a dynamic presence in the world and in the lives of those humans lucky to create a bond or relationship with them. Anne and I were blessed to enjoy the friendship, support and example of Lily for nearly sixteen years. Lily, the Queen, could only be described as "indomitable."

One of my favorite pictorial themes is the story of St. Jerome and the Lion. Lily was our Lion. Like St. Jerome's companion, who had a thorn in his paw that Jerome removed, Lily faced many physical challenges. She survived a stroke two years ago which left her limping but unbowed. 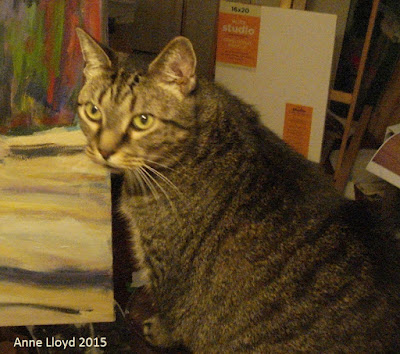 Lily was the guardian of my wife's painting studio just as St Jerome's Lion guarded his study. Lily certainly ran a "good ship"  and Anne was never without companionship as she created her beautiful art.

On December 19th, we had to save Lily from further physical suffering. Sadly, there was no thorn for us to remove that would enable Lily to resume her watch in the studio. We had to free Lily's spirit to spare her pain and now Lily's spirit is free.

Art is an act of freeing the spirit. Art enables us to engage the creative energies within ourselves, letting these spirits express themselves. And these spirits, once engaged will emerge, ready, willing and able to assert beauty in an often ugly, uncaring world.

2017 was a difficult year in many ways. Yet, the creative spirits were always in evidence in our lives. One such magic moment occurred when a monarch butterfly paid a late autumn visit to the zinnias in our neighbor's garden. 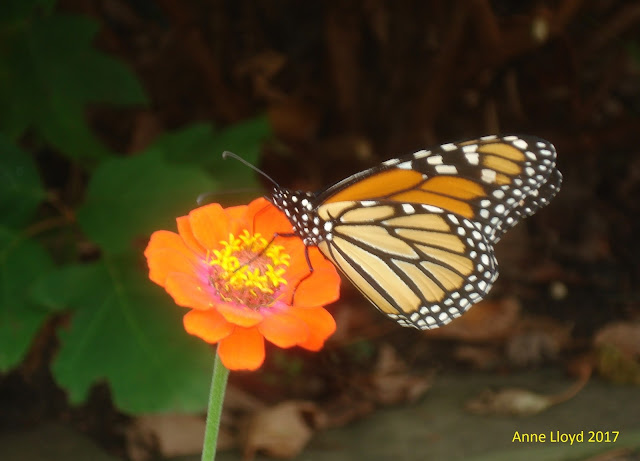 Anne snapped this marvelous photo. It is proof, if any is necessary, that life's "wild"  moments  - and beautiful ones - are not as rare as we sometimes mistakenly think.

May the coming year, 2018, provide us all with many such moments.

Posted by Art Eyewitness at 1:01 PM