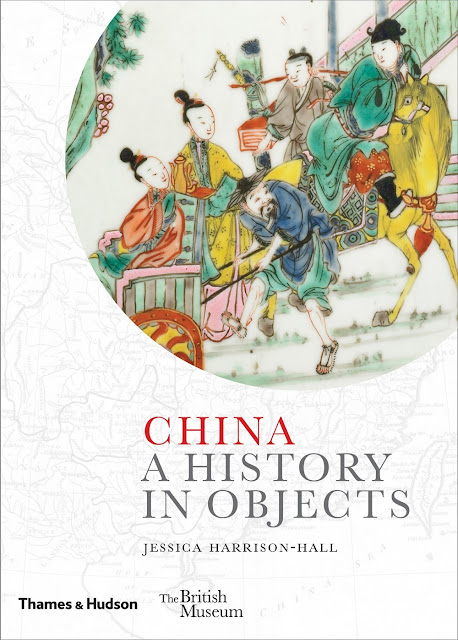 China: a History in Objects

A similar book, just published by the British Museum and Thames & Hudson, explores the history of China. It is worth pausing a moment to reflect on the title of this splendid volume, China: a History in Objects.

There is no mention of one hundred or two hundred objects.

China's astonishing cultural achievements - past and present - cannot be limited to examining a few signature works of art, even ones as radiantly beautiful as the decorated  bronze mirror from the Tang Dynasty (ca. 700-800 AD). Mother-of-pearl was used to create a miniature lotus pond with swimming Mandarin ducks on the back of the mirror. Truly a symbol of eternal China, but only one of many. 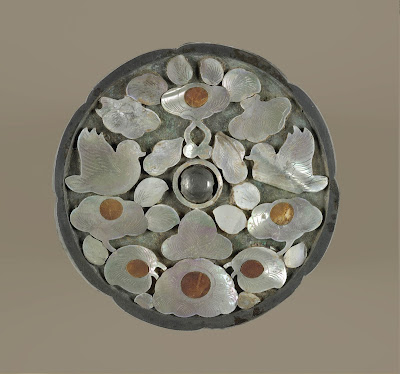 The new book coincides with the opening of a magnificent new gallery at the British Museum for the display of treasures of Asian civilization.

In November 2017, Queen Elizabeth II visited the British Museum for the dedication of the new gallery devoted to the art of China and India, named for the philanthropist, Sir Joseph Hotung. The British Museum's vast collection of Chinese art, among the best in the world, serves as the source for almost all of the works discussed in this book.

The timing of the publication of China: a History in Objects also comes at a moment when China is poised to take a dominant position in world affairs, politically and economically. The British Museum book is commendably free of propaganda. The "objects" in the book speak for themselves and demonstrate the worldwide impact of Chinese creativity that weapons and armies of China have never achieved.

Blue-and-white porcelain is the best exemplar of the way that beautiful and useful objects from Zhōngguó (as the Chinese call their native land) have transformed the world. Durable ceramics in China can be dated back to the Hemudu culture, five thousand or more years ago. White porcelain most likely was introduced under the Tang Dynasty (618–907 AD) but it took several centuries to develop the techniques that earned "china" its global status.

The startling blue glaze of the blue and-white porcelain was produced from cobalt. Ironically, this "trademark" color was a legacy of the Mongol invasions of China and the Yuan Dynasty they subsequently imposed in 1279 on the entire country. Blue cobalt glaze traveled to China from the Middle East along the trade routes dominated by the Mongols.

China has a habit of conquering its conquerors. When the Ming Dynasty ousted the Mongols in 1368, Chinese blue-and-white porcelain became the first global industrial product. During the dynamic early phase of the Ming hegemony, maritime fleets sailed from China to the Middle East and Africa carrying porcelain of various hues and designs. Later, as Ming power declined, European merchant ships appeared in port cities like Guangzhou. Blue-and-white "china" was at the top of their shopping list.

The British Museum book discusses the great variety of design patterns and uses of blue-and white porcelain under the Ming dynasty. A particularly significant piece is an incense censor decorated with an episode from the classic Chinese novel, The Romance of the Three Kingdoms. In this scene, the hero, Zhao Zilong, rescues a child, wrapped in his cloak, from the pursuing soldiers of the evil General Cao-Cao.

Detail of a Ming-era Porcelain Censer,1625,
showing a scene from The Romance of the Three Kingdoms

The Romance of the Three Kingdoms was based on actual events, the downfall of the Han Dynasty in 220 AD. It is interesting to compare the scene of daring deeds on the censor with Cinemascope movie heroics of films like Ben-Hur and El Cid.

The achievements of the Ming Dynasty,1368-1644, take on added importance in this book because the British Museum mounted a special exhibition devoted to this Imperial regime in 2014. However, China: a History in Objects is a remarkably balanced book. Less famous epochs, like the Song Dynasty, receive their due from the author, Jessica Harrison-Hall, who is the chief curator of Chinese art at the British Museum.

The Song Dynasty, which replaced the more renowned Tang, was continually attacked by nomad raiders until it was finally crushed by the Mongols. After its northern territories were lost, a cultural renaissance of sorts under the Southern Song took place, 1127 to 1279 AD.

A spectacular example of the Southern Song creative genius is included in the book. Made of black glazed stoneware, its sole decoration was a leaf placed on the glaze before being fired in the kiln. The actual leaf was burned away during the firing, but an impression remained, singularly beautiful and imperishable. 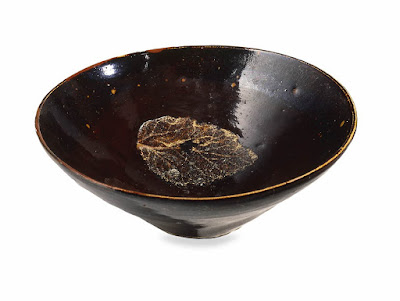 This Blackware tea bowl is one of the most striking works of art in the book and - to me at least - far more meaningful than the world-famous ceramic soldiers from the tomb of the First Emperor, Qin Shihuangdi, 221-210 BC. This tea bowl was created nearly one thousand years ago and yet would bring high praise for any ceramic artist capable of making it today.

The two dominant features of Chinese artistic achievement are reverence for the past and the importance of outside influences. The Ming-era censor celebrates China's past, while the practical purpose of the Southern Song bowl was tea drinking, an import from India during the late Tang era.

Incense vessels and tea bowls alone cannot do justice to these two essential features of Chinese culture. Signature artworks from the British Museum such as Shang bronzes from ca. 1000 BC and splendid Buddhist sculptures enable us to grasp the importance of the precepts of Chinese civilization. 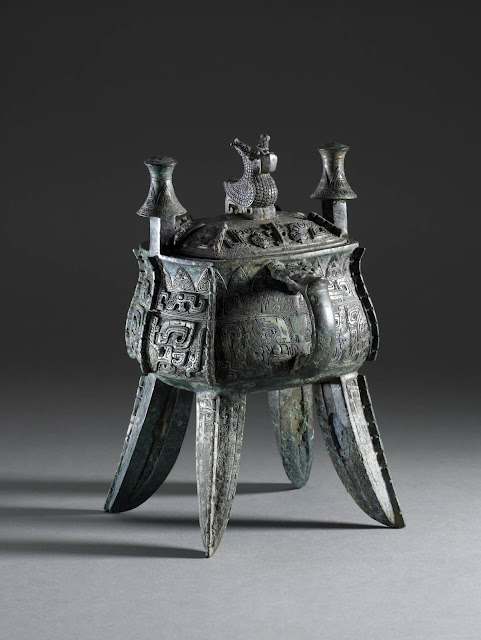 Reverence for the past, especially for one's ancestors, occasioned China's first great art works, the Shang ritual wine and food vessels. Offerings were left at the tombs of the dead in these spectacular bronze vessels, cast in ceramic piece molds.

These works of art represent the visible birth of Chinese civilization, though the skills needed to create the Shang bronzes were developed and refined over the preceding centuries.

Tea was introduced to China from India by wide-travelling Buddhist monks who spread the word of the new faith. These religious emissaries brought theological teachings and religious imagery that continue to inspire the estimated 245 million Buddhists in China.

Few of the ideals and images of Buddhism had greater appeal than the cult of Guanyin. As with the veneration of the Virgin Mary in Christendom, Guanyin, the Goddess of Mercy, was embraced with fervent devotion by China's people and throughout East Asia. 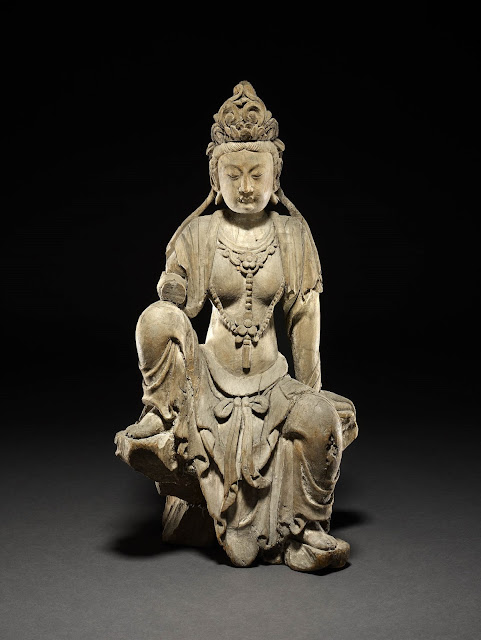 The appeal of a compassionate supernatural being like Guanyin is of course universal. But there is a undercurrent to Chinese history which may not be apparent in a book like China: a History in Objects.

China's long-suffering peasantry and the well-educated elite have both endured much at the hands of invaders, from the rampaging horsemen of Mongolia during the Middle Ages to the ruthless Japanese invasion which lasted from 1937 to 1945. The most devastating wounds, however, have been inflicted by the centralized, bureaucratic governments of one Chinese dynasty after another. Foreign "devils" often administered the final death blow to regimes which had treated the people of China very poorly indeed.

The fate of the Ming Dynasty graphically demonstrates this tragic aspect of Chinese history. After a brilliant beginning, the Ming court lapsed into a downward spiral of greed and arrogance, political incompetence and disregard for the starving, over-worked populace. In 1644, widespread internal revolts opened the gates to invaders from Manchuria, who established the Qing Dynasty which was to last until 1911.

In the British Museum collection is a painting album that illustrates the human cost of China's violant history. Entitled Eight Views of the South, it contains eight scenes that, on first sight, seem entirely peaceful and harmonious. Yet these remarkable landscapes testify to the bitter cost of rebellion and civil war.

The creator of Eight Views of the South was a Ming prince named Zhu Ruoji. He was born in 1642 and was only an infant when the Manchurian invaders swept in from the north. After the Qing dynasty was established, a purge of the surviving Ming royal family ensued. Zhu Ruoji evaded death by becoming a Buddhist monk and later a Daoist, taking the name Shitao by which he is known in history. 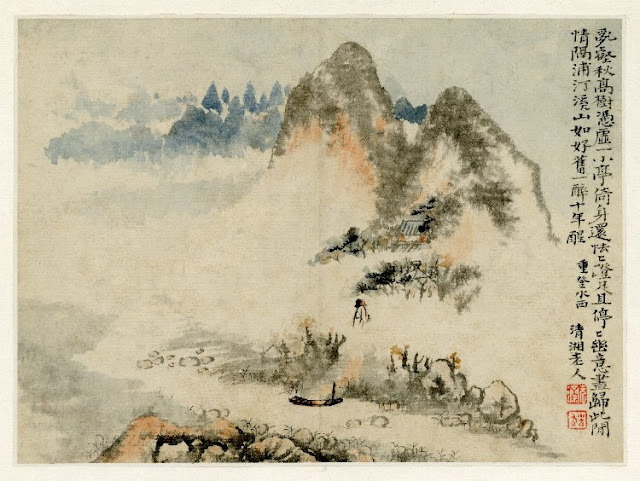 Look closely at this album leaf and you will see a wandering sage ascending a mountain in search of contemplation, peace and truth. What a compelling scene this is! It comes close to being the real self-portrait of Shitao, though he did paint an actual one of himself, sitting beneath a gnarled pine tree.

Shitao was a remarkable figure, one of history's great artist-philosophers. Shitao created his paintings from a state of "no mind" where the spirit leads and the human intellect follows. He once wrote: 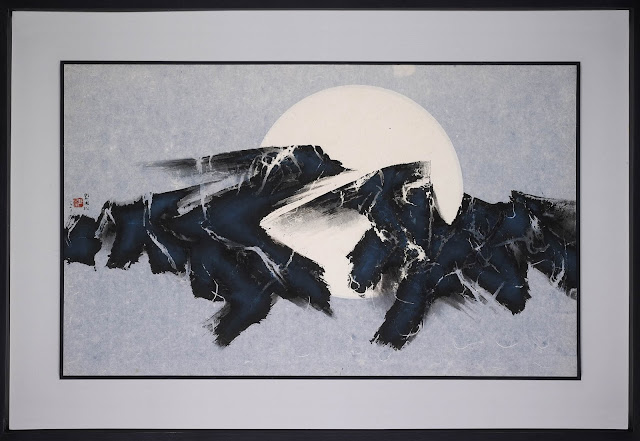 How wonderful it is to see the modern day painting by Liu Kuo-sung in the concluding chapter of China: a History in Objects. Born in 1932, Liu escaped from Communist rule by going to Taiwan in 1949. He continues to paint in the tradition of great masters like Shitao, while also adapting to the new age of science and technology.

This 1970 painting was inspired by the U.S. Apollo 11 mission to the moon. It shows the earth and the sun/moon exchanging energy. It is a brilliant work, a testament to the continuing two-fold basis of Chinese creativity. Reverence for the past motivated Liu, as did the example of humanity reaching toward the heavens.

As long as wandering sages and aspiring artists of China look toward the mountain top, then the great ideals of Chinese art discussed in this impressive, thoughtfully written book will find new ways to make their mark.

***
Text: Copyright of Ed Voves, all rights reserved
Translation of Shitao's reflections on art by Dr Mae Anna Pang, Senior Curator of Asian Art, National Gallery of Art,Victoria, Australia (in 2007). The quotation comes from the article by Dr. Pang, "An Orthodox Master and an Individualist: Wang Yuanqi and Daoji".

Images Courtesy of the British Museum


Detail of Ming-era Porcelain censer,1625. The glazed decoration shows a scene from The Romance of the Three Kingdoms, Chapter 41, attributed to the late Yuan/early Ming novelist Luo Guanzhong. The British Museum  Purchased from Bluett & Sons  #1971.0622.1 © The Trustees of the British Museum

Posted by Art Eyewitness at 6:17 PM