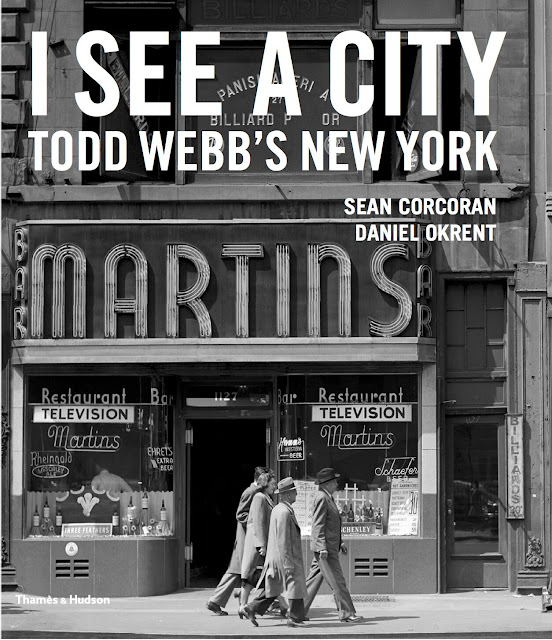 New York City is  ever-changing, always new. Freshly-minted every morning, the Big City is already evolving by nightfall into the next day's New York.

Occasionally, even New York City takes a "breather" before plunging back into the river of change.

In 1945, after a decade and half of economic depression and global war, a curious equilibrium occurred. This pause allowed a photographer named Todd Webb to immortalize the "rough-at-the edges" neighborhoods of Manhattan - Morningside Heights, Fulton Fish Market, the Bowery, Harlem. Careworn but proud, old New York posed for Webb for a brief moment before the incredible burst of modernist building of the 1950's-1960's transformed the city forever.

Webb's photographic journey through old New York is the subject of a brilliant book published by Thames & Hudson, I See A City: Todd Webb's New York. An exhibition of Webb's photos was presented last year at the Museum of the City of New York. 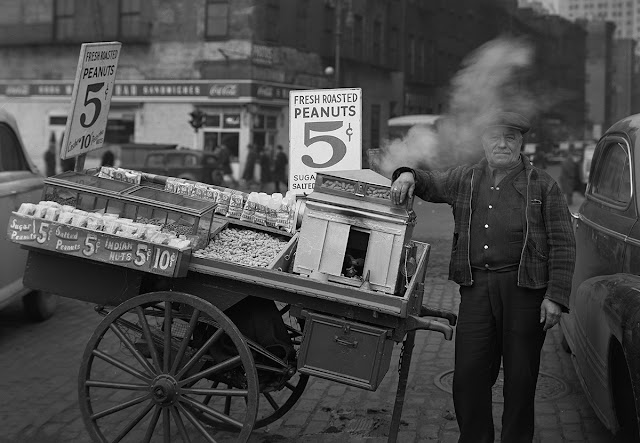 Todd Webb (1905-2000) came to New York after being discharged from the U.S. Navy in World War II. Webb had been a Navy photographer in the Pacific during the war. Before that he had led an adventurous life, filed with ups-and-downs. A stock broker wiped-out by the Wall Street crash in 1929, Webb prospected for gold in Panama, served as a forest ranger and took a crash course in photography with Ansel Adams.

Webb saved much of his wartime Navy pay and headed to New York in 1945. His plan was to photograph the daily life of New Yorkers and their neighborhood surroundings. This was New York before air conditioning, electric clothes dryers, television (except in some restaurants) - and the ruthless "development" schemes of Robert Moses.

Webb began with a series of photos of special relevance to himself - "welcome home" signs for New York men returning from military service in World War II. Implicit in these photos is the acknowledgment of the GIs who did not make it back. Webb recognized this in his daily journal, excerpts of which are included in the introductory essays of I See A City. 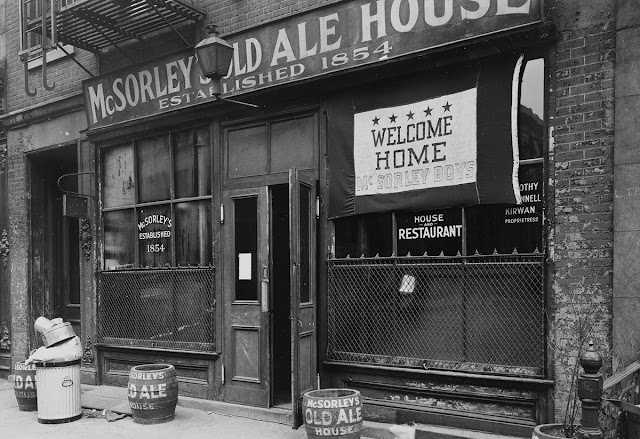 Webb succeeded brilliantly in documenting work-a-day New York, but his motivating idea was not original. Credit Berenice Abbott for that. Abbott (1898–1991) documented New York City for the Depression-era Federal Art Project from 1935 to 1939. Her photos, shown at the New York World's Fair in 1939 and the companion book, Changing New York, set American photography on a new path.

Webb took a momentous step in his art career before venturing forth with his 5x7 Deardorff large-format camera and tripod. En route to basic training in 1942, Webb stopped in New York and managed to meet Alfred Stieglitz (1864-1946), the elder statesman of American photography. Stieglitz could be quite disagreeable but he and Webb got along. In 1945, Webb was welcomed back to Stieglitz's gallery, An American Place, and until Stieglitz died in July 1946, consulted regularly with the "grand old man."

It was through Webb's relationship with Stieglitz that he met Berenice Abbott. Webb and Abbott established an artistic friendship of enduring value. Abbott was a generous person, as well as one of America's greatest photographers. She was responsible for ensuring that the pioneering photo work of Eugene Atget was preserved and made known to a wide audience.

Webb was obviously inspired by Abbott. Some of his images of old New York directly correspond to Abbott's. In 1946, Webb photographed Under the El, Third Avenue, 1946. A decade earlier, Webb had taken one of the most artfully composed photos in the history of the medium, Under the El at the Battery. Both photos deal with the same topic, urban life under the iron superstructure of one of New York's elevated transit lines. 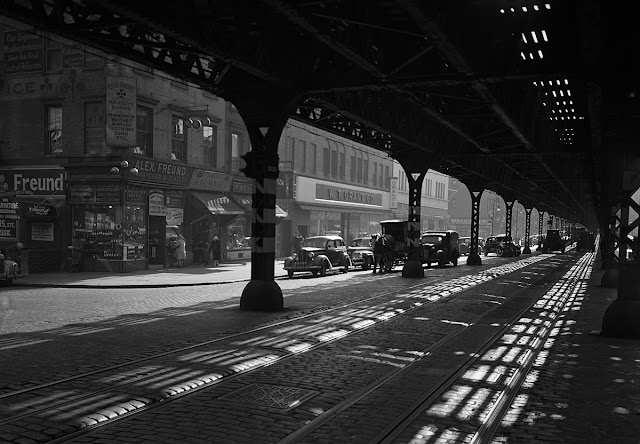 The differences between Abbott and Webb are crucial to the understanding of the latter's work. Sean Corcoran, whose perceptive essay on Webb, is included in I See A City, notes that the way the two photographers "approached their subjects was quite different. Webb focused more on capturing the last vestiges of old New York and was not nearly as interested as Abbott in the juxtaposition of the old and the new."

The horse-drawn cart clattering past the parked cars is the key to Webb's fixation with the past in Under the El, Third Avenue. In many of Webb's photos there is a small detail like this that gives special relevance to the entire picture.

If you study one of my favorite photos by Webb, 125th Street, September, 1946, it won't take you long to spot the key object. The young girl and her baby sister are sharing a snowcone, a paper cup filled with chopped ice and a squirt of fruit syrup. This precursor to water ice became a popular summer treat during the 1930's. But the snowcone isn't what your eyes fix upon. It's the shoes. 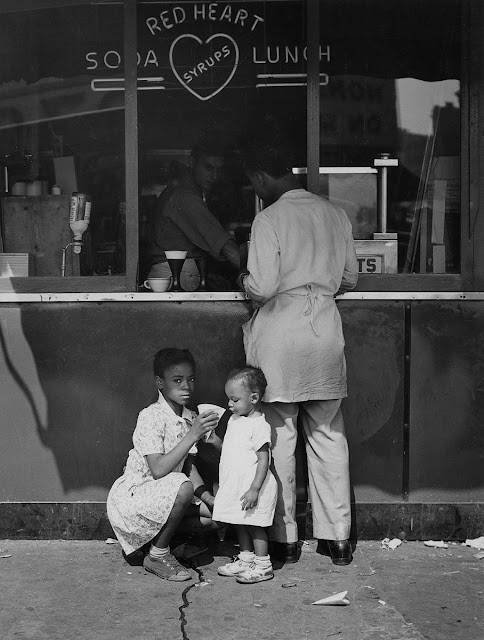 Webb did not have an overt political agenda in taking his photos. But the prominence of these scuffed, battered hand-me-down shoes asserts the hard lives of these children's family and community. The shortages of material goods in the U.S. continued for only a short time after the war, but inflation in 1946 soared to a staggering level, 18.1%. The nation's poor, especially African-Americans, had to keep on "making-do." The shoes that the toddler wears were likely worn by her big sister. But the sneakers worn by this older child are unlikely to have survived much longer.

Children figure in quite a number of Webb's greatest photos from the post-war years. Webb was not a "decisive moment" photographer like Henri Cartier-Bresson. Since Webb's bulky Deardorff camera took quite a bit of time to set-up, it is remarkable that he was able to achieve the degree of spontaneity that he did get.

In the case of one of Webb's most beloved pictures, LaSalle Street at Amsterdam Avenue,1946, the circle of children dancing around a sprinkler pipe looks like a posed shot. One of the girls looks over her shoulder, to see if Webb is taking the photo. In contrast, the book also includes two other, more natural, pictures of the same children, standing around, dripping wet, or hoping around in the sprinkler. 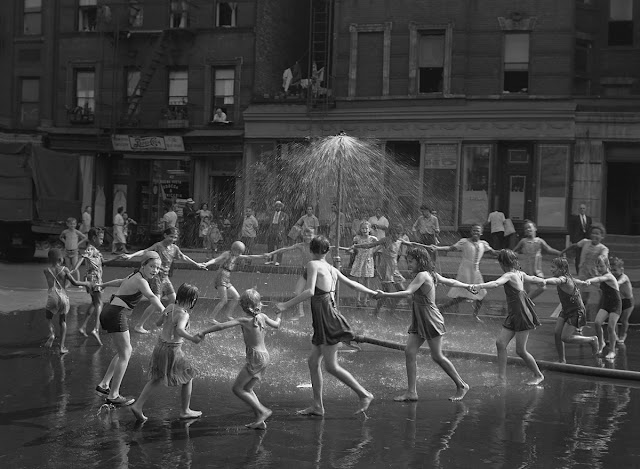 Further reflection makes me think that, if the dancing picture was posed, it was probably the children themselves who decided to form a circle and put on a show for Webb. Yet they don't look like they are "showing-off." Webb lived nearby and the children would have known and trusted him. This photo, as a result doesn't look "staged" in a contrived, artificial way. They are kids being kids, though they know an adult is watching.

Webb's greatest photo, however, was staged in a very deliberate and calculated way. This was Sixth Avenue between 43rd and 44th Street. Webb took eight separate pictures,  documenting an entire city block. He had to ensure that he photographed an entire car or let traffic pass and then take the picture. The eight separate frames were developed into a single image.

This spectacular photo is too big to present in a blog like Art Eyewitness.A similar one frame picture of Sixth Ave does give an idea of the panoramic, eight frame version. The effort that went into creating these life-pulsing images of modern day city life was extraordinary - and so is the effect of looking at it. 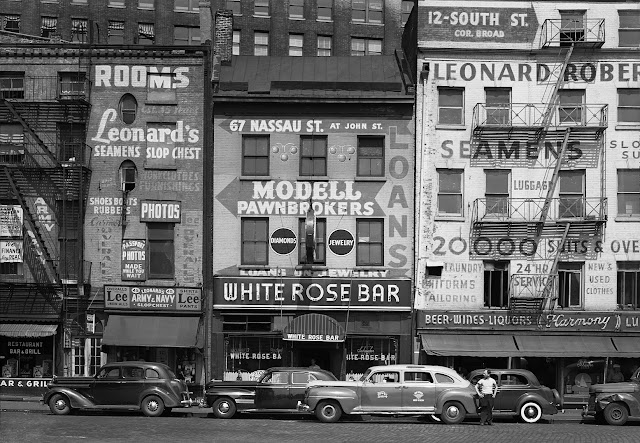 Despite the brilliance of the Sixth Ave photos, Webb came closest to perfection with the close-ups he took of roast peanut sellers, harried pedestrians, little boys petting a cat, a cloth-capped Jewish shop owner on Hester Street. Yet, Webb could not resist the gravity-defying impulse of ascending to the observation deck on the Empire State Building on a clear evening in 1946 to capture spectacular images of the city by night.

Here we see New York not as a world unto itself but as an image of the World in microcosm. Look at each of the lights, glimmering and glittering in the New York night. Think of each of those lights as a human life, a human soul destined to live in the City of God! 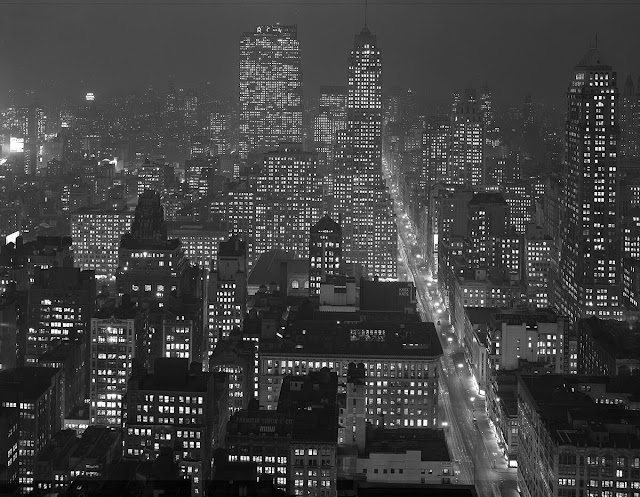 Inspiring thoughts like this often evaporate in the harsh reality of life after sun-up. The real world has little use for enchantment.

Todd Webb's images of the daily, hum-drum humanity of New York City folk in the aftermath of World War II, however, do more than document a passing moment in the Big Apple's history. Webb's photos, splendidly displayed in I See A City, reinforce the conviction that the human spirit shall endure however much the architecture of the City of Man changes.