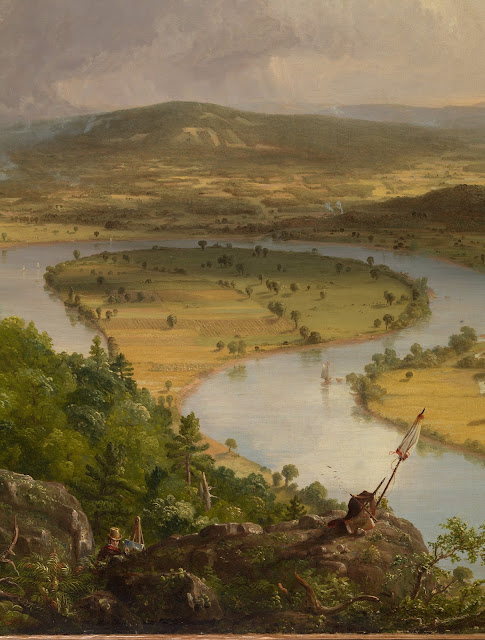 The rise of landscape painting  during the first half of the nineteenth century is a familiar story. Usually told from a French perspective, the standard narrative acknowledges British innovators like J.M.W. Turner and John Constable, before proceeding to the struggle and eventual triumph of Impressionism.

A recently-opened exhibit at the Metropolitan Museum of Art, Thomas Cole's Journey: Atlantic Crossings, studies the embrace of landscape art during the 1800's from a different perspective. Instead of looking toward France, this superb exhibition directs our attention to the developing art scene in the young American Republic.

The key figure in bringing the landscape "school" to the United States was Thomas Cole (1801-1848). Cole was born in Lancashire, just as this region in the north of England experienced the first effects of full-scale industrialization. The volatile economic climate of the Industrial Revolution enriched some families, while devastating others. Cole's family, though well-to-do, was ruined  and sought to regain their fortune in the United States.

When the young Cole reached America in 1817, he had to earn his living and this search for employment took him and his family on a journey around the northern states of the U.S. Cole's artistic ability, already apparent in England, kept surfacing.  Fortunately, he was able to study at the Pennsylvania Academy of Art for a short period and then to make a bid to become a full-fledged artist. 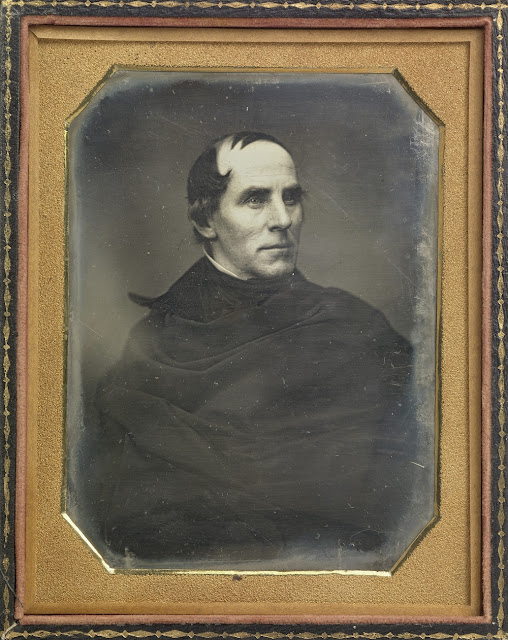 In 1825, Cole exhibited several works in New York City, winning applause from the last of "founding Fathers" of American art, John Trumbull. More to the point, Trumbull purchased one of Cole's paintings - the highest praise one artist can give to another. This stroke of good fortune confirmed that a career in the arts was Cole's destiny.
The key to appreciating Cole's career path is that he focused on landscape painting from the start. Portrait painting was never a consideration. Cole fell in love with the face of American nature, both cultivated areas like the Hudson Valley and the "back country" which had yet to tamed by the pioneer's ax and plow. Surprisingly, no other American artist had made landscape painting their primary oeuvre. The field was open to Cole and he never looked back.

The Metropolitan exhibition displays a number of Cole's early works. His talent was evident from the first, though by European standards these first efforts were competent at best. But this was America and national pride was on the rise, particularly as the U.S. celebrated its fiftieth anniversary in 1826. Americans were proud of their nation and appreciated rising literary talents, with Washington Irving in the lead, who celebrated American themes. 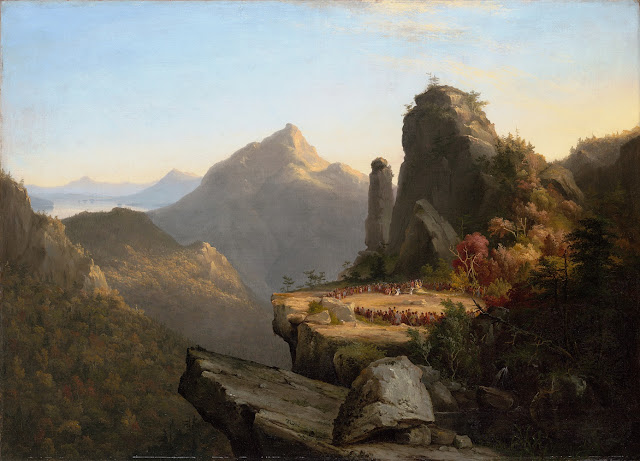 Thomas Cole, Scene from "The Last of the Mohicans,"
Cora Kneeling at the Feet of Tamenund,1827

Cole was quick to capitalize on the rising sense of America heritage. One of his early landscapes refers to James Fenimore Cooper's bestselling novel, Scene from “The Last of the Mohicans,” Cora Kneeling at the Feet of Tamenund, 1827.

Given the diminutive size of the human figures, the action in the painting might just as well be a religious revival or a political rally. It really is the spectacular natural setting that counts. Cole cleverly used the appeal of Cooper's novel to get cultured Americans to take a look at the landscape around them.

Cole's landscapes were highly-esteemed and began to sell. In 1826, Cole along with other American artists and cultural leaders joined ranks to found the National Academy of Design in New York City. Less than a decade after emigrating to the United States, Cole had become one of the leading lights of American art. 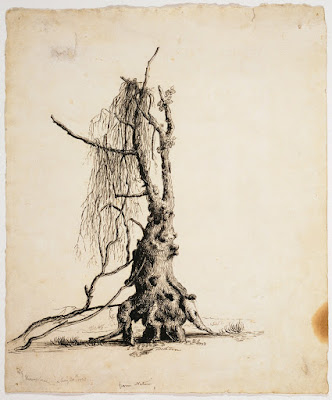 Cole might have chosen a scene from “The Last of the Mohicans” as inspiration but there was a dark, nightmare lurking on the edge of many of his other paintings. In 1823, Cole sketched a withered, gnarled tree, with knotted bark resembling human features. Instead of a Fenimore Cooper novel, this tree would have been better suited to a story by Edgar Allen Poe. 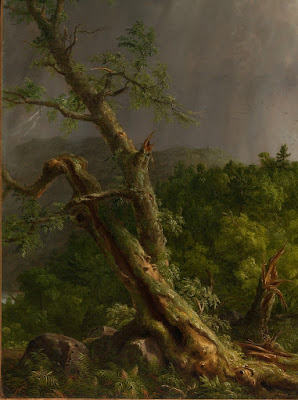 A version of this gaunt, twisted tree would reappear in many of Cole's paintings, most notably in his greatest work, The Oxbow (1836).  Even as he extolled the progress and promise of his adopted country, Cole began to worry that the American Eden might become Paradise Lost.

Lurking fears did not prevent Cole from taking the bold move of travelling to England in 1829, followed by a sojourn in Italy.  At this point in the exhibit timeline, the distinctive nature of Cole's achievement can truly be appreciated. Cole profited enormously from his studies in Europe but he went there as an already successful artist, the essential features of his oeuvre already well defined .

On display are an impressive array of paintings by Turner, Constable, John Martin and other contemporary artists whose works Cole studied. Cole met several of these English masters in person and we can trace influences on his evolving style.

Turner, like Cole, incorporated moral lessons and historical references as the themes of his major paintings. Turner's Snow Storm: Hannibal and His Army Crossing the Alps has a lot more snow than Hannibal and his elephants, but this famous painting certainly conveys Turner's obsessive thoughts on the "fallacies of hope." 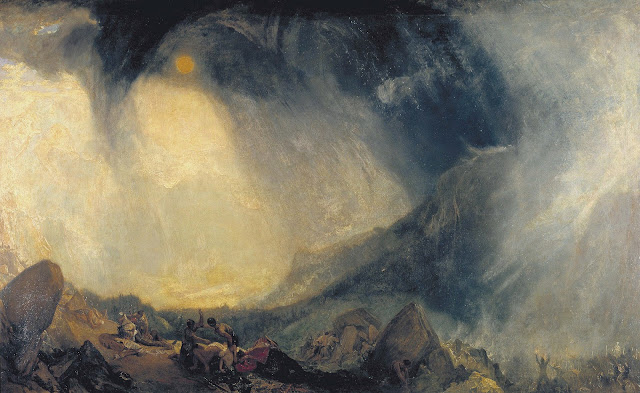 In keeping with Cole's experiences in England, the exhibit on view at the Met will travel to the National Gallery of Art in London during the summer of 2018.

While in England, Cole also studied the great harbor scene by the seventeenth century master, Claude Lorraine, Seaport with the Embarkation of Saint Ursula, 1641. This fabulous painting was one of the original anchors of the collection of the National Gallery, founded in 1824. Claude's masterpiece was a favorite of Turner's. It ranked high on Cole's list too, so high that when he visited Italy, he made a point to rent Claude's old studio. 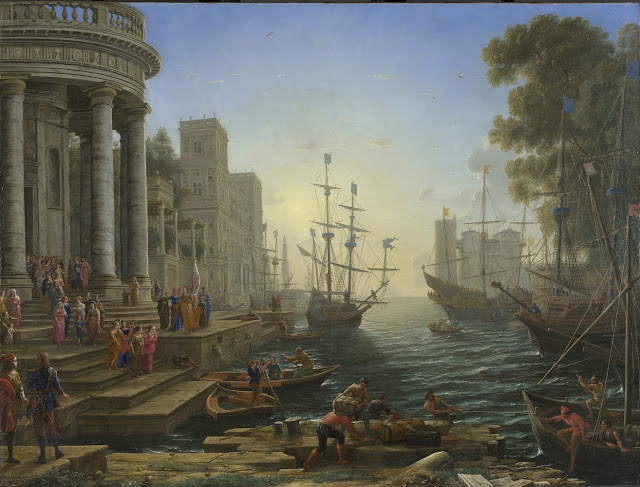 Claude Lorraine, Seaport with the Embarkation of Saint Ursula, 1641

That feeling of self-assurance is significant. But the fact that Cole returned at all from Europe is more telling. The allure of Europe was hard to resist and many of America's greatest artists, Benjamin West, John Singleton Copley and Mather Brown, had traveled to the Old World, never to return. Cole came back. He was truly an American painter upon his return in 1832.

When Cole stepped-off the boat, he found that some of his fears for America were coming true. Industry was starting to replace agriculture, party politics was ramping-up, the  differences between North and South were proving  to be hard-set convictions not passing opinions. In Italy, Cole had seen and painted the ruins of a once-great republic, Rome. Might this be the eventual fate of the United States? 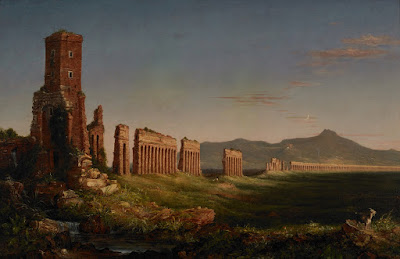 Cole was not the only person who foresaw the future of the U.S. in the sun-bleached debris of ancient Rome. In 1834, a wealthy New York merchant, Lumen Reed, commissioned Cole to create a series of paintings showing the rise and fall of a classical civilization, a mix of fantasy and a close reading of Edward Gibbon's history of Rome's downfall. The resulting series, The Course of Empire, is displayed to spectacular effect in the Metropolitan's exhibit. I have seen The Course of Empire before, but never in such a striking way.

Beginning with The Savage State, in which tribal folk live in huts shaped like American Indian wig-wams, The Course of Empire proceeds to heights of material splendor, followed by destruction and desolation. Each of these brilliantly-realized paintings features a Gibraltar-like mountain peak. This distinctive massif appeared earlier in Scene from “The Last of the Mohicans.” Cole based its shape on sketches he had made of Mount Chocorua in New Hampshire.

While Cole painted this meditation on history, he was a work on his greatest single painting. It is one of the most important works in the collection of the Metropolitan Museum - which says a great deal. Cole gave a Turner-like title to his depiction of a meandering river:  View from Mount Holyoke, Northampton, Massachusetts, after a Thunderstorm—The Oxbow. 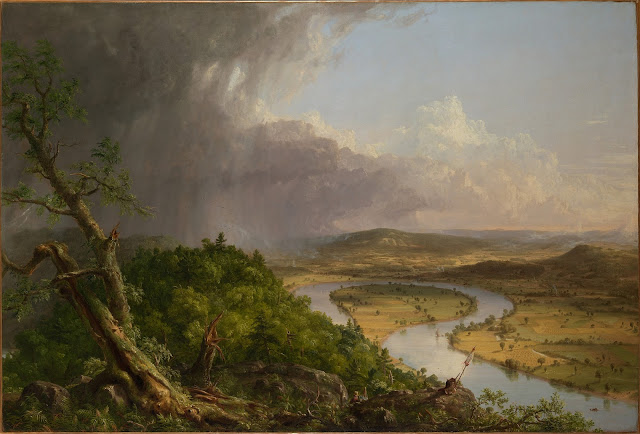 Thomas Cole, View from Mount Holyoke, Northampton, Massachusetts, after a Thunderstorm —The Oxbow,1836

The real subject of this inspiring painting is the retreat of the American frontier before the  advance of ax-wielding pioneers and the farming families who followed in their wake. We can see Cole himself in the detail of the painting which introduces this review. He sits at his easel, a few feet from his umbrella which is planted on the cliff-face like a regimental banner waving over a conquered redoubt. Cole shows himself painting the beginning of the end of the "savage state" which inwardly he found hard to relinquish.

According to meticulous research of The Oxbow, Cole also used the actual setting of this painting for The Course of Empire paintings. Cole made an oil study of the river valley, which he used to plot the location of the magnificent temples, monuments and piers. 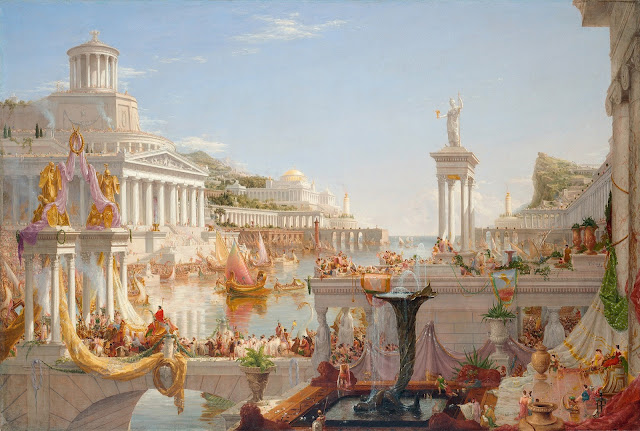 Whenever - or wherever - Cole and his patron, Lumen Reed, conceived the idea for their "rise and fall" series, contemporary events likely supplied some vivid details. On December 16, 1835, a fire from a warehouse in lower Manhattan, ignited an inferno that torched seventeen city blocks, including most of the financial district, of the city of New York. Remarkably only two people were killed but the conflagration may well have informed Cole's apocalyptic vision in The Course of Empire - Destruction. 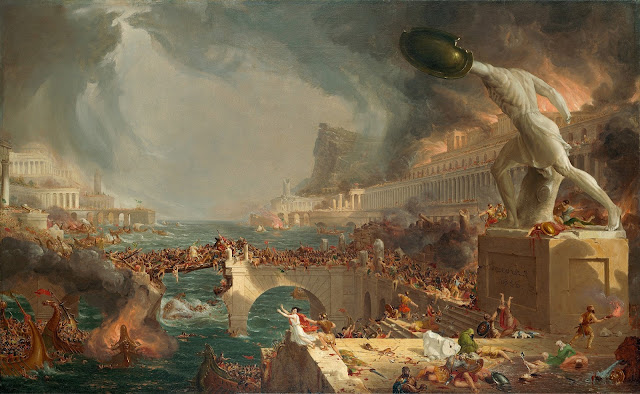 Sadly, Lumen Reed died in 1836 just as the paintings were being prepared for display. The Course of Empire was so well received that Cole painted a second landscape series, The River of Life. He was in the process of painting a third series when he died, suddenly, of pleurisy in 1848. He was only 47 years old and at the height of his powers.

Cole's sudden death was a heavy blow to American culture. Fortunately, Cole had begun training talented pupils like Frederic Edwin Church, whose works would take American painting to sublime heights. Furthermore, Cole's great friend, Asher B. Durand, picked up the  reigns of leadership and guided the Hudson River movement during its time as America's major school of art, the years just before and after the Civil War.

The moralizing content of Thomas Cole's paintings is out of favor today. Likewise, Durand's beautiful tribute to Cole, Kindred Spirits, seems impossibly remote from our experience of life in the over-urbanized twenty-first century. 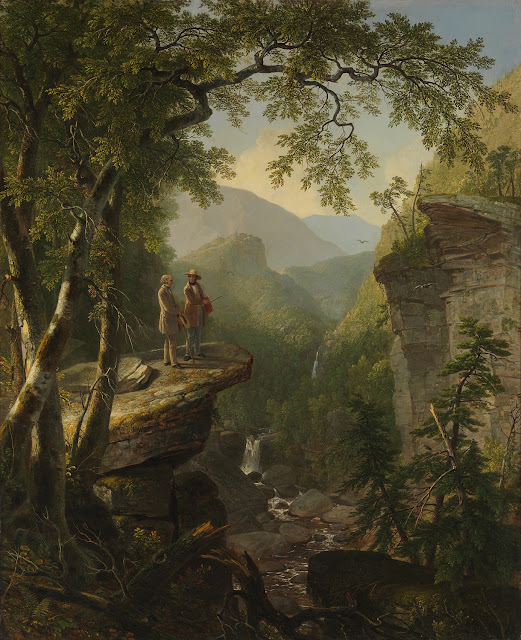 Yet, when we leave the Metropolitan Museum in New York City, we have only to look a short distance to see the welcoming "wilderness" of Central Park. From the rear entrance of the Philadelphia Museum of Art, a "river of life" view greets our eyes, in this case Fairmount Park and the Schuylkill River. Most American art museums are built adjacent to green spaces. And then, there is the National Park System, which preserves a wide swathe of the natural world for the enjoyment and inspiration of all U.S. citizens

None of these wondrous things  - art museums, urban green spaces and National Parks  - might ever have taken root in the United States except for the art-inspired journeys that Thomas Cole made across the Atlantic and his exploration into the soul of America.

Detail of View from Mount Holyoke, Northampton, Massachusetts, after a Thunderstorm — The Oxbow, 1836, by Thomas Cole (American, 1801-1848)

Posted by Art Eyewitness at 7:37 PM