Golden Kingdoms: Luxury and Legacy in the Ancient Americas at the Metropolitan Museum of Art 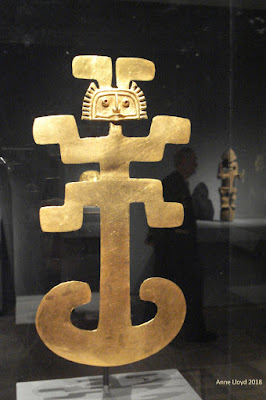 Luxury and Legacy in the Ancient Americas

It is a very rare occasion when an art lover can relive the experience of a great exhibition of the past. We can make such a journey, thanks to the Metropolitan Museum of Art's new exhibit, Golden Kingdoms: Luxury and Legacy in the Ancient Americas.

Albrecht Dürer visited the townhall of Brussels on August 27, 1520. There he saw the spectacular treasures sent from Mexico by Hernan Cortes to the Holy Roman Emperor, Charles V.

None of the incredible array of art works from the Aztec, Maya, Inca and other native American cultures at the Met actually appeared in Brussels nearly 500 years ago. But the emotional impact which these dazzling objects makes surely approximates what Dürer felt as he beheld the glittering jewelry and "idols" seized by the Spanish conquistadores:

I saw the things which have been brought to the King from the new land of gold, a sun all of gold a whole fathom broad, and a moon all of silver of the same size, also two rooms full of armor of the people there, and all manner of wondrous weapons of theirs, harness and darts, very strange clothing, beds, and all kinds of wonderful objects of human use...  All the days of my life I have seen nothing that rejoiced my heart so much as these things, for I saw amongst them wonderful works of art, and I marveled at the subtle Ingenia of men in foreign lands. Indeed I cannot express all that I thought there.

Walking through the galleries of Golden Kingdoms produces the same sensations.This vast exhibit displays over 300 works of art of astonishing beauty and craftsmanship. There is enough here for three or four exhibitions and plenty of food for thought! 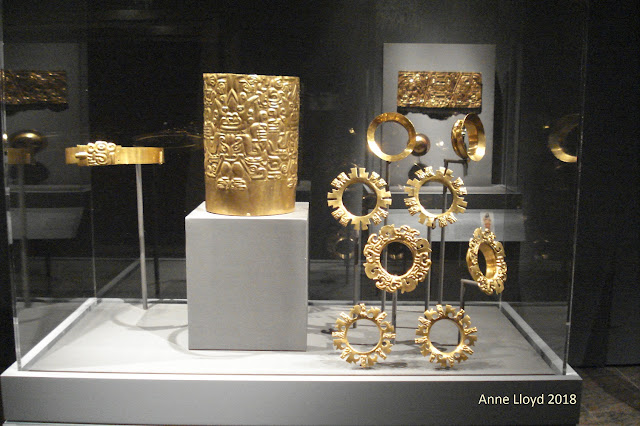 Golden Kingdoms was organized and presented by the Getty Museum in Los Angeles, before coming to the Met. It is the most comprehensive examination of the art produced by the network of cultures that together constituted the civilization of the Americas before the arrival of Columbus and Cortes in the early sixteenth century.

As the title suggests, the emphasis is placed on works of cast gold ornaments and votive objects. This decision is sure to produce a lot of "bling" for the exhibit, no small consideration in trying to entice big crowds to art museums these days.

The Metropolitan exhibition of pre-Columbian art works is equally significant for the attention given to art works which were not created from precious metals.The native American peoples actually rated gold and silver as less valuable than jade and bird feathers. After glimpsing the few remaining  examples of featherwork, like the sleeveless garment or tabard decorated with feathers, made in Peru at some point between 500 to 750 AD, it is much easier to appreciate the regard for such works of art. 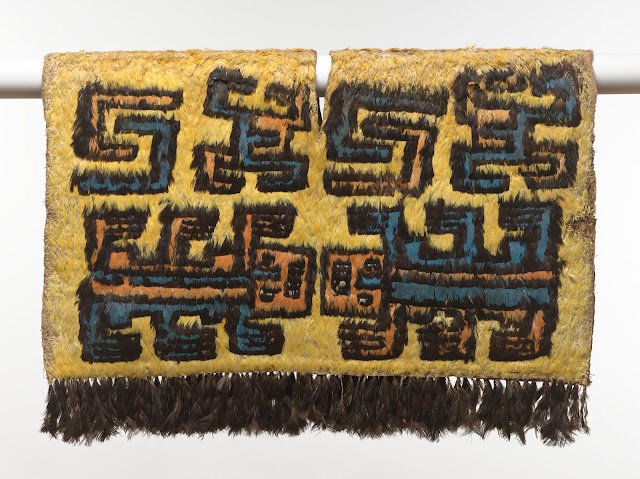 The same pattern of creative achievement by earlier, less-well-known, groups is apparent in Mexico, Central America and the north coast of South America, today's nation of Columbia. The spectacular eagle-shaped pendents worn by the Chiriqui people of Costa Rica were observed by Columbus on his fourth voyage of 1502. Suspended by a cord around the neck, these pendents reminded Columbus of Christian religious medals, as "an Agnus Dei or other relic." 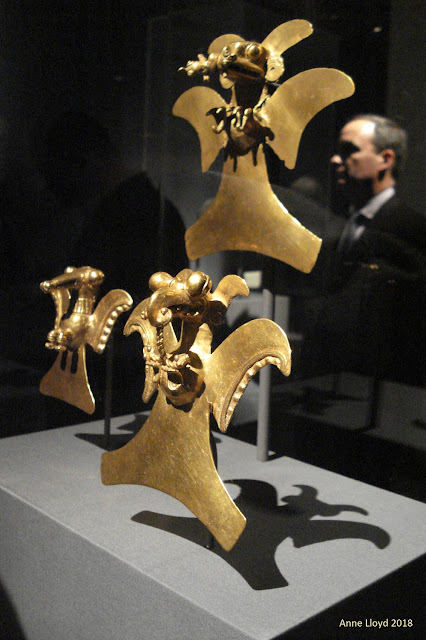 Today, we marvel at the artistry of these works, but the Spanish conquistadors who came after Columbus valued them for their gold content. Whether crafted from gold, jade or other precious materials, the art works on display at the Metropolitan are testaments to a New World civilization that owed nothing to the influences or example of the Old - until after the conquests of the 1500's.

Certainly, there were contacts and shared technologies between the native American cultures before Columbus. According to the exhibit curators, the innovations for working with gold began in Peru and gradually spread northward. But what is really remarkable about the works on display in Golden Kingdoms is the extreme level of artistic accomplishment among all these cultures, from very early dates. The skillful, unnamed artists could only have had limited interaction.

Comparison of two exceptional works of art are instructive in this regard: a golden octopus-shaped frontlet made by a Moche artist in Peru and a jade mask from the Olmec realm near the present-day city of Veracruz, Mexico.

The Moche, like the ancient Greeks, lived in a network of small independent communities. Based on the northern coast of Peru, facing the Pacific Ocean, the Moche are most famous today for creating ceramic portrait heads, which we will examine later. The Moche mastery of goldsmithing was every bit as sensational. A sheet of beaten gold was cut into the shape of an extraordinary mythological being, a menacing octopus-like beast with clawed feet and catfish heads on the tips of its tentacles.

This frontlet, was designed to be affixed to a headdress, no doubt sporting eagle or condor feathers. The mythological beast it depicts is a composite being. No octopus has a human skull-shaped head with reptile fangs, and of course the Moche artists knew that. 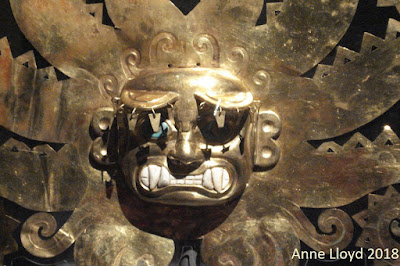 Rather, this extraordinary creation projects fearsome attributes that were intended to be emblematic of the power of a Moche leader or warrior. Moche culture was notable for astonishing creativity - and for internicine warfare.

Two thousand miles to the north of Peru, the Olmecs created the foundational culture of Mesoamerica, where the later Toltec, Maya and Aztec empires were to rise. The Olmecs flourished in the tropical coastal region bordering the Gulf of Mexico from 1200 to 400 BC. Their downfall, about which we know little, preceded the rise of the Moche in Peru by six hundred years.

If the Olmecs had any influence on the native American cultures of Peru, it could only have been indirect. Olmec carvings were collected by the Aztecs and others, much as Greek and Roman statues were sought after by the nobility of Europe during the Renaissance.

The Olmecs perfected sculpting in jadeite and this gray-green stone was viewed as immensely valuable in Mesoamerica until the arrival of the Spaniards in 1519. This striking mask was created between 900 to 400 B.C., the same period as the flowering of Greek art. 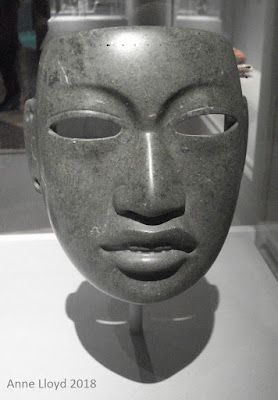 The mask is noteworthy for the incredible degree of skill in carving out the jadeite core to make the mask lightweight and thereby wearable. Notable too, is the simplicity, the almost abstract quality of the face, so appealing to modern sensibilities.

This mask likely represented an ancestor spirit. It has several small holes drilled near the top rim for a headdress to be attached, and holes in the ears for dangling ornaments. The Olmecs worshiped a maize god, in keeping with the vital role of the crop which fed the people of Mesoamerica for thousands of years. Perhaps, the mask was worn by a priest leading the people in religious devotions.

Golden Kingdoms provides a wealth of outstanding art to enjoy. I was particularly impressed with the reclining figure from the Mayan pilgrimage site of Chac Mool in the Yucatan Peninsula. Chac Mool was considered to be a portal to heaven because there was a pool of water on the site held to be sacred. Pilgrims brought offerings to Chac Mool, placing some on the tray held by this celestial being. 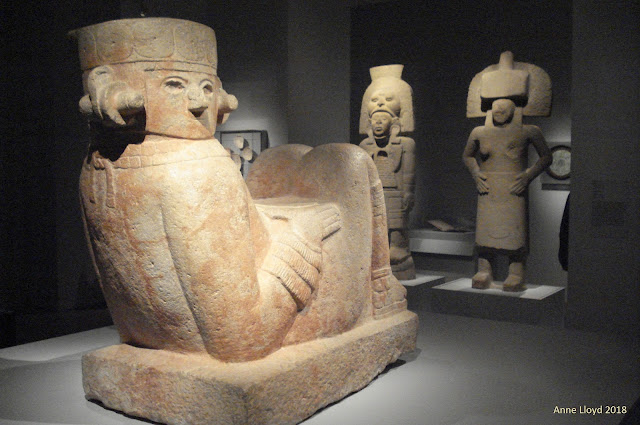 The great British sculptor, Henry Moore (1898-1986) was intrigued with Mesoamerican statues, especially Chac Mool figures of this type. The influence on Moore's work is obvious, even when looking at illustrations in art books. But when you come face-to-face with the real thing, the impact is tremendous.

Many of the objects on view in Golden Kingdoms are much smaller and less imposing than the Chac Mool statue. Exquisite golden pendants, ear rings and other items or personal adornment feature prominently in the exhibit. These were coveted items by Cortes and the Conquistadores, who melted them down into bullion. 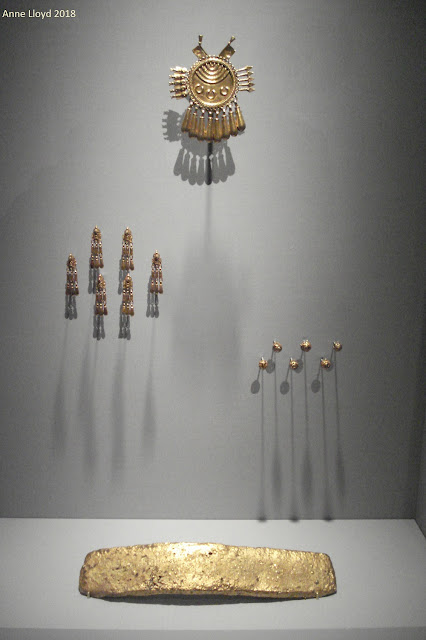 Not all of this looted gold made it to Spain. One of the concluding galleries of Golden Kingdoms shows what happened to many treasures not on view. A bar of gold, excavated in Mexico City, was almost certainly made of Aztec gold, smelted by the Spanish and then  lost on the Noche Triste, the "Night of Sorrows."

On June 30,1520, Cortes and his men tried to escape from the Aztec capital under the cover of night. Laden with gold bullion and weighed down by their armor, many of the Spaniards were killed. Wounded in the fighting or disoriented in the darkness, they plunged to their deaths from the causeway into the lake surrounding Tenochtitlan.

The native American peoples were no strangers to war, even before the arrival of Cortes and his Conquistadores. 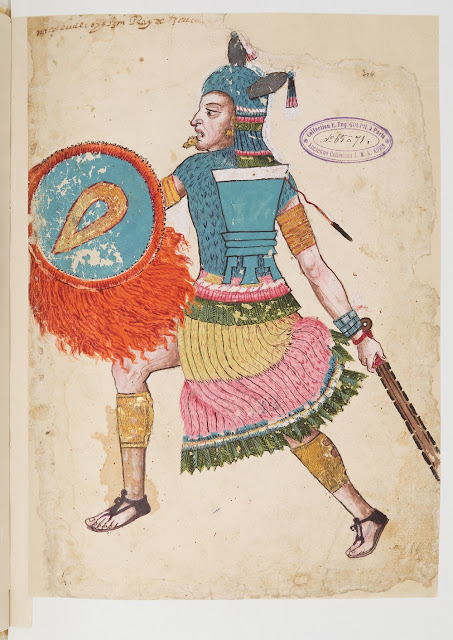 Just as the early native American cultures, the Olmecs and the Moche, set the tone of artistic achievement, so the manner and objectives of warfare were established at a distant time.The capture of enemies, who would then be sacrificed to appease the gods, became the principle goal of war among the peoples of Mexico and Peru.

By an amazing stroke of luck, we can put a human face to this unpleasant aspect of life - and death - in the ancient Americas. A ceramic portrait vessel was discovered, showing a Moche warrior, whom archaeologists call "Black Stripe." Dated to ca. 550 A.D., this is a masterpiece of the first rank. In terms of physiological depiction and psychological insight, the ancient Greeks could not have done better in marble or bronze. 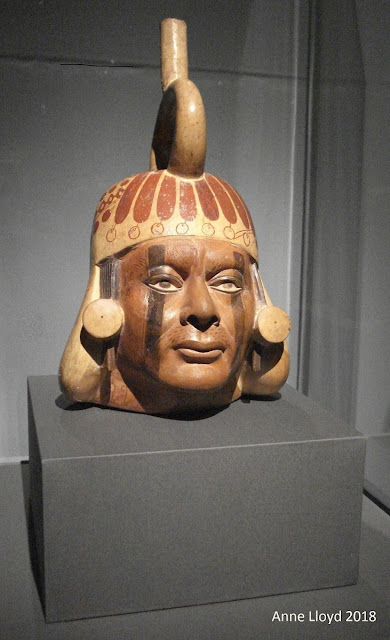 This magnificent portrait shows Black Stripe in his prime, a victorious combatant in many a duel. It reminds me of nineteenth century photographs of the warrior chiefs of the Great Plains who fought the U.S. Cavalry, Red Cloud of the Lakota Sioux and Quanah Parker of the Comanches. Here is the face of battle: bravery, cunning, toughness and cruelty.

There is however, another portrait of Black Stripe, which is not shown in the Golden Kingdoms exhibit. It appears in the Thames and Hudson book, What Makes a Masterpiece (2010). In this later portrait, Black Stripe is a captive, stripped of his regalia and no longer wearing his signature war paint. He is waiting to be sacrificed.

Historians have still to figure out why the Moche would go to such great lengths to create unforgettable portraits on ceramic vessels with stirrup-like handles. It is a mystery and will probably ever remain so. 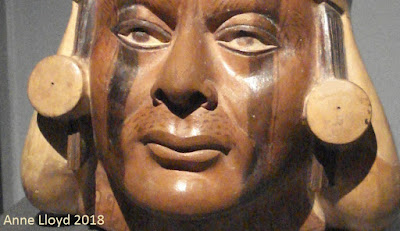 However, in a delicious piece of irony, Moche ceramics were collected by Paul Gauguin's mother, Alina, while they lived in Peru during his childhood. It is amazing to think that these were the first art works that Gauguin studied. The artist who later rejected many of the canons of Western art, in order to embrace the "savage," spent time as a boy looking at examples of Moche art similar to the portrait of Black Stripe!

Moche art and other superlative examples of native American creativity are now displayed in the Golden Kingdoms exhibit at the Metropolitan Museum of Art. There's no telling what impact these things "from the new land of gold" may have on a future Albrecht Dürer, Paul Gauguin or Henry Moore.

Photos courtesy of Anne Lloyd and the Metropolitan Museum of Art

Posted by Art Eyewitness at 7:29 PM