A Chronology of Art, A Timeline of Western Culture from Prehistory to the Present 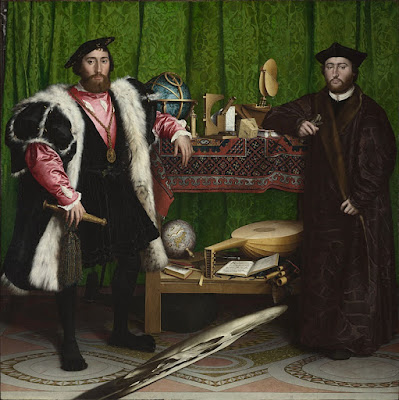 A Chronology of Art

A Timeline of Western Culture from Prehistory to the Present

A Chronology of Art, recently published by Thames & Hudson, explores how events shape art - and vice versa. The book skillfully juxtaposes an extended timeline of key dates in history with discussion of the great works of art which were created while these events unfolded.

1533 is a case in point. It was a  year filled with momentous events. The Spanish conquest of Peru reached a bloody climax with the judicial murder of the ruler of the Incas, Atahualpa. A world away, the  "King's Great Matter" shattered England as Henry VIII broke with the Papacy over his marriage to Catherine of Aragon. Henry then married Anne Boleyn and was excommunicated by Pope Clement VII.

That same year, two French diplomats in England, Jean de Dinteville and Georges de Selve, decided to have their portraits painted. They commissioned Henry's court painter, the Swiss-born Hans Holbein, to portray them together. De Dinteville and de Selve posed with symbolic artifacts such as a celestial globe and a terrestrial globe, a lute with a broken string, a hidden crucifix and a huge skull, tilted at a baffling angle. 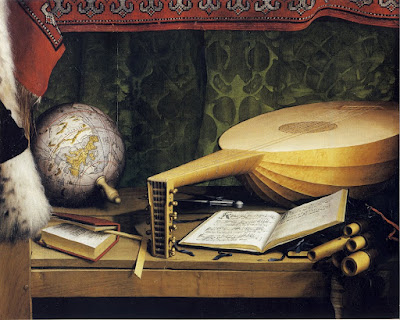 The resulting work, now in the collection of the National Gallery in London, is the enigmatic painting entitled The Ambassadors. For all of their political skill and elegance, Holbein's diplomats confront a political reality characterized by the broken string of the lute and a globe of the earth, turned upside down. These testify to the shattered unity of Christendom.
Art and politics seldom connect so neatly as happened with The Ambassadors. Yet, there is almost always some shared idea or influential factor linking the world of art and affairs of state. 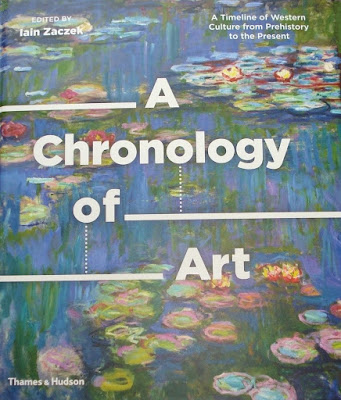 A Chronology of Art is likely to become an essential reference work for art students. The book cogently documents the development of art in the West, while highlighting the progression of political and religious events. Although the civilizations of antiquity and the Middle Ages are surveyed, the art and events of recent times are given the fullest coverage.

A disturbing pattern emerges as you proceed with A Chronology of Art. The "best" art often emerges from the "worst" of times.

The years, 1480 to 1500, are a good example. The Spanish Inquisition was launched during these two decades. The English "Princes in the Tower" were murdered during the Wars of the Roses. Columbus made his epic voyages of discovery, increasingly viewed in some circles as acts of genocide. 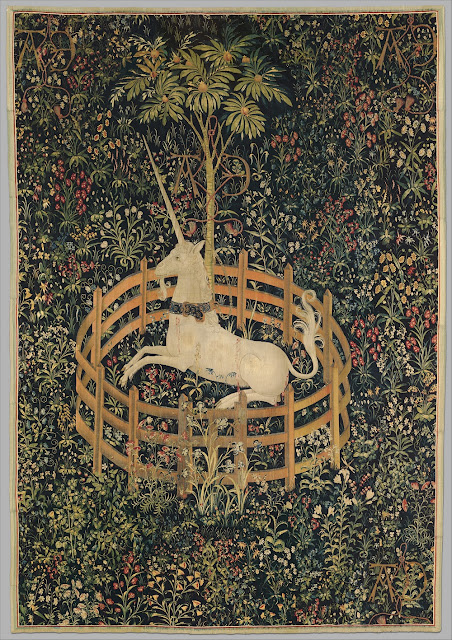 The Unicorn in Captivity tapestry (c.1495)

By contrast, the art of the period includes many works of singular beauty, including Botticelli's The Birth of Venus (c.1485) and The Unicorn in Captivity tapestry (c.1495).
I was especially moved by The Glorification of the Virgin (c.1490) by the little known Flemish painter, Geertgen tot Sint Jans.

In theological terms, Geertgen shows the victory of good over evil proclaimed by the Book of Revelations. Yet we scarcely notice this cosmic interpretation. This is partly due to the fact that The Glorification of the Virgin was one half of a diptych. The other panel, now separated, shows the crucifixion of Jesus. The real reason, at least for a modern art lover, is that this incredible work appeals to our heart rather than our beliefs. 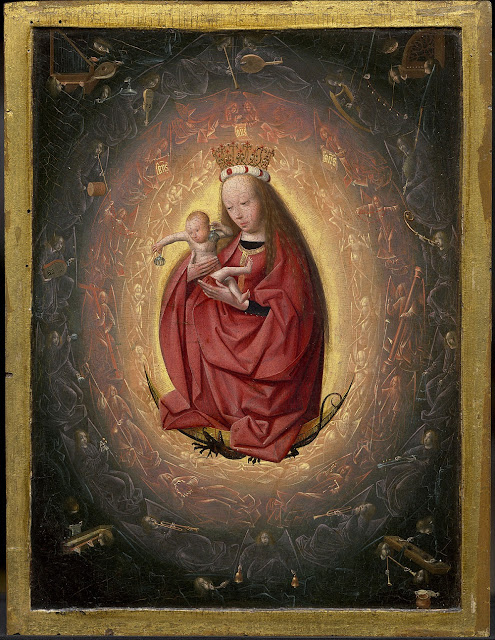 Geertgen tot Sint Jans, The Glorification of the Virgin, c.1490

What we focus upon in The Glorification of the Virgin is a full symphony of the heavenly choirs. Angels play every conceivable musical instrument: lutes, trumpets, violins, a pipe organ powered by a bellows. They are making "a joyful noise unto the Lord" and the Christ Child joins in, tinkling away with a little bell.


The "march of time" chronology pauses every few pages for a thematic essay focusing on a subject of note -  Celtic metalwork, the discovery in 1939 of the incredible Sutton Hoo ship burial with its trove of early Anglo Saxon treasures, the invention of oil painting during the early Renaissance and many more topics - brilliantly complementing the unfolding timeline.

One of the most enjoyable of these essays traces the imagery of power in one of its most potent forms, the Equestrian Portrait. We follow the trend of depicting the "man on horseback" across art history. Anthony van Dyck's 1633 portrait of Charles I, mounted on a magnificent war horse, is paired with Jacques-Louis David's Napoleon Crossing the Alps (1801). (Napoleon actually rode a mule over the Alps as shown in an 1850 painting by Paul Delaroche). As both rulers were short of stature, their noble steeds gave them the advantage of height. 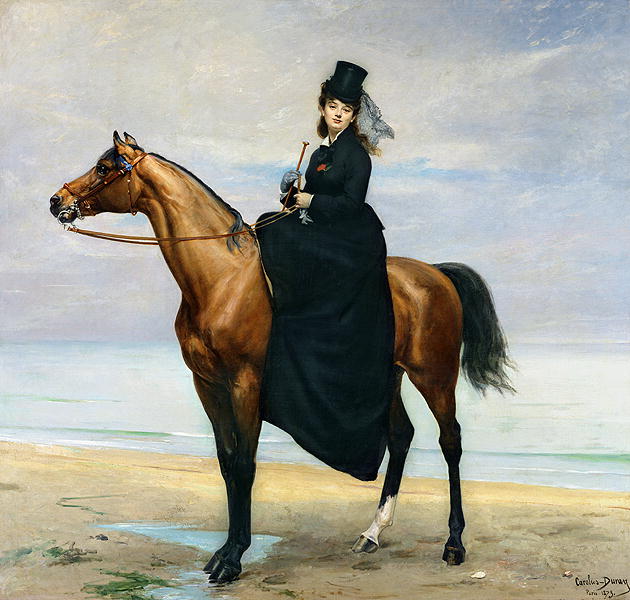 Carolus-Duran, Mademoiselle Croizette on Horseback, 1873
By contrast, Mademoiselle Croizette looks far more commanding - and certainly more dashing - in Carolus-Duran's 1873 portrait of her riding on the beach of Trouville. What a fabulous work of art, horse and horsewoman at ease in the enjoyment of life and vitality! Napoleon Bonaparte, the "Man of Destiny," never looked half so imposing on his steed as Sophie Croizette, riding sidesaddle on a summer's day.
Napoleon also figures significantly in the pages devoted to the years, 1800-1810. Two works of art display the French emperor in all his vanity and arrogance. In an intriguing comparison, William Blake's The Great Red Dragon and the Woman Clothed in the Sun also is highlighted.
The "heroic" nude stature of Napoleon as Mars the Peacemaker took flattery to an absurd level. Antonio Canova commenced work on the statue in 1802, during the brief Peace of Amiens with Great Britain. 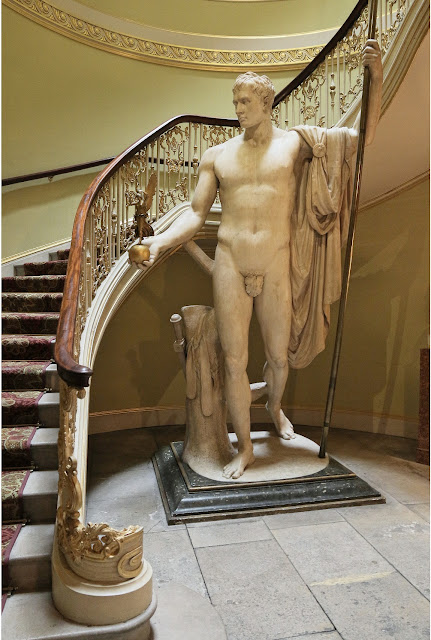 Mars, of course, was no peacemaker and neither was Napoleon. In less than a year, Napoleon was back on his career of conquest. He was addicted to war, but after a few moments of reckless glory as a young commander, he seldom exposed himself to danger on the battlefield.
A "god of war" Napoleon may have been, but he tried to convince his subjects that he was a noble, humane ruler as well. The second work depicting him in the 1800 to 1810 section is Napoléon on the Battlefield of Eylau. Painted by Antoine-Jean Gros, shortly after the battle, this is one of the rare works in the history of art to show accurate depictions of battlefield casualties. 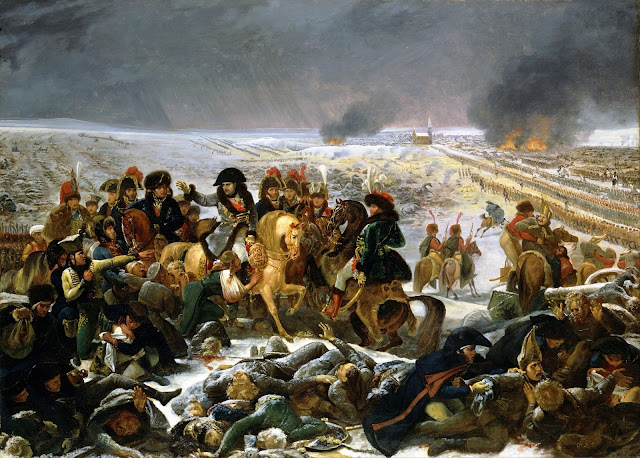 Antoine-Jean Gros, Napoléon on the Battlefield of Eylau, 1807

This surprising willingness to acknowledge the horrors of war was actually a sophisticated propaganda venture on Napoleon's part. The Battle of Eylau, fought during a blinding snowstorm in February 1807, was not a French victory. Everyone knew that Napoleon had come close to defeat, saved only by a massed cavalry charge which broke through the Russian lines, enabling Napoleon to hold out until reinforcements arrived. So many French troops fell in the battle (perhaps 25,000), that the exact number was never computed, or at least not published in the reports sent back to France.
Antoine-Jean Gros, acting on Napoleon's directive, turned the frozen hell of Eylau into a moral victory. Napoleon is shown, haggard and distraught, directing care for French and Russian wounded alike. It was a clever ploy and convinced many that Napoleon was a wise and compassionate leader. More to the point, it did not stop Napoleon from going to war against Russia in 1812 where this dreadful scene was repeated on a vaster scale.
At the same time as Napoleon was pursuing his "destiny," William Blake was attempting to "see a world in a grain of sand and heaven in a wild flower, hold infinity in the palm of your hand and eternity in an hour." 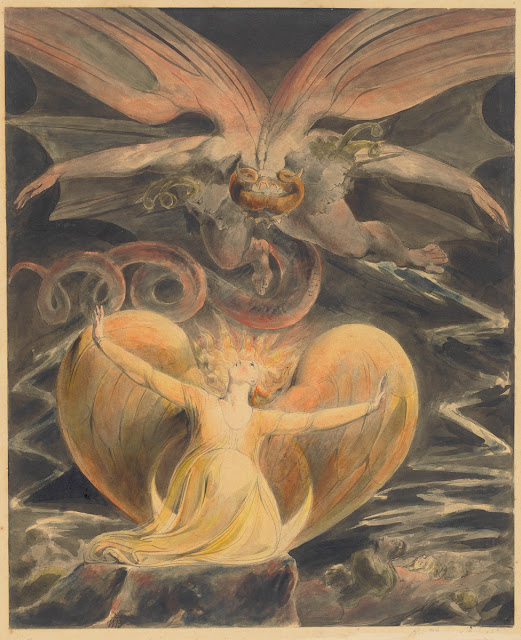 William Blake, The Great Red Dragon and the Woman Clothed with the Sun, c. 1805
Apart from a small band of admirers, many people thought the visionary Blake to be utterly insane. Others considered him a prophet. Blake's wife was perhaps closest to the truth when she noted that "I have very little of Mr. Blake's company. He is always in paradise."

Blake may have inhabited his own spiritual realm. But that did not mean that he was cut-off from the world around him or oblivious of the human cost of Napoleon's bid for glory. When you reflect on the scene of carnage at Eylau, you realize that Blake's attempt to visualize the struggle of good versus evil in biblical terms reflected the dark era that he shared with Napoleon. 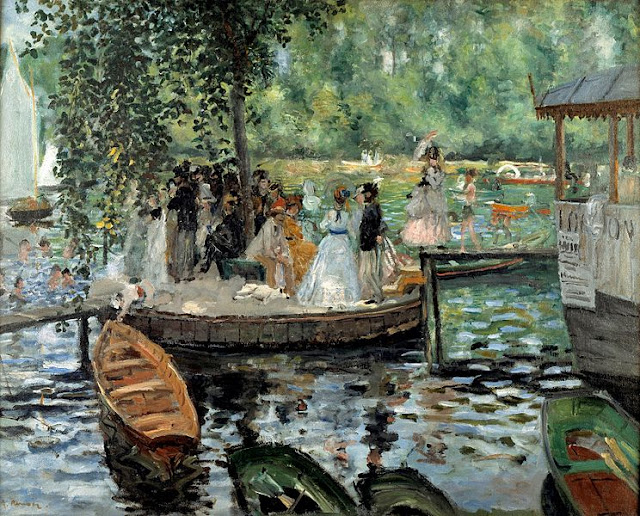 Pierre-Auguste Renoir, La Grenouillère, 1869
These reflections should not cast a shadow on the human genius for transcending history through art. That is certainly true for Blake. It was true, as well, for Pierre-Auguste Renoir and Claude Monet, when they painted decent, ordinary people relaxing at the "frog's pond," La Grenouillère, as war clouds gathered over France in 1869.

Today, only historians can explain the reasons for the Franco-Prussian War of 1870-71. But the "dueling" paintings of Monet and Renoir at La Grenouillère, the founding works of Impressionism, are cherished all over the world.
You don't have to study the historical background of great works of art like the La Grenouillère paintings in order to appreciate them. However, by establishing the context for the art works we love so much, A Chronology of Art reminds us that human beings, beset by "wars and rumors or wars," can rise to the challenges of life and create enduring masterpieces.
This is a lesson of great relevance to the troubled times we live in and, if we are lucky, this lesson will apply to the timeline of the future.