Cézanne Portraits at the National Gallery of Art, Washington D.C, 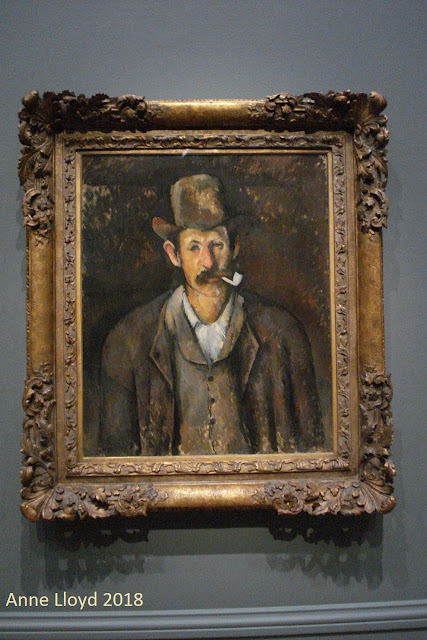 Cézanne Portraits, the new exhibition at the National Gallery of Art in Washington D.C., places Paul Cézanne in the unaccustomed role as a master portraitist.

Yes, Cezanne was the "father" of Modernism. Yes, too, he really was an obsessive investigator of a limited number of motifs. Over and over again, Cézanne painted Mont Sainte-Victoire, pipe-smoking card players, table top still-lifes. But a supremely accomplished portrait painter? Cézanne?

Perhaps, the reason for our surprise at the degree of Cézanne's devotion to the human face is the lack of attention which art scholarship has paid to his portrait painting.

The tremendous display at the National Gallery makes good the earlier omission. Sixty-plus works of art are being shown in the first exhibit since 1910 to be exclusively devoted to Cézanne's portraits. In that long-ago year, Cézanne's dealer, Ambroise Vollard, presented twenty-four portraits in his small Paris shop.

The National Gallery exhibit is the third and final venue for Cézanne Portraits. The exhibition, previously shown at the Musée d’Orsay, Paris, and the National Portrait Gallery in London, presents the full evolution of Cézanne's portraits. The works on view range from the thickly painted depictions of family members like his father reading a newspaper in 1866 to a minimalist portrait of The Gardener Vallier, painted shortly before Cézanne's death in 1906. 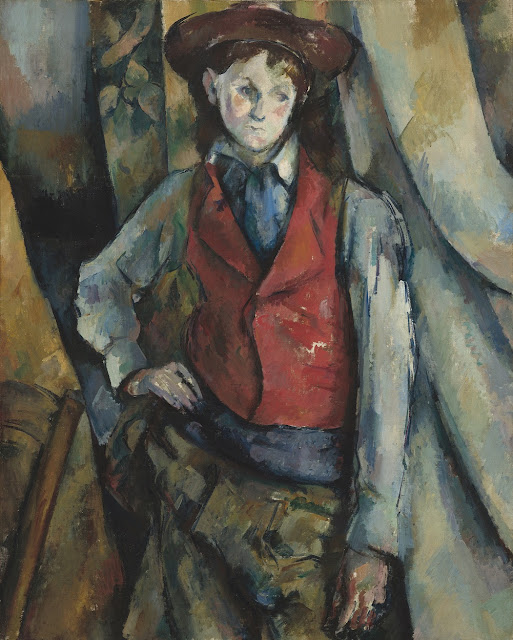 Predictably, Cézanne's Boy in a Red Waistcoat, 1888–1890, gets "top-billing." This is one of the National Gallery's most beloved paintings. New insights on this iconic work are part of the benefits and pleasures of this outstanding exhibit. We can now appreciate Boy in a Red Waistcoat not only as a singular painting but as a milestone in Cézanne's devoted study of the features of humanity.

Cézanne's lifelong interest in portraiture should not come as a surprise. That this was no passing interest or "sideshow" to his landscapes is confirmed by the extraordinary self-portraits which Cézanne painted throughout his career. There are five of these works on view in the National Gallery exhibition. 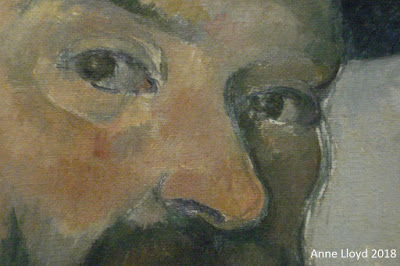 Look into the intense gaze of any one of Cézanne's self-portraits and you will see the focused scrutiny of an artist who did not blink when it came to appraising human beings, beginning with himself.

Cézanne confided to Vollard that “the culmination of all art is the human face.”

Theory aside, Vollard had a more direct experience of Cézanne's manner of portrait painting. Vollard endured one hundred fifteen sessions as the exacting artist attempted to portray his features. Cézanne eventually gave-up on Vollard's portrait, exclaiming that "the front of the shirt isn't bad."

The rest of Vollard's portrait may appear to be unfinished and, certainly by the canons of nineteenth century art, it was. By twentieth century standards, Cézanne's Ambroise Vollard is a masterpiece. It is the first great painting of the twentieth century, though it was created in 1899. 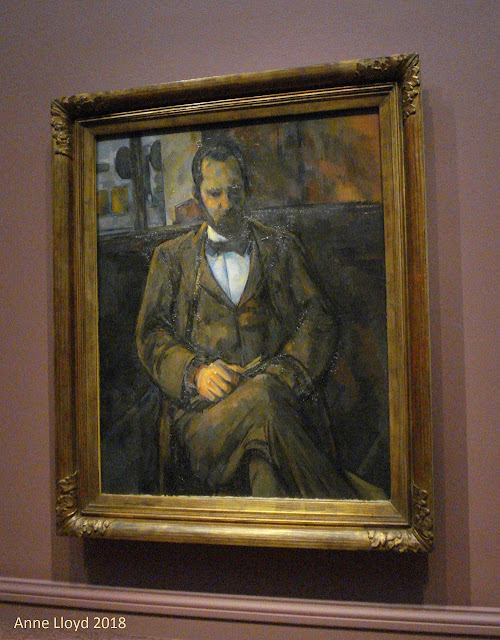 Ambroise Vollard is shown here as a human being whose life is in the process of "becoming" rather than fixed in a state of being. The cells of our bodies,as well as the thoughts in our minds, are always in a state of transformation. That is what we see here, as Vollard comes into focus, only to begin the process of changing to the next, transitory, stage of his life.

Cézanne painted with a sense of change in many of his pictures. Whether it was shadows falling on Mont Sainte-Victoire or the fleeting expressions on the faces of the people Cézanne painted, nothing remained the same. In many ways, the constant cycle of growth and decay tormented Cézanne who cherished tradition in his private life. In other ways, it drove Cézanne to new heights of artistic achievement. 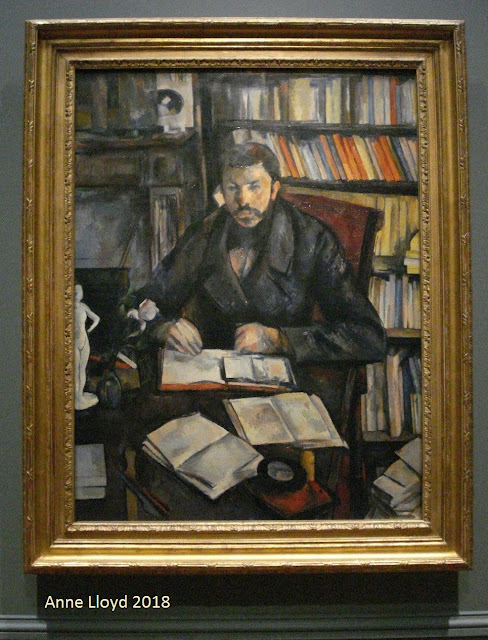 Gustave Geffroy, an influential art critic, praised Cézanne in an 1894 article. The early 1890's was a low point in popular esteem for Cézanne.

As an act of gratitude, Cézanne offered to paint Geffroy's portrait. He nearly pulled it off - even by nineteenth century standards. But, for all his effort, Cézanne could not "set the focus" on Geffroy's face. After much labor, the portrait - to Geffroy's dismay - was abandoned.

Part of the problem may have been Cézanne's emotional discomfort at being back in the Parisian art world which had rejected him during the 1870's. Some accounts also assert that Cézanne and Geffroy did not find much common emotional ground, apart from the critic's sincere praise of Cézanne. There is a deeper, more fundamental, fault line, however, that prevented this otherwise excellent painting from being completed. 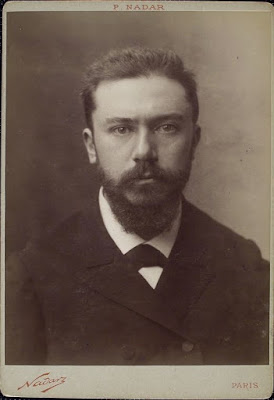 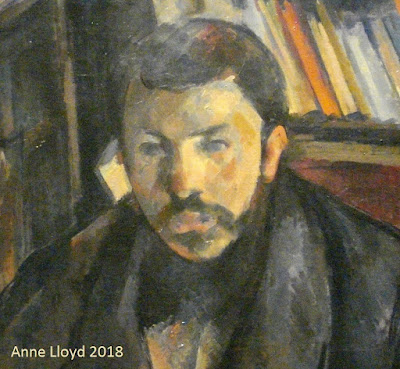 Look closely at the Nadar photo and then at Cézanne's portrait. Uncertainty, evasiveness, tension radiate from Geffroy's expression in Nadar's portrait of him - and from Cézanne's. This is the face of a modern European intellectual, the kind of conflicted individual who would embrace Freud's theories of psychoanalysis.

It is intriguing to speculate on the difference between the unfinished "likeness" of Gustave Geffroy and Cézanne's portraits of unnamed working class people like the formidable
Woman with a Cafetière, 1890–1895, or Man with Pipe, c.1896. These are fully realized portraits because the sitters appealed to Cézanne as "complete" human beings. 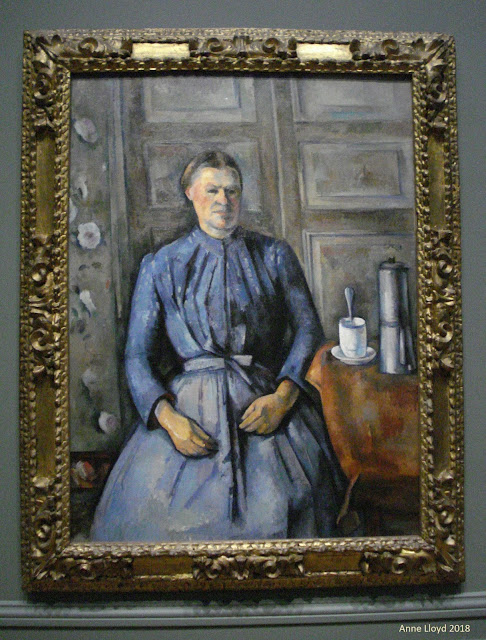 In a constantly changing world, Cézanne valued his neighbors in Aix-en-Provence for the way that they embodied tradition. The portraits he created celebrate the natural qualities of their lives, their strength and fortitude and the raw, pragmatic honesty which they projected to the world. 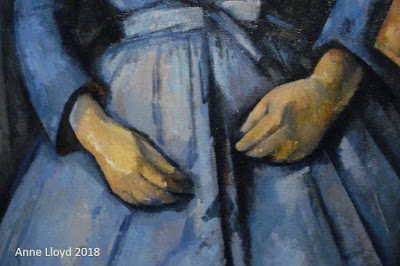 Alex Danchev, Cézanne's greatest modern biographer, quotes a letter to a young admirer which Cézanne wrote late in his life. It is very revealing of his attitude to working-class people which was transferred to the portraits he painted of them. Cézanne wrote:

I live in the town of my boyhood, and I recover the past in the faces of the people of my own age. What I like most of all is the look of the people who have grown old without drastically changing their habits, who obey the rule of time; I deplore the efforts of those who try to insulate themselves from that process.

Cézanne referred to his paintings as "my studies." There is every reason to link his late portraits of the rough hewn locals of Aix-en-Provence with the more than sixty views of Mont Sainte-Victoire which he painted during the last decades of his life. The traditional values of the Provencal folk appealed to Cézanne in the same manner as the enduring mountain which so obsessed him.

Caution, however, should be exercised in ascribing any overarching values to Cézanne's work except his determined effort to continue studying nature through his work. No artist every commented more acerbically about art theory than Cézanne. In a letter to Emil Bernard in 1904, he asserted:

But I always come back to this: the painter should devote himself completely to the study of nature, and try to produce paintings that will be an education. Talking about art is virtually useless. Work that leads to progress in one's own métier is sufficient recompense for not being understood by imbeciles.

If one takes Cézanne at his word, then all of the portraits on view in the National Gallery exhibit make perfect sense. With the ideals of work and the study of nature in mind,  Cézanne's groups of paintings succeed as individual works and as series of related works.

The rough finish of the early paintings of Cézanne's uncle, Dominique Aubert, speak of character. Cézanne had his uncle pose in various costumes and, using a palette knife to apply paint, created what a friend called "a mason's painting."

There is more here than experimentation in depicting the strong features of a native of Provence. Here, "character" alludes to ribald humor, always a feature of country folk. Perhaps, too, there is a note of mockery in the  paintings of Uncle Dominique, decked out in a turban or a monk's robe. Such role playing is likely a sly comment on the moralizing of paintings at the Salon from which Cézanne had been rejected. 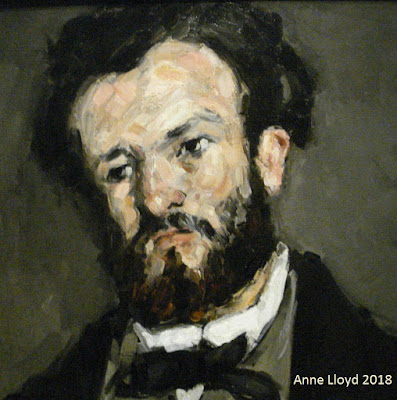 The same "sculpted" finish was applied to the portrait of Cézanne's friend, Antony Valabrègue, painted around between 1869-1871. This is a moving, emotionally charged work.  Valabrègue is shown, very like Gustave Geffroy, as a human being of modern times. There are no props, no setting as in the portrait of Geffroy. Instead, Valabrègue is defined by his own interior attributes - sincerity and dedication, worry and self-doubt. It is the face that many of us see, every morning, in the mirror.

There are several faces that we see repeatedly in the exhibit. Looking down from the gallery walls are five paintings of Uncle Dominique, two of Antony Valabrègue and two of an early, devoted patron named Victor Chocquet. But, apart from the numerous self-portraits, nobody can compete with Hortense Fiquet (1850–1922) in the number of works depicting her in the exhibit.

Hortense Fiquet began posing for Cézanne 1872. Fourteen years later, she became  Madame Cézanne. It should come as no surprise that there are twenty-nine existing portraits of her by Cézanne or that these works play a dominant role in the exhibition.

What is remarkable about these portraits is that Madame Cézanne never ages or seems more self-assured. Even with their marriage, the portraits of Madame Cézanne seldom progressed to a formal, finished state like the Woman with a Cafetière, 1890–1895. The magnificent Madame Cézanne in a Red Armchair, 1877, from the collection of the Museum of Fine Arts, Boston, comes close to a fully-realized portrait, though few people in the 1870's would have accepted it as one. 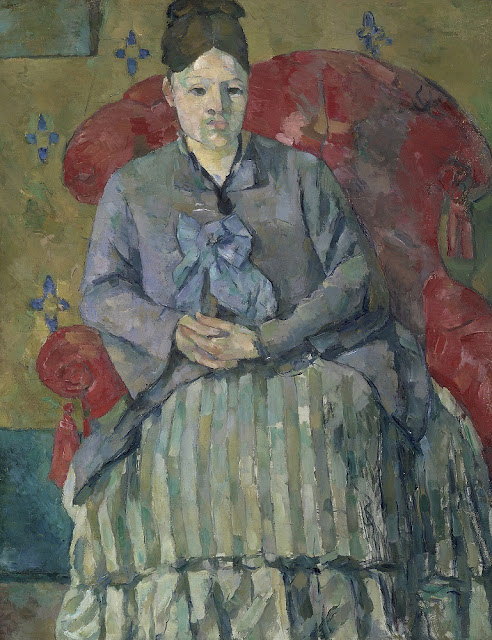 However impressive or inscrutable, these portraits of Madame Cézanne remain "studies." Questions remain about the relationship between Cézanne and his wife. Cézanne's famous quip that his wife cared only for "Switzerland and lemonade" remains unverified. We just don't know much about their emotional bond - or lack of one. 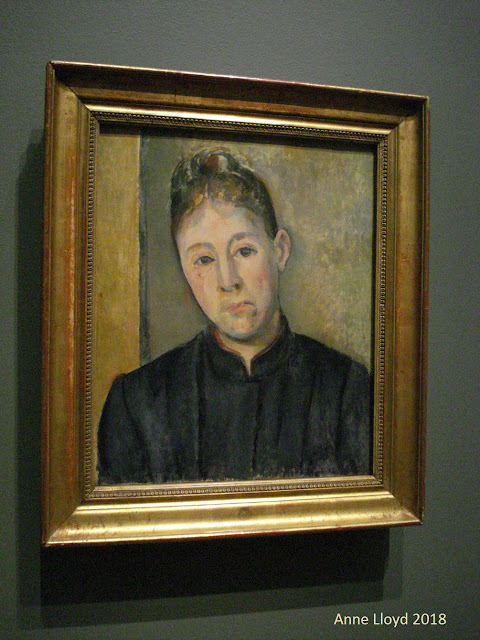 As we examine these portraits of his wife, the most valid point is that these works are not concerned with biographical details. Nor are they emotional statements. Cézanne studied the human face from a number of viewpoints, as he did with his other works, to reach a better understanding of the principals of art.

Ultimately, we have to be satisfied with Cézanne's remark than “the culmination of all art is the human face.”

Cézanne's obsessive exactitude left many portraits incomplete, unrealized. Yet, we are all "works in progress." Despite himself, Cézanne created the template for portraying human beings in the conflicted "Age of Anxiety," otherwise known as the twentieth century. 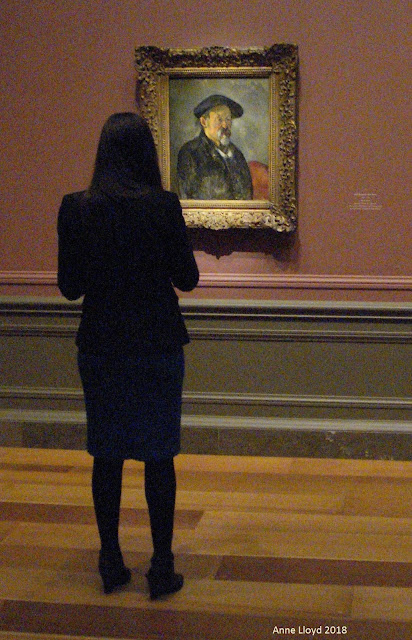 In his last letter to Emil Bernard, Cézanne wrote that “now it seems to me that I’m seeing better and thinking more clearly about the direction of my studies. Will I reach the goal  which I’ve sought so hard and pursued for so long?”

In his own mind, Cézanne is unlikely to have been satisfied with the sum total of his efforts. However, he also wrote to Bernard that "I have vowed to die painting.”

Cézanne Portraits proves, in that respect, that the "father of us all," as Matisse called Cézanne, was as good as his word.

Posted by Art Eyewitness at 7:08 PM