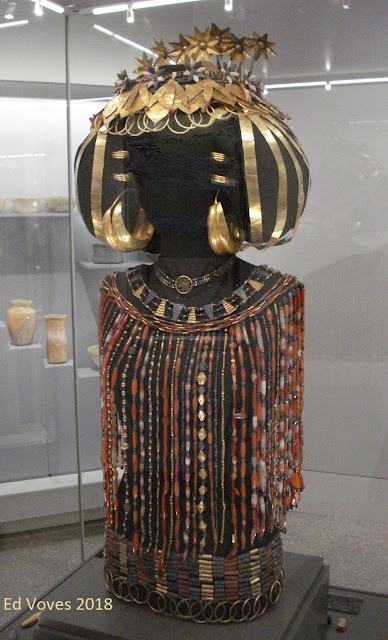 There is no contest about who will be the "Homecoming Queen" for the big celebration at the University of Pennsylvania this year. Her name is Puabi and she may have been a real queen - of the Sumerian city-state of Ur in present-day Iraq.

Puabi lived approximately 4,500 years ago, give or take a century. This makes her a little old to be a "continuing ed" student at Penn and in fact her mortal remains are preserved in the Natural History Museum of London. From close study of her skeleton, it has been determined that Puabi died, aged 40 years, around 2,450 B.C.

Puabi has been "on campus" at Penn by virtue of her fabled crown or headdress which has been the star attraction of the University of Pennsylvania Museum of Archaeology and Anthropology since the 1930's.

The Penn Museum, located in Philadelphia, is re-opening its galleries of ancient art from Mesopotamia and the Middle East after a transforming face-lift. The golden headdress and other regalia of Puabi (who may have been a priestess rather than a queen) have been traveling on a  special exhibition tour during the renovations at the Penn Museum.

I was able to review two of these itinerant exhibits for Art Eyewitness. In 2015, Puabi's headdress and other treasures from the Penn Museum were displayed in Ancient to Modern: Archaeology and Aesthetics at the Institute for the Study of the Ancient World in New York City. Last year, the Morgan Library and Museum presented a small, focused exhibit, Noah's Beasts. One of the signature Penn artifacts in the Morgan exhibit was a sensational sculpture once associated with the story of Abraham and Isaac, Ram Caught in a Thicket.  It is now thought to represent a goat  grazing on a flowering plant. 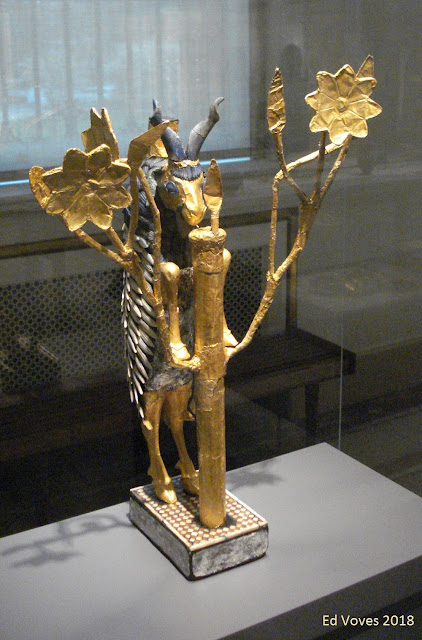 When discovered by the great archaeologist, Leonard Woolley, the pieces of this wonderful work of art was assembled so that the animal's body appeared to be entangled in the plant. This recalled the biblical story where Abraham discovers a ram, just as he is about to sacrifice his son to appease God. Subsequent analysis determined that the hooves of the animal, a Markhor goat, should be positioned lower down, thus depicting it eating. Considering the voracious appetite of the Markhor, also known as the "screw horn" goat, that is a more realistic appraisal.

Now that Puabi and the Ram/Goat have returned to the re-designed galleries at the Penn Museum, it's hard not to quote from the musical Hello Dolly!

It's so nice to have you back where you belong

Buried with Puabi were other artifacts such as an extraordinary game, believed by scholars to be an early form of backgammon. This board game predates the famous Egyptian Game of Hounds and Jackals (c.1814–1805 B.C.) in the collection of the Metropolitan Museum by over six hundred years. The joy at seeing Puabi's glittering headdress and other treasures is tempered by awareness of the human cost of the queen's burial. In an exhibit case not far from the one displaying Puabi's regalia is a crushed human skull. This grim artifact is the head of one of her attendants, sacrificed so that Puabi could journey to the Underworld, the land of the dead which was ruled by the goddess, Ereshkigal, and her consort, Nergal.

The underworld, Ir-Kalla or Kur to the Summerians, was a grim place. The fact that there are so many precious objects in Puabi's tomb was determined by the need to present gifts to Ereshkigal and Nergal, as well as to serve Puabi's needs in her new, everlasting life.

Leonard Woolley, leading the joint British Museum-University of Pennsylvania team, excavated Ur in 1927. Woolley sent a message in Latin to the Penn Museum staff to preserve the news of the spectacular discovery of Puabi's tomb from prying eyes. But it is hard to keep a secret about a "Great Death Pit” as Woolley called the mass burial chamber which was discovered in 1928. Six male and sixty-eight female skeletons were found there, sacrificed to accompany Puabi to the Underworld. 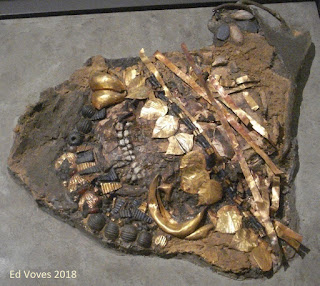 The young woman attendant, whose skull was flattened by the tons of earth which collapsed the chamber, was one of the victims. She is known as Body 53 from grave PG 1237, i.e. the "Great Death Pit.”  Her skull is adorned with leaves of beaten gold and precious gems similar to the headdress of Puabi. 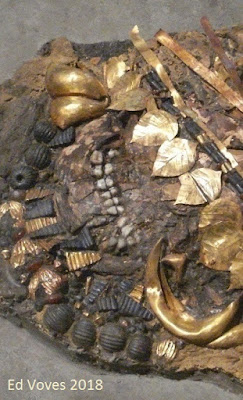 Look closely and the gold and gems become mere details. What catches the eye and holds the imagination is the row of teeth, intact after four millennia. Body 53 was not just a number. She was a human being.

Woolley preserved the skull of Body 53 and several others by covering them with wax so that they would not disintegrate during recovery from the "dig."

Initially, it was thought that the members of Puabi's retinue were drugged before death. But careful study of the Body 53 skull revealed that it had been struck by a military weapon similar to the deadly pole-ax used during the Middle Ages. Perhaps Body 53 died willingly to serve her queen but her's was not a peaceful death. 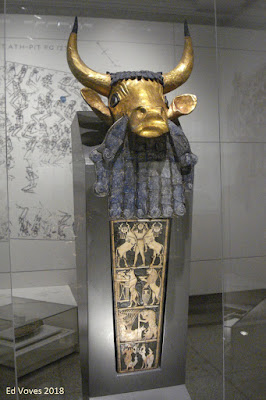 These somber reflections should not detract from the atmosphere of joy and wonder that pervades the newly renovated Penn Museum galleries. These exhibit spaces are brilliantly configured, with a judicious selection of artifacts enabling visitors to grasp the defining "particulars" of these long-ago city-states and empires. Not only treasures like the famous Bull's Head Lyre are on view, but more work-a-day objects are presented as well. 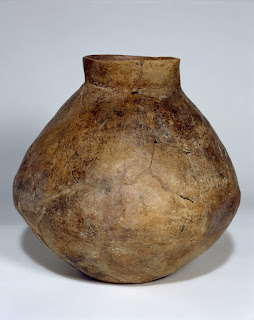 One of  the most significant - and prosaic - artifacts dates to before the dawn of civilization. In 1969,fragments of a ceramic wine jar were excavated by Penn archaeologists in Iran at a place called Hajji Firuz Tepe. It dates to the Neolithic age, between 5400 to 5000 B.C. When it was reconstructed, a reddish residue on the inside was chemically tested and found to be a trace of wine.

At the foundations of civilization can be found  the hum-drum things that make organized human society possible: food, drink, utensils, pots and jars. The Penn galleries have plenty of the latter on view, with well-designed diagrams and explanatory text, outlining their use and the resulting rise of international trade. 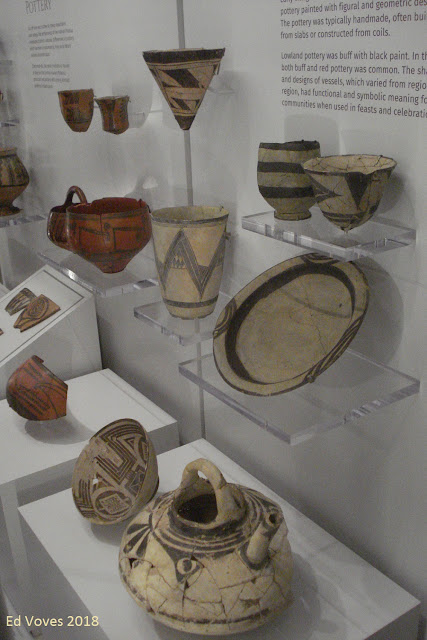 Hajji Firuz Tepe is located in the Zagros Mountains on the northern border of Mesopotamian civilization. It was an important crossroads for the raw materials which the Sumerian craftsman needed, Mesopotamia being almost destitute of minerals and even wood.

Another extraordinary artifact on view illustrates the range  of the trade network that brought rare materials to the city-states that rose along the banks of the Tigris and Euphrates rivers: a vessel made from a gilded ostrich egg. 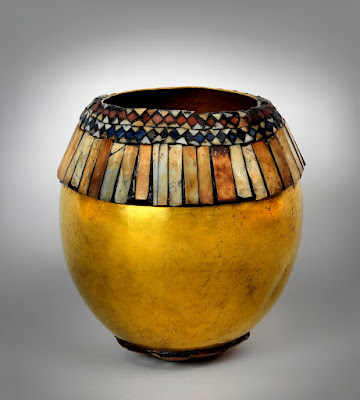 To make this singular piece, Sumerian craftsman hammered a single sheet of gold which was carefully molded around an ostrich egg (ostriches still roamed the semi-arid areas of the Middle East in ancient times). Lapis lazuli, red limestone and bitumen were used to complete the decoration of this astonishing work of art. But equally impressive is the range of merchant partnerships that brought these raw materials to Ur: Afghanistan, Iran, and Anatolia.

Exotic pieces like this gilded ostrich egg could never have been produced but for  unremarkable ceramic ware like the storage jar from Hajji Firuz Tepe. In return for gold and lapis lazuli, the Mesopotamian city-states traded the products needed by nomads and distant cities beyond the Fertile Crescent: wine and grain.

Another crucial innovation necessary for far-ranging trade ultimately laid the foundation for civilization itself. This of course was writing. While the tablets incised with cuneiform symbols lack the "bling" of gilded ostrich eggs, they are so far greater in importance that it seems silly to make a comparison. Yet, the temptation to bypass these small clay documents in favor of  "A" list artifacts like Puabi's golden headdress needs to be resisted. 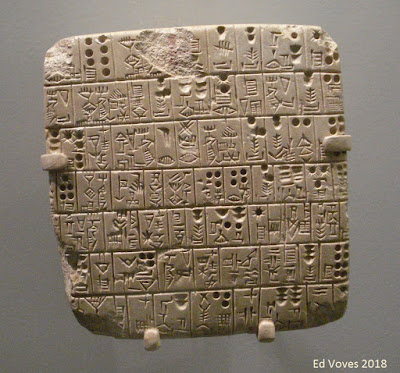 A fairly typical example of cuneiform was to record land deeds or rules for the use of land. The Penn Museum has a remarkable real estate document, using an early, rudimentary form of cuneiform. It dates to c. 3000 BC and bears the inscription of Enkhegal, King of Lagash. The transfer of land recorded here was considered of such importance that the inscription was made on a more durable stone tablet than on fired clay.

The earliest University of Pennsylvania Museum expedition in 1889 unearthed many superb examples of cuneiform writing like the Medical Tablet, dating to 2300 B.C, which is the world's oldest preserved prescription. 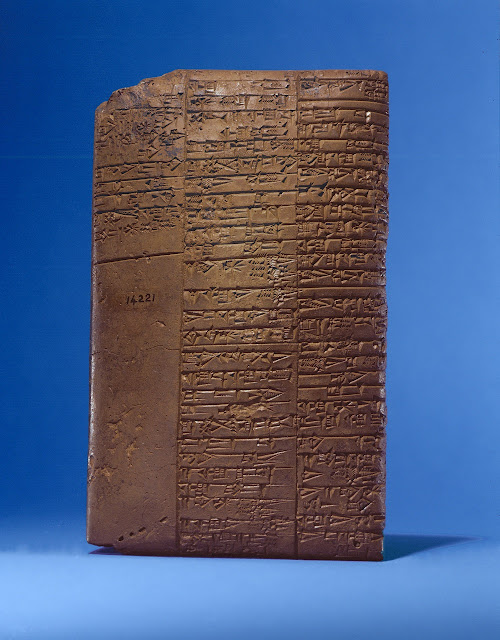 No particular malady or disease was specified on the Medical Tablet, unlike later ones.  Many of the Mesopotamian remedies listed on cuneiform tablets were for poultices, salves or potions. Ingredients ranged from mustard, fig and myrrh to river silt and bat droppings! Stir into wine or beer and if you survive the night, repeat until the prescription is finished.

There was no prescription for the growing number of ills that began to plague Sumerian civilization in the years after Puabi's death. The reasons for the collapse of the independent city states of Mesopotamia are many and complex. The Penn galleries examine the eventual demise of the world's first civilization by focusing on the violent overthrow of one city, Hasanlu, during the ninth century B.C.

Later events in Middle Eastern history are covered as well. The Penn Museum is among the few American institutions that have artifacts from the Scythian nomadic culture. The Scythians roamed across the vast plains of what is now Russia, periodically launching raids against the more settled regions of the Middle East. It is a treat to be able to study the golden ornaments - deer, lions, griffins and other savage animals - that adorned the tunics and riding gear of the Scythians.

Last year, a spectacular exhibit of Scythian art from Russian museums was shown at the British Museum. But given international tensions between the U.S. and Russia, it is unlikely to be presented in America any time soon - or ever.

The rise of civilization in Mesopotamia is one of the essential stories that all thoughtful human beings ought to consider. It is also a difficult - indeed exhausting - subject to master. No institution in the world has done a better job at uncovering the rich complexity of Mesopotamian history and then making it understandable to the general public than University of Pennsylvania Museum of Archaeology and Anthropology.

Given the horrifying news headlines that keep coming out of the Middle East, it often seems to me that civilization will end in that region, where it began five thousand years ago. However, when I go the University of Pennsylvania Museum and see the inspired work that is being done there, in the Middle East galleries and in all the other subject collections, I am filled with hope. 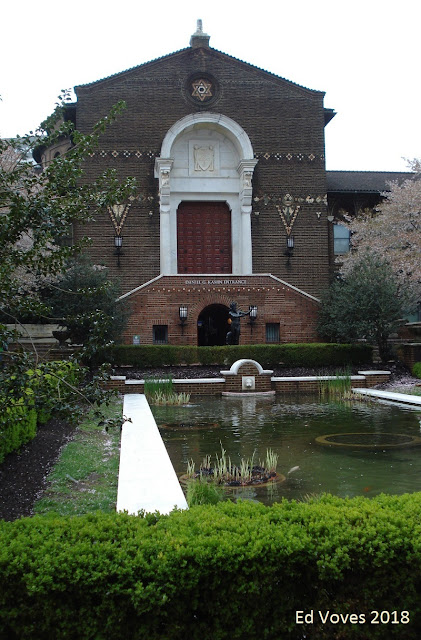 "History begins with Sumer" proclaimed a famous book by Samuel Noah Kramer (1897-1990), a noted scholar at the University of Pennsylvania. If Kramer's devoted colleagues at the Penn Museum having anything to do with it, history will remain an open book for all humankind.

***
Text and Photos: Copyright of Ed Voves, all rights reserved
Photos courtesy of the University of Pennsylvania Museum of Archaeology & Anthropology

Introductory Image:
Ed Voves, Photo (2018) Queen Puabi's Headdress and Cloak. Ur (in modern-day Iraq) 2450 B.C. Gold, Lapis Lazuli, Carnelian and various stones. Joint Expedition of the British Museum and of the Museum of the University of  Pennsylvania, 6th season, 1927-1928.University of Pennsylvania Museum of Archaeology and Anthropology


Ostrich Egg Vessel. Ur (in modern-day Iraq) 2450 B.C. Gold, lapis lazuli, red limestone, shell, and bitumen, hammered from a single sheet of gold and with geometric mosaics at the top and bottom of the egg. British Museum/University Museum Expedition to Ur, Iraq, 1928. University of Pennsylvania Museum of Archaeology & Anthropology, B16692. Photo:  Penn Museum

Posted by Art Eyewitness at 7:51 AM