Modern Times: American Art 1910-1950 at the Philadelphia Museum of Art 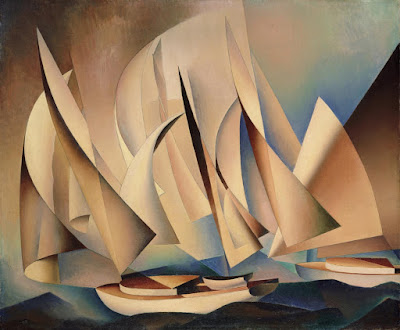 Modern art in the United States came of age between 1913 and 1951. These two years were highlighted by art exhibitions of seminal importance, both held in New York City.  The controversial Armory Show of February 1913 shocked an America still clinging to the moral certitudes of the Victorian Age. Nearly four decades later, the Ninth Street Show, held between May 21-June 10, 1951, marked the triumph of the Abstract Expressionism of the New York School.

A great deal of American art was created in between these two red-letter dates. The range and variety of art produced during those crowded decades is truly impressive, as can be seen in the  recently-opened exhibition at the Philadelphia Museum of Art, Modern Times: American Art 1910–1950. 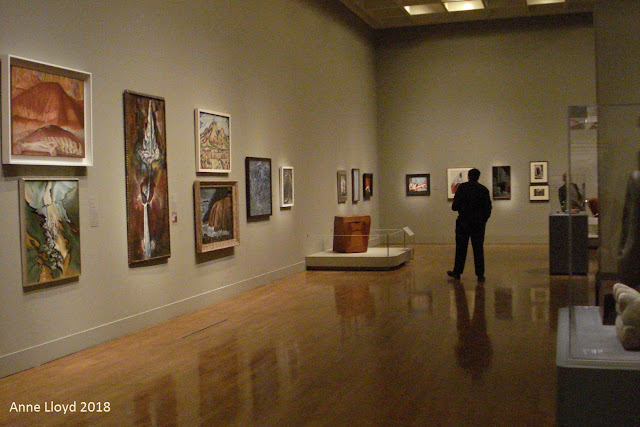 The works of art on view in Modern Times are almost entirely drawn from the collection of the  Philadelphia Museum of Art (PMA). A few come from a private collection which has been promised to the PMA, but there can be little doubt about the exceptional caliber of the museum's holdings of American art.

Many of these works came to the PMA during the cash-strapped 1930's and 1940's. The head of the PMA at that time, Fiske Kimball (1888-1955), used his limited resources to buy or to encourage donations of then contemporary art. The payoff for Kimball's astute collection strategy can be seen in this excellent exhibit.

Modern Times is a comprehensive and thoroughly enjoyable examination of how American art reflected, rejected  and retooled the accepted ideals of society in "these United States." It is brilliantly curated by Jessica Todd Smith. As an added touch, period clothing and artifacts, such as flapper dresses and Prohibition-era cocktail shakers, are used to complement the art on display. 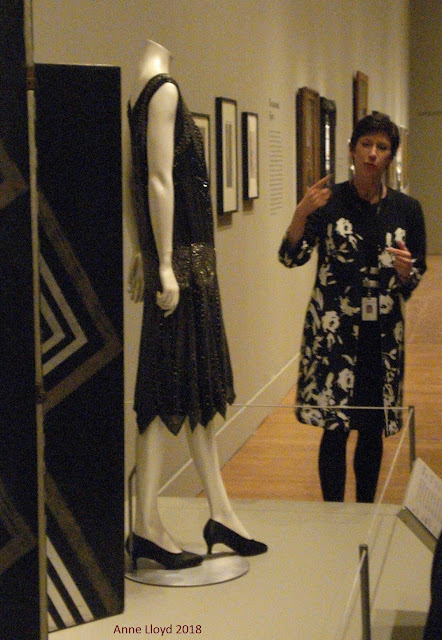 A key work of the exhibit is Georgia O’Keeffe's Red and Orange Streak. Painted in 1919, shortly O’Keeffe moved to New York City, it is both an abstract and a realist work of art. O'Keeffe painted it as an homage to the Texas plains where she had lived prior to moving to the East Coast. O'Keeffe took nocturnal walks, observing the dazzling displays of lighting above the darkened expanse of the prairie.

Such "special effects" in nature are impossible to depict in terms of absolute realism. In fact, no such state exists is nature because the real impact is felt, indeed co-created, in the imagination of the viewer. 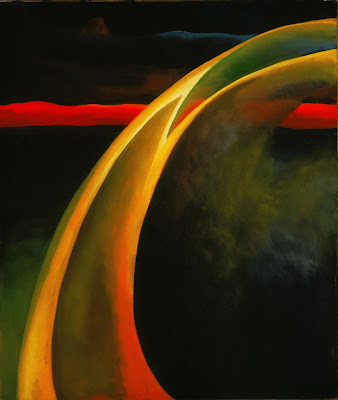 O’Keeffe acknowledged this in letter to a friend, noting that “the whole thing—lit up—first in one place—then in another with flashes of lightning—sometimes just sheet lightning—and sometimes sheet lightning with a sharp bright zigzag flashing across—I . . . sat on the fence for a long time—just looking at the lightning.”

Here we can see the process at work that informed O'Keeffe's often-quoted belief that, "nothing is less real than realism. Details are confusing. It is only by selection, by elimination, by emphasis, that we get at the real meaning of things."

O’Keeffe's Red and Orange Streak came to the PMA in 1949, part of her generous endowment of art works by herself and by her husband, Alfred Stieglitz, who had died in 1946. The PMA is rich in works by both artists and this no doubt helped the museum recently secure a vast archive of photos by Paul Strand, Stieglitz' versatile colleague. 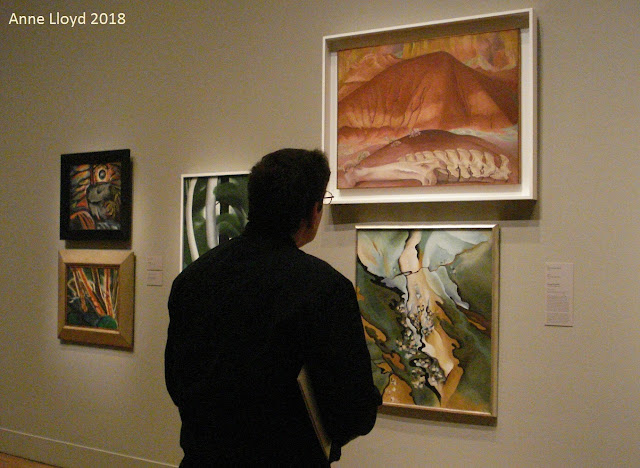 With several of her works on view, we are able to appreciate O'Keeffe's trajectory as an artist and that of twentieth century American art as a whole. More famous for her landscapes of New Mexico, such as Red Hills and Bones (1943), O'Keeffe also painted works evoking the backwoods feel of Stieglitz' summer home at Lake George, New York. What makes this 1924 painting, From the Lake, No. 3, so significant is that O'Keeffe pointed in the direction that American mainstream art would take, leading to the Ab-Ex paintings at the Ninth Street Show of 1951.

The transition from realism to abstraction was but one of the seismic shifts which occurred in the United States during the first half of the twentieth century. The Armory Show certainly led to the efforts of Stuart Davis during the 1930's to "strip a subject down to the real physical source of its stimulus" and then to the 1950's abstraction of Barnett Newman and Jackson Pollock. 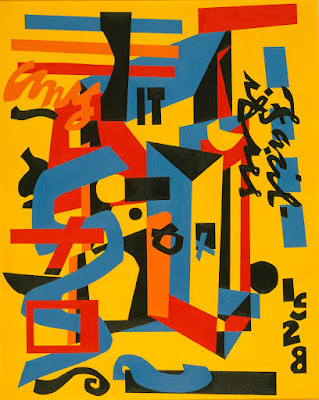 Realism, however, never entirely lost out to Abstraction. Edward Hopper, Andrew Wyeth and O'Keeffe herself maintained figurative art as a force to be reckoned with. The truth about America's search for an answer to the challenges of the twentieth century, in art and in society, is that there was no one solution, no defining creed of Modernism. Rather, there were many.

During this period of bewildering change, American society crossed the divide from regionalism to a nationalistic identity, from a solidly White Protestant moral code to an acceptance of diversified ethnic ideals. For the first time, the creative talents of African Americans and women secured a beachhead on the New York-East Coast art scene. 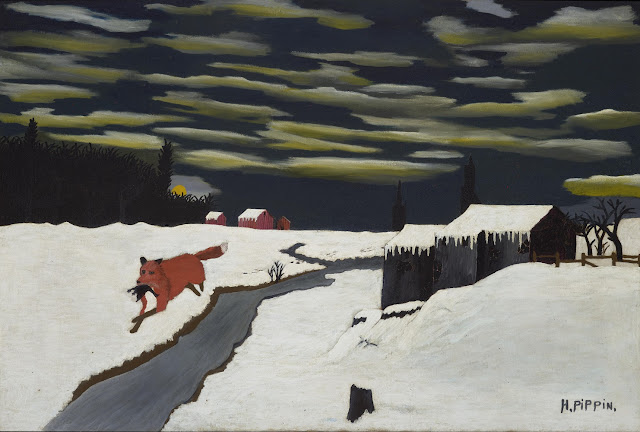 Major African American artists like Beauford Delaney, Dox Thrash and Horace Pippin figure prominently in Modern Times. These pioneering artists were literally heroic figures. Pippin, crippled in his right arm by a wound suffered in World War I, taught himself to paint in a vigorous folk style. His works, evoking the rural atmosphere of West Chester in the Philadelphia suburbs, offer an interesting counterpoint to a very different painter from that area, Andrew Wyeth, who is represented in the exhibit by farm scene as well.

Dox Thrash, likewise wounded in World War I, was a gifted painter and a superlative print maker. His powerful images, especially in this latter medium, celebrated African American life at a time when it was all but marginalized by the dominant White culture . 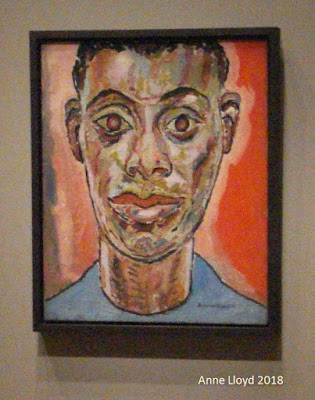 Beauford Delaney (1901-1979) was possibly the most talented of the African American artists on view in the PMA exhibit, as his striking portrait of the writer James Baldwin testifies. Delaney however had the bad luck to begin his career just as the glory days of the Harlem Renaissance were cut short by the Wall Street Crash. After years of struggle and hardship, he eventually emigrated to France in the 1950's.

The role of women in the visual arts is also surveyed in Modern Times. However, the numerous works by Georgia O'Keeffe dominate this aspect of the exhibit and the absence of talented female photographers such as Dorothea Lange and Berenice Abbott is a further weak point.

A more questionable feature of Modern Times is the lack of art related to the World Wars and the economic collapse of the 1930's. In terms of the impact on the lives of America's people between 1910 to 1950, the global conflicts had powerful and enduring effects. So too did the Great Depression. Yet, there are few direct references to these events. 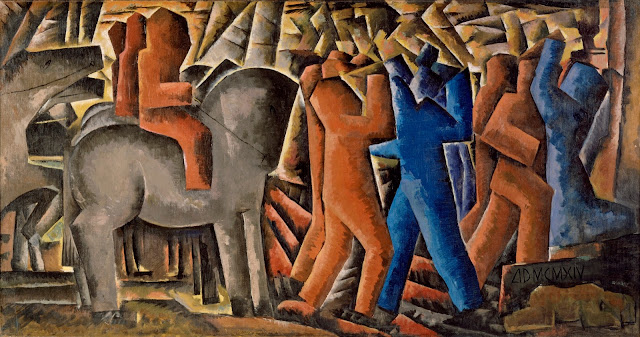 World War I does figure in two major paintings in the exhibit. Both, however, require considerable effort to interpret before their allusions to the horrors of 1914-1918 can be appreciated. In A.D. 1914, Man Ray posed the combatants, men and horses, in a cubist style which directly acknowledges works from the 1913 Armory Show, especially Marcel Duchamp's Nude Descending a Staircase.

More indirectly - and ultimately more emotionally affecting - is Painting No. 4 (A Black Horse), created by Marsden Hartley in 1915. 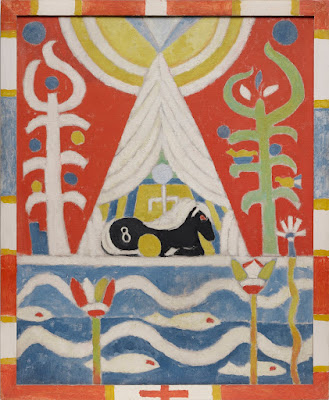 Hartley lived in Berlin at the outbreak of 1914-1918 war. Berlin was both the capital of the militaristic German Empire and the leading city of Gay culture in Europe. Hartley's lover, Lieutenant Karl von Freyburg, was killed in the opening campaign of World War I. In homage to his fallen companion, Hartley created a series of brightly-hued works, masterpieces of human sentiment and of skillful layering of meaning. 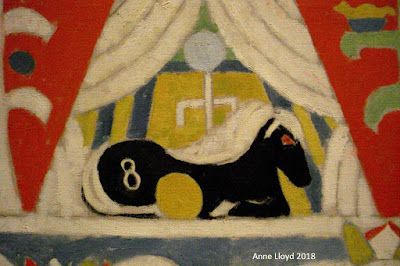 
Von Freyberg was killed on October 7, 1914 at a small French town called Gommecourt, not far from the English Channel. The German and Allied forces were engaged in an attempt to outflank each other called the "Race to the Sea." Neither won and both armies, upon reaching the Channel, began digging trenches. The horror of the Western Front had begun.

This excursion into military history is significant because it reminds us how all of the trappings of military glory, which were held to be important before 1914, were now utterly useless. The medals and insignia, which Hartley painted with such vibrant energy, served no purpose except as talismans to cherish the memory of the dead.

Hartley's Painting No. 4 did exactly that, offering a testament to the Lost Generation of World War I - and II. The lack of similar examples of art from World War II is not such a great omission after all. In fact, World War II produced few great works of visual art, just as the poetry of the 1939-1945 conflict never equaled the verse of 1914-1918.

The theme of Modern Times: American Art 1910–1950 transcends the specific events of the twentieth century, even such an important one as World War II. How the people of the United States conceptualized the industrialized, urban culture which increasingly pervaded every aspect of their lives is the theme of this provocative exhibit. 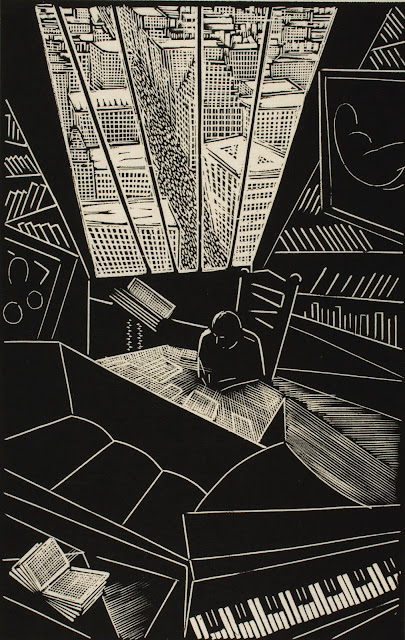 The Philadelphia artist Wharton Esherick created a memorable expression of the challenges posed by the sensory overload of modern life. In the wood engraving, Of a Great City, Esherick shows the novelist Theodore Dreiser almost buried by an avalanche of cultural objects, books, music, works of modern art. Below in the concrete canyon is an ant-like stream of humanity. How can we preserve our individuality under such circumstances?

In political terms, the answer was provided by the title of President Franklin D. Roosevelt's Depression-fighting program, the New Deal. Bold legislative and economic initiatives were tried, but never a fundamental realignment of political power.

Art in the United States emphasized similar concepts, ideals that espoused the "new", the "efficient," the "visionary."  When you look at the PSFS Building in Philadelphia, the first International-style "skyscraper" built in the U.S., you see all these Modernist attributes in place. 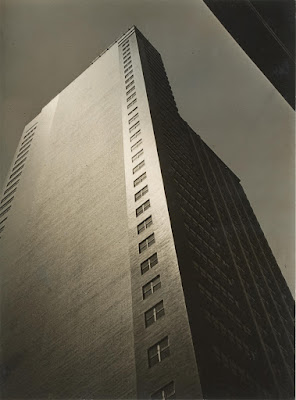 Yet, when you reflect upon the clean, austere lines and the soaring reach of the PSFS building, you realize that this treasure of American architecture has more in common with the wide-open prairie sky that Georgia O'Keeffe saw than with the European ideals of the Bauhaus.

This is the great lesson of the Philadelphia Museum of Art's superb exhibit. No matter how "thoroughly modern" America became during the first decades of the twentieth century, it remained America First.

Anne Lloyd, Photo (2018) Gallery view of Modern Times exhibit at the Philadelphia Museum of Arts, showing works by Georgia O'Keeffe, Red Hills and Bones (1943) and From the Lake, No. 3 (1924)

Posted by Art Eyewitness at 8:07 PM