Renoir: Father and Son/Painting and Cinema at the Barnes Foundation, Philadelphia 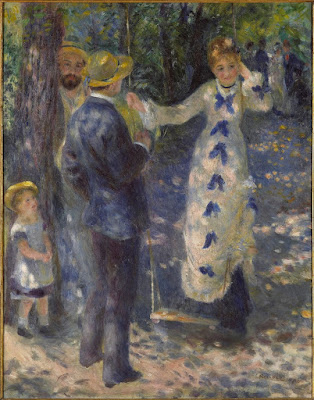 Renoir: Father and Son/Painting and Cinema

If Jean Renoir had not been shot by a German soldier in April 1915, the new exhibit at the Barnes Foundation in Philadelphia most likely would not have been presented. This may seem to be a heartless remark. Renoir himself, in the extraordinary book he later wrote,  acknowledged his "debt" to the Bavarian sharpshooter who fired the nearly fatal bullet.

As a result of his brush with death, Renoir received six months home leave to recuperate. During this "time-off" from World War I, Renoir spent many delightful and inspired hours talking to his elderly father, the great Impressionist painter, Pierre-Auguste Renoir.


Old men forget; yet all shall be forgot,
But he'll remember, with advantages,
What feats he did that day.

Despite being crippled by rheumatoid arthritis and confined to a wheelchair, Pierre-Auguste Renoir did not forget. He remembered the details of his amazing life and the pivotal role he played in the rise of Impressionism. 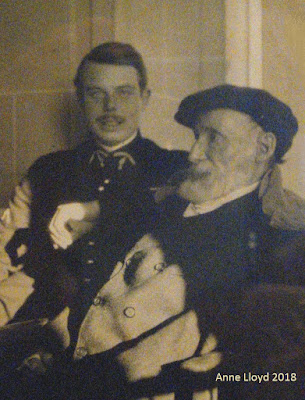 These memories he recounted to his son, a wounded soldier of the Great War. At the end of his long career as one of the pioneering directors of French cinema, Jean Renoir produced an extraordinary recollection of his own, Renoir, My Father, published in 1962.

The Barnes exhibit recreates the lifelong process by which the younger Renoir came to terms with the creative legacy of the elder. The debt he owed his father was considerable.

Jean Renoir is quoted as saying that “I have spent my life trying to determine the extent of the influence of my father upon me.”

This influence was a matter of inspiration, not emulation. Rather than be stunted by the mighty-oak shadow of his father, Jean Renoir did not try his hand as a painter. Rather, he grew in stature as an artist in his own right, a master of a different medium, film making. 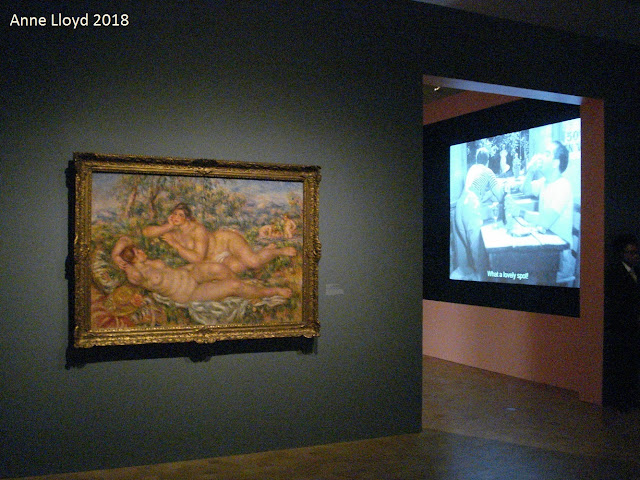 
This father-son partnership is illustrated from the very first display of the Barnes exhibit. This is a video excerpt of Jean Renoir's 1936 film Partie de campagne (A Day in the Country). Based on a short story by Guy de Maupassant (who was a friend of Pierre-Auguste Renoir) it tells the story of an innocent Sunday excursion which becomes the occasion for seduction.

The key scene - the subject of the Barnes video loop  - shows a beautiful young woman, Henriette Dufour (played by Sylvia Bataille), swaying back-and-forth on a swing. Two debonair sportsmen spy her from the window of a country inn where they are having lunch. Their appetites quickly shift from scrambled eggs with tarragon to Henriette on the swing. 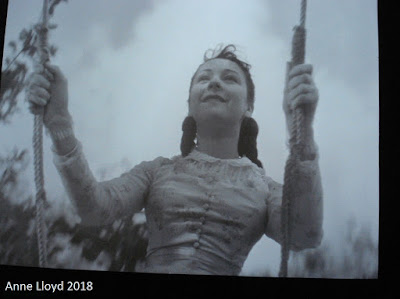 Anne Lloyd, Photo (2018) Film frame from Jean Renoir’s A Day in the Country, 1936/1946, Courtesy of the Criterion Collection & Janus Films
﻿
Fifty years before Jean Renoir filmed A Day in the Country, Pierre-Auguste Renoir had painted The Swing. Here a young woman stands on a swing, accompanied by two admiring men and an adoring little girl. One of the men looks out from the picture and, meeting our gaze, draws us into the sun-dappled grove. There we join him, his companions and the beribboned beauty in a truly magical moment. 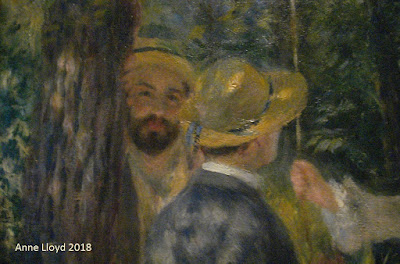 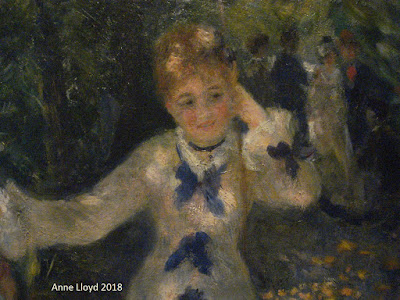 In a tremendous coup, the Barnes secured the loan of this iconic work of art for the Renoir: Father and Son exhibit. As a result, visitors to the exhibition can move but a few feet from viewing a masterpiece of French cinema to studying an icon of Impressionism.

The points of contrast between the film scene and the painting are as important and fascinating as the similarities. When Jean Renoir filmed A Day in the Country during the summer of 1936, France was in the midst of the left-wing Popular Front agitation which contributed to the disaster of 1940. The film is a wistful look backward at what appears to be a more balanced and relaxed way of life.

In 1876, when Pierre-Auguste Renoir painted The Swing, France was beginning to recover from the disastrous war with Germany in 1870-71. The idyllic scene promotes a feeling of recuperation as a nation. This was to prove a short-lived interval. The collapse in 1882 of a fraudulent investment bank triggered a nation-wide "panic." Durand-Ruel, the agent for Renoir and his fellow Impressionists was only saved from bankruptcy by American sales. This financial disaster was quickly followed by political instability climaxing in the Dreyfus Affair.

The era of the Impressionists was thus much like the tumultuous 1930's when Jean Renoir was making his classic films. How fitting then was the fate of A Day in the Country which was not released until 1946 because of production difficulties and the outbreak of World War Two. 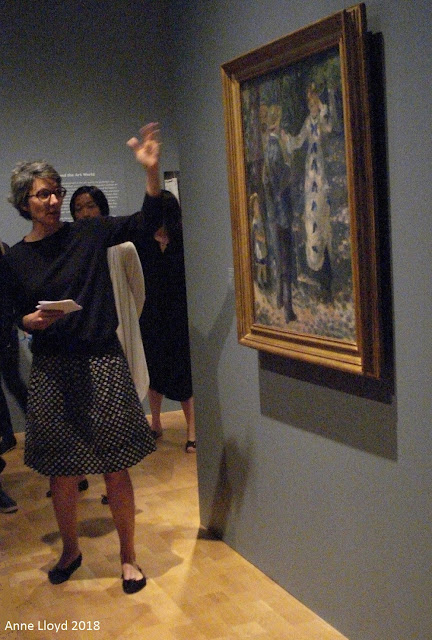 Anne Lloyd, Photo (2018) Sylvie Patry, Consulting Curator of the Barnes Foundation
After this brilliant beginning, the Barnes exhibition proceeds to examine the intertwined lives of the Renoirs, father and son. Since the Barnes collection has 181 Renoir paintings, many of them on view in the collection galleries, there is no need to recount the full story of the great Impressionist. Rather, the paintings on view in the exhibition illustrate the bonds of affection and the exchange of ideas between father and son.

By Jean's birth in 1894, Pierre-Auguste Renoir spent most of his time in the south of France in order to cope with the physical challenges imposed by arthritis. Unable to travel or even grasp his paint brushes to execute fine details on commissioned portraits, Renoir painted what was close at hand - local young women posing as models and his children, especially young Jean. 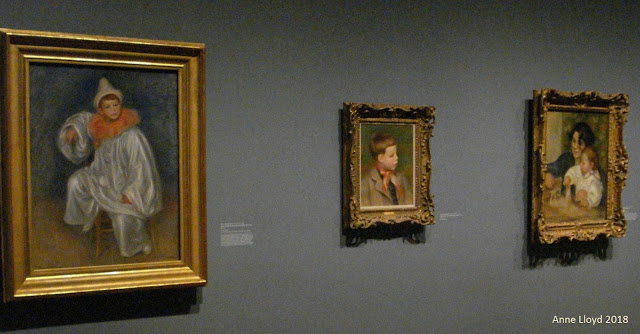 A series of portraits of Jean shows him growing from an infant to a handsome adolescent posing in hunting gear. Pierre-Auguste Renoir was a great admirer of eighteenth century art. By dressing Jean as Pierrot,  Renoir acknowledged the great artist Jean-Antoine Watteau (1684-1721), whose wonderful painting of Pierrot has long been one of the highlights of the Louvre. 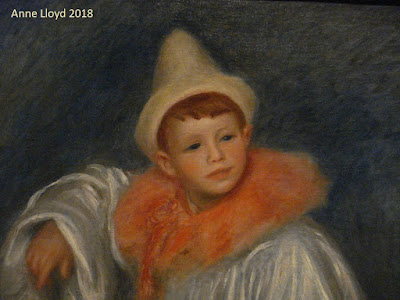 As Jean Renoir matured into a capable, cultured young man, he searched for his own artistic medium on which to devote his talents. At first, he tried his hand at ceramics and the results are astonishing. Dr. Albert Barnes, who was a devoted collector of his father's paintings, purchased forty pieces of Jean's hand-painted ceramic ware.

These relatively unknown works are a highlight of the Barnes exhibit. Most are painted in a vibrant French country motif. This exquisite vase, however, evokes the Arcadia-like atmosphere which the crippled Pierre-Auguste sought to convey in his final paintings.

Creating hand-crafted ceramics is a hard way to make a living. By a unique chain of events, Jean Renoir became involved in the French film industry. During the 1920's, he began directing silent films, followed in the 1930's by his "talkies." Renoir's classic trilogy, A Day in the Country (1936/1946), Grand Illusions (1937) and The Rules of the Game (1939) raised cinema to a level that has seldom been surpassed.

A number of the costumes from Jean Renoir's films are displayed in the Barnes exhibit. One of the dresses has an incredible, indeed exaggerated, trailing skirt. This is a reproduction of a costume from Renoir's silent film version of Emil Zola's Nana (1926). I don't know if it was by chance or by design but when my wife, Anne, took a picture of the "train" of this dress, reflections of a railroad sequence from Renoir's The Human Beast (1938) glimmered on the display case. It was another magical moment in an enchanting exhibition. 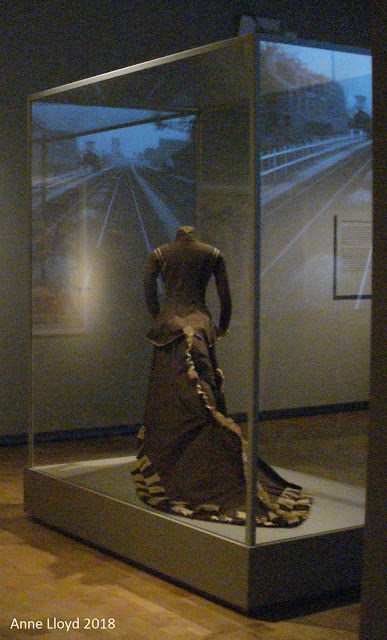 The most magical moment in the exhibition came when I viewed a film clip of Pierre-Auguste Renoir with the art dealer, Ambroise Vollard.  I had seen this clip once, years ago, in an exhibit devoted to Vollard's amazing career. Now, once again seeing the aged Renoir, clearly in pain, yet bursting with creative vigor, I was able to appreciate the film sequence even more. 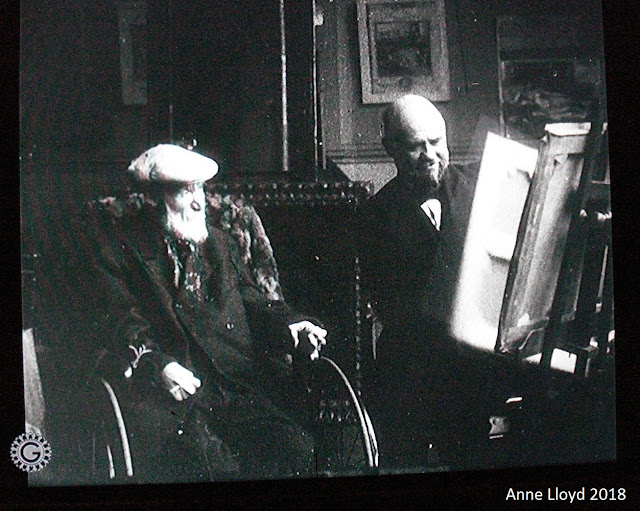 Anne Lloyd, Photo (2018) Film frame from Pierre-Auguste Renoir: Painter, 1920 Silent Film produced by Gaumont Actualities
This life force, what the French during the World War I era called elan vital,was the great gift which the elder Renoir gave to his wounded son during his six months of convalescence. It lasted Jean Renoir a lifetime, during which he shared this gift with the world.
In an extraordinary passage from Renoir, My Father, Jean Renoir described his father's elan vital:

Renoir's conception of life as a state of being rather than an undertaking seems to me an essential explanation of his character, of his art. I should add that this attitude was a joyous one, and that each stage of his life was for him marked by amazing discoveries. He looked at the world with continual astonishment, a feeling of surprise which he made no effort to hide. I saw my father suffer absolute martyrdom, but never saw him looking bored.

You too will enjoy many moments of joy, astonishment and inspiration at the Barnes Foundation exhibit, Renoir: Father and Son/Painting and Cinema. And if you follow the example of Jean Renoir, the creative force, the elan vital, that is present in the exhibition galleries will inspire you as well.

Anne Lloyd, Photo (2018) Gallery view of the Renoir: Father and Son/Painting and Cinema exhibit at the Barnes Foundation, Philadelphia PA.

Anne Lloyd, Photo (2018) Sylvie Patry, Consulting Curator of the Barnes Foundation at the press preview of the Renoir: Father and Son/Painting and Cinema exhibit.

Anne Lloyd, Photo (2018) Gallery view of the Renoir: Father and Son/Painting and Cinema exhibit at the Barnes Foundation.

Anne Lloyd, Photo (2018) Gallery view of the Renoir: Father and Son/Painting and Cinema exhibit, showing a reproduction of a costume from the 1926 film, Nana, directed by Jean Renoir.

Posted by Art Eyewitness at 7:36 PM