Henri Cartier-Bresson: The Decisive Moment at the International Center of Photography 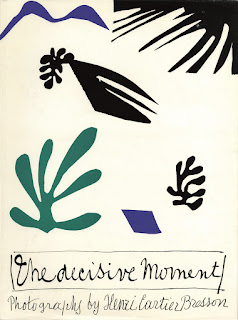 This summer, the International Center of Photography (ICP), located in lower Manhattan, is presenting an exhibition of one of the twentieth's century greatest photographers: Henri Cartier-Bresson (1908–2004). His name has become synonymous to the English-speaking world with the expression "the Decisive Moment."

Cartier-Bresson might well have become a great film director rather than a  renowned "still" photographer, for he briefly worked for one of the legends of the cinema. In 1936, Jean Renoir hired the promising young photographer to serve as second assistant director for his film, Une partie de campagne (A Day in the Country). Except for a handful of short films, however, Cartier-Bresson was destined to be the master of a Leica 35 mm camera rather than a director's clip-board.

To modern-day art lovers, Une partie de campagne brings to mind recollections of the Impressionist paintings of Renoir's father, such as Luncheon of the Boating Party. But there is another point of comparison. Not long after the filming was completed, a year or so  later, Cartier-Bresson revisited this theme. His photo, Sunday on the Banks of the Seine, shows a group of working-class people enjoying a glass of wine and last few nibbles of a picnic lunch overlooking a quiet river scene.

There the similarities end. Sunday on the Banks of the Seine (some prints refer to the river as the Marne) is not just a photo homage to a great film. It is a great work in its own right. It shows a "peak" experience in life and art: the decisive moment. 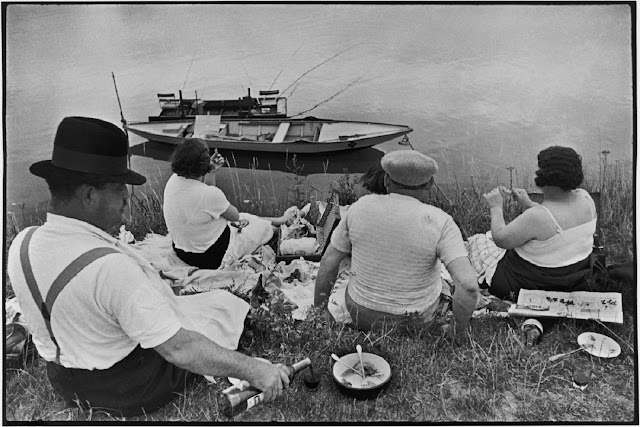 Henri Cartier-Bresson, Sunday on the Banks of the Seine, 1938

What is so "decisive" about this moment? There are five ordinary people finishing-up lunch. One of them, evidently a young woman, is almost unseen except for a wave of hair just visible in front of the cloth-capped gent. There's a row boat tied up to a fishing pier on which we can see two empty seats and a couple of dangling fishing poles. Nothing much is happening here.

Everything is happening here. Cartier-Bresson has captured one of the rarest occasions in human life: a moment of true contentment and real joy. Breathe in the country air. Drink a  glass of red wine. Eat that last bit of cheese. Savor the joie de vivre.

Then the fleeting moment is gone. Yet the memory of happiness remains, nurturing our souls, fortifying our hearts to survive the dark times.

The five people in this photo almost certainly were alive during the terrible spring of 1940, when Hitler's blitzkreig devastated France. I wonder if any of them remembered this sunny aftenoon during the grim Nazi Occupation? Cartier-Bresson was captured by the Germans, though he later escaped in 1943 to join the Resistance. Did he think of this picture as he planned his breakout from behind the barbed wire of the stalag?

Cartier-Bresson certainly remembered this brilliantly-composed photograph in 1952. That year, he published a large format collection of his photos. His American publisher, Simon and Schuster, entitled the book, The Decisive Moment. Those three words would define Cartier-Bresson for the remainder of his life. 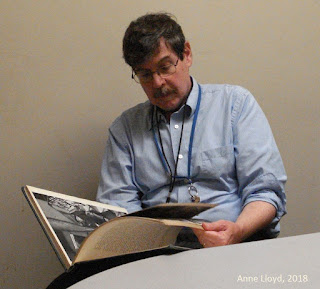 Paging through the phenomenal book, in its first edition, is a unique experience. Although a faithful, high-quality facsimile of The Decisive Moment was published in 2015, I think it is fair to say that they don't make books like this anymore.

One could also make the carping criticism that great photographers like Cartier-Bresson are not around either. That would be both untrue and unfair.There a quite a number of outstanding "lensmen" and "lenswomen" still at work. The disturbing fact about contemporary photography is that the media heirarchy no longer rewards the kind of intiative and independence exemplified by Henri Cartier-Bresson.

As the ICP exhibition text notes, the French edition of Cartier-Bresson's book (with a cover designed by Henri Matisse) had a different title. It was called  Images à la Sauvette or “images on the run.” This was entirely appropriate given Cartier-Bresson's roving, globe-trotting picture taking. There was added irony, however, in that Images à la Sauvette literally defines one of his earliest masterpieces, Behind the Gare St. Lazare, 1932.

Cartier-Bresson used  his 35mm Leica camera to record the extraordinary image of a man leaping over an enormous pool of water. In the background is the Gare St. Lazare railway station in Paris. In 1873, Eduard Manet had immortalized the station, shrouded by steam, as the object of a little girl's curiosity. Here the mystery of Manet's "cathedral of progress" is revealed and deflated. It's just a mundane warehouse. 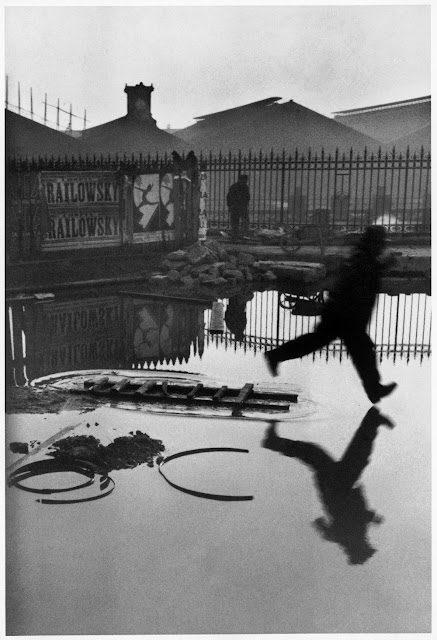 Or so it seems. In a delicious stroke of irony, Cartier-Bresson shows a circus company advertisement hanging from the iron fence. The name of the circus, Railowsky, and a silhouette of an acrobat, are reflected in the water. In that mirrored image, the sense of magic returns. From being a pedestrian trying to keep his shoes dry, the leaping man is transformed into a real acrobat performing in the three-ring circus of life.

How did Cartier-Bresson manage to take this incredible photo? It wasn't posed or staged. Nor was it the result of luck. In the introduction to The Decisive Moment, Cartier-Bresson wrote about the experience of discovering the Leica 35 mm camera in 1932 and his experiments in creating his "decisive moment" style:

I had just discovered the Leica. it became the extension of my eye, and I have never been separated from it since I found it. I prowled the streets all day, feeling very strung-up and ready to pounce, determined to "trap" life - to preserve life in the act of living. Above all, I craved to seize the whole essence, in the confines of one single photograph, of some situation that was in the process of unrolling itself before my eyes.

Cartier-Bresson soon became an absolute master of encompassing entire universes of action and feeling in a single frame. And these photos speak for themselves. 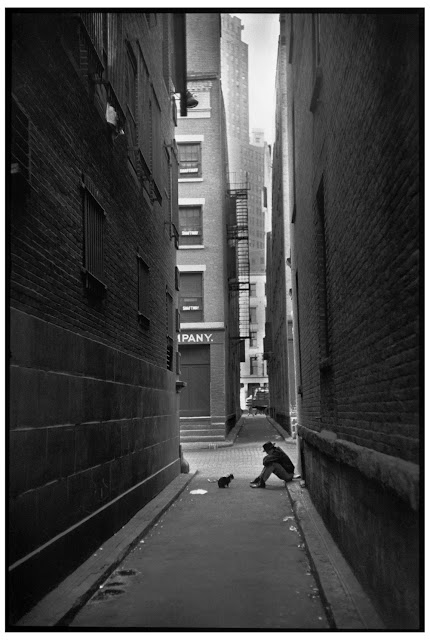 Long scholarly articles could be written analyzing Cartier-Bresson's amazing photo of a man and a cat sitting, face-to-face, in a New York City ally in 1947. What's going on here? Is this a  glimpse of the soul-crushing anonymity of modern urban life?  Or does this photo record an act of caring by a sensitive human for a stray cat - or vice versa?

Does it matter which explanation is correct - or maybe another one we haven't considered? What matters is that this photo recorded a raw, unpredictable moment of life.

Looking at this, and Cartier-Bresson's other photos, we soon comprehend his "secret" for taking a "decisive moment" picture. The "secret" was always to being ready to open his heart and mind, as well as his eyes, to the scene that was "in the process of unrolling itself" before him.

But when to snap the picture? Cartier-Bresson explained:

In photography there is a new kind of plasticity, product of the instantaneous lines made by movements of the subject. We work in unison with movement as though it were a presentiment of the way in which life unfolds. But inside movement there is one moment at which the elements in motion are in balance. Photography must seize this moment and hold immobile the equilibrium of it.

To "seize this moment," Cartier-Bresson co-founded the Magnum Photo Agency in 1947. Fascinated by Oriental philosophy, he went to Asia where he photographed world-altering events like the Communist takeover of China in 1949. The juxtaposition of the timely, newsworthy, event, with timeless moments of apparent harmony was a notable feature of his work in Asia. 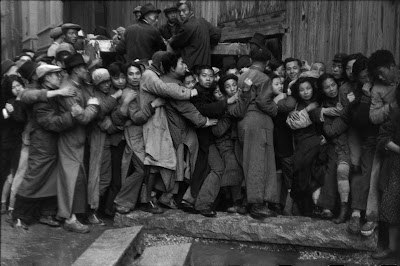 Henri Cartier-Bresson, The Last Days of the Kuomintang, Shanghai, China, 1948

When we look at this desperate scene of people trying to redeem their savings during  the Shanghai bank collapse in 1948, the "decisiveness" of the event is readily apparent. But the "decisiveness" of Rice Field, Sumatra, Indonesia, is there as well. Photographed not long after the more dramatic Shanghai picture, it shows an Asian nation which had just achieved independence from Dutch colonial rule. 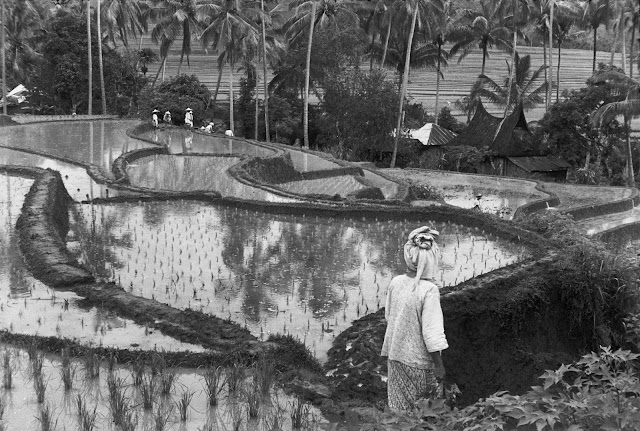 The "timeless" quality of Rice Field, Sumatra, Indonesia invites further reflection. Working in the immediate aftermath of World War II, Cartier-Bresson recorded scenes of human life, little changed for thousands of years. When we open the pages of The Decisive Moment, published sixty-six years ago, we might almost be looking at photos taken in biblical times, of the people and flocks of Abraham or Moses on their journeys to the Promised Land.

As it turns out, the subject of Egypt, 1950 is as fascinating as any scene of an Old Testament patriarch gathering his followers for a trek to Canaan. In the caption to this double-spread photo, Cartier-Bresson explained that the scene was:

A village market held on graveyard county across the Nile at Luxor. The people are called “rats of the grave,” for they  are continually  digging and finding new graves to raise their meager income.

The grave diggers in Egypt,1950 explained to Cartier-Bresson that they refused to live in government-subsidized villages because they were concerned that the burial site they were digging-up for artifacts to sell might be "pillaged" by "invaders." 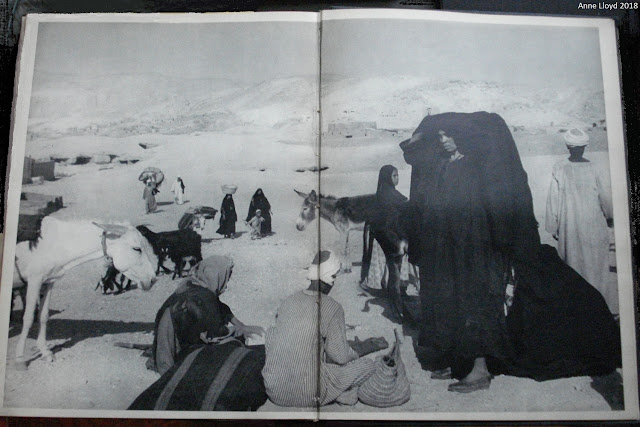 What an amazing photo! Looking at Egypt,1950 brings to mind the saying "you can't make this stuff up!" Now, nearly seventy years later, it would be much more difficult to find such scene.

However, Egypt,1950 is still a timely photo. Ever timely in fact. It is an astonishing look at the combination of courage and folly, tenacity and self-immolation that is human nature. Any photographer might - with luck - take one or two photos of this caliber in a lifetime. But Cartier-Bresson spent most of his lifetime taking such pictures.

Most of his lifetime. The emphasis is on most because Cartier-Bresson began to distance himself from photography toward the end of his life. Cartier-Bresson had trained as an artist during the 1920's before taking up the camera. As he grew older, Cartier-Bresson spent more time drawing than taking photos. By the 1990's, he had largely shifted his focus entirely to sketching.

David Hockney was introduced to Cartier-Bresson during the years as he drifted away from photography. In his book-long conversation with Martin Gayford, A Bigger Message, Hockney made a very perceptive comment on Cartier-Bresson:

Cartier-Bresson's era was the technological epoch between the invention of the 35 mm and the beginning of the era when computers began to have an effect around 1980. He was the master of that period: a fantastic eye.He began when the Leica was invented, and he gave it up a little before Photoshop was invented.

Does this mean that the "decisive moment" in photography has passed? Hockney believes that a "pictorial crisis" is taking place in photography and in film. While agreeing with Hockney on the crisis in contemporary cinema, I am more hopeful regarding street photography. 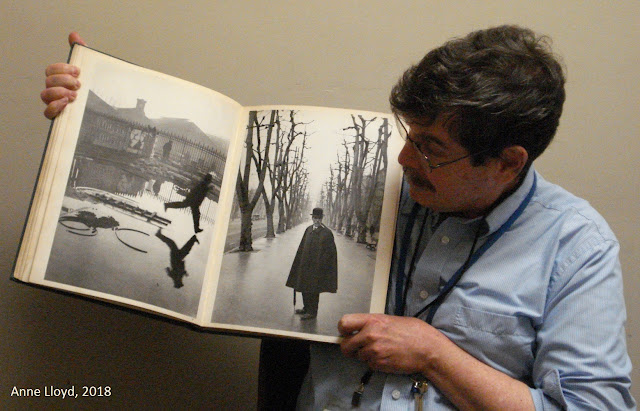 I believe that the deep-rooted humanity that we see on display in the ICP's Cartier-Bresson exhibit continues to hold true. Photography can still achieve "decisive" moments, regardless of the type of camera used. If the heart and mind of the photographer remain open, the camera lens will be open too.

But don't take my word as proof. Go look at Cartier-Bresson's magnificent snapshots of humanity in action and in repose. The ICP exhibit is on view until September 2, 2018.

Follow the lead of the protagonist in Behind the Gare St. Lazare. Run, don't walk.

Anne Lloyd, Photo (2018) Henri Cartier-Bresson, The Decisive Moment (Simon & Schuster, 1952), p. 39-40.  Images shown are the 1932 photos, Behind the Gare St. Lazare, Place de l'Europe, Paris, France (left) and Allées du Prado, Marseille. The copy of The Decisive Moment, held by Ed Voves, is part of the Collection of the Free Library of Philadelphia.

Posted by Art Eyewitness at 5:46 AM