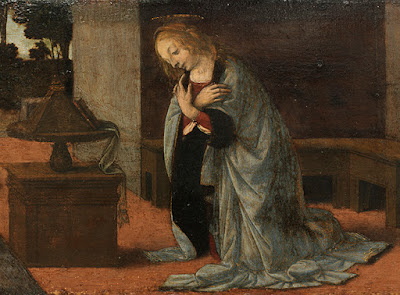 History has not been kind to Andrea del Verrocchio (1435–1488). It has been Verrocchio's fate to dwell in the shadow of Leonardo da Vinci. An excellent exhibition, on view at the Yale University Art Gallery, casts some beams of light on their relationship.

Verrocchio shares his ill-luck with Pietro Perugino (1450-1523) and Domenico Ghirlandaio (1448/49–1494). Each of  these artists was a great Renaissance master.Today they are best known, not for the art they created, but rather for the fame of an apprentice in their studios.

Perugino, an early master of oil painting in Italy, taught Raphael the foundations of art. Ghirlandaio, an extremely skilled fresco painter, briefly had a very young - and very headstrong - Michelangelo as a studio assistant. Michelangelo seldom mentioned his time with Ghirlandaio, nurturing the mystique of his own singular genius. 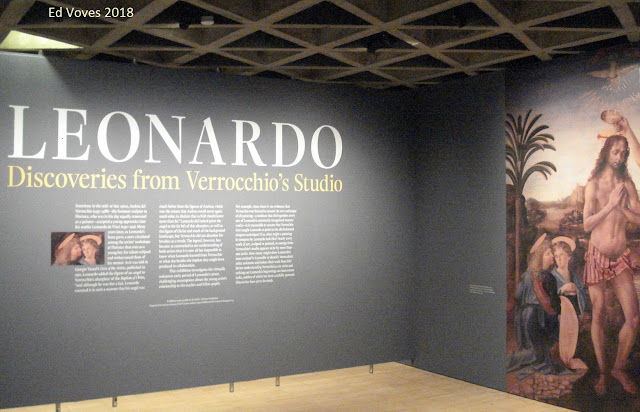 Andrea del Verrocchio was even more unlucky than Perugino and Ghirlandaio. His student/assistant was none other than Leonardo da Vinci.

"Poor is the pupil that does not surpass his master," Leonardo later wrote. Art historians, beginning with Giorgio Vasari, agreed with this remark, to the detriment of Verrocchio's reputation.

In his Lives of the Artists, Vasari wrote that Verrocchio announced he was giving-up on painting after seeing how superb was the work of his acolyte, Leonardo. This is demonstrably false but people love "tall tales." This one has grown all the taller for its constant retelling. 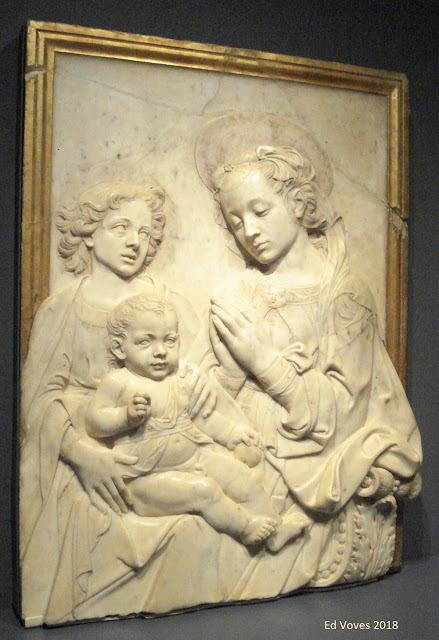 Verrocchio was especially gifted as a sculptor. The Yale exhibit gives us a sample of his talent by displaying a marble relief credited to the Verrocchio studio. Virgin and Child with Angel was created at some point between 1475-85. Many hands were most likely involved in crafting this exquisite work, perhaps the young Leonardo's among them. But Verrocchio was the presiding master and his art studio was one of the best in Florence.

The Yale exhibit displays two works commissioned from Verrocchio's studio during its heyday. One of them, a depiction of the Annunciation, is now believed to be entirely the work of the young Leonardo. The other features two religious figures, one of such transcendent skill that it has recently  been assigned to the canon of art work by Leonardo.

To discover two paintings by Leonardo is a very big deal. He is currently credited with painting a total of fifteen paintings. Others no doubt have not survived or have yet to be identified. Yet fifteen is a small number for such a long life (1452-1519).

One of these  paintings on view at Yale is The Annunciation, on loan from the Louvre. The other, A Miracle of St. Donatus of Arezzo, has recently been deemed a jointly-painted work with another assistant in Verrocchio's studio, Lorenzo di Credi (c.1457/1459-1536).
Each of these paintings filled  a panel or predella at the base of an ornate altar for a church in Pistoia, Italy.

Verrocchio's studio was given the commission for the altar in 1474 and the maestro himself painted the central panel, The Piazza Madonna (or at least most of it). For many years, Lorenzo di Credi was given credit for painting the remaining altar panels, with only minimal contributions by Leonardo.

Opinions have begun to shift and it is not difficult to grasp why. Di Credi was a mediocre painter, as we can see by one of his solo works on view in the Yale exhibit. It is an Annunciation like the one now credited to Leonardo. But it is a banal, unconvincing piece. Not for a moment do you believe that an angel is addressing the Virgin Mary. With Leonardo, the piety and humility of his Virgin Mary, even in this small-sized work, is overwhelming. The most dramatic "discovery" in the Yale exhibition is the attribution to Leonardo of the right hand figure in A Miracle of St. Donatus of Arezzo. This work has been in the collection of the Worcester Art Museum since 1940, listed as a work by Lorenzo di Credi.

Laurence Kanter, Chief Curator of European Art at the Yale University Art Gallery, believes it is a collaborative work, some of it done by di Credi certainly. However, the right-hand figure, St. Donatus, was handled with a degree of psychological depth far beyond di Credi's modest attainments. All the indicators point to Leonardo.

The careworn, other-worldly countenance of  St. Donatus was well within Leonardo's range of talent. However, the facial features of St. Donatus bear some similarity to the treatment  of the faces of St. John the Baptist and Jesus in another famous Verrocchio studio collaboration. This was The Baptism of Christ, painted around 1475. It is an impressive work, but chiefly famous today for one of the angels in the picture is credited to Leonardo. 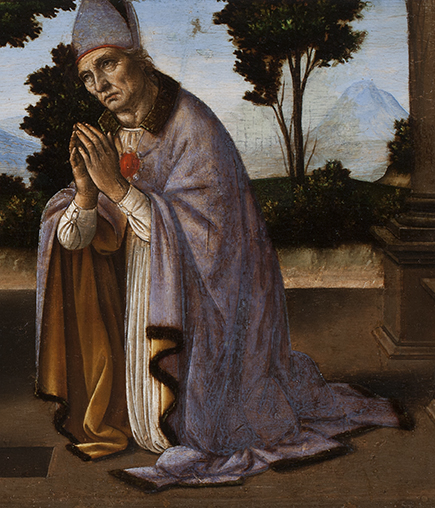 If painted by Leonardo, the figure (and face) of St. Donatus is a testament to his ripening skill. The affinities to Verrocchio's style do not detract from the youthful Leonardo's achievement. After all, Leonardo worked in Verrocchio's studio for a considerable period and it would only be natural that his early work retain traces of the older artist's influence.

Leonardo actually remained in Verrocchio's studio longer than he needed to. This is a very intriguing situation. To a remarkable degree, it reveals Leonardo's habit of working for a patron or "master" - Ludovico Sforza, Duke of Milan, for instance - rather than establishing and managing a studio of his own.

Born in 1452, Leonardo entered into his apprenticeship with Verrochio in 1466, at the age of fourteen. He continued working in Verrocchio's studio until 1476. Yet, Leonardo was admitted to the prestigious artist's guild of Florence, the Confraternity of St. Luke, in 1472. This was the moment for a now established artist to strike out on his own. Why the delay of four years?

From the very beginning, Leonardo's astonishing range of talent was clearly in evidence.  Verrocchio's studio was the best environment for a gifted "all-rounder" like Leonardo to experiment with different forms of art. That is the kind of artist that Verrocchio was himself: goldsmith, painter and sculptor. Leonardo and Verrocchio were well-matched.

The Yale exhibit displays a wide range of works from Verrocchio's studio during the 1470's-80's. These show the points at which the lives and career paths of Leonardo and Verrocchio intersected. Most of all, the great creative environment of Florence during the Quattrocento is revealed. 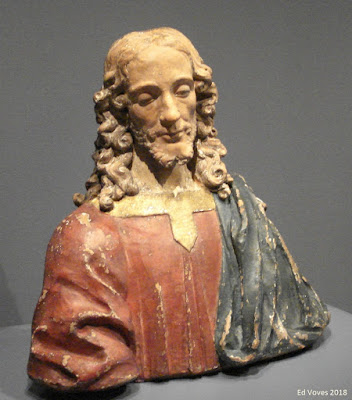 Of these works of art on view at Yale, the terracotta Bust of Christ by Verrocchio made a lasting impression on me. According  to the museum exhibit caption, considerable effort went into its creation:

The core structure of the head and torso appears to have been cast in a mold. Thick slabs of clay were then added by hand and vigorously molded to form the draperies and the animated curls of the hair, while the delicate features of the face were carved into the clay surface to refine their expressive character.

The dedication and skill which went into this powerful portrait of Christ derived in part from  one of Verrocchio's most celebrated sculptures. This was the bronze statue group, The Doubting of Saint Thomas. A full length work, it had been created to be placed in a niche near the entrance of one of Florence's most famous buildings, the Orsanmichele. An influential business association, the Mercanzia, commissioned Verrocchio to sculpt this scene from the New Testament where Christ reveals his identity to a skeptical disciple, St.Thomas.

Verrocchio revealed the true extent of his artistic talent with this bronze masterpiece, which still exists today, though safely removed from the wall of the Orsanmichele. Copies of this portrait bust of Jesus proliferated, many of them substandard replicas. This one, on loan to Yale from a private collection, is so superb that there can be no doubt that it was made in Verrocchio's studio, either by him or under his close supervision.

The Mercanzia commissioned the bronze portrait group of Christ and St.Thomas in 1466-67. The terracotta bust was made between 1470-1483. Most likely it was created during the early part of this date range. During the 1480's, Verrocchio's time was consumed by his work on a great equestrian statue of the Venetian military leader, Bartolomeo Colleoni. Sadly, Verrocchio died in 1488 before this mighty "man on horseback" could be cast in bronze.

Leonardo would therefore have working in Verrocchio's studio during the long hours of inspired, dedicated labor which produced The Doubting of Thomas and the Bust of Christ. The effect on a young artist of being part of the team creating such masterful sculptures had to be powerful - and long lasting. 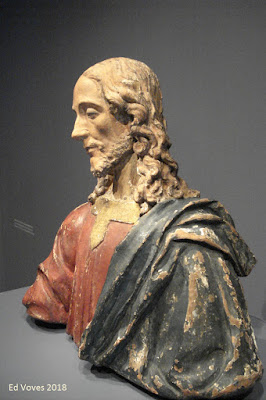 While I was at the YaIe exhibit, I kept looking and looking at the terracotta Bust of Christ. Finally, it dawned on me that this portrait of Jesus, communing with God, with his "Father in Heaven" according to Christian belief, was very close in spirit and in form to Leonardo's depiction of Christ in The Last Supper. 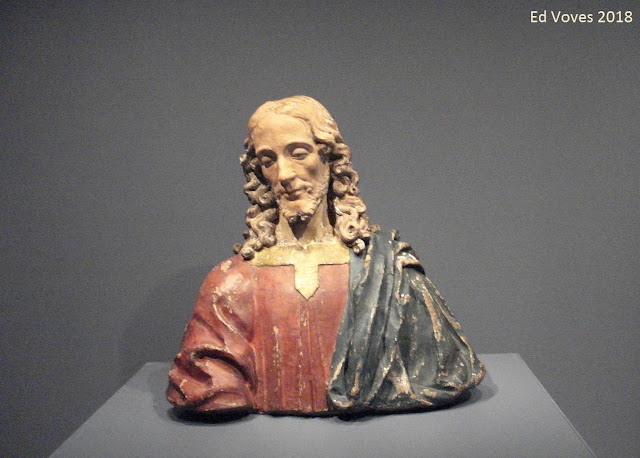 Of course, The Last Supper is one of the greatest, most revolutionary works of art of all time. Of course, Leonardo da Vinci is a singular genius, a "magus" as Andrew Graham Dixon called him in his great study of the Renaissance. Yet, even a High Renaissance master must be taught the basics, the essentials of art. Even a magus must learn the correct amount of perspiration to mix with inspiration.

Leonardo da Vinci first achieved mastery of art working in the studio of Andrea del Verrocchio. This excellent exhibition at Yale, Leonardo: Discoveries from Verrocchio’s Studio, is undeniable proof of the genesis of his genius.

Posted by Art Eyewitness at 8:01 PM