Between Worlds: The Art of Bill Traylor at the Smithsonian American Art Museum 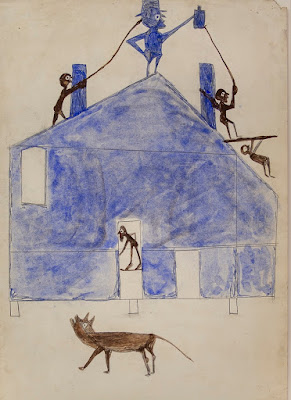 Between Worlds: The Art of Bill Traylor

This brilliant retrospective of the work by the African-American artist, Bill Traylor is aptly named "Between Worlds."

William "Bill" Traylor was born during the last years of the world of slavery and died in 1949 just before the Civil Rights movement began. Traylor's vision was also "other-worldly," combining  elements of African spiritual traditions, evangelical Christianity and personal experience.

A splendid array of Traylor's art is on view at the Smithsonian American Art Museum. This is certainly the most inclusive exhibition of Traylor's drawings and paintings, dealing with all of his major themes. There is so much to see here and so much to try and figure out. 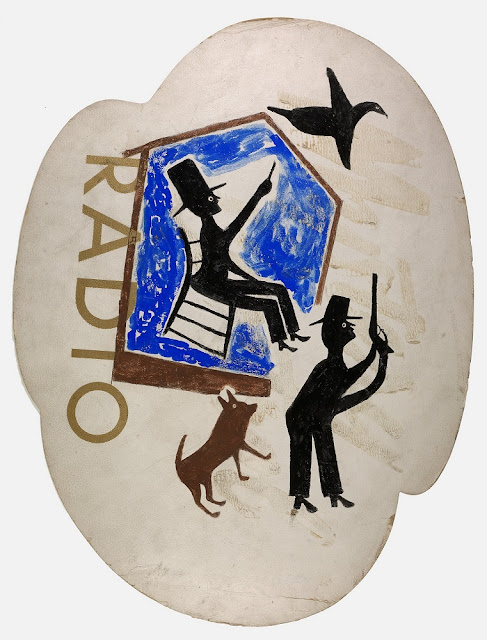 Traylor's art defies ready-made labels and aesthetic categorization. Born into slavery in 1853 (or 1854), Traylor created a uniquely, powerful style all of his own. Drawing and painting on scrap paper or cast-off pieces of cardboard (as in the work above), he created a vast body of work, of which approximately 1,500 pieces survive. There is nothing "primitive" about Traylor's art, though he was entirely self-trained. Although there are surreal elements in his paintings and drawings, Traylor was not a Surrealist.

The greatest insight into Bill Traylor comes from a revealing answer he made to an inquisitive question about the source of his art:

Traylor divulged little else. Beyond a handful of obvious points - the resilience of  the African-American community, the impact of suffering and violence - much of what Traylor depicted eludes easy explanation. Why should it have been otherwise? During the Jim Crow years, the very act of making art by African Americans could be perceived as dangerous self-assertion. 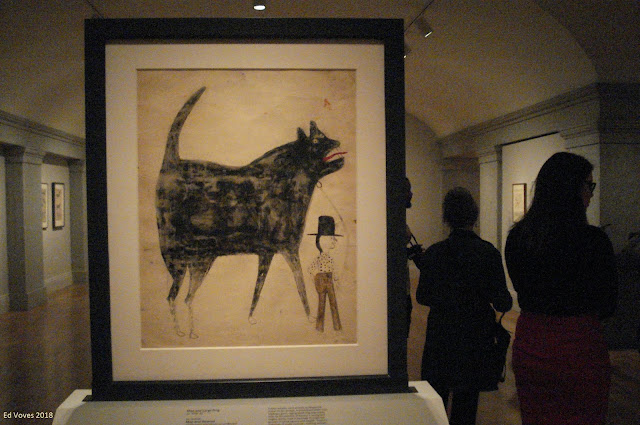 Ed Voves Photo (2018), Gallery view of Between Worlds: the Art of Bill Traylor

As I walked through the exhibition, it occurred to me that Traylor's art works are best explained by the questions they raise rather than the answers we formulate. But to raise these questions, we need to provide the context for Traylor's art-making

After a life spent as a sharecropper, Traylor moved to Montgomery, Alabama in 1928 to look for work. A year later, his son, Will, was killed by two white policemen in Birmingham, allegedly for attempting a night-time robbery. The official verdict was “justifiable homicide.”

These watershed events would certainly have created a breakdown of Traylor's familiar world and a shattering crisis of faith in the future, at least for his son. Traylor was illiterate and therefore could not grapple with his feelings by writing a memoir. He could express himself with drawings and paintings. At some point in the early-1930's, he began doing exactly that. 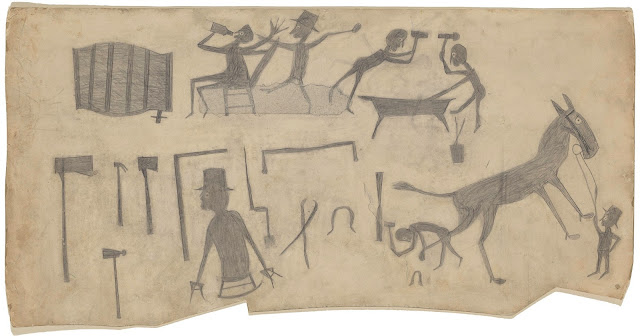 The most significant "question" to be raised about Traylor's art is whether he was engaged in merely documenting his life story or something more primal. Was Traylor aiming to illustrate the cosmic world view of African American people at a pivotal moment in their history?

The two aims are not contradictory. Traylor could supply a narrative of his own struggles, in a codified manner to evade white lynch law. Sitting at his daily place in front of a blacksmith shop in Montgomery, Alabama, Traylor recorded the world as it passed by him on Monroe Street and offered a subtle critique of society. 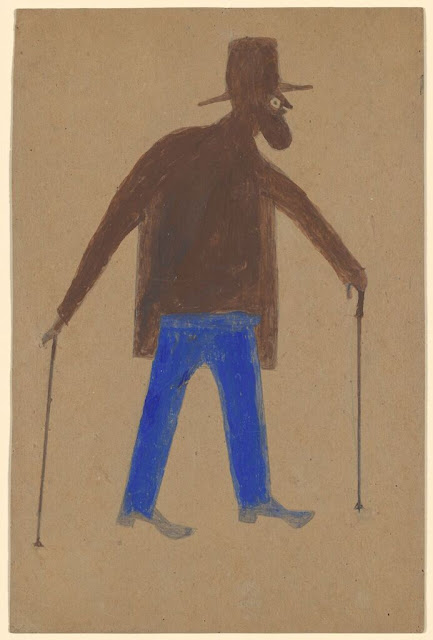 There is no doubt that Traylor included himself in the drama or human comedy that he sketched and painted. We see a frequent figure in these works, a fellow wearing a tall crowned hat and sometimes leaning on walking canes or crutches. That is Bill Traylor portraying himself.

The evidence of his more cryptic works, however, leads one to conclude that Traylor aimed to do much more than chronicle his life and times. Bill Traylor's "eyes were watching God" and doing so from a vantage point that stretched back to Africa. 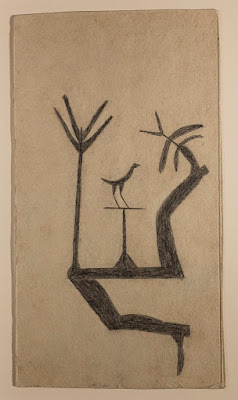 Here we see two well-shod legs. Traylor was a shoe-repairman late in life and valued well-made boots and fashionable clothes. Yet here, the legs are moving in opposite directions and sprouting roots or trees. In the middle is a small bird at repose. Does this bird recall the sacred Sankofa from Ghana in West Africa? The Sankofa symbolized the act of looking to the past in order to search for knowledge useful for future life. 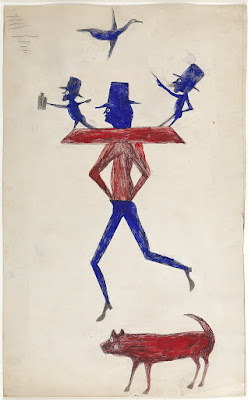 We can see in many of Traylor's works fascinating examples of the way that African spirituality negotiated its way into the consciousness of America. In Man with a Yoke, Traylor depicted a man wrestling with his conscience. It was a familiar theme, often seen in cartoons and advertisements. Traylor may have been influenced by these angel/devil on the shoulder pictures. A far more potent factor was a spiritual concept that had survived the terrible journey from Africa aboard the slave ships.

From West Africa came the potent ideal of the "little me within the big me." The "little me" was the immortal soul, tried and tested by adversity, able to "trabel" in ecstatic vision experiences to the gates of hell and back. What seems like a "good angel, naughty devil" caricature is in fact a powerful expression of the journey of the soul.

The more that one studies the art of Bill Traylor, the greater is the realization that he was not an "outsider" artist as he is often described. Traylor was firmly "inside" the African American cultural tradition. He was also a major spiritual figure and much of his art needs to be interpreted from a religious perspective. 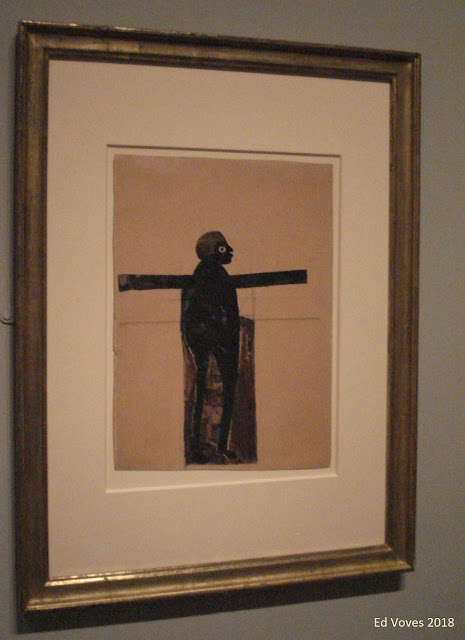 Traylor's profoundly moving Black Jesus is one one of the highlights of Between Worlds.  Given the heart-piercing power of this work, it defies the need for commentary. If any of Traylor's works speak plainly and without ambiguity, Black Jesus is it.

When it comes to the many works featuring animals and birds, interpretation is needed. In the case of the bird in Leg Forms with Bird, an educated guess can be made. This is true of Traylor's Rabbit, as well. Rabbits and hares figure prominently in West African folklore, as trickster figures. Small and vulnerable, the rabbit survives by his cunning and speed. He outwits the predator, living to have the last laugh. 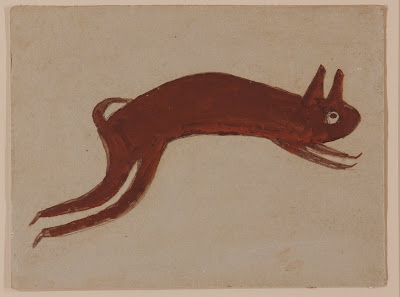 The hare/rabbit trickster reappears in African American folk tales as the clever Br'er Rabbit, who "outfoxes" Br'er Fox. Interestingly, Native Americans of the southern states such as the Cherokee feature a trickster rabbit in their stories as well. Traylor's Rabbit, scrambling for its life, has a long - and distinguished - pedigree. 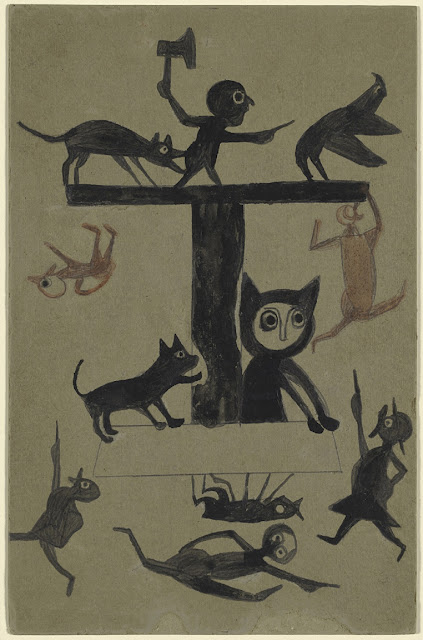 Other works, such as Figures and Construction with Cat, speak from a level of spirituality beyond our comprehension. Here a cat with a "thousand-yard stare" looks beyond a scene of mayhem, folly and cruelty. The cat sits in what appears to be a coffin, while behind him a crucifix is being "constructed." Perhaps in the fullness of time, Traylor's meaning will be discerned, but I am not the person to try.

"Food for thought" is plentiful in Between Worlds at the Smithsonian American Art Museum. Curator Leslie Umberger has spent over five years on this exhibition of Traylor's art. Wisely organized on a thematic plan, the abundant examples of Traylor's works she has selected are easier to grasp, even if the meaning of many is still elusive. 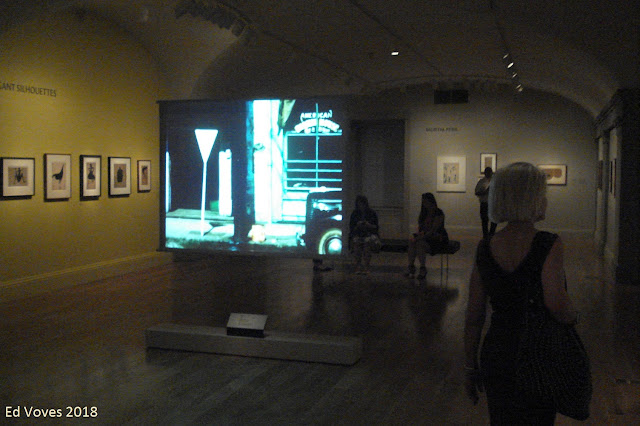 Ed Voves Photo (2018), Gallery view of Between Worlds: the Art of Bill Traylor

Two standout features of the exhibition deserve to highlighted. Umberger, during her exhaustive research, found a short color film of Montgomery, Alabama, dated to 1940-41. A movie screen prominently displays this film, enabling us to see the very people and buildings that Traylor saw and sketched. Sadly, there is not a glimpse of the artist himself, but he is there in "spirit."

No artist lives and works in a vacuum. Traylor was befriended by a young white artist named Charles Shannon, who supplied him with art supplies and collected his works. With a group of other progressive artists, Shannon organized an exhibit at the New South Gallery in Montgomery during 1940. A commemorative booklet with hand-lithographed prints was made for the exhibition and a rare surviving copy is on view in the Beyond Worlds galleries. 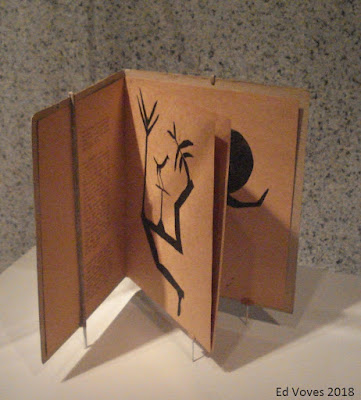 As you behold this singular work of art, the residual power of Traylor's amazing personality is very evident. Conjure, the special magic of African-American spirituality, is on view in that display case, along with the booklet. There is no need of further commentary here, just as I mentioned with Black Jesus.

Just look, just listen in the silence. The meaning of Traylor's art will soon be apparent. It will - to quote Traylor - "just come" to you.

Ed Voves, Photo (2018) Gallery view of Between Worlds: the Art of Bill Traylor, exhibition at the Smithsonian American Art Museum.

Ed Voves, Photo (2018) Booklet from Bill Traylor's Exhibit at the New South Gallery, Montgomery, Alabama, 1940. On view in the  Between Worlds: the Art of Bill Traylor exhibition at the Smithsonian American Art Museum.

Posted by Art Eyewitness at 5:20 PM