Armenia! at the Metropolitan Museum of Art 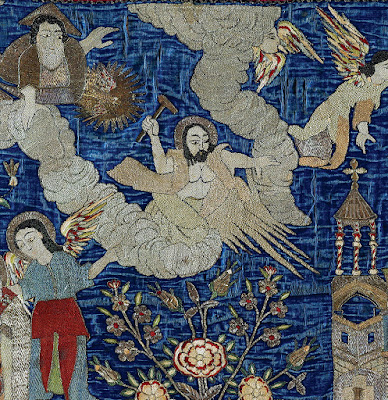 "My kingdom is not of this world," Jesus of Nazareth declared to Pontius Pilate. Ignoring this truthful testimony, the Roman procurator "washed his hands" and sent Jesus to his death.

The same scenario applies to the first Christian nation, an "other-worldly" state which has suffered murderous persecution and exile during its long, tortured existence.

That nation is Armenia.

The Metropolitan Museum of Art has just opened a spectacular exhibition showcasing Armenian art over the course of a thousand and more years, beginning in 301 AD. That year, the Armenian king, Tiridates III adopted Christianity as the state religion for his ancient country.

The vast span of time covered by the Met's exhibit witnessed endless wars and invasions, heart-rending suffering and incredible fortitude. The cast of would-be conquerors changed over the centuries but the result was always the same: the survival and triumph of Armenian national identity. 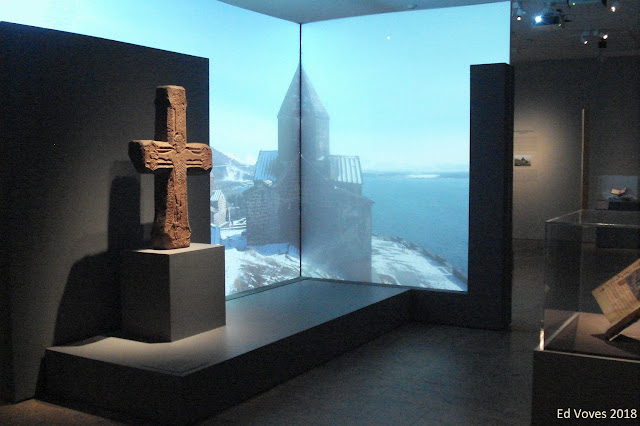 Ed Voves Photo (2018), Gallery view of Armenia! at the Metropolitan Museum of Art
It is absolutely essential, before examining the wondrous Met exhibition, to emphasize that the resilient Armenian nation differs from what is normally considered a "nation." The French scholar, Jean Michel Thierry, wrote in his massive 1987 study of Armenian art that it is "impossible to define Armenia as a state, for it has seldom been one in the full sense of the word, that is to say it has rarely enjoyed autonomous political and social structures.”

Armenian art should not be considered as art made within well-defined borders. Armenian identity likewise transcends the limitations that define what other peoples regard as normal. Thierry concluded:

If it is difficult to define Armenia as a country, a state or a race, the Armenians are nonetheless a very specific people, independent from all others. Armenians are supportive of one another, and have a strong sense of solidarity. They thus form a nation united by these very feelings, which emanate from their own two cultural bases: language and religion.

These two foundations of Armenian identity are exemplified by the impressive number of illuminated manuscripts on display in the Metropolitan exhibition and by the astonishing carved monuments known as khachkars (cross stones), most of which were created during the late Middle Ages. 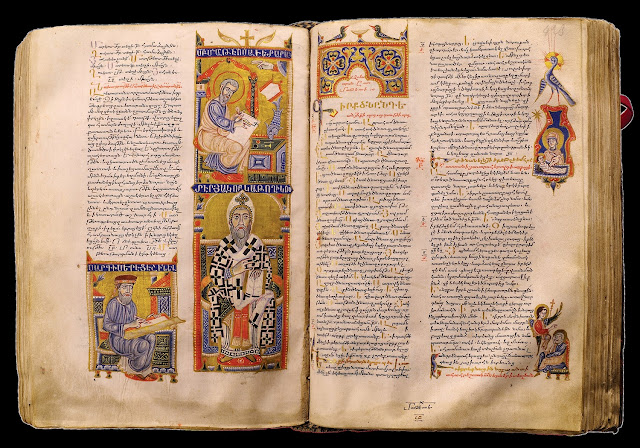 The precious, hand-written bibles and chronicles on display in Armenia! are testaments to an unbroken chain of heritage and religion. The Armenian language is one of the most ancient in the world, a survivor of the Thracian language group which was brought to Central Asia when the ancestors of the Armenians migrated there around 1200 BC. This was the ancient "Dark Age" during which the Bronze Age empires bordering on the Mediterranean Sea collapsed and new political entities arose. The city states of Greece originated during this time of "overturning." So too did Armenia.

The Bible of Yerevan, created  in 1338, is a superb example of the sacred books of the Armenians. It was made for the Cathololicos or leader of the Armenian Church, Hakob II. A very significant - and charming -  feature of this Bible is the portrait of the artist and scribe, Sargis. He appears in the lower left-hand corner of the page, busily working away. This may explain his "nickname" of Pidzak, which means bee.

The above pages of the Bible of Yerevan show the Gospel of St. Matthew. If the language of the Armenians survives from remote antiquity, their alphabet is a more recent creation. The Armenian alphabet was developed about 405 AD by the Christian church leader, Mesrop Mashtots.

A century before, Armenia had embraced Christianity in 301 AD and the need for a vernacular translation of the Bible was paramount. Without an Armenian alphabet, Armenia risked being engulfed by the Greek culture of the Roman Empire. Armenia faced a comparable Persian threat from the east. It was a land-locked version of "between the devil and the deep-blue sea."

Sacred scripture, Christian religious doctrines, the lives of Armenia's saintly heroes, moral precepts and folk wisdom - all were written in the Armenian alphabet and copied into stunningly beautiful manuscripts. And when movable print enabled the publication of books in massive print runs, the Armenians were quick to embrace the new technology. 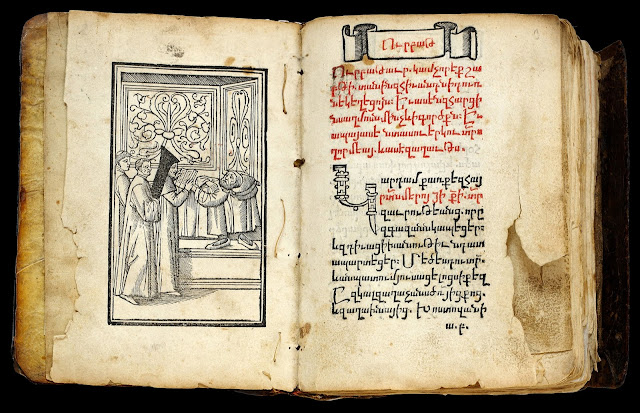 Book of Friday (Urbat'agirk'), the first printed book in Armenian, 1512

The first printed volume in the Armenian language was a religious work called the Book of Friday or Urbat'agirk'. It was published in Venice in 1512, a hugely significant point.

The Ottoman Turkish overlords of Armenia had banned the printing press in 1485 to thwart dissent among their subjects. That decision cost the Turks dearly. Though still a formidable military force for the next century, the Turks doomed their empire by stifling scientific inquiry and technological innovation. The Armenians, through their business contacts in Italy, survived and thrived by using the printing press.

Over a thousand years before, the Armenians, beset by danger on all sides, had embraced Christianity in similar fashion. They did so both from sincere, religious belief and from an instinctive awareness of threats to their existence. That is still true today. No greater testament to the faith-based endurance of Armenia exists than the awesome khachkar. 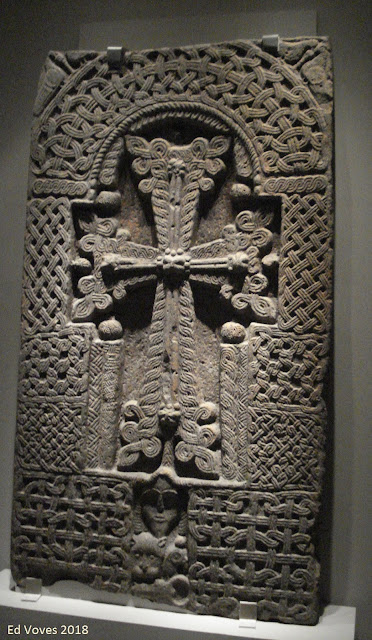 This stunning work of art and faith stands six feet high, taller than the average height of a man during the thirteenth century. At the very top corners, are two pairs of birds who symbolize the risen dead. At the foot of the cross are the symbols of the four gospel writers: the ox at the very bottom for St. Luke, the lion for St. Mark, the eagle for St. John and the face of a man for St. Matthew. 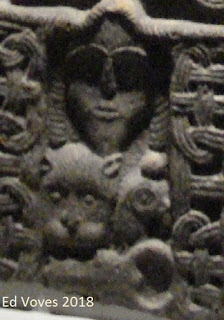 The man's face may also  have been intended for "double duty." In Christian imagery, a skull is often shown at the foot of the cross, based on the belief that the site of Jesus' execution was the burial place of Adam. In this way, the khachkar is doing "double duty" as a memorial to a Christian believer and as a symbol of the power of Holy Scripture.

Thousands of khachkars were sculpted over the centuries, beginning around 800 AD. Most were original works of devotion, rearing-up over the rugged countryside of Armenia. For the most part, khachkars were commissioned by individual patrons to express their desire for the salvation of their souls and of their loved ones, living and dead. 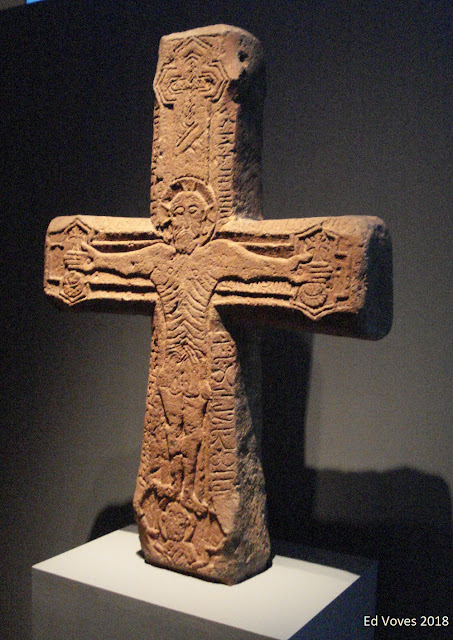 Some khatchers, from the Lake Van region, reused ancient stele monuments from the predecessors of the Armenians, the Urartu kingdom. Most khachkars are inscribed rectangles of stone, but there are rare examples like the one shown above that were carved in a cruciform shape.

Looking at the khachkars in the Armenia! exhibition taps into primal emotions. Khachkars, without exaggeration, are some of the most impressive works of human faith and creativity in the world.

Sadly, khachkars are also objects of desecration. Hundreds have been destroyed or damaged, casualties in a deliberate campaign of cultural destruction aimed at removing all trace of Armenian civilization. 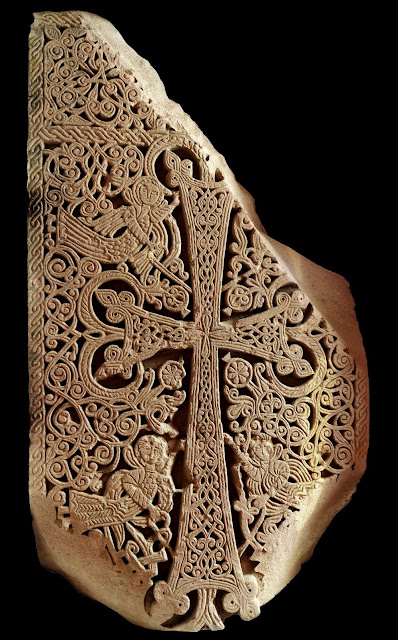 Fortunately, the Metropolitan Museum of Art has played a key role in promoting awareness of the beauty and importance of the imperiled art of Central Asia, the Middle East and other war-torn areas. Armenia! follows in the footsteps of some of the most landmark exhibitions of modern times: The Glory of Byzantium (1997), Byzantium: Faith and Power (2004), Byzantium and Islam (2012).

A common thread - indeed a crucial point - of all these exhibitions has been the role of Dr. Helen C. Evans of the Metropolitan staff. She was the curator of each of the Byzantine exhibits as well as Armenia! The "before and after" effect of the earlier ones dealing with the art and culture of the Eastern Roman or Byzantine Empire has been remarkable. 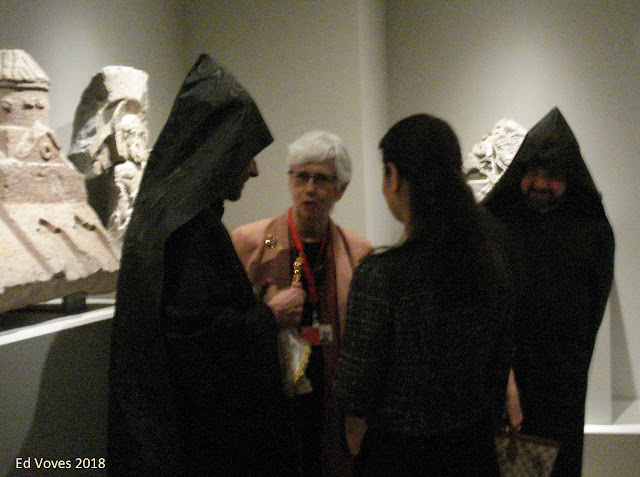 Dr.Helen C. Evans (center), with members of the clergy of the Eastern Diocese of the Armenian Church of America, at the preview of Armenia!

Before the Met's Byzantium exhibits, many art text books often glossed over Byzantine art - but no longer. Hopefully, Dr. Evans' tremendous efforts on behalf of Armenian art will have the same beneficial result.


Dr. Evans has assembled over 140 masterpieces for the Armenia! exhibition. Like its Byzantium predecessors, the sheer number, variety and antiquity of these works leaves the gallery visitor stunned by the magnitude of this curatorial achievement.

Many of the works of art on display have never traveled from Armenia or from the communities of Armenians living in Iran and Europe. I hope in a future review to focus on some of the more unusual pieces in the exhibition. For now, I will highlight three artifacts from the exhibit, including a carved door, dating to the fifteenth century that is little short of miraculous.

The first of these signature works need a bit of explaining. One is a tapestry showing Chinese dragons. What seems an unusual piece to include in this exhibit is indeed one of the key works of Armenia! at The Met. 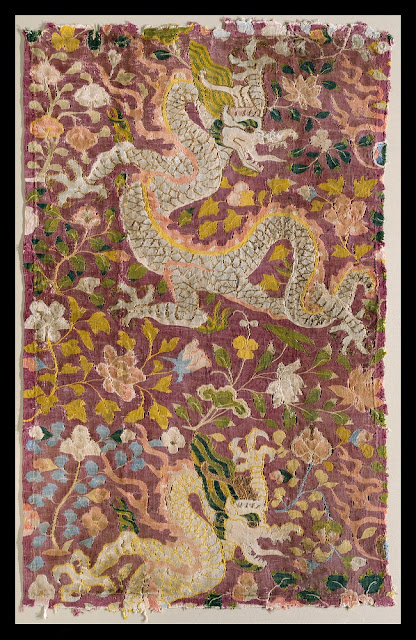 During the long period covered by the exhibition, Armenian merchants played a crucial role as "middle-men" on the Silk Road trade. So important were the Armenians in the east-west commerce during the Middle Ages, that the otherwise ferocious Mongol khans utilized their talents and, for the most part, allowed them to keep their heads on their shoulders.

The silk treasured in Europe was principally used to create garments of western design for the nobility and merchant class. But this tapestry, dated to the eleventh or twelfth centuries, is worthy of note because it shows a direct influence on Armenian art. 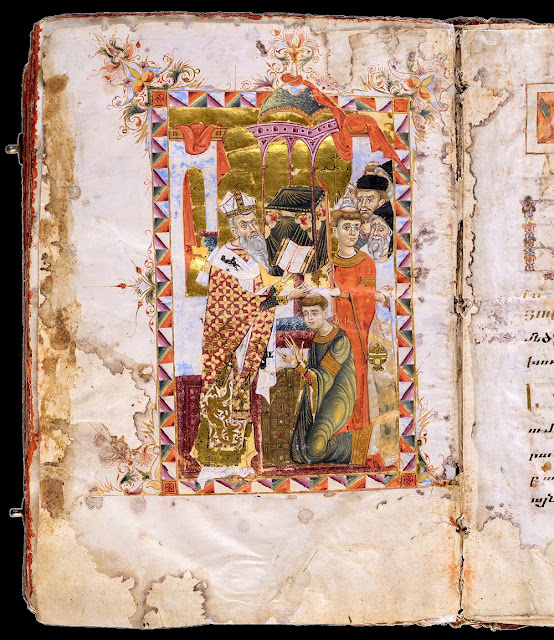 Gospel Book of Archbishop John, made in Sis, Lesser Armenia, 1289

An illuminated manuscript, the Gospel Book of Archbishop John, created around 1289 AD, shows a Chinese dragon on the hem of the vestments of a very high-ranking Armenian clergyman. Archbishop John was the half-brother of the Armenian king, Hetum I. The dragon robe which he wears was likely a gift from the Mongols. It takes considerable attention to spot the dragon on the archbishop's robes but it's worth the extra effort.

In the case of the carved wooden door from the Church of the Holy Apostles at the Monastery of Sevan, an entire review seems in order for just this one, wondrous work of art! 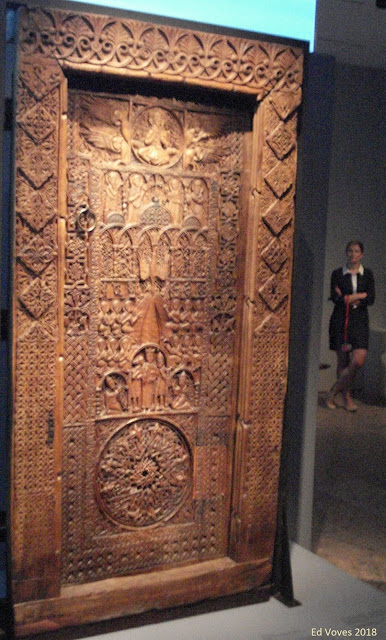 
I kept returning to look and study this astonishing door while at the Armenia! exhibit. Comparison with the "Gates of Paradise" of the Baptistry of Florence seems entirely appropriate. Created slightly later than the Renaissance masterpiece of Lorenzo Ghiberti (1425-1452), the door was carved from walnut wood in 1486. An inscription at the bottom mentions the artists, Abraham and Grigoris.

While the "Gates of Paradise" depict historical scenes from the Old Testament, the Sevan doors are dedicated to the heaven-oriented spirituality of the New Testament. 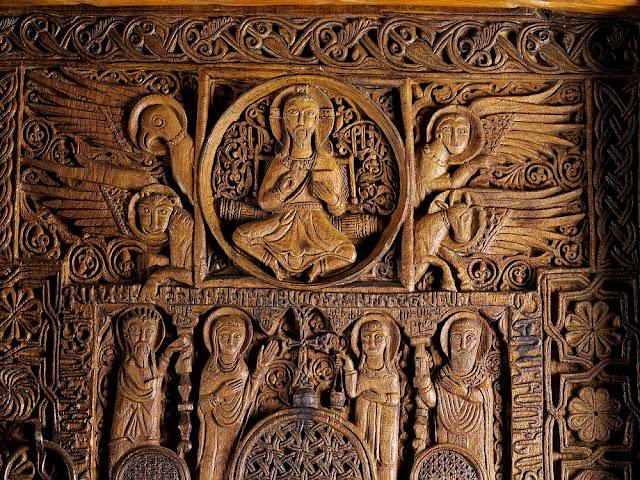 Here we see the risen Christ attended by the symbolical creatures of the four gospel writers. Below this scene, Christ's disciples are shown, receiving the Holy Spirit on Pentecost. Stylistic elements from khachkars and illuminated manuscripts are clearly identifiable.

The Sevan Monastery doors are the total embodiment of the Armenian view of the cosmos. For all of their mercantile acumen and survival skills, the ultimate goal of life in Armenian civilization is the resurrection of the immortal soul and union with God. 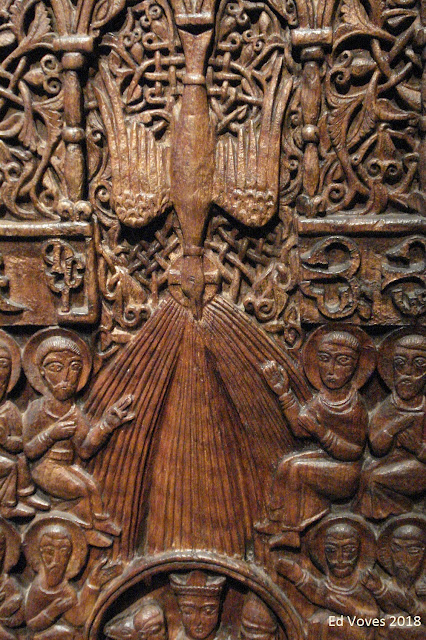 Carved Door from the Church of the Holy Apostles (detail)

The works of art on view in Armenia! testify to this "other-worldly" world view. Armenians, past and present, well know the importance of keeping the eye of faith focused on the life of the world to come.

***
Text: Copyright of Ed Voves, all rights reserved
Images courtesy of the Metropolitan Museum of Art and Ed Voves

Ed Voves, Photo (2018) Gallery view of the Armenia! exhibition at the Metropolitan Museum of Art.

Ed Voves, Photo (2018) Dr. Helen Evans, curator of Armenia! at the Metropolitan Museum of Art, with members of the clergy of the Eastern Diocese of the Armenian Church of America.


Carved Door, made in Sevan, Armenia. (Detail views, courtesy of the Metropolitan Museum of Art and Ed Voves, 2018).

Posted by Art Eyewitness at 5:50 PM