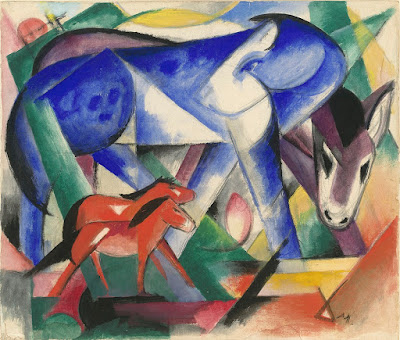 During  the spring of 1915, a hastily scrawled postcard arrived at the office of Der Sturm, the avant garde gallery and publishing firm in Berlin. It was a German Army postcard, a quick message format designed to let family and friends know that their soldier son or husband was alive.

In this case, the postcard was addressed to Herwarth Walden, director of Der Sturm, requesting him to sell a painting, The Yellow Cow, for 900 marks. The sender was Franz Marc, Expressionist painter and co-founder of the Blue Rider art group.


The Yellow Cow now hangs on a gallery wall in a special exhibition at the Neue Galerie. This outstanding New York City museum is dedicated to German and Austrian art of the early twentieth century.

Franz Marc and August Macke, 1909-1914, is a jaw-dropping beauty of an art show. It tells the story of Marc and his close friend, August Macke, who raised modern art in Germany to a pinnacle of insight, innovation and skill during the glorious interlude just before the opening shots of World War I.

In his brief 1915 message to Herwarth Walden, Marc concluded with a remark on the 900 marks he hoped to make from the sale of the painting.

"Of course that is the war price and in no way binding for future times, but only for the time being," Marc wrote. "It would be really worth my while to sell now."

"The time being" was in fact all the time Marc had. Less than a year later, in March 1916,  Marc was struck in the head by a shell fragment during the murderous Battle of Verdun.

August Macke (1887-1914) did not even have the "time being." A devoted husband and father of two  young children, Macke had been drafted into the German Army at the very beginning of the war. In late September 1914, Macke was killed in action in France. He was one of the 116,750 Germans to be listed on the "official" record of war dead on the Western Front for the first four months of World War I, August to November 1914.

By November 1918, Germany had lost a total of 1,773,700 war dead. It is a sobering thought that two such brilliant artists and compelling human beings should have had their lives cut-short during this futile, insane slaughter.

This tragedy was compounded by Marc's posthumous reputation under the Third Reich. Despite his patriotic service and  death in battle, the Nazis blacklisted him after they gained power in 1933. Why would a German hero suffer such a fate?

Marc had enjoyed warm friendships with Jews like Herwarth Walden.  His collaboration with Vasily Kandinsky led to the formation of the Blue Rider group, the kind of progressive and idealistic collaboration which Hitler detested.  As a result, Marc's masterpiece, The Tower of Horses, was among the paintings vilified in the Degenerate Art exhibition of 1937. It disappeared afterward and has never been seen since.

Despite this catalog of woe, the Neue Galerie's Franz Marc and August Macke, 1909-1914 is a life-affirming experience. It is a brilliantly mounted exhibition with paintings that seem to levitate above the shining floor, rather than hang on the gallery walls.


Indeed there is something of a church-like atmosphere to the exhibition, rather appropriate for these two artists.

Marc was a notable for his spiritual leanings - he had briefly considered study for the ministry. Following several years of doubt and depression, he journeyed to Greece with his brother Paul, a scholar of Byzantine religion and culture. There he witnessed forms of Christian devotion little changed since the early Church.

Abandoning his Impressionistic landscapes, Marc developed a form of color-coded  symbolism. Animals, rather than humans, embodied the virtues and values of the world as he saw - or felt - it. This was a unexpected turn, given Marc's earlier aspirations to become a clergyman.

The paintings of Marc's "blue horse" period are more worthy of Rousseau than of the Apostle Paul. Yet there is a psychological sophistication to The Dream, one of my favorite works by Marc, which shows an affinity with the theories of Sigmund Freud.


In 1908, just as he began to paint his now-celebrated blue horses and yellow cows, Marc expressed his views in a revealing letter:

I am trying to intensify my feeling for the organic rhythm in all things, trying to establish a pantheistic contact with the tremor and flow of blood in nature.

For a few years, Marc achieved spectacular results, bringing forth on his easel a vision of Paradise before it was "lost."


Every manner of animal - deer, foxes, monkeys - migrated across the canvases upon which Marc worked. This is one of the surprises of the Neue Galerie exhibition. Famous for painting horses, Marc embraced the family of creation in a truly Peaceable Kingdom.

August Macke had something of missionary zeal, too, though his subject was not a  spiritual realm. His signature style paintings have a stained-glass effect, with bold, contrasting colors and, quite often, strongly outlined forms.

Macke, unlike Marc, used this format to record the world as it is. A quote from Macke neatly sums-up his philosophy:

He who paints must be able to see an object in its uniform tone, in its whole magic, be it a flower or a human hair. All paintings created this way are the mirrors of a soul in harmony. It is quite simply vast and has no need of symbols to paint the sea.

To an extraordinary degree, Macke evoked a Paradise "regained" just as his friend, Marc, was doing. Macke, however, populated his Eden with people. Most often they were anonymous, featureless beings or nearly so. In virtually every scene, there is a sense of well-being, of the world at peace with itself, a world as people have longed for it to be.


Lady in the Park (1914), awkward, homely, yet endearing, is an inhabitant of Macke's Arcadia. How different she is from Ernst Kirchner's predatory prostitutes "making the rounds" on Berlin's Potsdamer Platz, painted around the same time!

There is only the faintest delineation of eyes and expression in Lady in the Park. The erasing of physical features from many of his paintings is a troubling aspect of Macke's oeuvre.

In 1909, Macke painted a striking portrait of his wife, Elizabeth, pregnant with their first child. It is a lovely, loving work and one is left wondering why Macke abandoned portraiture.

How the two artists met provides insight into their respective characters. Macke was a dedicated patron of art museums and galleries. Visits to France led him to exhibitions of the Fauves and he enthusiastically embraced the vigorous use of color by Matisse. In January 1910, Macke saw two lithographs by Marc in a Munich gallery. He immediately sought the address of Marc's studio and they struck-up a close friendship.

It was Marc, personable, passionate and visionary, who saw the potential for a collaborative relationship. He wrote Macke, "I consider it a great stroke of luck to have at last met a colleague of so inward and artistic a disposition - rarissme! How pleased I would be if we were to succeed in exhibiting our pictures side-by-side."

The opportunity to jointly exhibit their work came quickly. the Blue Rider group - in reality a breakaway faction from an earlier group, the Neue Künstlervereinigung München or NKM. Kandinsky, who had formed a friendship with Marc that paralleled Macke's, was the presiding spirit of Blue Rider. As much a shaman as an artist, Kandinsky aimed to promote the "spiritual in art." This appealed to Marc, but Macke was dubious.

Despite his doubts, Macke exhibited work in the 1911 Blue Rider exhibition at the Galerie Thannhauser in Munich along with Marc. By the end of the exhibition, Macke could not restrain himself and wrote to Marc in January 1912:

I have just been thinking that the Blaue Reiter (Blue Rider) does not really represent my work... All those high-sounding words about the birth of a great spiritual moment still resounding in my ears. Kandinsky can air his personal opinion about that or any other revolution he cares to mention. But I dislike the whole thing...Take my advice – work, and don't spend so much time thinking about blue riders or blue horses.

In keeping with Macke's views, the Neue Galerie exhibition does not linger on the Blue Rider exhibitions. Nor does it examine the celebrated companion volume, the Blue Rider Almanac. Published in 1912 with funds provided by Macke's uncle, the industrialist Bernhard Koehler, this seminal book deserves an exhibition entirely devoted to its development and legacy.

Instead, the Neue Galerie exhibition follows the course of the friendship and artistic development of these two amazing artists. Both of them increasingly ventured beyond their "signature" styles into pure abstraction.

The exhibition displays several of the abstract works by Macke and Marc. These remarkable experiments show that both artists faced an impasse prior to exploring the realm of abstraction. Macke's investigations of color and light and Marc's symbolism had both reached the point where they must transcend their favored motifs or watch them atrophy. Pure abstraction represented a path to the future. Both Marc and Macke rose to the challenge. 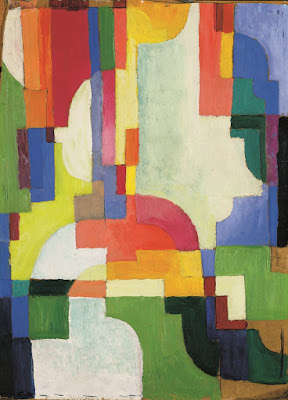 These works are amazingly in "sync" given that the two artists saw little of each other from 1913 onward. This was due to conflicting schedules rather than a falling-out over the Blue Rider exhibitions. Macke was planning a painting trip to Tunisia. The future beckoned.

Neither Marc nor Macke had much future remaining when they painted these abstract works. War was coming and Marc appears to have been aware of the ominous developments. In 1913, he combined abstraction with his earlier symbolism in one of the greatest paintings of modern times, Fate of the Animals. A forest fire consumes Marc's beloved beasts. Paradise is lost again - perhaps forever.


Fate of the Animals is not on view in the Neue Galerie exhibition. Given its iconic status, it is unlikely to ever travel from its home location in Switzerland. Marc painted The Wolves (Balkan War) around the same time and in the same vein. It is a powerful, haunting painting.

Given these two works, Marc should have recoiled from war when it did come in August 1914. Shockingly, he did not. Instead, he volunteered for military service in the belief that war would "cleanse" Europe.

Despite his love of French culture and friendship for Kandinsky, Marc believed in Germany's role as leader of Europe and expected Kaiser Wilhelm's well-drilled army to win. Macke went to war reluctantly, Marc enthusiastically.

It is the word "cleanse" that really casts a shadow on an appraisal of Marc. He certainly did not mean any form of ethnic cleansing. In many ways, he hoped that the war would sweep away ossified political forms in the way that the "Generation of 98" had promoted beneficial change in Spain after that nation was defeated in 1898 by the United States.

The implications of his initial pro-war views were not in keeping with Marc's deep sense of humanity or his genuine spirituality. His wife, Maria, was alarmed by his naive, reckless patriotism and so, after a century, are art lovers like myself who hold Marc in high esteem.

Marc was quickly made aware of his folly. August Macke was killed in action on September 26, 1914. Stunned by Macke's death, Marc wrote, “It is truly the cruelest blow this war could have dealt me; I lost a piece of me when he died.”

One of the most affecting paintings in the Neue Galerie exhibition is Macke's Little Walter's Toys. Painted in 1912, Macke shows the playthings of his young son, who was four years old when his father died. The unused toys have taken on a symbolism that was never intended at the time of the painting.

Little Walter's Toys is a precious relic of the "Lost Generation" of 1914-18, of August Macke, of Franz Marc, of the martyred soldiers of all the warring nations. And it is a reminder of all the little Walters, whose hearts were broken by the War to End All Wars.

Posted by Art Eyewitness at 1:28 PM