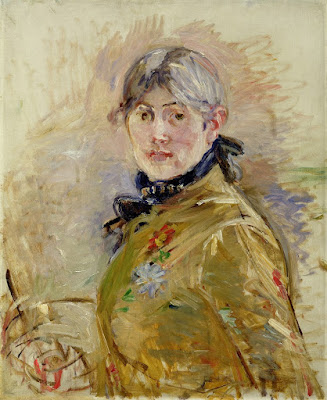 Art criticism is a notably risky business. Albert Wolff, one of the leading critics of nineteenth century France, permanently damaged his reputation by one infamous review. On the pages of Le Figaro in 1876, Wolff denounced the art exhibition of "five or six lunatics, one of whom is a woman."

The "lunatics" were the Impressionist painters and the woman was Berthe Morisot. A splendid exhibition of Morisot's paintings is now on view at the Barnes Foundation in Philadelphia. Berthe Morisot, Woman Impressionist is a joint project of several museums: Musée national des beaux-arts du Québec, the Dallas Museum of Art, and the Musée d'Orsay in Paris - and the Barnes Foundation. 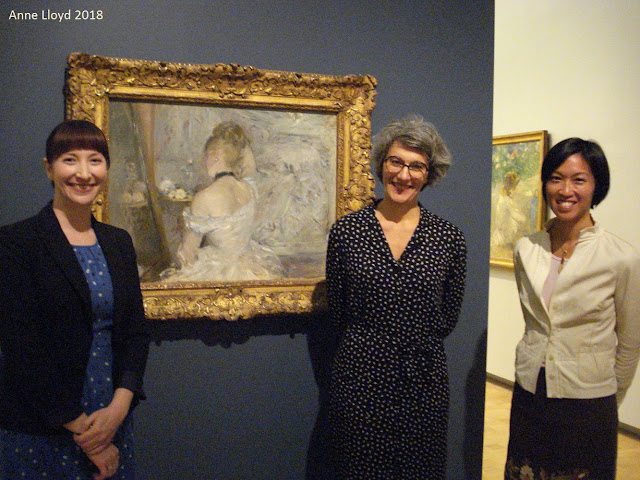 This long-overdue retrospective is brilliantly organized to present Morisot in all aspects of her creative genius: Impressionist, woman artist and pioneer of Modernism.

Albert Wolff, by comparison, is all but forgotten except for his notorious comments. Yet, it is worth "giving the devil his due" and revisit Wolff's article. He was clearly impressed with Morisot and caught something of the emotional forces which impelled her quest for artistic  success.


"There is also a woman in the group, as is the case with all famous gangs," Wolff wrote. "Her name is Berthe Morisot, and she is interesting to behold. In her, feminine grace is preserved amidst the frenzy of a mind in delirium."


"Frenzy" and "delirium" were wide of the mark as descriptors for Berthe Morisot. Yet Wolff intuitively grasped Morisot's artistic zeal. She boldly - if quietly - explored  the limits of objective, observable reality. Berthe Morisot, Woman Impressionist might just as well have been entitled Berthe Morisot, Modern Artist. 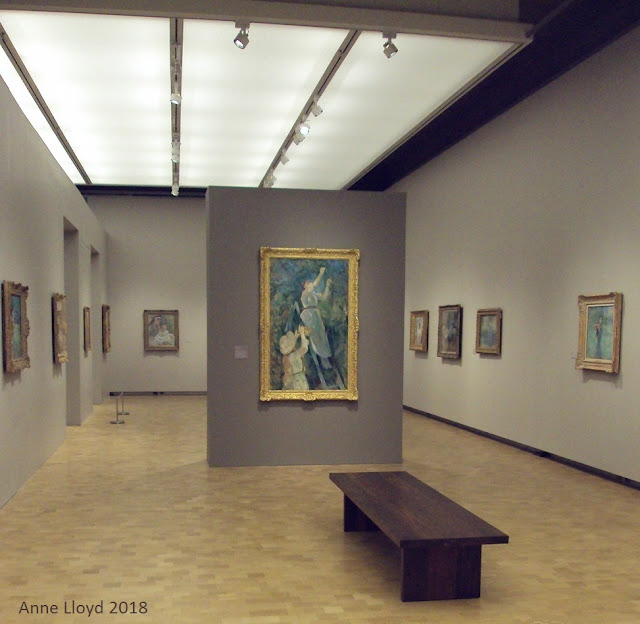 The array of art works on display at the Barnes reveals Morisot to have been one of the most daring and experimental of the Impressionists. Over seventy of Morisot's paintings have been placed on display in this, the first major U.S. exhibition of her work since 1987 and the first in France since 1941!

Berthe Morisot, Woman Impressionist follows the basic chronology of Morisot's life, but is also structured to enable visitors to grasp the themes which preoccupied her as an artist.

The exhibition has much to show about Morisot as a woman and as a woman artist. Many of her paintings take place in "threshold" places, windows, balconies, doorways and verandas. The women and girls are poised to go beyond the home boundaries in these paintings, just as women in the the late 1800's began the campaign for female suffrage and a role in the male-dominated professions. 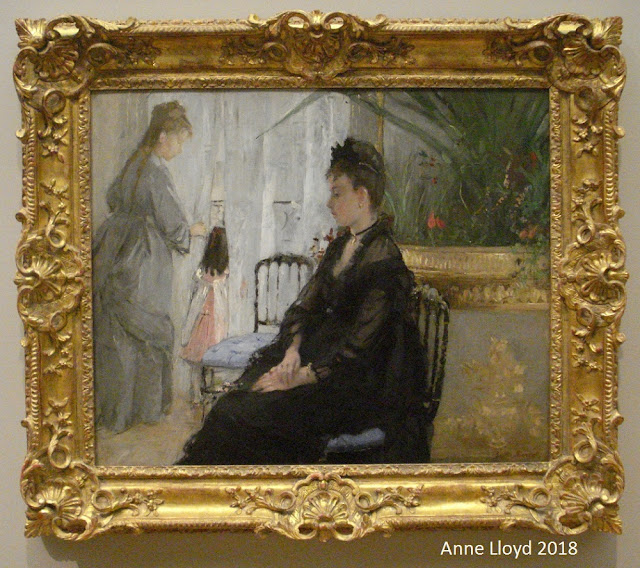 Many of Morisot's female protagonists seem pensive and melancholy, as if aware of the emotional price to be paid for reaching beyond the age-old confines of a "woman's" role. The aptly-named Interior, painted in 1872, is a notable example of the theme of Morisot and the modern woman on the threshold.

Some of Morisot's concerns, such as the need to document women as members of the work force or engaged in domestic chores, need to be interpreted in the light the nascent feminism of the nineteenth century.

Morisot, especially early in her career, "appears" to remain focused on the traditional social duties of women, motherhood and "keeping up appearances." Yet appearances were deceiving. There was so much more to Morisot's artistic vision, in contradiction to what was expected of a woman artist. 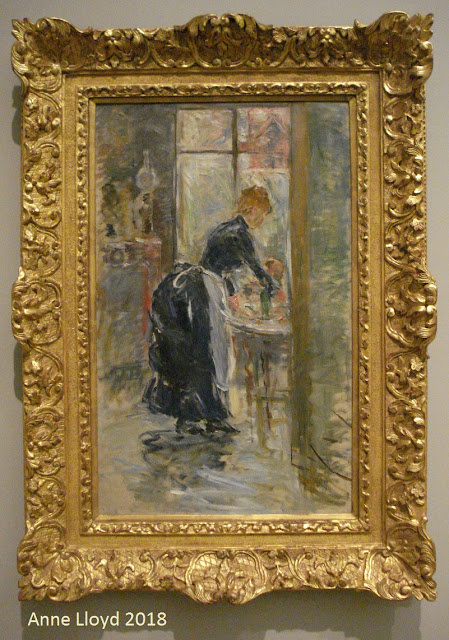 By the time Morisot died, aged 54, in 1895, she had erased almost all details of the fashionable world from her paintings. Clothing styles, ornamentation, the surrounding milieu vanished, with only the human essence of her sitters remaining on the canvas.

This is not a posthumous twenty-first century assessment, no revisionist recalibration of her Impressionist achievement. Morisot's fellow Impressionists - Renoir particularly - were in awe of her talent. And so were critics not blinded by prejudice or male vanity.

"No one represents impressionism with a more refined talent and more authority than Mme Morisot," Gustave Geoffroy wrote in 1881.

Berthe Morisot began her career in the company of her elder sister, Edma (1839-1921). Both young women were extremely talented and were supported by their parents in their artistic ambitions. This consideration, exceptional for a family of the haute bourgeoisie, was predicated on eventual marriage for their daughters.

That is exactly what destiny had in store for Edma. She and Berthe studied with a private art tutor and briefly with Corot. Edma's 1865 portrait of Berthe demonstrated both her skill and traditionalist oeuvre. Had she continued with her art, Edma would likely have to follow Corot's lead. In 1869, however, Edma married a naval officer in 1869 and abandoned plans for an artistic career. 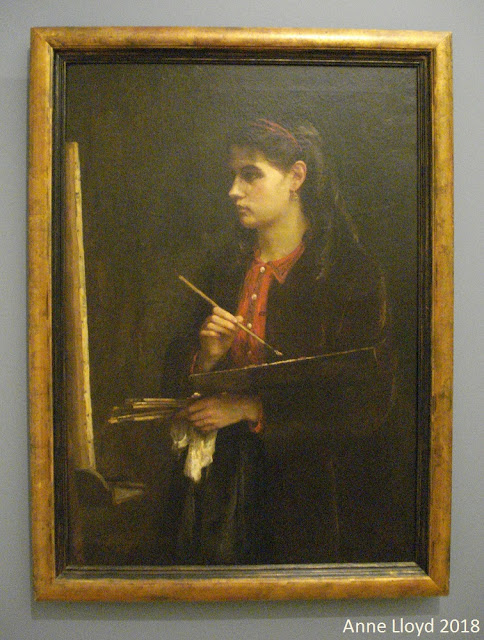 For Berthe, Edma's portrait represented the road not taken. From the start, as Corot realized, Berthe was a more restless spirit. But why did she join the fledgling Impressionist movement?

Thanks to family connections, Berthe Morisot was introduced to a wide circle of rising artists. Her meeting with Édouard Manet was obviously of crucial importance. Manet painted Morisot several times and his elan in pressing forward with his unique vision of art served an an example for her own efforts. But Manet did little in practical terms to encourage Morisot professionally.

Morisot was also close to the Symbolist painter, Pierre Puvis de Chavannes (1824–1898).  who warned her against challenging the art establishment of France. Yet she did not heed his advice nor was she influenced by his allegorical style.

Instead, Morisot surveyed the work of rising artists and found her inspiration in a key work by Frédéric Bazille (1841-1870), View of the Village, 1868. This work, one of the masterpieces of early Impressionism, was featured in a recent National Gallery exhibition on Bazille.

Morisot was fond of the tall, generous painter from southern France. "Big" Bazille, as she called him, painted a simple, naturalistic depiction of a young girl sitting on a hill overlooking a valley near his home in Montpellier. What sounds like a banal, unremarkable work was actually a perfect example of a "figure en plein air.”

Morisot was tremendously impressed with View of the Village. Bazille explored the psychological depths of an "ordinary" person in the setting of her daily life. Morisot responded with several similar paintings set in coastal towns of Brittany. But Morisot did not hit her stride with plein air works until after Bazille's death in the Franco-Prussian War. 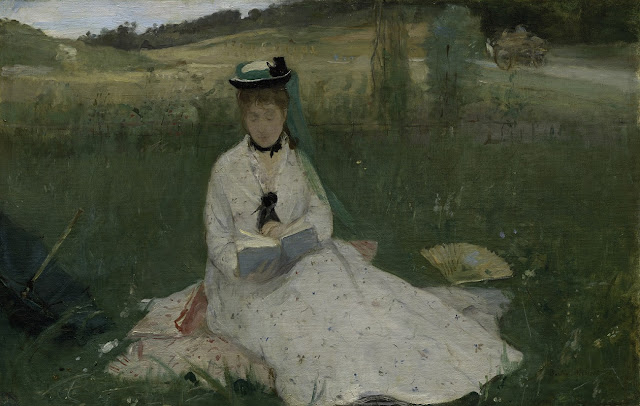 Two  en plein air paintings by Morisot exemplify how she responded to the inspiration she found in Bazille's View of the Village. Her sister Edma appears in Reading (1873) and again, with her young daughter Jeanne, in Hide and Seek, also painted the same year. These are deceptively simple works, each with subtle touches which note the brevity and preciousness of time.

While Edma is perfectly at ease - or appears to be - with her book, a farm cart trundles by in the distance. This work-a-day image, like the numerous factory smoke stacks which appear in  many Impressionist paintings, reminds the viewer that labor does not cease, even when we pause to relax. 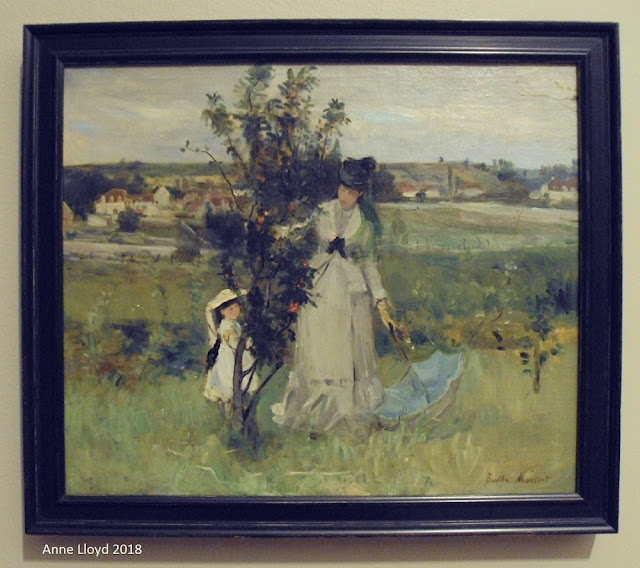 
Nor does time stand still - though many would think so from a superficial reading  of Impressionist painting, including works by Morisot. In Hide and Seek, mother and child playfully romp around a sapling tree which will grow, bear fruit and, in time, wither with age. So will young Jeanne. So do all human beings.

The date of these paintings is hugely significant, 1873, the year before the first Impressionist salon. Morisot played an important role in this pivotal event. She did so, however, as mature, fully-formed artist rather than as an acolyte to an established master. Indeed, one may say that she responded to Bazille's work because he embraced spontaneity and personal inclination.

"Every day I pray that the Good Lord will make me like a child," Morisot wrote."That is to say, that He will make me see nature and render it the way a child would, without preconceptions."

Morisot brought no "preconceptions" to the first Impressionist Salon of 1874. She did bring outstanding examples of her creativity, including Hide and Seek and her most famous painting, The Cradle. 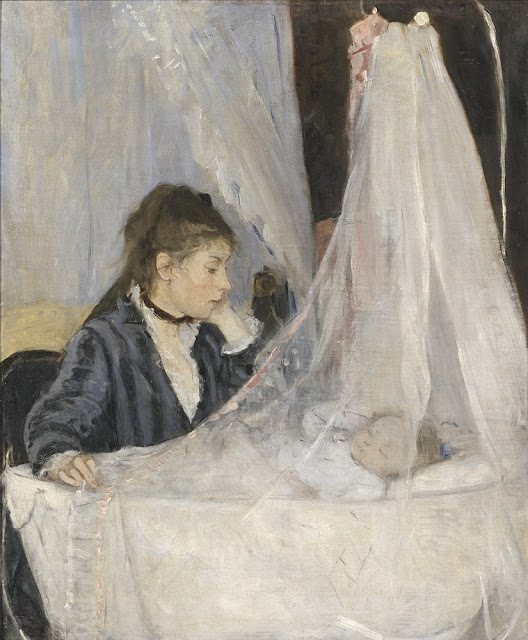 Morisot's The Cradle is a tremendously accomplished and appealing work. It recalls the sensitive portraits of young women painted by her teacher, Corot, which are currently on view in an excellent exhibition at the National Gallery in Washington D.C. The painting's theme, motherhood, was one of the traditional standards of Western art, the modeling of the figure was superb (note the exquisite treatment of the fingers holding the veil) and the delicate tracing of the sleeping infant's eyelids is just short of miraculous.

Despite this litany of superlatives, The Cradle did not sell at the Impressionist Salon of 1874. It was Morisot's lot to struggle, just as her male Impressionist colleagues did. 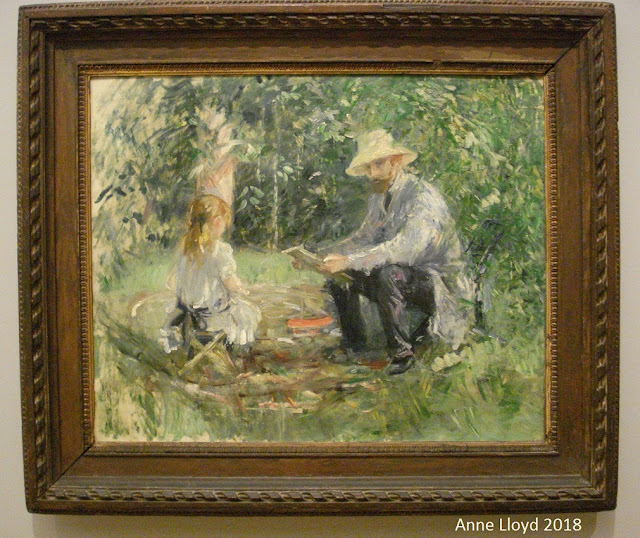 
Thanks to the emotional support of her husband, Eugene Manet, brother of Édouard, and family financial resources, Morisot never had to fear bill collectors. Yet she faced ceaseless frustration, much of it due to her own exacting standards. Morisot referred to her dissatisfaction with her work as my "mania for lamentation."

As for her personal character, it is well known that it was rare and reserved; distinction was of her essence; she could be unaffectedly and dangerously silent and create without knowing it a baffling distance between herself and all who approached her, unless they were among the first artists of her time.

Morisot resolved her "mania" through experimentation. Over and over again in the exhibition were see brush strokes and paint-handling on one canvas, so different from a nearby work that we would have to assume that it was by a different artist. 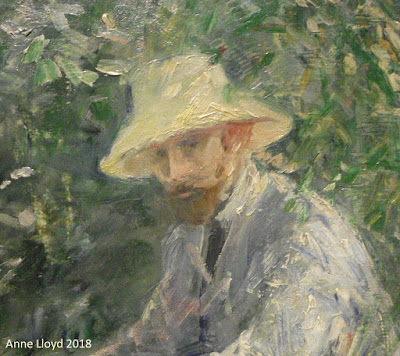 In the portrait of her husband and daughter sitting in the garden, Morisot used countless flecks of color. John Constable had used the same technique, half a century earlier, to the incredulity of critics who derided it as "snow." Morisot and Constable both appreciated this approach to capturing the effect of reflected light - and so will you when you study this amazing painting and similar works at the Barnes. 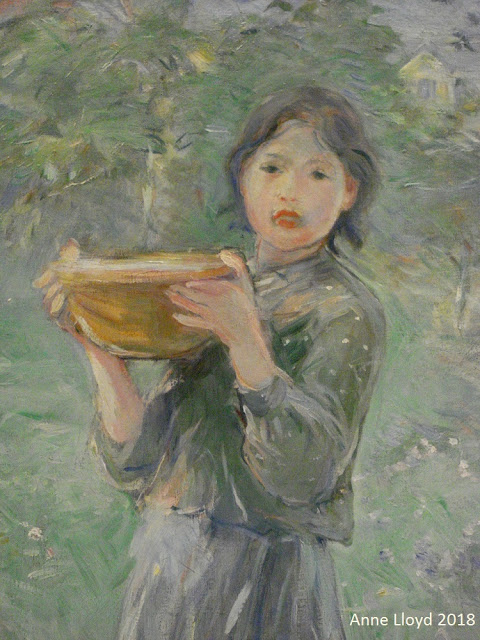 By contrast, Morisot utilized flowing, liquid brush strokes in her depictions of women and children at work. Quite a number of the works on view in the Barnes exhibit are from private collections and one, showing a little farm girl carrying a bowl of milk, beautifully reveals Morisot's painterly treatment of bodies in motion.

Later in career, Morisot painted on pieces of unprimed canvas. Édouard Manet had done so earlier and Morisot borrowed this radical innovation, using it to brilliant effect. She placed bold, "sketchy"  strokes to give the elemental form or framework or her subject and them concentrated on the essentials, as in the face of the sitter in Young Girl with a Vase. This astonishing work is another of the private collection loans which make Berthe Morisot, Woman Impressionist a tour de force exhibition. 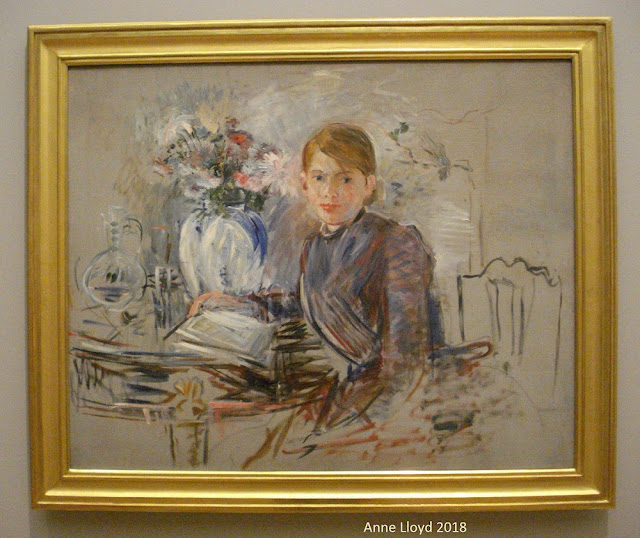 Morisot exhibited in seven of the eight Impressionist Salons. In his review of the final exhibition in 1886, the critic Jean Ajalbet noted the radical manner in which Morisot had reduced all externals to what was crucial in understanding her subject.


“She eliminates cumbersome epithets and heavy adverbs in her terse sentence,"  Ajalbert wrote of Morisot's daring simplicity. "Everything is subject and verb."

Ajalbert's brilliant assessment was absolutely correct and the evidence to justify his assertion is evident in every work on view in the outstanding exhibition now at the Barnes Foundation.

Berthe Morisot, no less than Manet, Degas, Cezanne and the rest of the Impressionist "lunatics", made a vital, unique contribution to creating the language of Modern Art.

Posted by Art Eyewitness at 9:29 PM