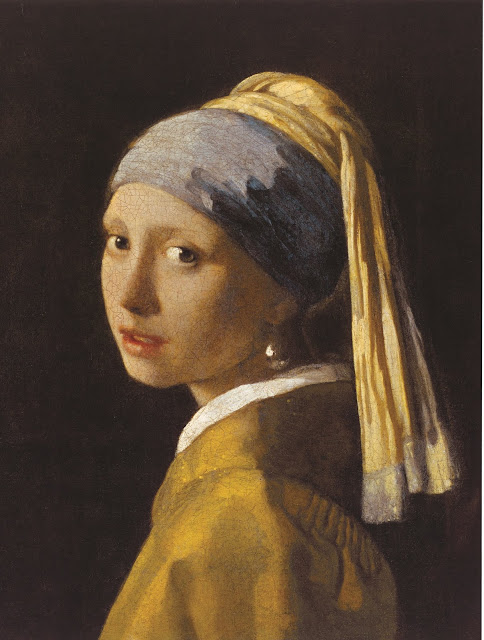 A New Way of Seeing: The History of Art in 57 Works

Book titles proclaiming the word "new" make me a bit apprehensive. "A New History." "A New Biography." "A New Vision." A new this, a new that.

Most of the time, these "new" books have very little that is trail-blazing, novel or inventive about them. Most are like the leftovers from yesterday's dinner, warmed-up with a dash or pepper or curry to make them taste differently.

Kelly Grovier's  A New Way of Seeing: the History of Art in 57 Works is NOT a rehash of museum favorites. Many of the masterpieces under discussion are indeed works you've seen a hundred times before. Grovier, however, approaches each from an unusual, almost subversive vantage point.  A "new" view is what is promised in this book and that is what is delivered. 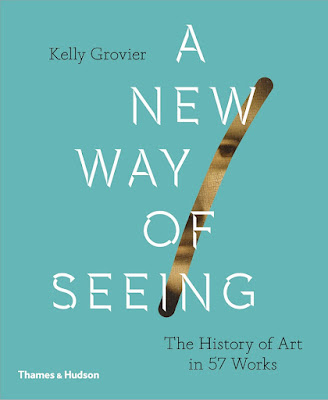 Grovier's fresh insights come by way of what he calls "eye-hooks."

These eye-hooks are not the metallic kind that you screw into window frames in order to hang Christmas lights. For Grovier, an eye-hook is a "single detail, quality or feature" of an art work which engages the perception of the viewer. Once "hooked," we are enabled to understand the artist's meaning and to come to terms with the "strangeness" of art.

Grovier emphasizes the "strangeness" of art, quoting the late Robert Hughes in his classic book, The Shock of the New. The word is well-chosen. Art really is strange when you come to think of it, splashes of pigment bound by linseed oil on a piece of canvas or wood. Yet, these marks on a flat surface can move us to tears (of joy or sadness) and propel our thoughts to higher realities. And it is the eye-hook which snags us and reels us in for a journey of heart, soul and mind.

This theory is verified by fifty-seven examples of eye-hooks in action. Some are obvious, some obscure. Let's test Grovier's "new" way of seeing by focusing on the eye-hooks of two masterpieces from the seventeenth century.

In Vermeer's Girl with a Pearl Earring, the lustrous ornament practically reaches out from the picture to grab our attention. It is a really big pearl, bigger in fact than first appears. Initially, we see only the glint of light on its surface. Our eyes have to adjust to appreciate its size. It's a whopper. 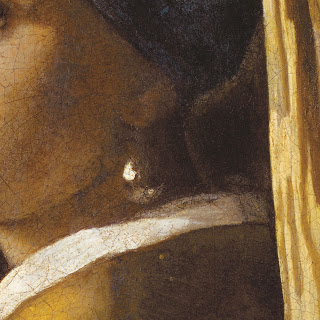 Johannes Vermeer, Detail of the earring in Girl with a Pearl Earring, 1665

The pearl earring is so big that there should be at least a hint of a thread visible, showing how it dangles from the girl's ear lobe.  Yet, there is none to be seen. In Grovier's view, the earring "levitates," becoming a magical token or talisman of life's enduring mystery.

Put simply, Vermeer didn't paint a pearl. He told our brains to go and fetch one for ourselves. That kind of visual dictation has the effect of transforming the canvas into a kind of stenography where generic gestures and simple markings no longer aspire to mimic the way the physical world actually looks, but rather to tease the imagination into creating in the mind's eye a more vibrant image than any brush can forge.

If Vermeer's pearl earring is an obvious eye-hook, its counterpart in Las Meninas is almost impossible to guess. Put to the test, I would have picked a different eye-hook, the mirror which reflects the faces of the parents of the princess, King Phillip IV of Spain and Queen Mariana. The princess or infanta is being groomed in the image of royalty.

That may be a plausible theory, but the crafty Diego Velázquez (1599-1660) placed a different eye-hook smack in the center of his masterpiece. Hidden in plain sight is a red earthenware jug being offered to the five-year old Infanta, Margaret Theresa, by one of the maids-of-honor. The small jug was called a búcaro. Fragrant spices were mixed with the clay before the jug was placed in the kiln to be fired. Later, these spices would flavor the water poured into it. 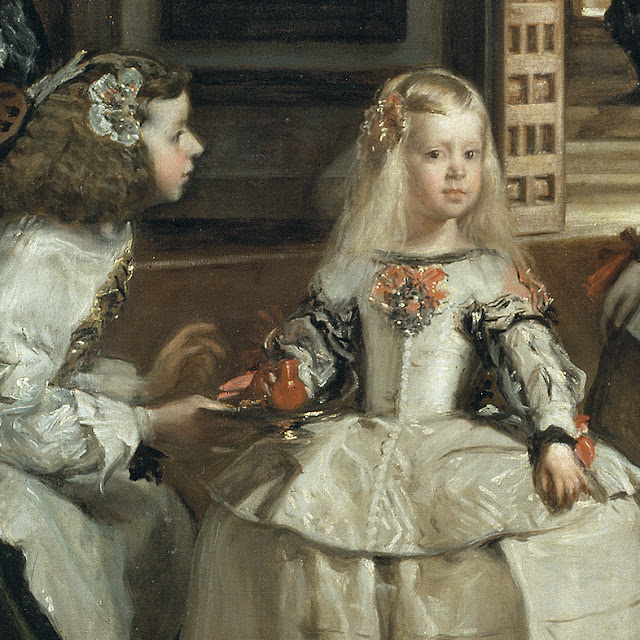 How can we be sure that the búcaro is indeed the "eye-hook" in Las Meninas? Grovier's sharp eye noticed that the tip of Velázquez' paintbrush bears a dab of the same reddish brown color as the jug. That leads us to a second question. Why all the fuss over a little earthenware jug?

In a brilliant piece of detective work, Grovier discovered that the búcaro figured in a bizarre social custom. Instead of merely sipping the scented water from the jug, Spanish women nibbled the rim of the fired clay. This act of geophagy or "earth eating" was said to lighten the complexion. Grovier takes a different tack, quoting the poet, Lope de Vega, as evidence that chewing on the búcaro and ingesting the clay produced a hallucinogenic, "floaty" feeling.

Was Velázquez trying to replicate this mind-altering state with the composition of Las Meninas? Grovier thinks so:

Like a bottle containing a genie, the búcaro is the locus around which the hazy hubbub of Las Meninas spins - a woozying scene of making and unmaking, of reality and reflections, comings and goings, whispers and shadows.

From these quotes, Grovier's writing skill is evident. He is an accomplished poet, as well as an art historian and editor of a literary journal devoted to nineteenth century Romanticism. Grovier's survey of contemporary art, Art since 1989, for the Thames and Hudson's World of Art series, was very impressive, leading me to have high expectations for this new book. I was not disappointed.

As noted, Grovier selected art works for consideration which are familiar for the most part, occasionally a bit too familiar. Over-all, this was a sensible selection criteria, providing new insights on works of art we mistakenly assumed had been analysed to the point of redundancy. 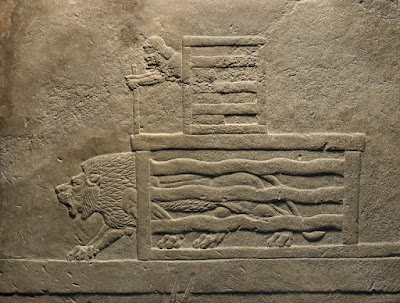 Detail from the relief, Ashurbanipal Hunting Lions, 645-635 BC

I was delighted to see how Grovier skewered the blood-thirsty lion killing of the Assyrians, c. 645 BC. His eye-hook is a bas relief which shows a servant opening a cage to release a lion to be slaughtered in safety. No need to risk the hazards of actually hunting lions in the desert when you can kill them in comfort! Thus, the pretensions of the high and mighty Assyrians were punctured by the artist, who was likely a slave or hostage, and the irony escaped them!

The other eye-hooks are well-chosen, too, and Grovier generally proves his conclusions. 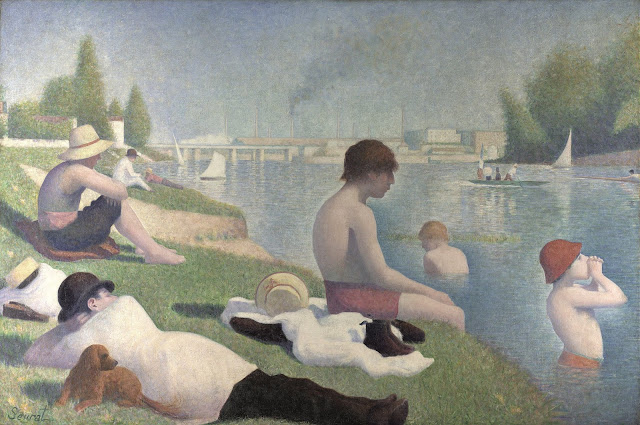 In the case of Georges Seurat's Bathers at Asnières,1884, by focusing on the factory smokestacks in the background, Grovier makes a very valid point about Impressionism. The more you study the paintings of the Impressionists or post-Impressionists, in the case of Seurat, the more you see smoke-belching railroad locomotives and industrial furnaces off in the distance. 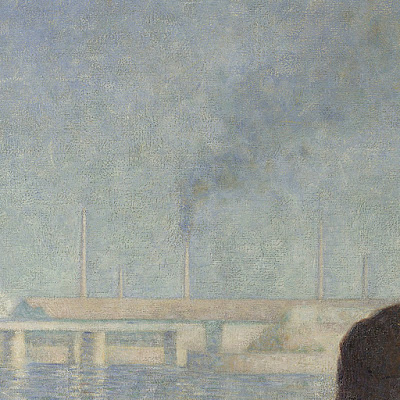 Detail of Bathers at Asnières, 1884

Impressionism was art made in reaction to the Industrial Revolution. The bathers in Seurat's early masterpiece were mill hands, taking a Sunday dip in the river polluted by the factories where they worked the other six days of the week.

Grovier's conclusions about the 230 ft. long embroidery depicting the Norman conquest of Anglo-Saxon England in 1066 are a matter of dispute. This could hardly be different as the Bayeux Tapestry is one of history's most mysterious works of art.

Grovier follows the conventional script that William the Conqueror's half-brother, Bishop Odo of Bayeux, commissioned the vast medieval panorama. Odo took part in the Battle of Hastings, wielding a mace since clergymen were prohibited from using swords. The combative bishop appears riding a black stallion in the extreme right-hand of the scene from the Bayeux Tapestry below.

More recent scholarship contends that Count Eustace II of Boulogne was the patron of the work. Eustace had quarreled with Odo, a most unpleasant man like his half-brother, after the conquest. The tapestry was intended both as a peace-offering and as a reminder of the crucial role which Eustace had played in the Norman invasion of England. If this theory is true, then the intended eye-hook would have been the very prominent depiction of Eustace astride his warhorse, riding alongside Duke William at Hastings.

Instead, Grovier selected as his eye-hook the scene of the death of England's King Harold during the battle. Clutching an arrow in his eye, Harold falls and Anglo-Saxon England falls with him. 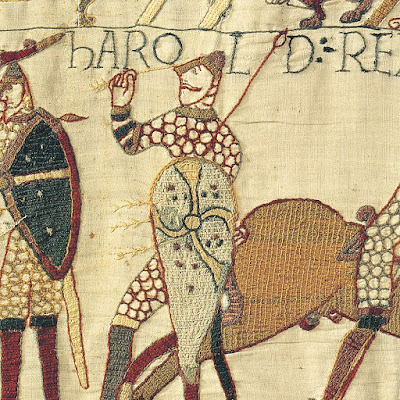 Detail of King Harold with an arrow in his eye, Bayeux Tapestry, c. 1077

Close scrutiny of the embroidery has convinced many scholars that the Bayeux Tapestry was made by English needle-women, who were renowned for their skill during the Middle Ages. Could it be that the nobility of Harold, as he dies defending his homeland, was a subtle tribute by these English women for their hero king? If so Count Eustace and Bishop Odo, like the Assyrians with the lion hunt bas relief, missed the point.

Kelly Grovier, however, never misses a beat in this compelling book. His scholarship is authoritative and the caliber of his writing is first rate. Most notably, A New Way of Seeing helps the reader do exactly what the title promises, while enabling us to understand how the artists felt, believed  and saw at the time when these mighty works of art were created. 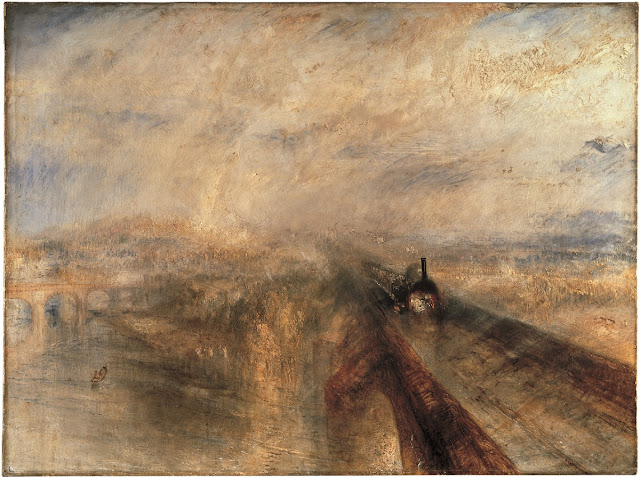 When we look at J.M.W. Turner's Rain, Steam, and Speed, we can grasp - without too much difficulty - the symbolical status of Turner's painting for the Industrial Revolution. Grovier's brilliant commentary on this iconic work enables us to appreciate how Turner, born in 1775, felt as the steam engine of change came rushing at him, full-blast.

Turrner placed a tiny, almost imperceptible, rabbit on the tracks, desperately racing for safety. With a couple of dabs of his paint brush, Turner illustrated the modern condition, a new way of looking at a world in constant flux. 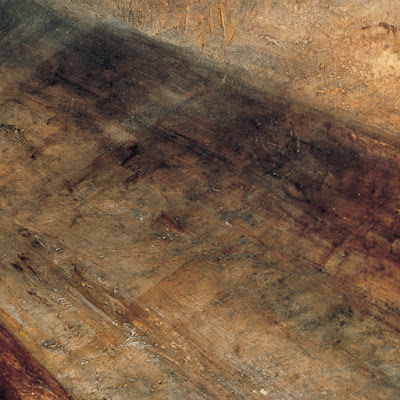 Detail of Rain, Steam, and Speed – The Great Western Railway, 1844

With his perceptive "eye-hooks" and poetic commentary, that is what Kelly Grovier does too.

All images courtesy of Thames & Hudson. The picture of the opening of the lions' pen, 645-635 BC. from the relief, Ashurbanipal Hunting Lions, is courtesy of The British Museum's website.

Detail of the earring in Girl with a Pearl Earring.  Mauritshuis, The Hague

Detail of the opening of the lions' pen, 645-635 BC. From the relief, Ashurbanipal Hunting Lions. Courtesy of The British Museum, London


Detail of the factory chimney in the background of Bathers at Asnières, 1884. National Gallery, London