Renaissance Masterpiece by Pontormo at The Getty Center 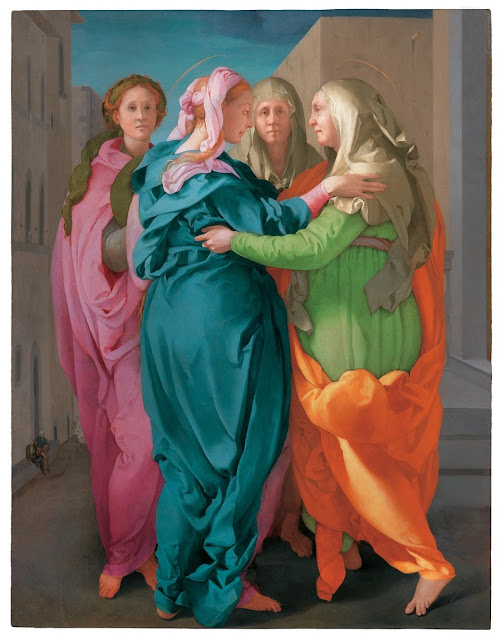 William Blake had the habit of writing comments in his copy of Sir Joshua Reynolds' Discourses on Art (1798). Usually these remarks expressed his indignant disapproval of the great English portrait painter and president of the Royal Academy. But there were occasional pearls of wisdom in Blake's marginalia. In one of his rebukes of Sir Joshua's view of art history, Blake wrote:

Ages are all equal. But Genius is Always Above The Age.

Blake never visited Italy, though he was familiar with Michelangelo's Sistine Chapel frescoes through engravings. Thus, the visionary British artist never was able to appreciate art from the "age" which followed Michelangelo's great achievements or to study art by a "genius" who was in some ways a forebear of his own prophetic work.

The Italian Renaissance artist, in question, was Jacopo Pontormo (1494–1557). We are more fortunate than Blake because one of Pontormo's  greatest works, The Visitation, is the centerpiece of an exhibition which just opened at the Getty Museum in Malibu, California. This is the final stop for the exhibition which debuted at the Uffizi Galleries in Florence in the spring of 2018.

I saw the exhibit at the Morgan Library and Museum in New York last fall. It was a rare privilege to behold a masterpiece never before displayed in the United States. 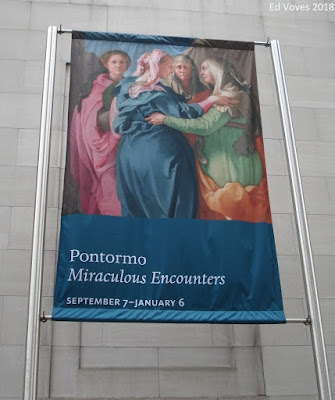 Languishing under the long shadow of Michelangelo, Pontormo was a Florentine painter of talent and intelligence. He suffered the further disadvantage of being an innovator of the controversial artistic techniques known as Maniera or Mannerism. Later art critics dismissed Mannerism as a pastiche of gimmicks, mind games and coy sensuality. A typical example of such denigration was made by Emilio Cecchi in 1956:

Jacopo Pontormo was probably the greatest exponent of that group of esthetic heretics we call Mannerists, each of whom officiated with a ritual of his own.

Instead of being hailed as a successor to Leonardo and Michelangelo, Pontormo's reputation was in decline even before he died. As we shall see, the unveiling of The Visitation coincided with dramatic shifts in the political scene in Italy. In this new age, skilled courtiers were as much in demand as creators of genius.

This profoundly moving painting has recently been restored to its original glory after earlier, botched, attempts at conservation. The Visitation's American tour will hopefully lead to a reassessment of Pontormo and the era of Mannerism.

Pontormo's The Visitation was painted around 1528-1529. It has long been displayed in the Church of San Michele in Carmignano, a village near Florence.

Prior to creating this remarkable work, Pontormo had painted two earlier versions of the Visitation. One was a smaller oil on panel showing just two figures embracing, set against a darkened background. This was painted in 1514 and may have been a working model for the the full-scale fresco of the Visitation which he painted between 1514 to 1516 for a chapel in Florence. The fresco version is a magnificent work but very much in the tradition of Florentine painting stretching back to the 1400's. The Visitation of 1528-29, painted on wood panels, would be a very different - and revolutionary - work of art! 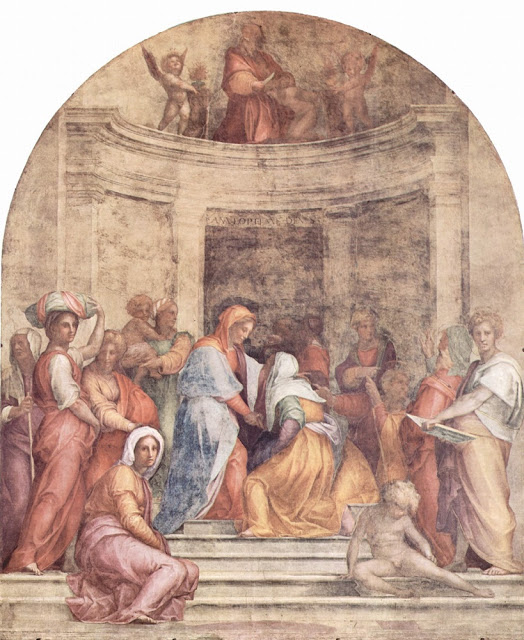 Pontormo had been trained in drawing or disegno by one of the masters of the trade, Andrea del Sarto. As befitted a Florentine artist of his era, Pontormo prepared a meticulous preparatory sketch for The Visitation of 1528. Amazingly, this drawing, which appears below, has survived.

For the first time ever, the first-draft and finished painting are united in an exhibition, enabling us to chart the changes in design which Pontormo made. It is noteworthy that the ancient column, appearing in the drawing, did not make the final version. Classical motifs, of any kind were discarded in the 1528-29 oil in favor of an intense, almost prison-like setting, which contributes to an overwhelming sense of  immediacy. 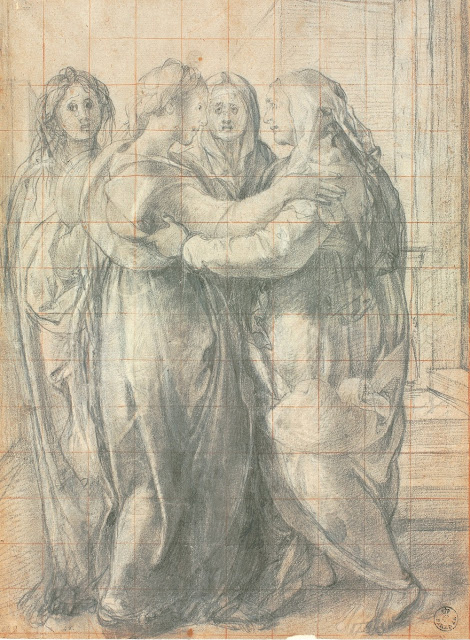 This oil painting on wood panels was created during a dark time in Italian history. Rome had just been brutally sacked by mercenaries of Emperor Charles V in 1527. The Republic of Florence was being threatened by the Medici, intent on restoring their rule, which indeed they did. Artillery bombardment, famine and plague brought the proud city to its knees in 1530 after a lengthy siege.

The Visitation  of 1528 is notable for the contrast of bright, unusual colors, the movement and interplay of draped bodies and unnerving, psychological insight. This was not the first time that Pontormo had exhibited his mastery of unconventional art techniques. And it was not the first time that he had painted this episode from Christian history.

The dazzling (verging on discordant) color scheme had featured in Pontormo's The Deposition from the Cross, painted shortly before he commenced work on The Visitation. But the chief point of similarity between The Deposition and The Visitation is the way that Pontormo uses the eyes of protagonists to draw viewers of the paintings into the action taking place. The beseeching eyes of the young men (possibly angels) carrying Christ's body in The Deposition and the transfixing stare of the two mysterious figures In The Visitation engage us to such an extraordinary extent that we become actors in the dramatic events recorded in "holy writ."

This is not a subjective interpretation of these works. Every aspect of Pontormo's paintings - color scheme, structural positioning, disregard of the rules of perspective - point to his intention to create an emotional event NOW rather than a depiction of THEN.

The Deposition reinforces this direct, personal invitation from Pontormo to join the ranks of the Christian faithful. He included his own face among the group of the devout, grieving disciples. Like the young men bearing Christ's body, Pontormo looks directly at the viewer, appealing to his or her belief. A preparatory sketch of this self-portrait is on view among the supporting art works in Miraculous Encounters. 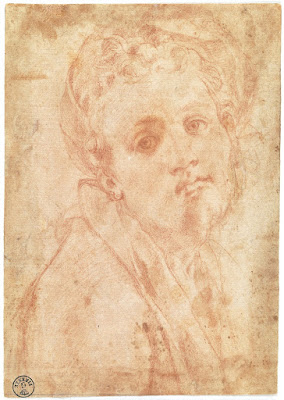 The event which Pontormo's painting of the embracing women celebrates is one of the most significant in Christian sacred history. The Visitation has psychological implications which extend across the course of Western art, as I noted in an earlier Art Witness essay.

In the Gospel of St. Luke (Chapter 1, verses 39-56), we read how Mary, pregnant with Jesus, has gone to visit her older cousin, Elizabeth. Against all expectations, Elizabeth is too expecting a child, the future St. John the Baptist. When she sees Mary, Elizabeth realizes that her younger cousin will give birth to the Messiah. Elizabeth becomes the first person to identify Jesus as redeemer of all humanity.

And it came to pass, that when Elizabeth heard the salutation of Mary, the infant leaped in her womb. And Elizabeth was filled with the Holy Ghost:  And she cried out with a loud voice, and said: Blessed art thou among women, and blessed is the fruit of thy womb

This glorious, hopeful event in sacred history reflected the mood of opinion in Florence at the time The Visitation was being painted. In 1527, the Florentines reasserted Republican rule, driving out the Medici faction. The vibrant, eye-catching colors reflected this upsurge of democratic feeling, although it should also be noted that Pontormo's patrons for this particular work were members of the Pinadori merchant family, whose specialty products included painting pigments.

Thanks to the magnificent restoration work by Daniele Rossi, we can properly appreciate the sheer brilliance of Pontormo's color scheme for the first time in centuries. Pontormo's palette matched the emotions of the Florentine citizens under the restored Republic. 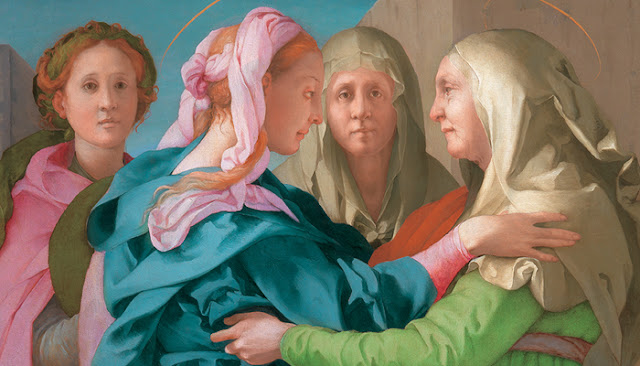 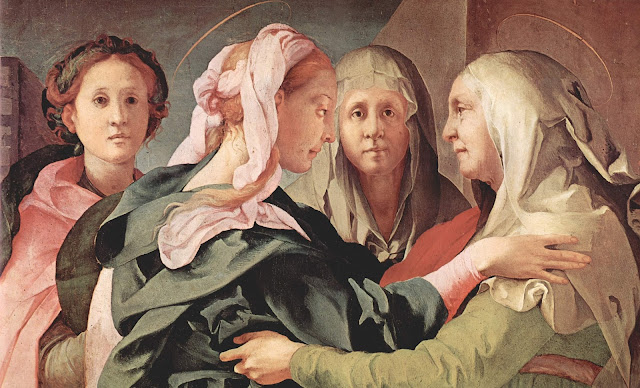 Jacopo Pontormo, Detail of The Visitation, after (top) & prior to restoration in 2013

In a master stroke of psychological insight, Pontormo placed surrogates or "body-doubles"" of Mary and Elizabeth, directly facing us. Their faces are blank canvases, waiting for our response to determine their expression. They are questioning the viewer - Pontormo, us - before they reveal their feelings.

What was Pontormo, a sensitive and intelligent citizen of Florence, thinking as he painted this magnificent work? Surely, he was aware of the daunting odds facing the Republic of Florence in its confrontation with the Medici, who enjoyed the military support of Emperor Charles V.

Pontormo's The Visitation can be interpreted in many ways, but the haunted thoughts and fears which cloud the mind of humanity is surely one of its major themes.

Ironically, it was the pre-restoration Visitation, tinged with candle smoke and suffocated by layers of varnish, that most accurately reflected the somber emotional atmosphere of Italy following the Medici's crushing of democracy in Florence in 1530.

Revolutions, especially cultural ones, cannot be reversed. The printing press could not be "uninvented." The voyages of Columbus and Magellan had proven the ancient Greek theory that the earth was round. The globe could not be pressed flat. If the Renaissance cruelly disappointed hopes for political and religious reform, individualism and independent thought could not be suppressed.

Pontormo was one of the greatest portrait painters of the 1500's. He brought the kind of psychological probing and sense of immediacy which we see in The Visitation to his portraits. 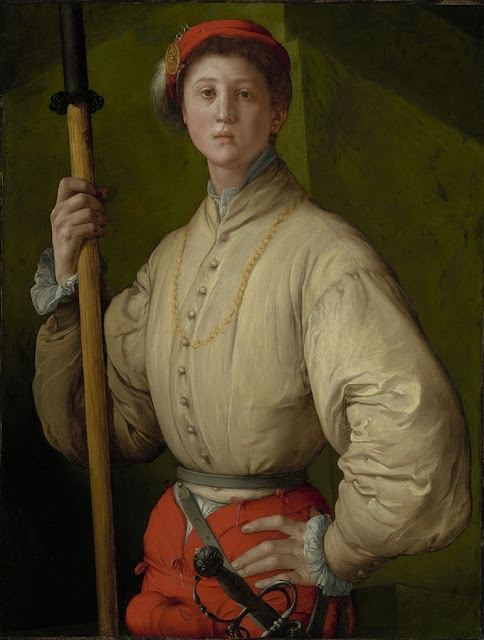 Two of Pontormo's portraits complement The Visitation in Miraculous Encounters at the Getty.  One of these is the Getty's own Portrait of a Halberdier. This is one of the signature Old Masters in the Getty collection. The well-armed protagonist of this painting has been identified by many scholars as Francesco Guardi, though some questions remain. 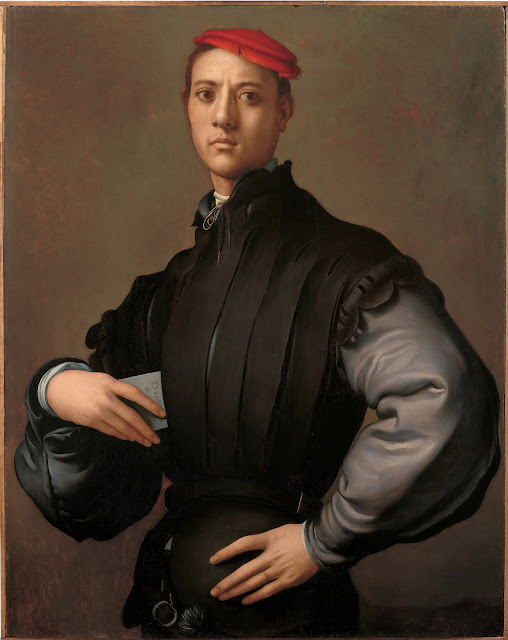 The other portrait, which was also on display at the Morgan, is believed to be the Florentine cavalier, Carlo Neroni. Like Portrait of a Halberdier, it was painted very close in time to The Visitation and the subsequent siege and fall of Florence. Together, these are portraits of the "lost generation" of the Italian Renaissance.

These young patriots, men of conviction, were not destined to secure victory for the Republic of  Florence. Political independence was crushed throughout Italy. The light of liberty was not to be rekindled until the 1860's by Garibaldi.

Fate was unkind to Jacopo Pontormo, as well. He spent much of his later life working on a fresco cycle for the main chapel and choir of the Basilica of San Lorenzo in Florence. It was a vast work, dealing with complicated theological themes much like the later work of Michelangelo. Pontormo died before finishing the fresco. It did not find favor with the ruling Medici, though it was completed by Pontormo's assistant, Agnolo Bronzino. The frescoes were painted over during the 1700's, a victim of the low opinion of Pontormo and Mannerism which would not be reversed until the twentieth century.

To return to William Blake's reflections, not all of the "ages" of art history are equal. Some artists of genius are held in low repute, their works gathering dust in museum store rooms. This is especially true of artists like Pontormo whose protagonists stare us down from the wood panels or pieces of canvas on which they are painted, challenging our preconceptions.

Truth will emerge from the shadows. It always does, though in Pontormo's case it took a long time to happen. But thanks to the splendid exhibit now at the Getty, we are able to have a "miraculous encounter" with this Renaissance Man whose true genius we are only now beginning to appreciate.

Jacopo Pontormo (Italian, 1494–1557) The Visitation, 1528-1529 (Detail of painting following the restoration by Daniele Rossi in 2013).  Full credits appear above for the introductory image.

Posted by Art Eyewitness at 2:02 PM