Gainsborough's Family Album at the Princeton Museum of Art 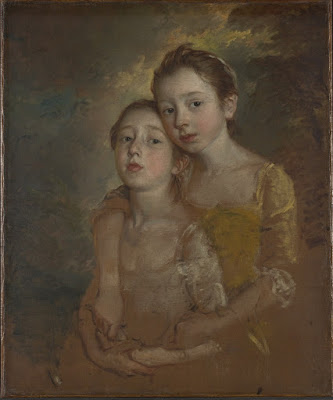 In June of 1787, the British painter Thomas Gainsborough was staggered by the death of Carl Friedrich Abel. A noted composer and master player of the viola da gamba, Abel had been one on the music-loving painter's greatest friends. In a letter to Rev. Henry Bate-Dudley, Gainsborough wrote:

We love a genius for what he leaves and we mourn him for what he takes away... For my part I shall never cease looking up to heaven - the little while I have to stay behind - in hopes of getting one more glance of the man I loved from the moment I heard him touch the string.

Visitors to the superb exhibition, Gainsborough's Family Album, now at the Princeton University Museum of Art, will likely extend these moving words to Gainsborough himself.

Gainsborough's Family Album presents forty-four works by Gainsborough - all dealing with the subject of family: Gainsborough's family. The theme is hugely significant because Gainsborough painted his wife and daughters, siblings, niece, nephew and in-laws at exactly the moment when the concept of the modern family was taking shape.

Earlier in history, family units were more extended and communal in nature. That of course is a broad generalization but the eighteenth century definitely saw a shift to more focused units of familial affection. Thomas Gainsborough's family, as the Princeton exhibition shows, was at the epicenter of this development, Great Britain during the reign of a noted family man, King George III.

The facts of Gainsborough's life are essential to understanding the Princeton Museum exhibition and the greater story it tells. 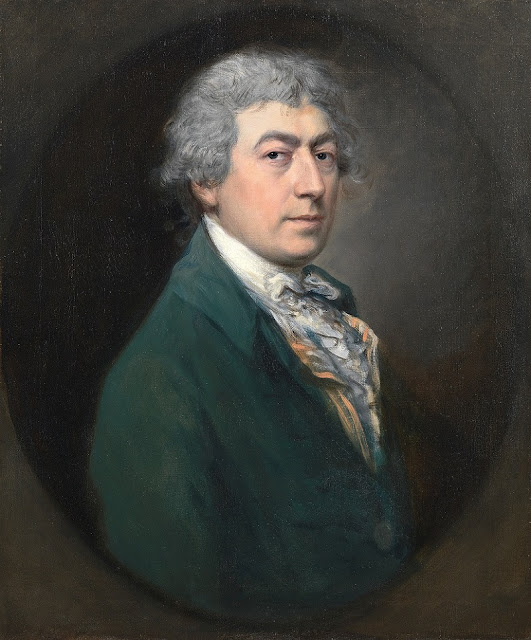 Thomas Gainsborough (1727-1788) was a native of Suffolk in the eastern part of England, directly across the North Sea from the Netherlands. John Constable (1776-1837) was born in that region too and both artists looked to the great Flemish and Dutch art traditions which had begun to depict family life as an important theme a century before.

Gainsborough's family were devout Christians, but not of the established Church of England. They were "independents," outsiders who could not hold government jobs or commissions in Britain's armed forces. Excluded from positions of power, many Independents found scope for their talents in the mines, factories and iron foundries of the rising Industrial Revolution. A Baptist preacher, Thomas Newcomen, invented the first effective steam engine in 1712. 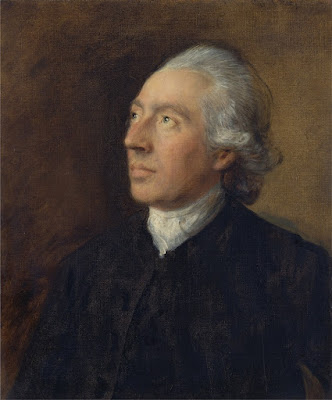 Gainsborough's brother, Humphrey, followed a similar path. Humphrey was the minister of the Independent congregation of Henley-on-Thames on Sunday. During the workweek, he was an engineer, who is credited with a number of inventions, including improvements to Newcomen's engine.

Very much an "independent" himself, Thomas Gainsborough directed his creative talents in a different direction - the field of art.

Another vital factor about Gainsborough was  his personality. A charismatic and contradictory man, Gainsborough's personality was cut from the "whole cloth" of human nature.

A portrait painter by necessity, Gainsborough devoted himself to painting "landskips" of the English countryside - which seldom sold. He cared little for reading but was a skillful amateur musician. Generous to his friends, Gainsborough was thin-skinned and combative in his relationship with the art establishment, often at odds with Sir Joshua Reynolds, the president of the Royal Academy.

And then there was his family. Gainsborough was a loving, doting father to his two daughters, Mary and Margaret. He was dutiful to his wife, Margaret, respecting her good sense and financial management skills. Gainsborough, however succumbed to the sexual temptations of the "rakehell" 1700's. He nearly died in 1763 of a fever likely caused by a "dangerous liaison."

Gainsborough's infidelity was especially hurtful as Margaret was the illegitimate daughter of the third Duke of Beaufort. She received a hefty annuity from the Duke's estate which bankrolled Gainsborough's artistic career, especially during his early struggles. Thus, Gainsborough's unfaithfulness was truly a "blow upon a bruise."

By way of recognition of his wife's many virtues, Gainsborough painted a number of portraits of her later in life. This 1777 likeness of Margaret Gainsborough is surely one of the greatest portraits of a wife ever painted by a husband. 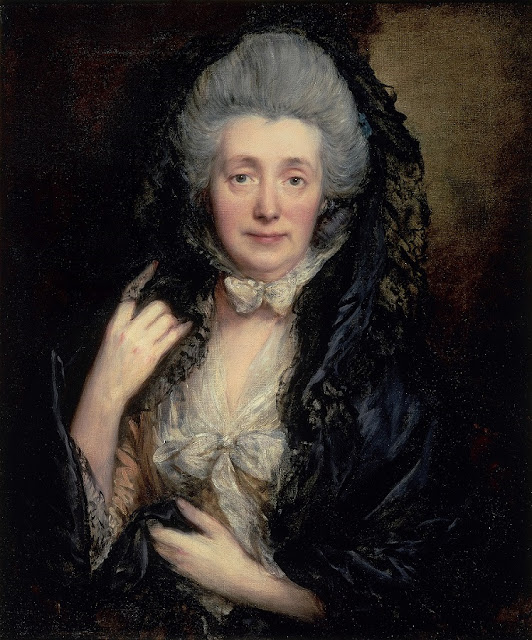 For all the excesses and contradiction in his life, Gainsborough was shrewd and perceptive in the way he portrayed his family. He both loved his family as individuals and grasped their strengths and weaknesses. In doing so, Gainsborough had to have reflected on his own character and character faults. Only a person with strong self-awareness could have painted the incredible portraits which we see in the special exhibition gallery at Princeton. 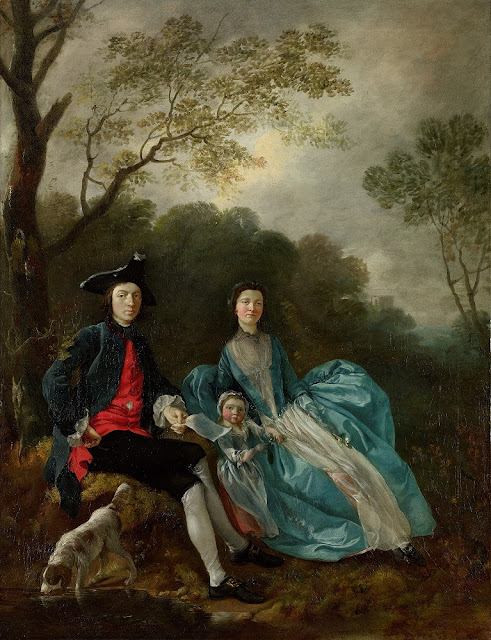 The Artist' with his Wife Margaret and Eldest Daughter Mary, 1748

One of the first paintings on view in Gainsborough's Family Album is a very early work, painted in 1748. It shows a dapper Gainsborough and his wife, Margret, wearing a billowing, blue silk dress. Gainsborough's family was engaged in the clothing trade and he was extremely skillful in depicting a variety of textiles. This is a very fashionable painting, a conversation piece in the style of Gainsborough's teacher, Francis Hayman.

The Artist with his Wife, Margaret and Eldest Daughter Mary is also a somber, sorrowful work. The little child died before it was finished and the expressions of her parents reflect their emotions. Gainsborough had been attempting to establish his painting business in London at this time. In order to protect his wife and future children, he made the courageous and risky move to leave London for the more healthy environment of Sudbury in Suffolk and then the spa resort of Bath.

Gainsborough and his wife were blessed with two surviving daughters. The eldest was also named Mary, born in 1750, with Margaret following a year later. Gainsborough called them "Molly" and "the Captain." 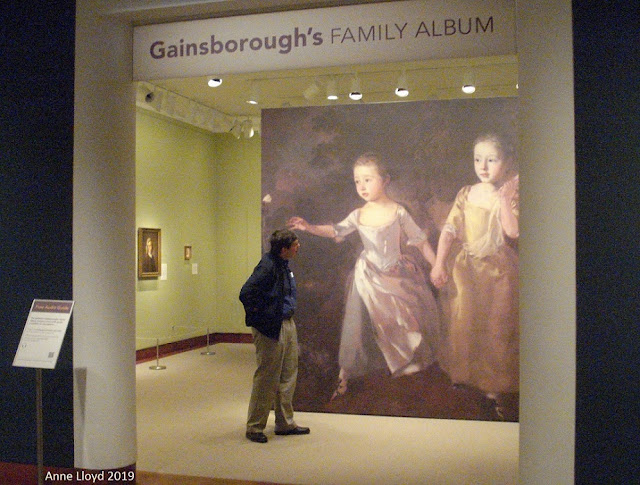 Anne Lloyd, Photo (2019)
View of the entrance to the Gainsborough's Family Album exhibit

While the girls were still very young, Gainsborough painted them chasing a butterfly, one of the great treasures of British art. This enchanting work appeared in the first presentation of Gainsborough's Family Album at the National Portrait Gallery in London. It is not on view in the Princeton show but a spectacular, over-sized copy welcomes visitors at the entrance to the exhibition gallery.

In 1760-61, Gainsborough painted a pair of double-portraits of his daughters which pose a number of questions. Gainsborough devoted exceptional skill to the faces of Mary and Margaret, yet both pictures of the adolescent girls remained unfinished. The most likely answer is that these were experimental paintings, tests of Gainsborough's ever-developing technique. 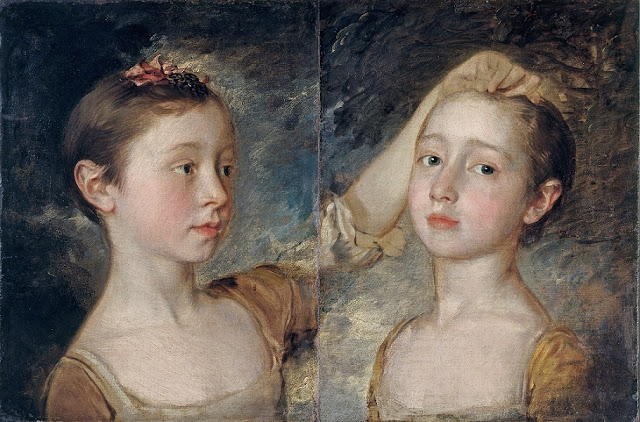 The portrait of Mary reaching out to Margaret was originally painted on a single canvas, with Mary positioned slightly above Margaret. Later, the painting was cut into two separate portraits. Restorers, at some point in more recent times, reunited and touched-up the two parts, albeit in a way that was never intended. Had this been a finished painting, none of this would likely have occurred.

The unfinished nature of the double portrait of Molly and The Captain which introduces this review provides more insight into Gainsborough's technique. The cat they are playing with is barely sketched-in. Even more startling is the minimal attention given to the texture of the girls' dresses. For an artist who devoted enormous effort to getting the sheen and crinkle of silk and satin "just right," Gainsborough seems almost negligent in the way he painted his daughter's clothing. He just gives the impression in both of these portraits of everything but the faces of Mary and Margaret.

The word Impression is key to understanding Gainsborough. In many ways, he was the first "impressionist" though Velazquez could claim that honor too. It was not an accident either. Gainsborough often tied his painting brush to a long stick and painted at a considerable distance from his canvas. The effect was what you would expect in a Renoir or Van Gogh.

Sir Joshua Reynolds, speaking of Gainsborough after his death in 1788, directed the attention of his audience to how "all those odd scratches and marks… this chaos, this uncouth and shapeless appearance, by a kind of magick at a certain distance assumes form."

This "kind of magick" is less noticeable in Gainsborough's grand manor portraits - though it is certainly there. British artists - and more to the point, their aristocratic patrons - were enamored of the magnificent portraits of Charles I and his court painted by Anthony van Dyck. Every rich detail - exactly true to life. That was expected of Gainsborough and he complied, as can be seen in several formal likenesses he painted of his daughters as they matured into young ladies. 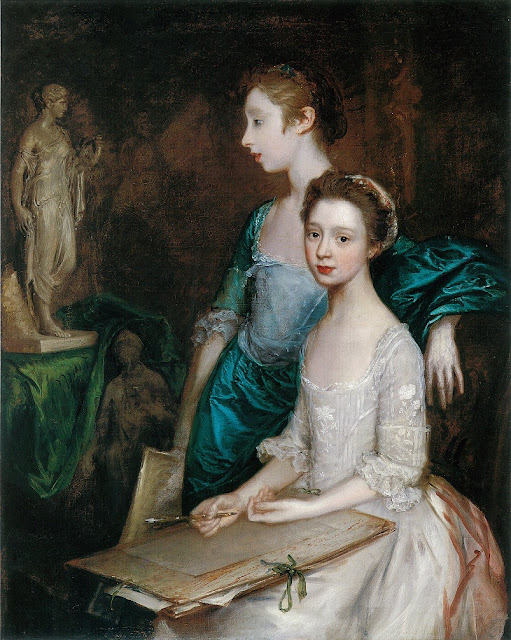 The 1763 oil on canvas, subtitled The Artist's Daughter, at their Drawing is especially evocative of Van Dyck's influence. Looking at this marvelous work helps us understand why Gainsborough spoke of the Flemish master with his dying words, "Van Dyck was right."

Gainsborough looked at much more than surface details as we see in the portrait he painted of his sister Sarah, around 1777-79. Sarah Dupont (1715-1795) was well into her "sixties" by the time her brother painted her. The bloom had long faded from her looks, but perceptive intelligence, dignity and integrity beam from her eyes. 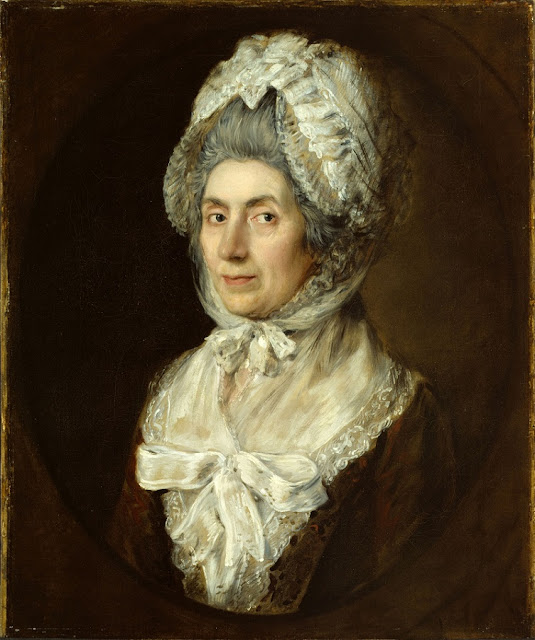 All these traits in combination make for a lively and aware person - a person of inner beauty. This is the person Thomas Gainsborough saw and painted nearly two and a half centuries ago.

What he saw in his sister, Sarah, Gainsborough saw and painted in his other family members. Their portraits, on display at the Princeton University Museum of Art, speak to human values which may be glimpsed on the faces of those we know and love, if - like Thomas Gainsborough - we look hard enough to see.