The Impressionist's Eye at the Philadelphia Museum of Art 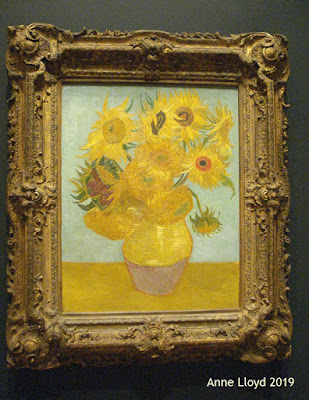 Curators of art exhibitions during the nineteenth and early twentieth centuries customarily displayed paintings floor-to-ceiling. Placement of an oil painting or a watercolor could make or break its reputation - and marketability.

When I visited the current blockbuster exhibition at the Philadelphia Museum of Art, The Impressionist's Eye, my eyes almost immediately detected a "problem" or warning flag. Pierre-Auguste Renoir's color-drenched Still Life with Flowers and Fruit, painted in 1889, hovered so high up on the gallery wall that prolonged study would surely leave the viewer with a "crick" in the neck.

Since the location of Renoir's still life fails to conform to the best practice of modern museum display, there had to be a reason for its seeming off-beat placement. Even by the standards of the 1800's, Still Life with Flowers and Fruit demands to be hung at eye level or close to it. Why so high? 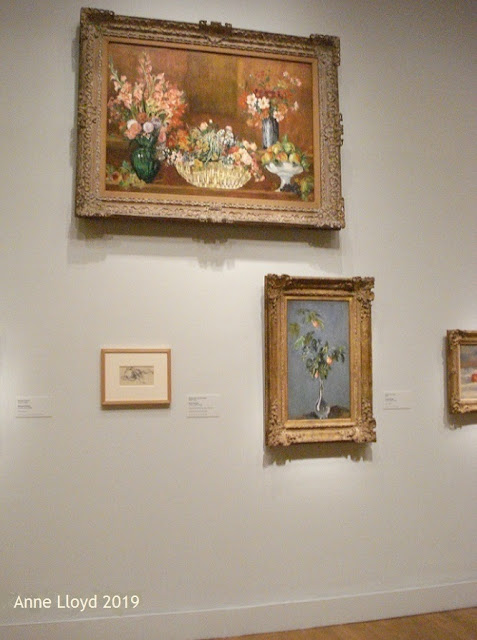 The answer, as I discovered, had everything to do with the title and theme of the Philadelphia Museum of Art (PMA) exhibition: The Impressionist's Eye.

In 1889, Renoir received some decorative commissions for several country villas. It is believed that when confronted with the challenge of creating an eye-catching painting for placement above a door way of one of these villas, Renoir conceived the idea of this still life.

A brilliant balance of complementary colors for the flowers set against a blood orange and Burgundy red background, Renoir's painting transformed the "blank" space over the door. Still Life with Flowers and Fruit is the kind of painting which turns a room into a salon. 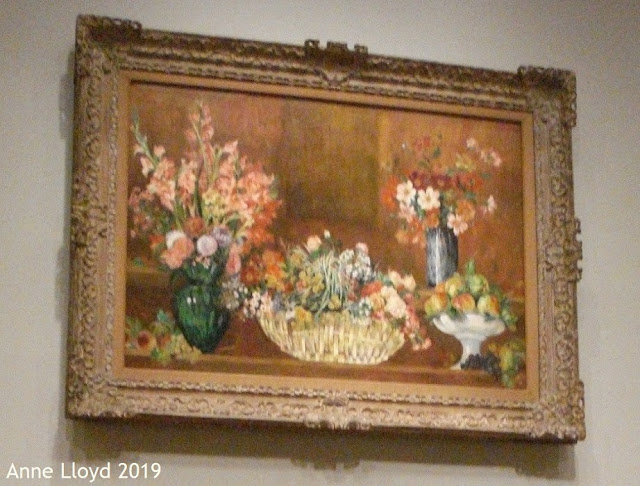 With this remarkable work, Renoir delivered a masterful lesson on the way that an artist's eye looks at a "problem" and finds a solution. His success calls into question the idea that Impressionists did little more than focus their eyes and paint the motif.

In an often quoted remark, Paul Cezanne declared that his fellow Impressionist, Claude Monet, "is only an eye, but my God, what an eye!"

Monet certainly was "an eye" as his long career of depicting the natural world attests. When we look at a Monet landscape like Bend in the Epte River near Giverny, the "eye-hand" coordination of this great artist is very evident.The sensation of looking at the dappled, rustling leaves of poplar trees along the riverbank was skillfully transmitted to the canvas. Monet's astonishing visual faculties were key to this artistic alchemy. 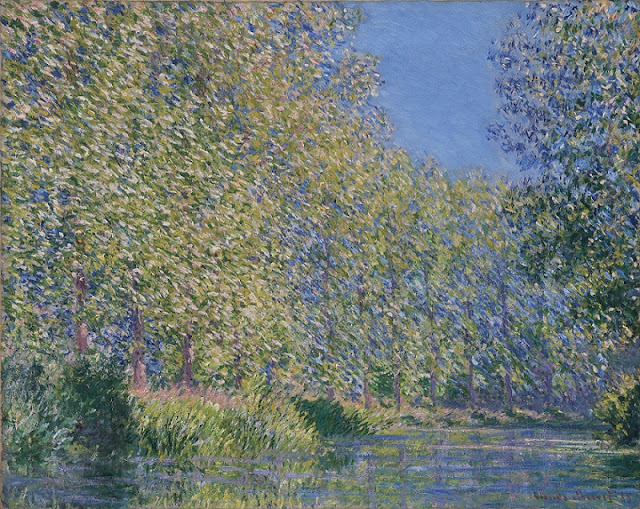 Claude Monet, Bend in the Epte River near Giverny,1888

Yet Monet was more than just an "eye." His technique was in a constant state of evolving, as was the work of Camille Pizarro, Edgar Degas and the rest. The Impressionists explored the realm of perceptional reality, earning a place for their art in the vanguard of the social and scientific theories of their time. Jules Laforgue, a noted critic, wrote in 1883:

The Impressionist’s eye is, in short, the most advanced eye in human evolution, the one which up until now has grasped and rendered the most complicated combination of colors known.

Despite their emphasis on painting in oils en plein air, the Impressionists were anything but doctrinaire. They embraced a wide range of media, exploring every opportunity - like Renoir with Still Life with Flowers and Fruit - to create works of art which were innovatory in technique and of tremendous emotional significance.

The Impressionist's Eye is the latest in a series of major exhibitions almost entirely composed of works of art from the PMA's collection. With a massive rehab of the Philadelphia Museum underway, PMA curators are looking intently at their own extensive holdings of paintings, works on paper and sculpture.The immediate objective of such scrutiny is to continue presenting major exhibitions in a "hard hat" environment. But there is a much more important curatorial task underway, as well. 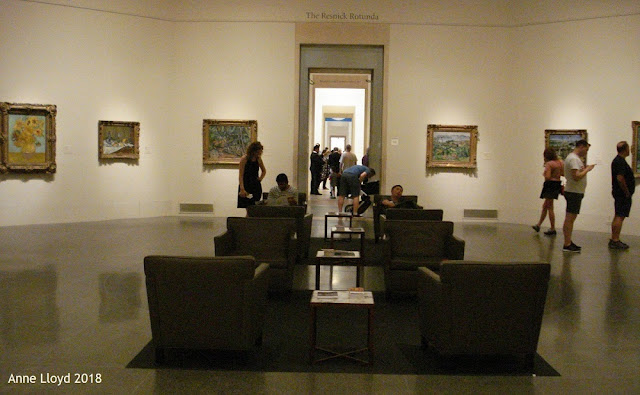 Anne Lloyd, Photo (2018)
The Resnick Rotunda at the Philadelphia Museum of Art

Most of the oil paintings in The Impressionist's Eye exhibition are regularly on display at the Philadelphia Museum of Art. Others, especially the clutch of precious Van Gogh's, are so often on loan to other museums that the iconic Sunflowers and Portrait of Madame Augustine Roulin and Baby Marcelle are nowhere to be seen. 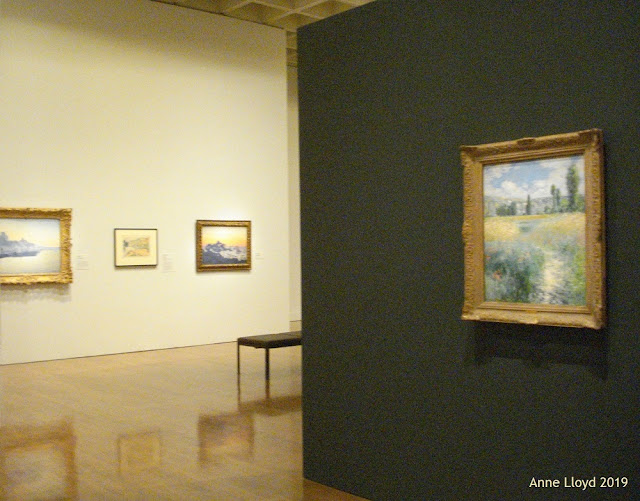 By looking anew at these familiar Impressionist oil paintings in the setting of a special exhibition, we are enabled to gain a better appreciation of these works. This is especially true in assessing their relation to the revolutionary era in which they were created.

The Impressionist oeuvre included sketches, water colors, prints, photographs and sculpture - every form of art which these artists could use to take the measure of the world around them. 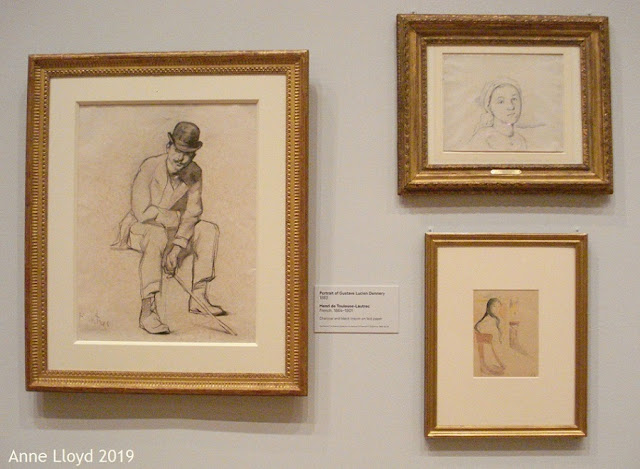 The juxtaposition of so many Impressionist sketches with a "starting line-up" of celebrated oil paintings is one of the immediately noteworthy features of The Impressionist's Eye. I was especially impressed with a group of sketches by three different artists, Henri de Toulouse-Lautrec, Paul Cezanne and Berthe Morisot. Each drawing demonstrates versatility in draftmanship across a spectrum from the crisp realism  of Toulouse-Lautrec to the ethereal evocation of beauty and character in the works by Cezanne and Morisot. 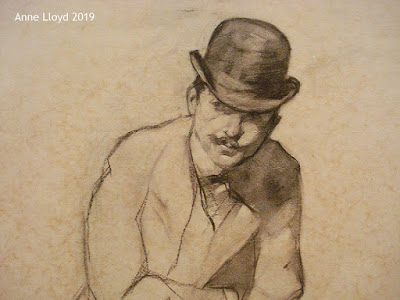 Toulouse-Lautrec's Portrait of Gustave Lucien Dennery is an outstanding work in its own right, but was almost certainly created in preparation for a full-scale oil portrait executed the same year,1883. This portrait, of an artist colleague of Toulouse-Lautrec's, is in the Louvre collection. It would have been a major coup to have the drawing and the oil painting displayed for comparison in The Impressionist's Eye.

Fortunately, the Philadelphia  Museum of Art's collection has a major Impressionist oil painting and preliminary sketch which permits us to do exactly that.

Cezanne's Mont Sainte-Victoire is one of the most familiar Impressionist-era masterpieces, almost always on view at the Philadelphia Museum of Art. By contrasting this mighty oil painting with one of Cezanne's water color and graphite versions of the mountain, we are enabled to look ourselves with "the Impressionist's eye." 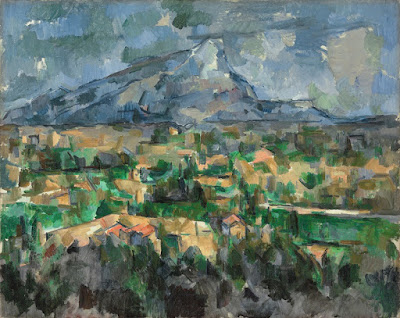 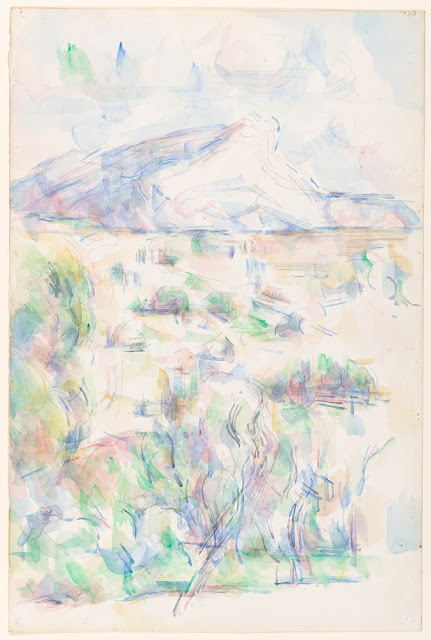 Thompson notes that Cezanne created seventy images of Mont Sainte-Victoire, "making it one of his most repeated and varied themes. None of these objects is a repetition of another; each comes at the motif from a different point of view..."

Cezanne's deliberation in visualizing Mont Sainte-Victoire - focusing and refocusing to gain new impressions of his favorite mountain - was a trait he shared with his fellow Impressionists and Post-Impressionists. Their art works, in turn, reflected scientific inquiry and social debate occurring at the same time.

The great American scholar, Meyer Schapiro (1904-1997) traced the long debate on the nature of human perception which took place prior to the first Impressionist exhibition of 1874. The shift in scientific theory from a belief in absolute phenomena to a world of transitory sensations sparked acrimonious debate. This was reflected in the critical response to the Impressionist salons of the 1870's and 80's. In a book based on his famous lecture series on Impressionism, Schapiro noted:

Impressionist pictures were, in their day, often described as madly arbitrary because the painters gave to familiar objects in the pictures of landscapes colors that others had not yet perceived in nature. Scientists, exploiting their authority, supported the hostile, often philistine, reactions, by asserting that a defect of the artist's eye, lens, or retina was responsible for the tones of violet in their canvases, much as a doctor later accounted for El Greco's elongated figures by his supposed astigmatism...  Although the Impressionists shocked their contemporaries by introducing into landscape certain tones and relationships of colors that looked unreal, they were later acclaimed as the acute observers of a true coloring that we now take for granted.

The Impressionist's Eye charts the way the "madly arbitrary" coloration of Monet, Renoir and company was put into practice. Organized thematically, we are enabled to see how the "eye" of these pioneering modernists focused on nature, the modern city, everyday objects and people (with a special nod to the bathers of Degas, Renoir and Cezanne).

But was there really such a "disconnect" between the Impressionist "founders" = Monet, Pissarro and Renoir - and the second generation who embraced Seurat's exacting pointillist color theory? 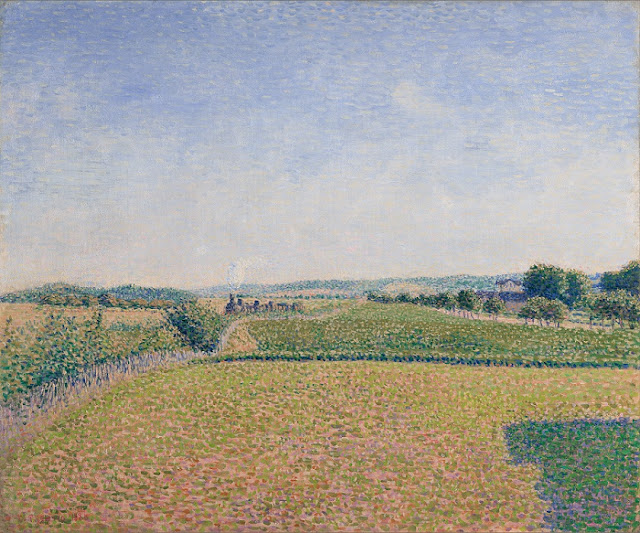 Camille Pissarro, the "father" of Impressionism, embraced pointillism - for a few years - as we can see in one of the key paintings of the exhibition, Railroad to Dieppe. Pissarro wrote that he spent two weeks of laborious effort on this scene. The impact of urban and Industrial development, here in the shape of the railroad locomotive, was a key element of Pissarro's oeuvre throughout his long career.

Pissarro's flirtation with pointillism raises questions of Impressionism vs Post- Impressionism. Where, for instance, do unconventional artists like Berthe Morisot, Vincent van Gogh and the great Degas fit into such a hard and fast equation?

Given the continuities and singularities of the Impressionist revolution, it is perhaps unfortunate that the artists did not retain their original group title, "Independents." Had this been done, the "either or" categories would not likely have been created.

A particularly astute quote from the exhibition text provides the best answer to this important topic.

For the Impressionists and Post-Impressionists, works that were rapidly produced — or gave the appearance of being made quickly — were complete statements in themselves. Over a forty-year period, we witness their mark-making changing across media from blunt strokes to rational dabs and dots and later to flat planes of color, as they sought to capture fleeting moments.

Given the "embarrassment of riches" on display in The Impressionist's Eye, one could continue a review like this for a very long time without exhausting superlatives in describing the exhibit. In closing, it is more sensible to underscore several salient points. 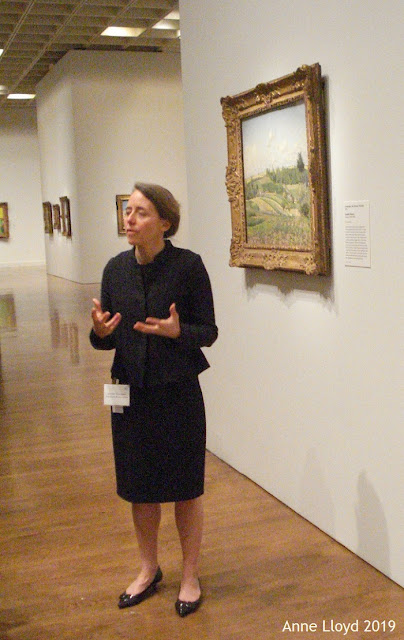 First, Jennifer Thompson has just written a major study of the art of this era, on view in the exhibit. Impressionism and Post-Impressionism: Highlights from the Philadelphia Museum of Art is an outstanding book. I plan a separate review for the summer months.

The second point is that The Impressionist's Eye is an exhibition which deserves a second or third visit. Many of the works on paper will be replaced by a second rotation, due to their sensitivity to light. Among the treasures due to be displayed will be Mary Cassatt's stunning reworking of the techniques of the great Japanese print-makers, The Letter. 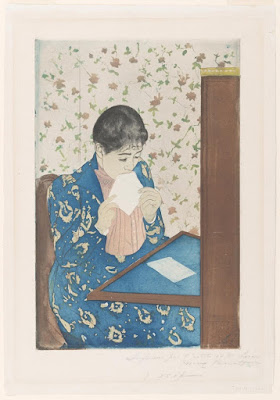 Ultimately, the greatest insight to be derived from The Impressionist's Eye is a seemingly contradictory point. Monet, Renoir, Degas, Morisot and all of the other "Independents" devoted their prodigious talents to depicting life in its temporary, transitory dimensions. But in doing so, they pioneered ways of looking at "fleeting moments" that have become an enduring source of joy, insight and creative inspiration for all humankind.

Anne Lloyd, Photo (2018) Gallery view of the Resnick Rotunda, one of the principal galleries devoted to Impressionist painting at the Philadelphia Museum of Art.

Posted by Art Eyewitness at 6:55 PM