Moroni: the Riches of Renaissance Portraiture at the Frick Collection 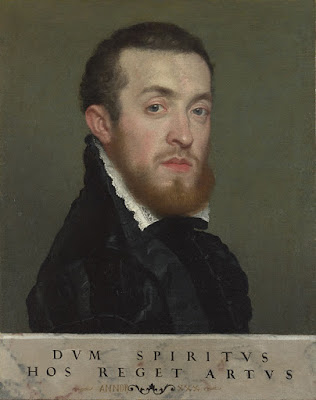 Moroni: the Riches of Renaissance Portraiture

Many of history's greatest creators achieve success because their abundant skills mirror the vision, ideals and needs of the societies in which they live. One may say of such fortunate individuals that they are the right artist in the right place at the right time.

Giovanni Battista Moroni (c.1520-1579) was not one of these artists. Moroni was blessed by neither time nor circumstance. His talent, however, was superlative and his paintings are masterpieces of the highest order.

Moroni is the subject of a brilliant exhibition at the Frick Collection. Moroni: the Riches of Renaissance Portraiture is now in its final days. 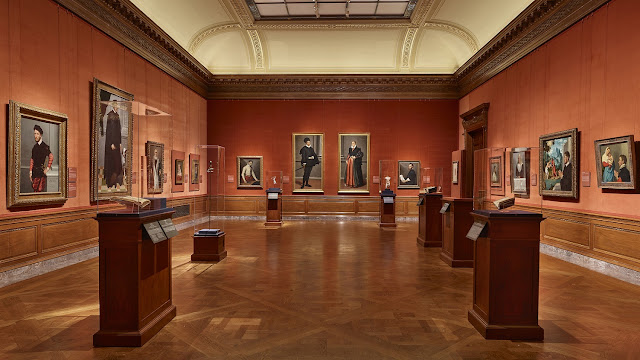 A view of art works from the Moroni: The Riches of Renaissance Portraiture exhibition in the East Gallery, Frick Collection; photo: Michael Bodycomb

So important and revelatory is this reappraisal of the little known Italian Renaissance master that a special trip to New York City is in order if you have not seen the show or if you want a second look. Cancel your engagements, adjust your schedule - go to the Frick exhibition and witness the paintings of a truly unsung hero of art.

Why is Moroni not better known? Geography, as we will discuss, certainly plays a major role. But the real reason for Moroni's eclipse is a consequence from what we can call the "end of the Renaissance." This is a little studied, indeed often unrecognized, aspect of cultural history.

Following the sundering of Christendom by Martin Luther's challenge to Papal authority and the horrific sack of Rome in 1527, the intellectual climate of Europe dramatically changed. The mood of writers, philosophers and artists darkened. A controversial book or painting could alienate the "powers that be," with very painful consequences for the offending author or artist. Even Michelangelo was not above criticism. 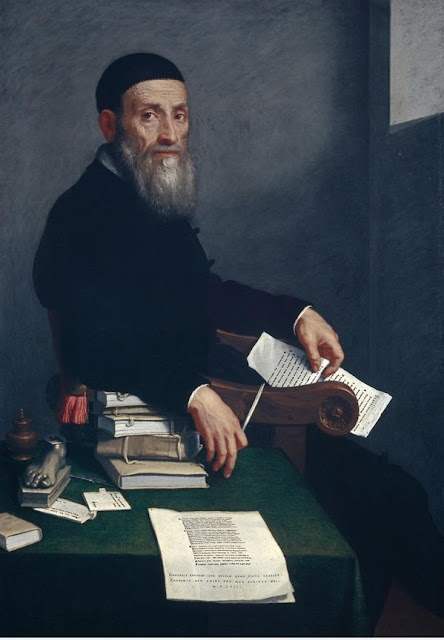 Moroni's entire working life took place in the altered circumstances of the "end of the Renaissance."

Moroni's obscurity was further affected by the fact that he was not a native of Florence or a Venetian. He was born in the small town of Albino in Lombardy. He spent almost all of his life there or in nearby Bergamo. Located between Milan and Venice, Moroni’s home ground was not exactly the dark side of the moon. Moroni was rewarded with portrait commissions from the nobles and merchants of Milan and Venice, but he never made an effort to relocate to either of these powerful and wealthy cities.

Little is known of Moroni's inner life but it is almost certainly true that he remained in Albino/Bergamo by choice, rather than by necessity. Moroni's decision to stay close to home is likely to have been motivated, at least in part, by a very sensible character trait in difficult times - discretion.

In 1545, Pope Paul III and the bishops and theologians of the Catholic Church convened a major council to strengthen the Church in response to the break-away Protestant denominations. The council was convened in the Italian city of Trent, located about ninety miles from Bergamo.

Moroni, in his early twenties, was just entering the prime of life as the council began. He traveled to Trent, where commissions for religious-themed work could be expected. He stayed for a few years, long enough to discover that Church leaders were not pleased with the current trends of art, notably Mannerism with its self-indulgent,erotic paintings, thinly disguised as allegory.

Mannerism was mainly a Florentine school of art. Moroni had trained under another Lombard painter, Moretto da Brescia (c.1498-1554), who rejected the coy sensuality of the Mannerists.

Moretto, a notably pious artist, specialized in full-length portraits. He also excelled in capturing the growing climate of fear and melancholy which was affecting people all over Europe. Moroni was greatly influenced by Moretto and, on his return from Trent, showed that he could match and even excel him.

One of Moroni's first full-length portraits is on view in the Frick exhibition. This arresting work shows Gian Ludovico Madruzzo, a Catholic clergyman destined for high places in the Church. Moroni may have met him through Madruzzo's uncle, who was the prince-bishop of Trent. Madruzzo succeeded to the title later in life and was so esteemed that he was selected to deliver the funeral eulogy for Emperor Charles V. 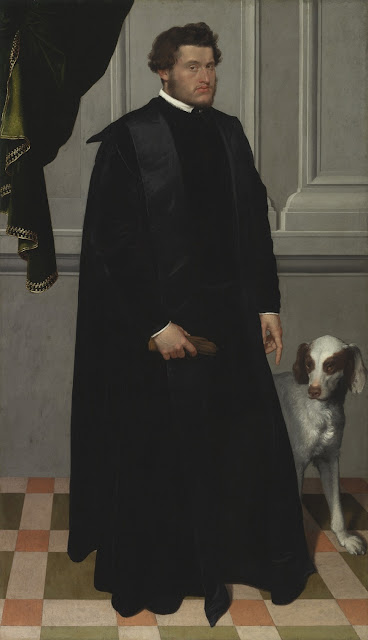 For all of his honors and friends in high places, Gian Ludovico Madruzzo does not appear in his portrait to be comfortable or confident. His pose is one of authority, but he stands stiff and “on guard.” Dressed in a black clerical gown, he looks more like an austere Spanish nobleman alert to a slight to his honor. But what really grabs and holds our attention is Madruzzo's facial expression. 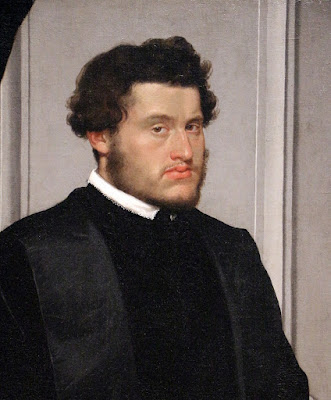 Madruzzo regards the viewer with deep scrutiny, bordering on suspicion. It is a tense moment. Just back from a walk with his faithful dog, he confronts a messenger with an official dispatch, or perhaps a favor-seeker begging a moment of his time. Madruzzo's skeptical, haunted expression testifies to the age of anxiety in which he and Moroni lived.

Moretto's influence on Moroni is also apparent in the religious paintings which were the other feature of his work. Moroni utilized the art of his teacher in a strikingly unique manner.

In his reverential work, Gentleman in Adoration before the Madonna and Child, Moroni depicts an aristocratic worshiper in a scene straight out of the devotional practice being formulated by the Council of Trent. The Council was still in cession at the time of the painting, around 1555, and the theologians assembled at Trent were adamant that religious art be direct and understandable statements of Christian faith.

Moroni conformed exactly to the Council of Trent's doctrine, with brilliant psychological handling. The Virgin Mary and the Christ Child are painted in the style of painting by Moretto but the pious "gentleman" is not praying before a painting or a statue. He is worshiping in the living presence of Mary and Jesus. 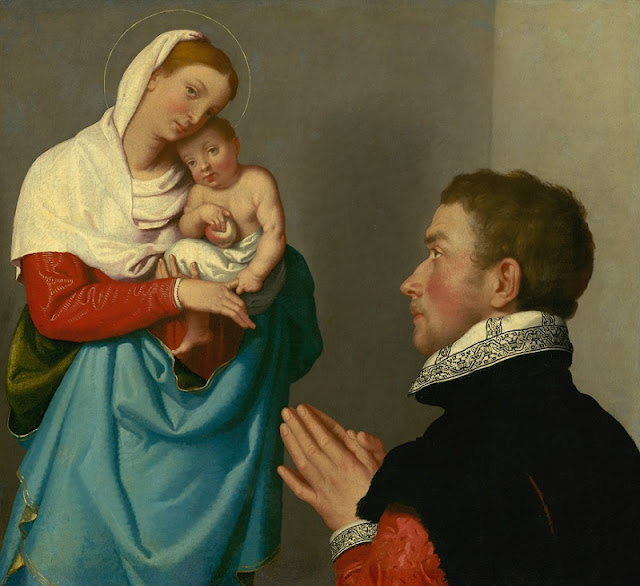 Giovanni Battista Moroni,
Gentleman in Adoration before the Madonna and Child, ca. 1555

Moroni reveals this by showing the thin golden ring of Mary's halo and her shadow on the wall.  Statues cast shadows but do not have ethereal circlets around their heads. In this subtle way, Moroni is depicting a religious experience of the most profound kind.

Gentleman in Adoration before the Madonna and Child is a powerful evocation of contemplative prayer. In the tormented times of the late 1500’s, Catholics were encouraged to meditate on their religious beliefs, as the protagonist is doing , and then put their faith into practice. One of the great books of the time, The Spiritual Exercises by St. Ignatius of Loyola, provided a step-by-step guide to this task. Moroni’s painting illustrates St. Ignatius’ injunction to keep our minds “secluded” by “concentrating instead all our attention on one alone, namely the service of our Creator and our own spiritual progress…”

Moroni’s art, however, was not “secluded” from the everyday rituals and realities of his era. The work ethic of the artisan class, macho male bravado, feminine “wiles” and folk magic all appear in his portraits. In a master stroke, the curators of the Frick exhibition have assembled artifacts from  Moroni’s era which match those in his paintings – often to an astonishing degree. 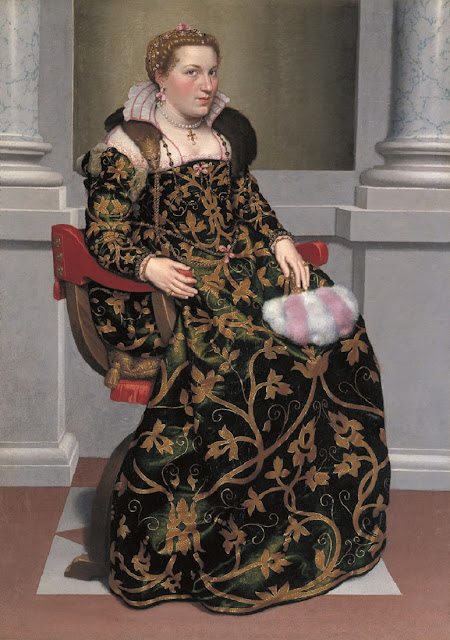 This is best exemplified in Moroni’s full-length portrait of Isotta Brembati (1530-1586), painted around 1556.  Moroni had painted a portrait bust of the same lady about five years earlier, notable for the sharp, calculating look in her eyes. Born in Bergamo, she was a brilliant woman and an accomplished poet, writing in Latin.

Except to note that Isotta Brembati had aged quite a bit in the interim, our attention does not linger on her face very long in in the second portrait. Instead, we focus on her splendid apparel, jewelry and most spectacularly, a martin pelt draped over her shoulder. Directly in front of this magnificent portrait is a display of accoutrements replicating those in the painting. 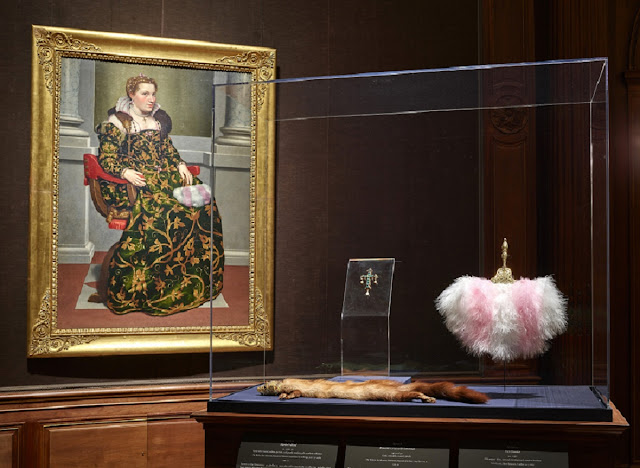 Giovanni Battista Moroni's Isotta Brembati, with artifacts from the 1500's, on display in the Oval Room of the Frick Collection, photo: Michael Bodycomb

The most extraordinary of these artifacts is the a golden, bejeweled mask covering the marten's head, Bearing the symbol of a dove or the Holy Spirit,  it was an amulet for women of child-bearing years. The fur of the martin, according to folk lore, increased the chance of conceiving a child and protected the mother during pregnancy. 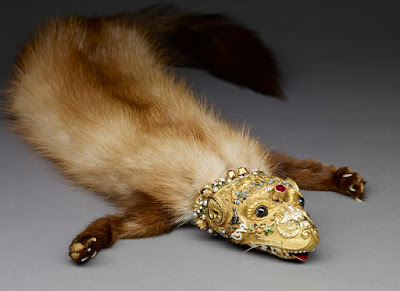 A golden-headed marten pelt also appears in a splendid portrait by Paolo Veronese of Countess Livia da Porto Thiene, a noblewoman from Vicenza who was pregnant when she posed in 1552. This portrait by Veronese is one of the treasures of the Walters Museum in Baltimore. In 1967, curators at the Walters secured an actual golden marten mask dating to the 1500's to complement the Veronese portrait. Thanks to the generous loan from the Walters, this golden mask and a more modern marten pelt are featured in the Moroni exhibition at the Frick. 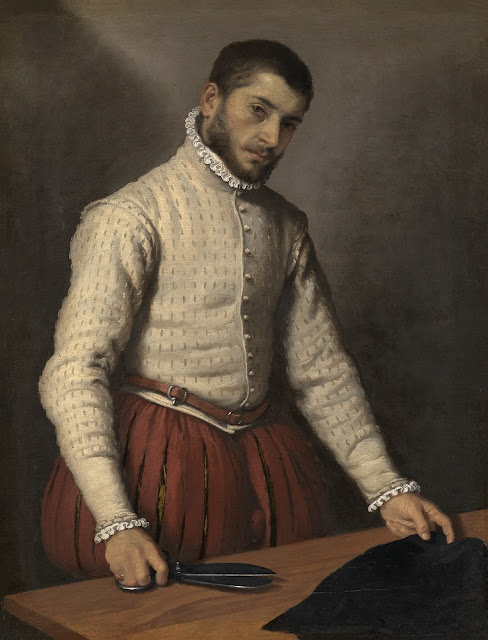 Moroni's most famous painting is on view in the Frick exhibition. It is a portrait but not of a countess or clergyman or melancholy humanist. Instead, The Tailor ('Il Tagliapanni') is a true Renaissance man. Exuding intelligence, skill and confidence, the tailor is about to cut a bolt of black cloth, the most costly of fabrics due to the number of immersions in dye to "fix" the color.

There are no known self-portraits of Moroni but I have an idea that the artist was painting a part of himself when he portrayed this unknown tailor. When Sir Charles Eastlake purchased this work for the National Gallery in London in 1862, he was certain that this showed a nobleman in the guise of a tailor. Close examination of the fabric of the tailor's suit shows that he is wearing cloth "suitable to his station."

The tailor's "station" is that of a master craftsman. Supremely gifted in his difficult trade and a perceptive student of human nature, the tailor had to satisfy the demands and needs of the "high and the mighty" - just as a portrait painter must do. He is the kind of man that Moroni proved himself to be.

Why did Giovanni Battista Moroni stay in Bergamo rather than Milan, Venice, Rome or the court of the Holy Roman Empire? The answer is there in his unforgettable paintings. The  "great' world exists on our doorstep, in our backyard, on our neighbor's face, just as much as it does in a glittering palace or the likeness of a fashionable celebrity.

Three centuries after Moroni died, another Italian genius was asked why he remained so close to home rather than seeking his fortune in the capital cities of Western Europe and the United States. Moroni would have appreciated his reply.

"You may have the universe," Giuseppe Verdi said, "if I may have Italy."

A view of art works from the Moroni: The Riches of Renaissance Portraiture exhibition in the East Gallery of the Frick Collection, New York City; photo: Michael Bodycomb

Giovanni Battista Moroni's Isotta Brembati, with period artifacts from the 1500's, on display in the Oval Room of the Frick Collection, during the Moroni: The Riches of Renaissance Portraiture exhibition; photo: Michael Bodycomb