Maurice Sendak Exhibit at the Morgan Library and Museum 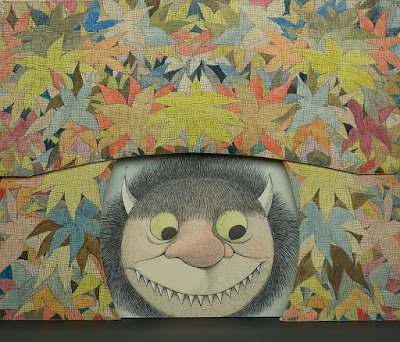 While F. Scott Fitzgerald worked on his final novel, The Last Tycoon, he jotted down a note which has since become a much-debated quote.

"There are no second acts in American lives.”

In Fitzgerald’s case, that remark was a self-fulfilling prophecy. He died shortly after jotting it down. The Last Tycoon, his come-back novel, was never finished.

Another American literary lion came close during the late 1970’s to suffering Fitzgerald’s fate. Yet, as Drawing the Curtain: Maurice Sendak's Design for Opera and Ballet at the Morgan Library and Museum shows, this beloved author did enjoy a “second act.” 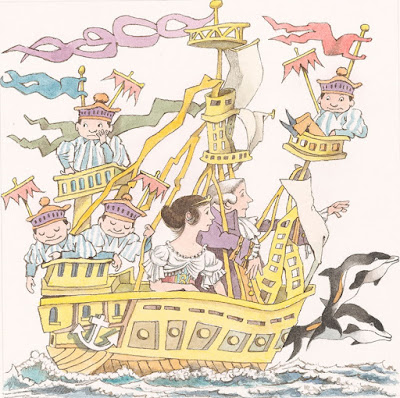 Maurice Sendak (1928-2012) is arguably the greatest artist/illustrator of children's books of the twentieth century, certainly in the United States. Less well-known is his astonishing oeuvre for the theater. Based upon the bequest to the Morgan Library of 900 pieces of Sendak's art, Drawing the Curtain presents over 150 works of art, personal artifacts and documents related to Sendak's theatrical career. 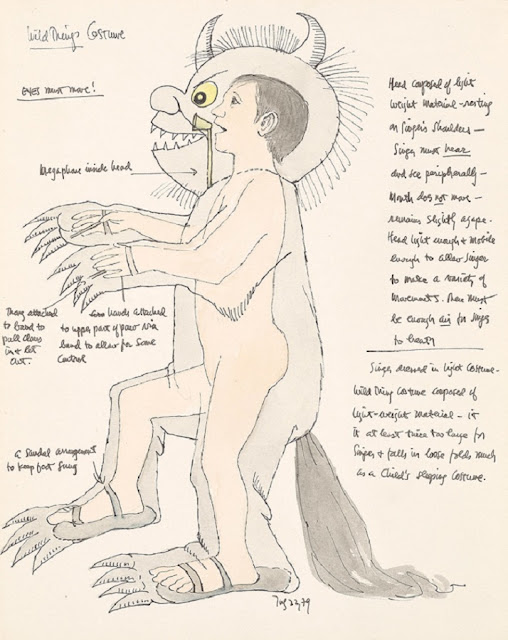 Maurice Sendak, Study for Wild Things costume, with notes
(Where the Wild Things Are), 1979

The theater costumes which Sendak designed were astonishing. Some of the costumes in Where the Wild Things Are measured eight feet in height and required two people to manipulate. On view at the Morgan are two less-intimidating characters from Sendak productions, the owl from Cunning Little Vixen and Tiger Boy from Nutcracker. They greet you at the gallery entrance, heralds of the wonders to be found inside. 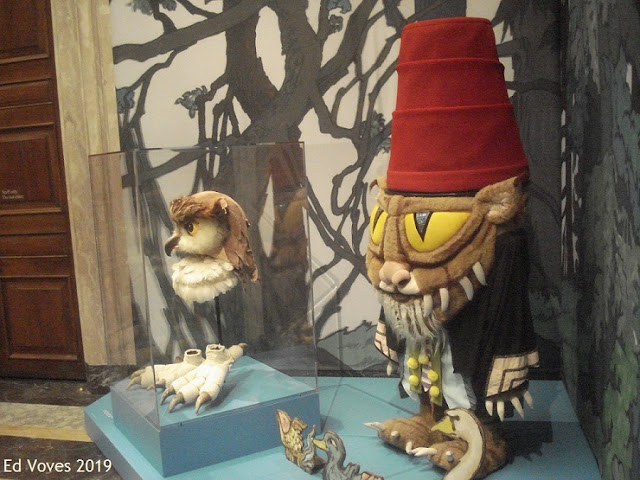 Ed Voves, Photo (2019) View of the entrance of the Morgan Library & Museum exhibition, Drawing the Curtain: Maurice Sendak's Designs for Opera and Ballet

The Morgan exhibition focuses on Sendak's drawings and designs for costumes, “stage props” and theater curtains. These he created for the opera based on his celebrated children’s book, Where the Wild Things Are, and for Mozart’s The Magic Flute, Janáček's Cunning Little Vixen, Prokofiev’s Love for Three Oranges and Tchaikovsky’s The Nutcracker. Each of these innovation productions is brilliantly explored.

During much of the 1970’s, Sendak was engaged on a new book, Outside Over There. Already a controversial figure in children’s literature, Sendak struggled to complete this magnificently illustrated, yet frightening tale. It tells the story of a young girl named Ida, who rescues her baby sister from goblins. It was not a reassuring “kid’s” book for the first Sesame Street generation. At one point, Sendak was advised to give-up on his problematical masterpiece.

Sendak persevered, especially since there was a strong current of autobiographical sentiment in Outside Over There. The youngest of three children, Sendak had enjoyed a close bond with his brother Jack and sister Natalie. Although he had never been kidnapped by "goblins," Sendak survived - and thrived - as a child of the 1930's Depression era largely through the affection and support of his siblings.

Brotherly - and sisterly - love also helped Sendak score his big breakthrough into the art world, ultimately leading him to a second career in the theater.

Sendak had been fascinated with Disney cartoons and pop-up books as a child. His birthday, June 10, 1928, incredibly,was the day that Mickey Mouse was first designed. In 1948, Sendak, with the help of Jack and Natalie, crafted movable toy depictions of fairy tale episodes, including  Little Red Riding Hood and Pinocchio (below). 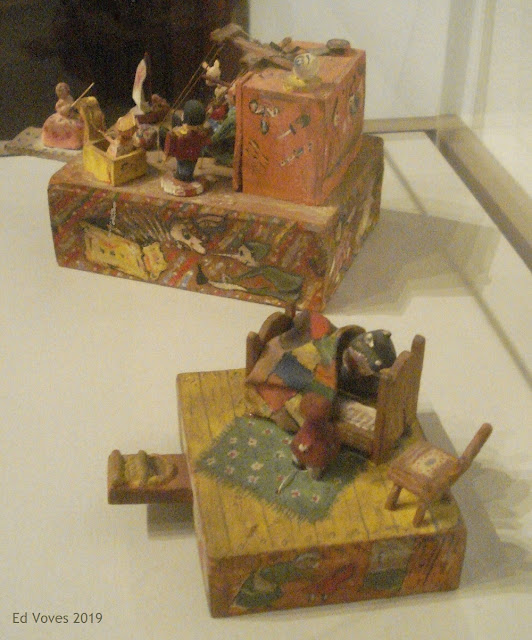 Sendak hoped that the famous New York City toy store, F.A.O. Schwarz, would be able to produce and market his creations. F.A.O. Schwarz declined, given the cost to produce the toys for a mass market. But the chief of advertising at F.A.O. Schwarz hired Sendak to help create the store's attention-grabbing window displays.

In 1978, as Sendak anguished over Outside Over There, destiny once again came knocking on his door. He received a phone call from the noted theater director, Frank Corso.  Although he had never met Sendak, Corso had a feeling that Sendak's unconventional art and psychological insight would be well-suited to designing the costumes and sets for a new production of Wolfgang Amadeus Mozart's The Magic Flute.

Sendak thought it over. The risk was huge, possibly derailing publishing Outside Over There.

"Fifty,” Sendak reflected, “is a good time to either change careers or have a nervous breakdown.”

Sendak accepted Corso's offer, in no small part because classical music was a personal passion and The Magic Flute just happened to be his favorite opera.

It is fascinating to examine the works of art which Sendak created for this production of The Magic Flute. Not only did Sendak design costumes and sets, he crafted dioramas to help envision how the production would look on the stage. 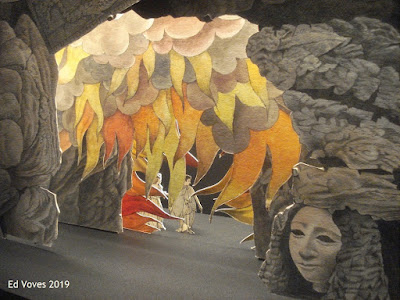 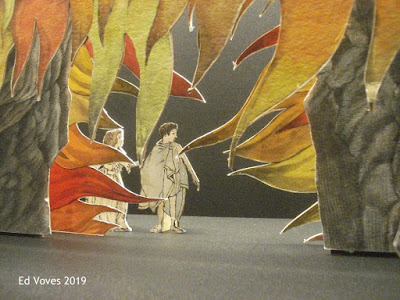 Ed Voves, Photo (2019)
Two views of a diorama made by Maurice Sendak
for the 1980 production of The Magic Flute

Here we can see a reassertion of the do-it-yourself savvy that was evident in the toy designs he unsuccessfully tried to sell to F.A.O. Schwarz thirty years before. With remarkable patience and skill, the Morgan curatorial team carefully reassembled these miniature marvels for the exhibition.

Sendak's theater designs also reflect his art scholarship, particularly his visits to the Morgan Library to study the rich collection of works by William Blake and Giovanni Tiepolo. The latter's Venetian work influenced Sendak's design's for the 1981 production of Sergei Prokofiev’s Love for Three Oranges, the opera set during the French Revolution. 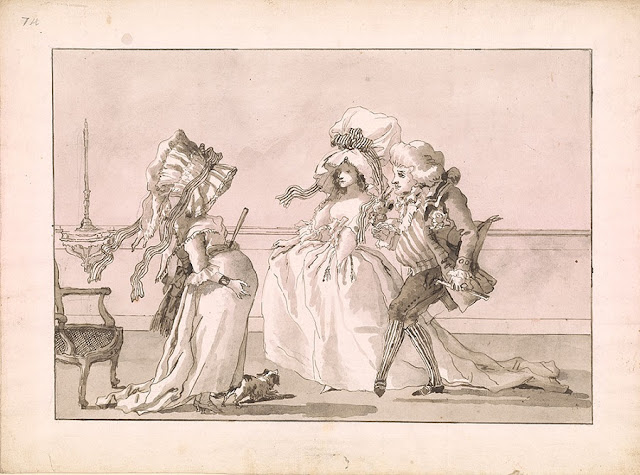 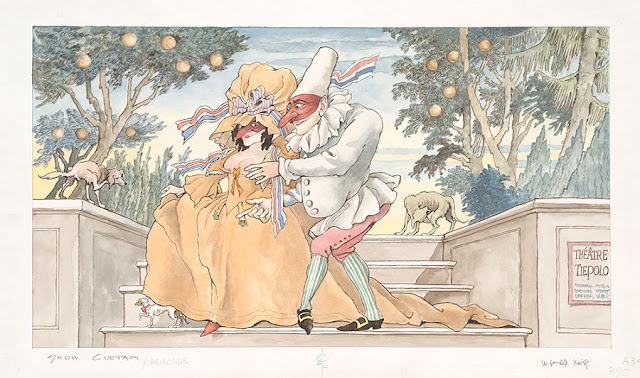 Agreeing to collaborate with Corso on The Magic Flute launched Sendak into an incredible burst of creative energy. At one point, in 1981, Sendak was at work on four different operas at the same time. The pace, scope and scale of this schedule was punishing. Even Sendak could not always guarantee complete success. 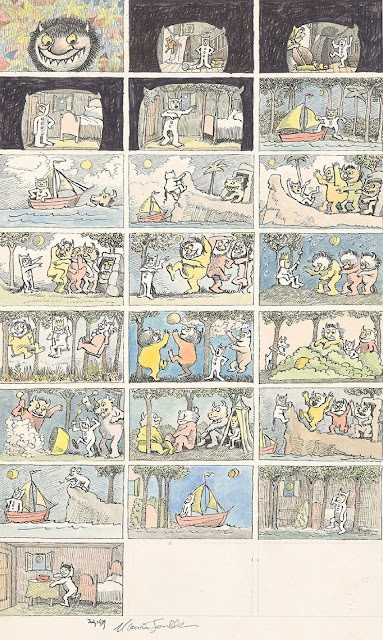 Maurice Sendak, Storyboard for Where the Wild Things Are, 1979

The 1980 premiere of the opera version of his own Where the Wild Things Are partly misfired. The score was not complete and the huge costumes difficult to use. Sendak  certainly devoted enormous effort on his part. He created a detailed storyboard, depicting the scenes of the opera in advance of the try-out. This storyboard, on view in the Morgan exhibit, makes for fascinating viewing as we see how Sendak managed the transfer of his classic 1963 story from book to stage.

Sendak teamed with Corso for a revival, indeed a completed version, of Wild Things in 1984. It was first performed in London and was a complete triumph.

One of the most notable - and controversial - features of Sendak's books was his refusal to "sugarcoat" life's challenges for children. Perhaps it would be more accurate to say he refused to add "sugarcoating" to mollify parents. In her book on Sendak, published in 1980, Selma Lanes quoted him on the challenges of writing and illustrating for children:

No one protects children from life because you cannot; and all we are trying to do in serious work is to tell them about life… You must tell the truth about a subject to a child as well as you are able, without any mitigating of that truth.

Sendak made few attempts to "mitigate" the truth as he saw it while working on the theatrical works under survey in the Morgan exhibition. Sendak's version of The Nutcracker was dark and alarming, yet closer to the original 1816 story than the charming Christmas classic which currently keeps ballet companies solvent from year-to-year.

Dark nuances may abound in Sendak's work but only because darkness as well as light, death as well as birth, are part of life.

The nature of life was very much a feature of Sendak's art for Leoš Janáček's Cunning Little Vixen. This opera has comic elements, telling about the life and misadventures of a fox, Vixen Sharp-ears. The real theme, however, is the life-cycle of all creatures, in this case a fox. Perhaps, it was for that reason that Sendak agreed to add this little-known opera to his already overflowing work schedule in 1981. 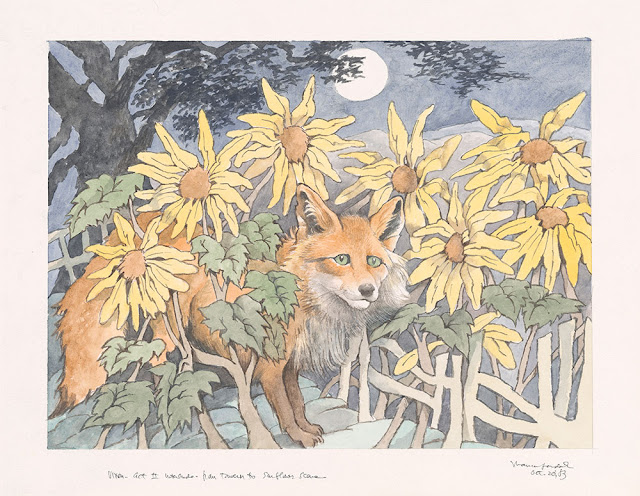 Maurice Sendak, The Edge of the Forest, interlude between Act II, scene 2 and 3,
for The Cunning Little Vixen, 1983

The art which Sendax created for Cunning Little Vixen is at once naturalistic and dreamlike. Vixen Sharp-ears, as Sendak sees her, is a creature from the real world and from the realm of the imagination.

This leads us to consider Sendak's motives in adapting his style of art to the theater. Was he attempting to adapt his books and his vision to the conventions of the theater? Or was he aiming at something more subtle and profound? 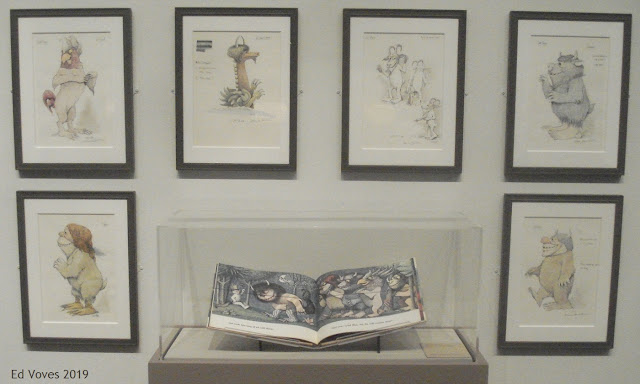 Ed Voves, Photo (2019)
Costume designs by Maurice Sendak for the Where the Wild Things Are opera
A copy of the 1963 book appears at center

Life imitates art, as the old saying goes - and vice versa. Personally, I think that Sendak was striving to reach the unexplored country where imagination and reality are one and the same. I also think he reached that goal.

Tony Kushner, playwrite, friend and biographer of Sendak, wrote a superb book on the artist's late-career. Kushner's book is essential for understanding this phase of Sendak's work, but also for how it was based on his earlier achievements as an artist/writer for children. Here is a very astute comment from the book:

It is only on the stage that Sendak characters actually move among Sendak forests, houses and ruins. And yet there’s a curious thing about his designs. These are not polite sets, nor recessive, not background: they challenge, they crowd up against the theatrical event, as the best designs do. But for all their depth, sound, and motion, for all their atmospherically evocative power, they evoke nothing more powerful than do the book illustrations of Maurice Sendak.


Sendak, in his "second" act, continued on the same visionary, unconventional and challenging path of his first career. Like most explorers, he brought a lot of baggage with him on the journey, but it proved to be very adaptable to his "brave new world." 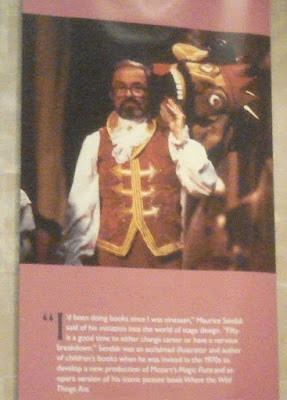 In closing, I would like to thank the Morgan Library and Museum for presenting Drawing the Curtain: Maurice Sendak's Design for Opera and Ballet. It helped me relive one of the peak experiences of my life, interviewing Sendak by phone for an article I wrote for the Philadelphia Daily News in 1995. I later met him at the Rosenbach Library in Philadelphia which was presenting an exhibit of his art work. It was a moment to cherish and so is a visit to this inspiring, life-affirming exhibition at the Morgan.

***
Text: Copyright of Ed Voves, all rights reserved
Images courtesy of the  Morgan Library and Museum

Maurice Sendak (American, 1928-2012), Study for Wild Things costume, with notes (Where the Wild Things Are), 1979. Watercolor, pen and ink, and graphite pencil on paper.
© The Maurice Sendak Foundation. The Morgan Library & Museum, Bequest of Maurice Sendak, 2013.103:19. Photography by Janny Chiu

Ed Voves, Photo (2019) View of the entrance of the Morgan Library & Museum exhibition, Drawing the Curtain: Maurice Sendak's Designs for Opera and Ballet. The costumes shown here are the Owl from The Cunning Little Vixen and Tiger Boy from The Nutcracker.

Ed Voves, Photo (2019) Two views of a diorama by Maurice Sendak for the Frank Corso production of The Magic Flute (1980). On view at the Maurice Sendak exhibit at the Morgan Library & Museum.

Ed Voves, Photo (2019) Gallery view of the Morgan Library & Museum exhibition, Drawing the Curtain: Maurice Sendak's Designs for Opera and Ballet. Photo shows Maurice Sendak's costumes for the opera version of Where the Wild Things Are and a copy of the 1963 book.

Ed Voves, Photo (2019) View of the entrance of the Morgan Library & Museum exhibition, Drawing the Curtain: Maurice Sendak's Designs for Opera and Ballet. Photo show a museum banner of Maurice Sendak wearing a costume from The Nutcracker.