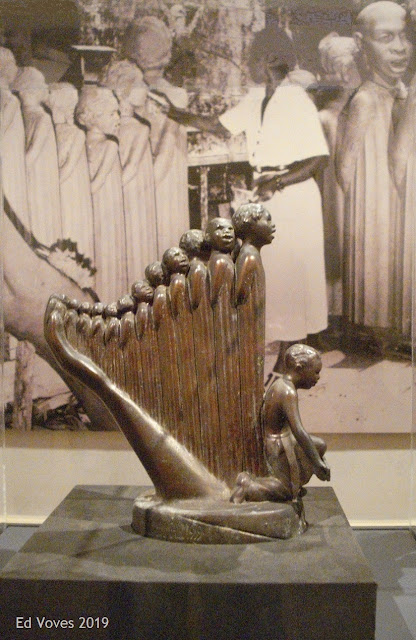 Augusta Savage (1892-1962) was one of the greatest artists affiliated with the Harlem Renaissance, the pivital moment of cultural awakening and racial equality during the 1920's and 1930's. Savage's impressive sculptural work literally embodied the ideas and ideals of the distinguished literary figures of the Harlem movement, such as Alain Locke and Langston Hughes.

The use of the term "Renaissance" is also fitting since Savage inspired, taught or mentored many fellow African-American artists who carried on her work during the years of the Civil Rights Movement and beyond. Savage was a Renaissance master as Andrea del Verrocchio and Luca della Robbia had been during the 1400's, passing on skill, knowledge and enthusiasm to students and aspiring artists. Gwendolyn Knight, Jacob Lawrence and Norman Lewis were just a few of the African-American artists who acknowledged their debt to Savage. 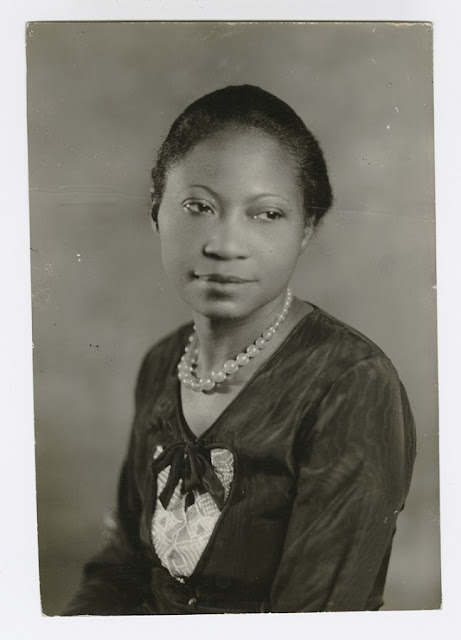 Augusta Savage recognized that the legacy she passed on to the post-Harlem Renaissance generation might well be more valued than her actual art.

"I have created nothing really beautiful, really lasting," Savage declared in 1935, "but if I can inspire one of these youngsters to develop the talent I know they possess, then my monument will be in their work."

Augusta Savage's self-criticism was much too harsh, as we can see in this remarkable exhibit. 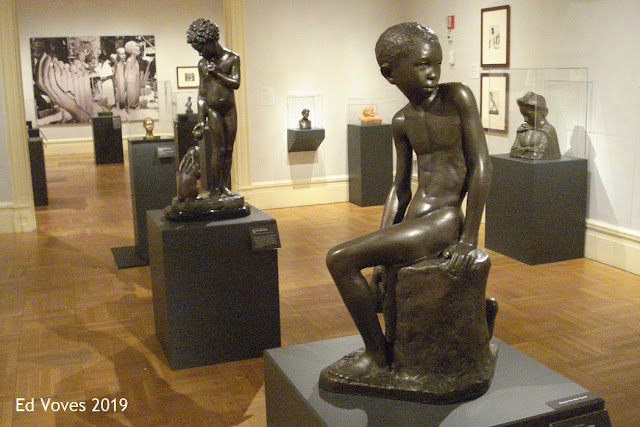 Augusta Savage: Renaissance Woman is a collaborative effort of the New York Historical Society (NYHS) and the Cummer Museum of Art in Jacksonsville, Florida. The exhibition curators have assembled a remarkable array of Savage's oeuvre, as well as photographs and letters exploring her singular career.

This is also an exhibition which documents the "collective" story of twentieth century  African-American artists. Taking their lead from Savage, painters and sculptors like William Artis smashed the barriers of racial prejudice and asserted their creative talent. Signature works by these artists, whom Savage inspired, are prominently displayed in the exhibition. 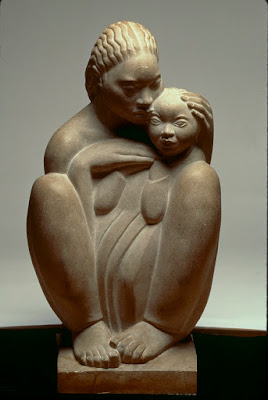 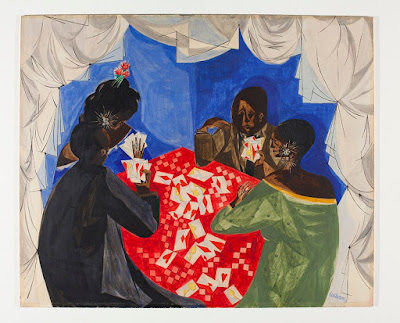 Savage's greatest work of art is conspicuous by its absence - physical absence that is. The spiritual resonance of Savage's The Harp, conveyed by a large format photo and a much smaller bronze version is so palpable that you will swear that the original is  on view at the NYHS. 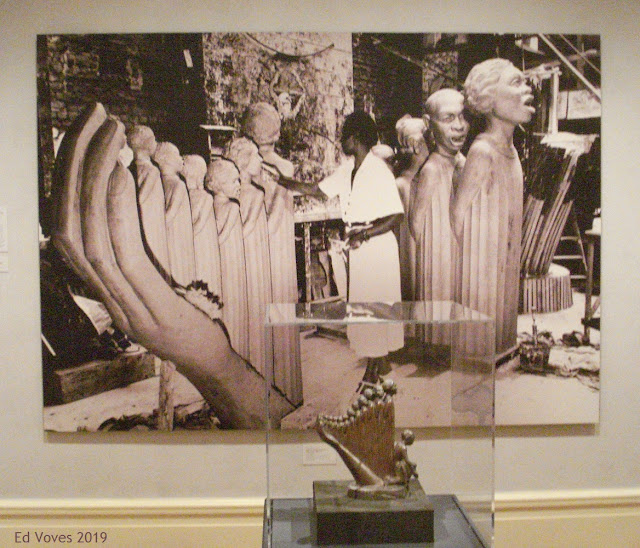 After nearly two decades of struggle in the New York art scene, Savage enjoyed a hard-won moment of success when she was selected to create a monumental sculpture for the 1939 New York World's Fair. The Harp was inspired by the hymn, Lift Every Voice and Sing, and took nearly two years to complete. Like most of the art made for the 1939 World's Fair, The Harp was subsequently destroyed. Yet, it continues to dominate the NYHS exhibit gallery by the sheer memory of its brilliance.

Such is the power of art - and the will to create art.

Augusta Savage's art sprang from the red clay of Florida which she modeled into figurines and small portraits. Savage's father, a Methodist minister, was infuriated at her disregard for the Biblical injunction against making "graven images."

"My father licked me four or five times a week," Savage later recalled, "and almost whipped all the art out of me."

Almost but not quite. Savage's early life was marked by great travail. She was married three times, two husbands dying young, the third marriage ending in divorce. In 1919, she won a prize at the West Palm Beach County Fair for a sculpture group. This success revived her determination to achieve a career in the arts. She joined the Great Migration to the north, arriving in New York City in 1921 with $4.60 in her purse.

Taking a job as an apartment house caretaker, Savage enrolled in the Cooper Union School of Art. Her skill and work ethic enabled her to complete the four-year course in three years. Savage next gained a scholarship from the Fontainebleau School of Fine Arts to study in France. Then, when the American officials selecting students for Fontainebleu discovered that Savage was "colored," the scholarship was cancelled.

Savage's disgraceful treatment by these Fontainebleau administrators was quickly noted by the redoubtable W.E.B. Du Bois. Launching a crusade on her behalf in the NAACP magazine, The Crisis, Du Bois directly challenged the Fontainebleau trustees. Responding to Du Bois' relentless criticism, J. Monroe Hewlett lamely replied that the rejection of Savage to travel and study in Europe "was due quite as much to consideration for her as to any other thought or feeling."

Unable to get the Fontainbleau decision reversed, Du Bois continued to advocate Savage's right to a scholarship to Europe. Eventually, in 1929, the Julius Rosenwald Fund awarded Savage a two-year scholarship to study in France. Six years had been lost, however. As David Levering Lewis, Du Bois' biographer, astutely noted the "steep learning curve" of Savage, now aged 37, "would have begun to flatten after so much time wasted waiting and deprived of expert mentoring."

This perceptive remark needs to be considered in relation to Savage's already sensational talent. There can be no doubt as to the exceptional level of her skill and to her determination to create realistic portraits of African-Americans. These likenesses exude self-awareness and pride - of artist and subject - quite at odds with the caricatures or patronizing stereotypes of African-Americans in the mainstream media of the 1920's. 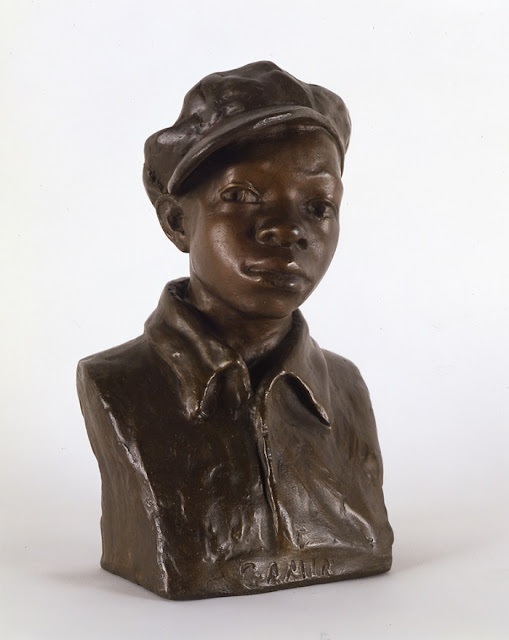 Savage's Gamin is a case in point. This portrait of a young African-American boy was the piece submitted with the application for the Rosenwald scholarship. Savage used her nephew as the model, creating a work that succeeds as a unique portrait and as an idealization of African-American identity. The Rosenwald judges were so impressed that they increased Savage's scholarship stipend from $1,500 to $1,800.

Gamin is Savage's most famous surviving work, but I was even more impressed with a later piece, from the collection of the Museum of Fine Arts in Boston, Portrait of John Henry. 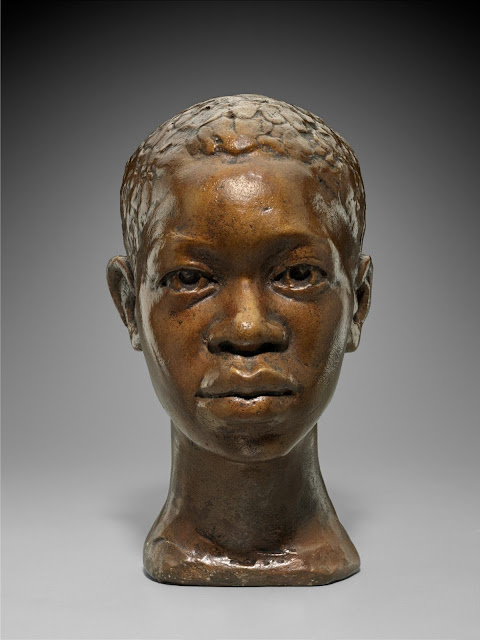 Portrait of John Henry was created around 1940 and shows Savage at the height of her powers. It is an exceptional work, establishing a living presence even in an exhibition gallery crowded with other masterpieces. The eyes of John Henry, often the most problematical element of a portrait sculpture, sparkle with life force and intelligence.

There is a shadow to Portrait of John Henry. This work represents the peak of Savage's artistic career. From 1940 on, the number of works created by Savage dwindled and after a few years all but stopped. The reasons for this are complex and need to be addressed in some detail.

The year 1940 should have marked another upward thrust in Savage's career trajectory - and she had every to believe so.

After returning from studying in France in 1932, Savage established the Savage Studio of Arts and Crafts in Harlem, offering free art classes. Savage's community-based focus secured her the appointment as the first director of the Harlem Community Art Center, funded by the W.P.A., in 1937. In 1939, with The Harp gaining acclaim at the World's Fair, Savage opened the first African-American art gallery, the Salon of Contemporary Negro Art, with a major exhibition, June 8th to June 22nd, 1939. 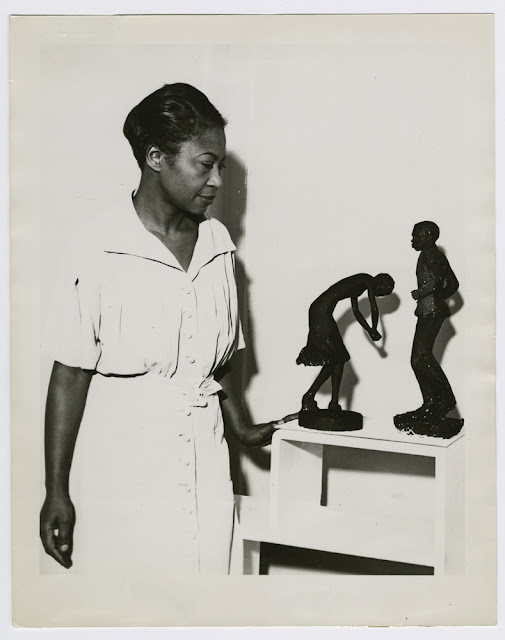 This moment of triumph, following so much dedicated work, quickly vanished. Instead of being Savage's "breakout" year, 1940 saw the breakdown of her career. The Salon of Contemporary Negro Art soon closed for lack of support and Savage was sidelined from her directorship of the Harlem Community Art Center. Savage did not even have enough funds to place The Harp in storage until it could be cast in bronze and sold to a museum.
As a result, The Harp was destroyed when the World's Fair closed in 1940.

Savage's career went into an eclipse from which she never really recovered. Most African-Americans during the 1940's lacked the degree of affluence to collect the art on view at the Salon of Contemporary Negro Art. Sympathetic White supporters increasingly became focused on charitable work related to the Second World War. Those who continued to collect art in the 1940's increasingly looked to Abstract Expressionism, what would soon be called the New York School. 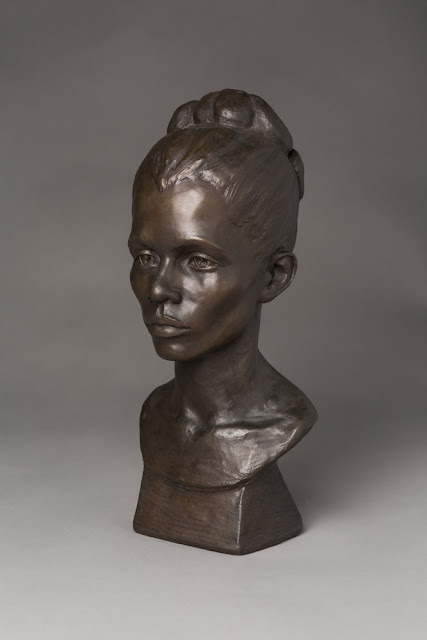 After struggling against poverty and racism, Augusta Savage fell victim to the impact of Modernism on American art. Indeed, she had experienced a premonition of this threat years before.

Lewis, in his biography of Du Bois, recounted how Savage, when considered for a scholarship to Italy in 1926, discovered that the tide of opinion in the art world was shifting from her traditional handling of the human body to more avant garde styles. Savage wrote to Du Bois about the reaction of the Italian countess who interviewed her.

"I think she was a trifle disappointed to find that I am a realist instead of a modernist," Savage informed Du Bois.

In 1940, the Nazi Blitzkrieg sent a wave of refugee European modernists to the United States. Many young American artists began to follow the lead of Piet Mondrian and Fernand Leger. Realist art, especially in sculpture, lost out to Surrealism and "Ab-Ex."

Augusta Savage, along with artists like Malvina Hoffman, another brilliant woman realist sculptor, were casualties of this shift in technique and taste. Hoffman continued to receive some major, war-monument commissions. Interest in Savage's work evaporated. 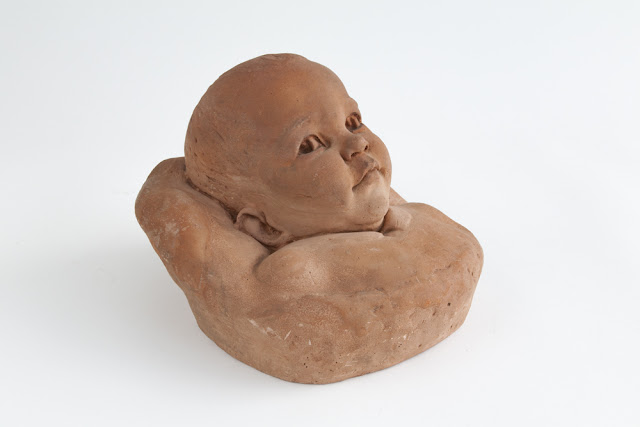 Of great poignancy, one of the last of Savage's pieces on view in the New York Historical Society exhibition is a portrait of an unnamed baby. This supremely accomplished work of art was created in terracotta, unlike the plaster and bronze which Savage used on most of her other sculptures. Portrait of a Baby recalls the red clay that the young artist had first grasped in her fingers long years before.

Augusta Savage, like Zora Neale Hurston, experienced decades of obscurity after a few fleeting moments of success during the 1930's. Hopefully, just as Hurston's literary accomplishments are now recognized, so will Augusta Savage's achievements as an artist and a teacher finally receive their due.

Augusta Savage: Renaissance Woman at the New York Historical Society is certainly a big step forward in her "renaissance" as a major figure in American art.

Introductory Image:
Ed Voves, Photo (2019) Gallery view of the Augusta Savage: Renaissance Woman, exhibition at the the New York Historical Society. A miniature bronze version of The Harp is displayed in front of a photograph of Augusta Savage working on the original. The photograph is from the New York Public Library (NYPL), Manuscript and Archives Division, Astor, Lenox and Tilden Foundations, New York Worlds Fair 1939-40 Records, 1654255

Posted by Art Eyewitness at 9:53 AM