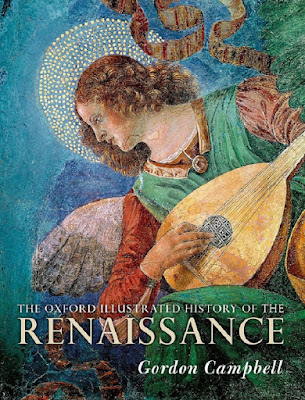 The Oxford Illustrated History of the Renaissance

Andy Warhol and the Renaissance of the 1400's-!500's seldom occupy the same paragraph in art history books or essays. Yet as I finished reading The Oxford Illustrated History of the Renaissance, Warhol's famous (or infamous) prediction came to mind.

"In the future, everyone will be world-famous for fifteen minutes."

Since the fame of Leonardo, Michelangelo and Durer has lasted a lot longer than a quarter of an hour, my reflection on Warhol's statement seemed little more than a random thought. But as I reread some of the especially cogent passages of the Oxford volume, the following statement seemed a likely candidate for having directed my thoughts in Warhol's direction.

The proliferation of images and texts brought about by the invention of printing (c.1440) confirm that the Renaissance experienced a revolution comparable in magnitude to the recent emergence of the Internet. The word 'selfie' is recent but the Renaissance brought about and developed the self-portrait and the portrait. 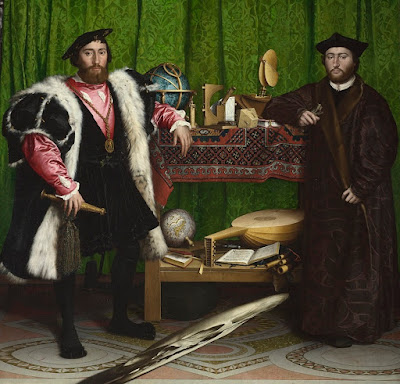 The Renaissance was marked by world-changing inventions like movable-print and realistic portrait painting. These in turn facilitated the emergence of "the sense of the self in the world." During this long-ago era, the seeds of modern individualism were planted. Whether our opportunity for fame lasts fifteen minutes or five centuries, the debt we owe to the "brave new world" of the Renaissance is considerable.

The Oxford Illustrated History of the Renaissance is the latest in an outstanding series of books dating back to the 1980's. Based on the latest historical research but aimed at the general reader, the Oxford "Illustrated's" have maintained a very high standard over the years. This volume, edited by the great Renaissance scholar, Gordon Campbell, certainly maintains the Oxford University Press reputation for excellence.

Among the historians recruited to write this authoritative book is Felipe Fernández-Armesto, who edited The Oxford Illustrated History of the World, reviewed earlier this year in Art Eyewitness. The chapter written by Fernández-Armesto deals with the global impact of the Renaissance. With his usual verve and command of the historical source material, Fernández-Armesto investigates the way that interconnected bonds were forged between far-flung nations and societies.

The process of globalization was very slow during the 1400's and early 1500's, being contingent more on mariners' understanding of the trajectory of the "trade winds" than of strategic planning by the governments of Europe.

"The history of the world, as traditionally written," Fernández-Armesto wryly observes, "contains too much hot air and not enough wind." 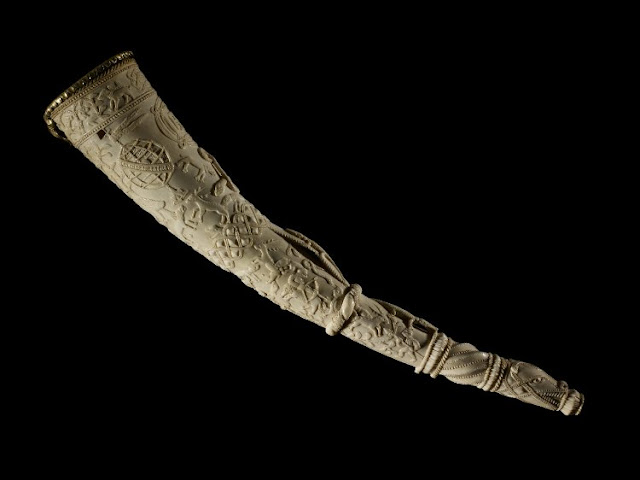 The carved ivory horn, shown above, illustrates this world-wide perspective on the Renaissance. It was made in Africa for the European market and taken back by Portuguese maritime traders. The base of the horn shows an armillary sphere, the Coat of Arms of the Portuguese royal house and the cross of Beja. Scenes of Europeans and Africans fighting and hunting animals are also featured.

If the global trade had been limited to exotic products such as this ivory horn, the world  would be a different place today. Vast hauls of treasure from the New World, chiefly silver, flowed into the Spanish treasury and flowed right out again. The "King's Fifth" was used chiefly to purchase weapons, especially gunpowder-firing cannon, state-of-the-art warships and elaborate fortifications capable of resisting the formidable armies and fleets of the rival Valois French monarchy and  the Ottoman Turks. There is an instructive chapter on the Renaissance "arms-race" written by David Parrott in the Oxford volume. 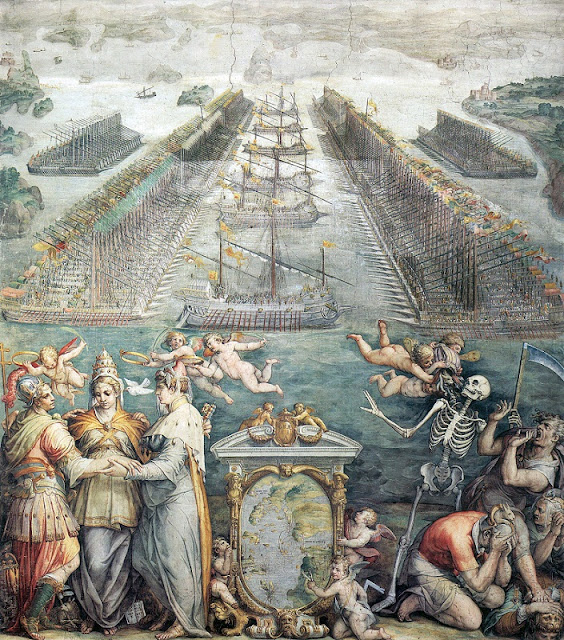 Giorgio Vasari, The Battle of Lepanto, 1572

If the Renaissance witnessed endemic warfare, the growth of a world-wide slave trade (with plenty of guilt to share among all the participants of this "trafficking of souls") and social repression in most European societies, can we really justify the claim that a "Renaissance" actually took place? Or is such a claim more of the "hot air and not enough wind" which Fernández-Armesto derides?

It is the contention of the Oxford team that the Renaissance was indeed a revolutionary epoch in every field of creative endeavor. This was especially true in the visual arts, which we will focus upon shortly. The unpleasant aspects of the Renaissance are not brushed aside and the prevailing theme of the book is best summarized by Quiviger in the concluding remarks of his chapter:

Many scholars have observed that the ideals and values of the Renaissance are merely a sugar coating concealing the darker, violent, and ever present nature of men, driven by ambition and rivalry. Sugar coating is nevertheless a first step towards sweetening. This is simply a matter of not confusing a period with its ideals… Similarly, the ideals of good manners and elegance… may not have been the norms of their time but their European diffusion suggests that they did eventually have an impact upon the world.

The "sugar coating" which the Renaissance applied to European society and indirectly to the world was a long and complex process. Because we still see the results in art, architecture and literature produced during 1400's and 1500's, it is easy to miss two fundamental points.

Most of the texts used by Renaissance scholars were available only because "Dark Age" scribes, many of them Irish monks, had preserved them. If a manuscript copy of a Latin text survived to the ninth century, as Peter Mack writes in his chapter on Renaissance humanism, it "was never truly lost again." Greek texts were similarly preserved in the Byzantine Empire and transmitted to Italy in the years prior to the fall of Constantinople in 1453. 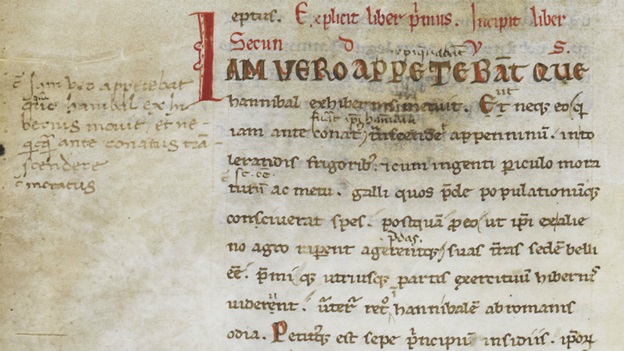 The "heroic" role of the Renaissance scholar was to rigorously organize and study what had been salvaged from ancient times and to disseminate this "new" knowledge all over Europe. Humanism, as the new scholarship was called, had commenced decades before the first use of the printing press in the early 1450's. We can see Humanism in action on the manuscript pages of the Roman history of Livy, personally copied and corrected by Petrarch (1304-1374) and further annotated by Lorenzo Valla (1407-1457).

Secondly, the artistic revolution of depicting Jesus, the Virgin Mary and other saintly figures with flesh and blood naturalism was another Medieval development. The preaching of St. Francis of Assisi (1181-1226) and his followers, the Franciscans, emphasized the humanity of Jesus and the need for Christians to practice levels of devotion that reflected the sufferings of Jesus and the Christian martyrs.

The preaching of the Franciscans called for "art that bleeds" as Andrew Graham-Dixon memorably described in his wonderful book, Renaissance. Artists, both in Italy and Flanders, complied with alacrity. 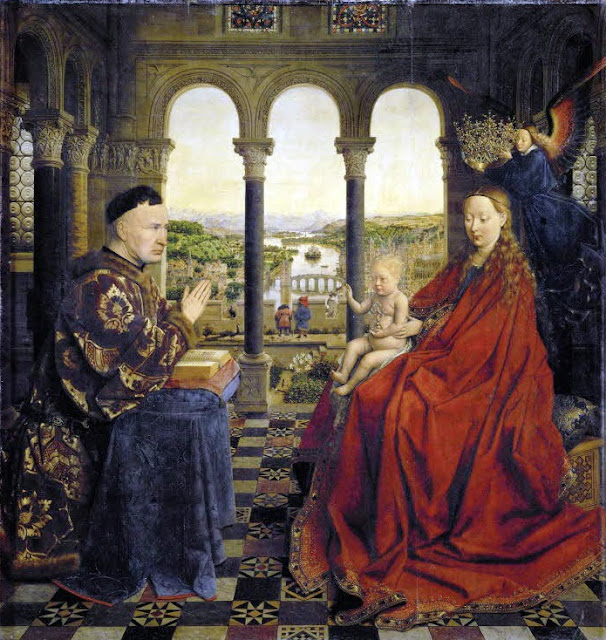 It was the Flemish who took the key step of transferring the naturalism used in portraying Jesus, Mary and the Apostles to portraits of Christian believers. Special attention was given to those willing to pay to be included in the picture, like Chancellor Rolin of Burgundy, shown above. But the real breakthrough came about when Italian merchants working in Flanders, like Tommaso Portinari, commissioned paintings showing them and their wives praying before Jesus and his mother.

Prior to the arrival in Italy of these oil paintings from Flanders, Italian artists had been exploring other aspects of art, such as creating a sense of visual space through the use of linear perspective. Portraits in Italy were chiefly done in profile, because of the obsession with collecting ancient Roman coins. Of deeply-probing psychological insight, there was precious little. When the portraits by Flemish masters like Jan van Eyck and Hans Memling reached Italy, the effect was dramatic. 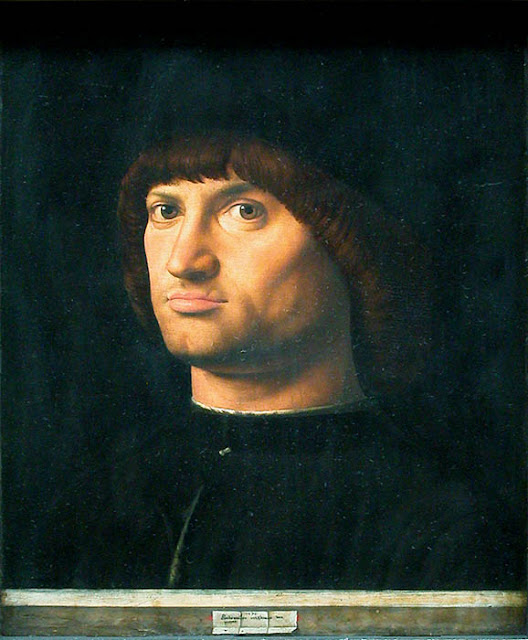 In this sensational portrait by Antonello da Messina, we can see the result. This incredible work is the perfect embodiment of the Renaissance "sense of the self in the world."

Antonello may have learned oil painting from an itinerant Flemish painter at the court of the Kingdom of Naples. However he acquired the techniques of the Flemish masters, Antonello soon matched them in the ability to probe the human soul and to portray the result on canvas or panel.

The age of Individualism had dawned. 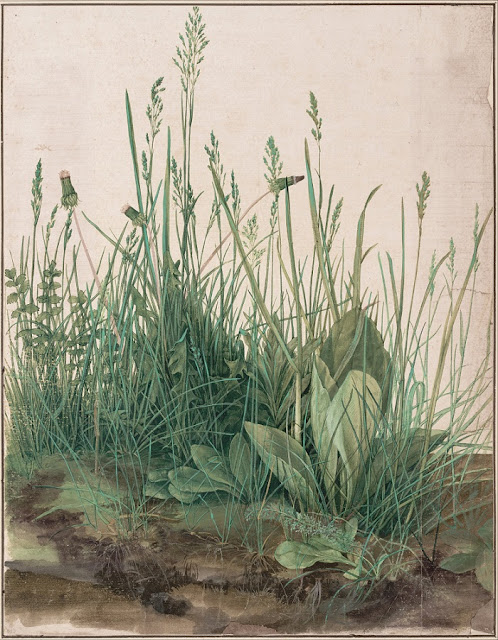 The techniques of close investigation of human character began to be applied to the study of nature, stunningly revealed in Durer's Large Piece of Turf. Soon the new critical thinking and observation was being trained on the stars and planets, leading to Copernicus' challenge to traditional, earth-centered astronomy. The Oxford volume includes a chapter filled with insightful analysis of the Scientific Revolution which ultimately was the most momentous result of the Renaissance.

Just about every facet of life in Europe was affected by the "new" learning and meticulous tinkering which the Renaissance engendered. This extended even to special techniques for folding napkins at banquets into the shape of animals, ships and castles! This too is described in The Oxford Illustrated History of the Renaissance.

The Oxford volume, however, does not cover in great detail the famous incidents in the careers of the titans of Renaissance art. Leonardo, Michelangelo, Raphael, Durer and Titian do make appearances in the book and their art works are considered in the broad context of Renaissance civilization. Two chapters provide a solid foundation to the study of Italian art (written by Francis Ames-Lewis) and the Northern Renaissance (Paula Nuttall and Richard Williams).

Most of the familiar and fascinating events, feuds, etc. are not featured. No mention of screaming matches between Michelangelo and Pope Julius II. Discussion of Italian art ends for the most part with the death of Raphael in 1520.

I can see the point of Gordon Campbell and his team of Renaissance scholars, given the global framework of this outstanding book. There is so much ground to cover and it makes sense to concentrate on the factors that created the Renaissance "sense of the self in the world."

Never-the-less, reading The Oxford Illustrated History of the Renaissance has placed me in a perplexing situation not unlike that faced by the actor, Bill Murray, in the movie Groundhog Day!

My very first exposure to Renaissance art ended - as does the corresponding chapter of the Oxford book - with Italian art in the early 1500's. Way back in the 1970's, I took an undergrad course in Renaissance art. The professor was so smitten with Brunelleschi, Donatello  and other Quattrocento masters that we ran out of time. When the course ended, Leonardo was still waiting for the paint to dry on The Last Supper.

Hopefully, Oxford University Press will publish an Illustrated History of the Later Renaissance and I will finally discover what happened to Michelangelo.

Giorgio Vasari (Italian,1511–1574) The Battle of Lepanto, 1572. Fresco in the Sala Regia of the Vatican.
https://commons.wikimedia.org/wiki/File:Giorgio-vasari-battle-of-lepanto.jpg