We the People: American Prints from between the World Wars at the Philadelphia Museum of Art 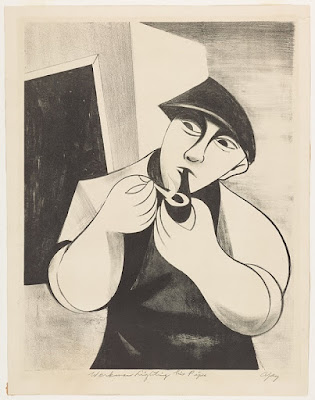 We the People: American Prints from between the World Wars

The 1930's in the United States were a "black and white" time. It is hard to think of this grim but fascinating decade except in terms of black and white photos, newsreels and  feature films. Almost all of the indelible images of the Thirties were in black and white, most notably the  art print culture that flourished to a remarkable degree during the Great Depression.

The Philadelphia Museum of Art's exhibition, We the People: American Prints from between the World Wars, looks at printmaking during the 1930's with a wide focus. Politics and economics provided the theme of many Thirties prints - but not all. Indeed, many of the most potent social images from that decade did so from a subtle, indirect point of view.

Visitors to We the People are enabled to grasp the tremendous range of American printmaking. The works on view were collected by Fern and Hersh Cohen, who generously donated their collection to the Philadelphia Museum of Art. The Cohens really deserve great praise because they collected many lesser known print-makers who often do not make it into art exhibitions, including The Urban Scene which was shown at the National Gallery in 2017. 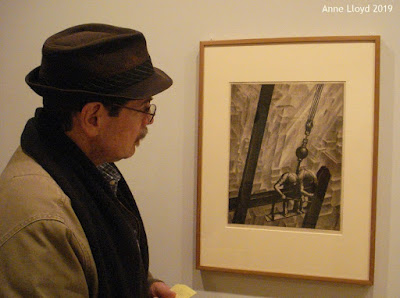 We the People is an important, insightful survey of the Depression decade because these prints reveal how the print makers, masters of their art, yet common citizens, felt about the times in which they lived.

Perhaps surprisingly, there is a good bit of humor in these "Depression" prints. The jaunty workman lighting his pipe in the introductory image to this essay recalls the constant stream of jokes about workers for the W.P.A. (Works Progress Administration) leaning on their shovels. In 1939, the same year that Abe Ajay created this lithograph, a "lean on your shovel" skit was included in the musical, Sing for your Supper.

A comparison of two of the prints in We the People highlights the wide-spectrum of artistic presentation and technique. In this case, we see the point-counter-point of the  obvious in art versus the quietly subversive. 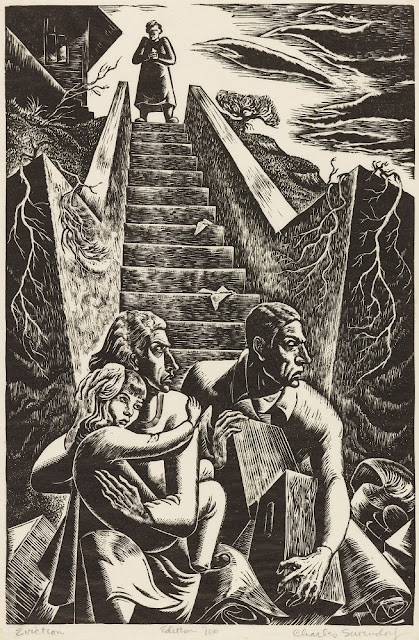 In this visually striking woodcut, Charles Frederick Surendorf (1906-1979) depicted an experience familiar to many American families during the Depression. He did so with a cinematic verve which could readily be appreciated by a generation which had grown-up going to the movies. Yet the very drama of the scene, with the heartless landlady towering over the now homeless family, has too much of a Grimm fairy tale aspect to really convey the grim reality of Depression-era eviction. 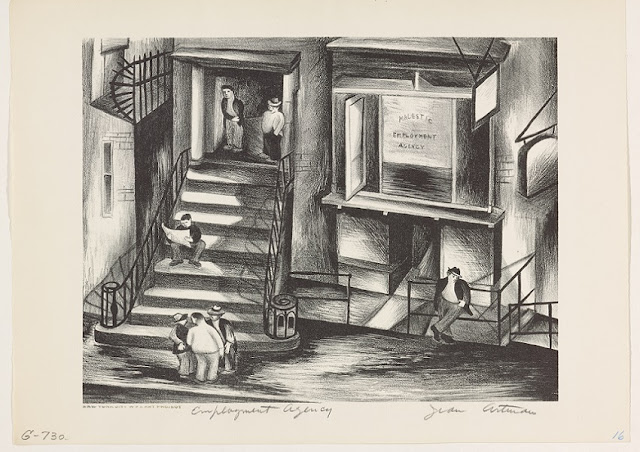 By contrast, Jean Artman's Employment Agency is almost devoid of action. It has a comic element to it, like a New Yorker cartoon. There are seven men in the picture but only one is doing anything. This is the forlorn figure at the top of the staircase, fruitlessly searching his pocket for a coin or a bus token. Nobody is moving toward the front door of the "Majestic" Employment Agency. Why bother to ask about available jobs? Nobody was hiring.

There was a tremendous range of theme and topical handling in Depression-era American prints. The level of mastery of the several techniques of printmaking - woodcut, etching and lithography - was little short of amazing. 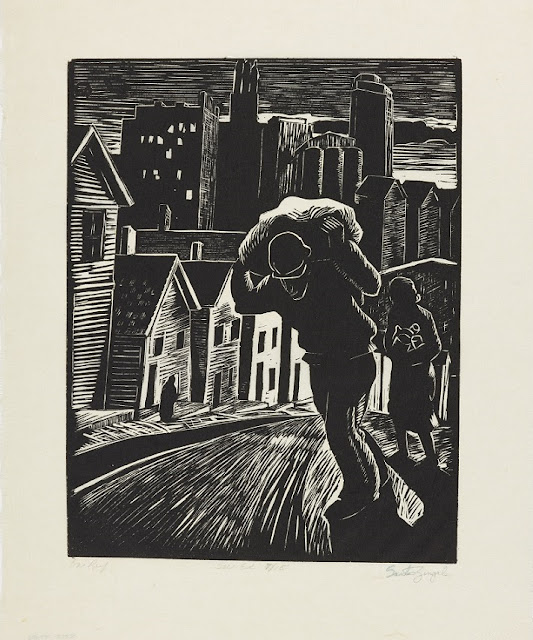 Santos Zingale, On Relief, around 1937

Santos Zingale, despite his "foreign" sounding name, was "as American as apple pie." Born in Milwaukee, Zingale spent his whole life working and teaching in Wisconsin, except for World War II service in the Navy. Regionalism, a "return" to the authentic America was another defining attribute of "The Thirties." Zingale was a leading exponent.

On Relief, a haunting woodcut Zingale created  around 1937, has a title drenched in irony. The homeless couple, staggered under the load of their meager possessions, are strangers to "relief," whether it was a government subsidy or the feeling of hope that the Depression was ending. In fact, the  U.S. economy took a nosedive in 1937-38 as the global political situation worsened with the approach of World War II.

Almost all the themes of We the People can be seen in Zingale's woodcut. From the skyscrapers looming over the tumbledown wooden dwellings to the nightmare reflections of many that the American Dream was dead or dying, On Relief is a visceral summation of of American art of the 1930's.

Zingale fought with skill and courage to prove that the American Dream was alive. So too, did Surendorf, Artman and other Regionalist artists whose works are included in the exhibition.  All owed a debt of inspiration to the champion of American regionalism, Thomas Hart Benton.

We were all in revolt against the unhappy effects which the Armory Show of 1913 had had on American painting. We objected to the new Parisian aesthetics which was more and more turning away from the living world of active men and women into an academic world of empty pattern. We wanted an American art which was not empty, and we believed that only by turning the formative process of art back again to meaningful subject matter, in our cases specifically American subject matter, could we expect to get one. 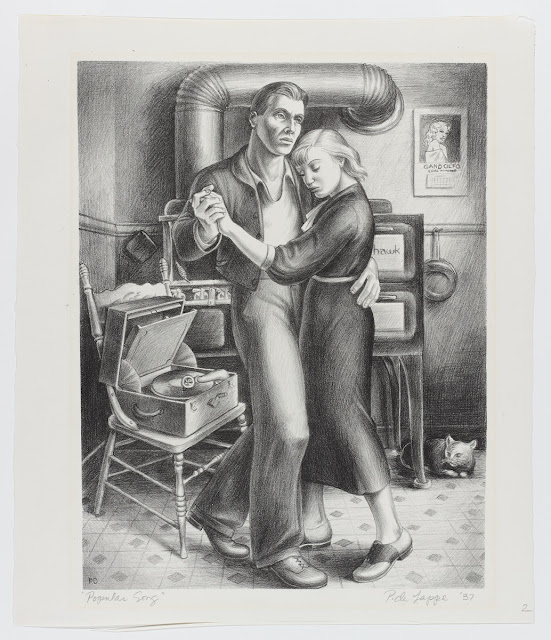 Popular Song by Phyllis (Pele) DeLappe (1916-2007) is a fine example of how an artist  could endorse Benton's call to return American art to "the living world of active men and women."

In this lithograph, DeLappe presented an endearing and ennobling portrait of a young couple dancing to a tune on their record player. There is no revolutionary agenda here, despite DeLappe's left-wing political views. There are just two tired people trying to be happy. DeLappe balances the stoic, far-away expression on the man's face with the closed-eyes and tilted head of the woman. He gazes on the uncertain, unknowable future; she shuts it out, trying to enjoy the precious moment they are sharing.

“The living world of active men and women” was marked by uncertainty and tribulation as evoked in DeLappe’s print. So too was the Regionalist art movement as a whole.

Many leading American scholars like Vernon Parrington and Lewis Mumford championed the concept of American Regionalism. The quality of the prints which attempted to establish a visual identity for Regionalism was often of the highest merit. But Regionalism struggled with the widespread belief that it was a backward looking, nostalgia-driven movement.

Jackson Lee Nesbitt’s career is indicative of the eventual eclipse of Regionalism. Born in Oklahoma in 1913, Nesbitt was a protégé and close friend of Thomas Hart Benton. Nesbitt succeeded in creating prints which showed the modern realities, as well as the local distinctiveness, of Midwest America. Yet, after many years of trying, Nesbitt gave-up his career in the arts to establish an advertising firm in Atlanta. After retiring in the late 1980’s, Nesbitt returned to printmaking with the same sensational results.

Nesbitt’s 1941 etching, Goin to Town, showcases his skill – and his vision - at the high point of his career. 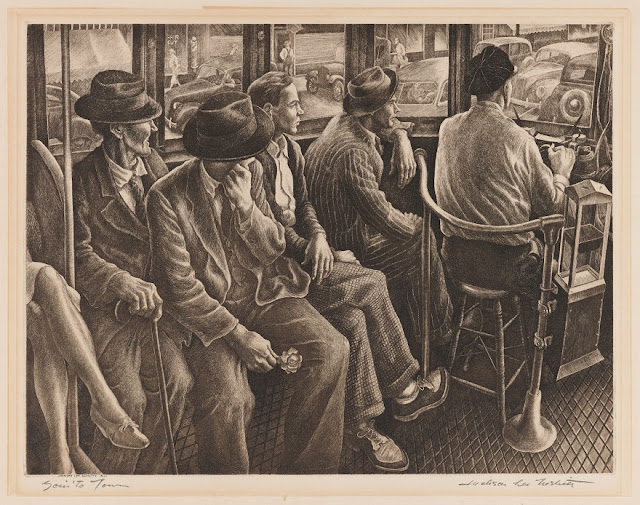 At first glance, one might wonder why Nesbitt would  have gone to the trouble of creating an etching of streetcar riders in Kansas City when Walker Evans was using a hidden 35 mm camera to do essentially the same thing on New York City subways. Keep studying Goin to Town, however, and you will realize that Nesbitt created a sense of community with this print in contrast to Evan’s isolated subway riders, alone in a crowd.

Nesbitt portrayed modern-day citizens of Kansas City, not “hayseeds” or “hillbillies.”  They are real “honest to goodness” city dwellers, wearing rumpled suits and weather-beaten hats. Nesbitt’s streetcar riders make their way to work or market with the same kind of resolve that would be seen on the faces of American GIs on landing craft headed to the shores of Omaha Beach.

Sadly, the sale of Nesbitt’s superb works of art declined and he opted for a career-change more in tune with the post-war economic boom: advertising.

The landscape of America's hinterland was not the only region menaced by the Depression. The urban environment of Victorian America came under the shadow of ominous forces, symbolized by "skyscrapers." These towering structures seemed to have personalities all their own, even as they blotted out the familiar landmarks of the great American cities. 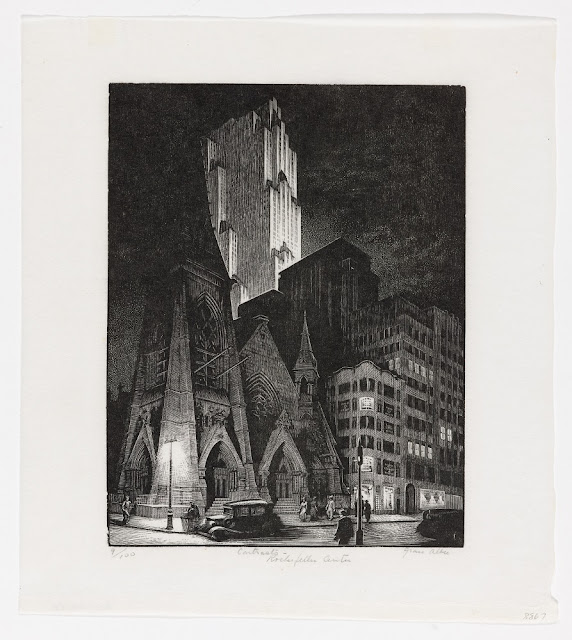 Grace Albee's woodcut, Contrasts, lived up to its name. St. Nicholas Collegiate Church appears in the foreground. This was the Dutch-Reformed Church which Theodore Roosevelt attended. Built in 1872, at Fifth Ave and 48th Street, it was one of New York's oldest and most beautiful churches, with a spire which was the tallest edifice in its vicinity. By the 1930's, St. Nicholas was surrounded by nondescript offices and shops, its spire now over-matched by the colossus of 30 Rockefeller Center looming behind it.

Albee, a prodigiously talented New England-born artist, was a master of both woodcuts and lithographs. Here she expertly used the former technique, emphasizing the shadowy recesses of the Gothic Revival architecture to accentuate the gloom of St. Nicholas' displacement by the Babel-like tower of Rockefeller Center.

These memorable lines from Tennyson's Idylls of the King were familiar to many Americans during the 1930's. Children were still taught to memorize and recite poetry in the early decades of the twentieth century. Certainly, the words "The old order changeth" captured the troubled, yet courageous, spirit of the American people during the Depression.

The Old Order in the U.S. did change. The New Deal did deliver on its promises to the American people, if not always as efficiently as was hoped.

The remarkable display of "Thirties" prints in We the People at the Philadelphia Museum of Art is a powerful reminder that hard times can bring out the best in people - and inspire great art.

***
Text: Copyright of Ed Voves. All rights reserved.
Images courtesy of the Philadelphia Museum of Art

Anne Lloyd, Photo (2019)  Gallery view of the We the People exhibition at the Philadelphia Museum of Art.  Samuel L. Margolies' Men of Steel, c.1939, is the print shown in the photo.

Posted by Art Eyewitness at 5:58 AM