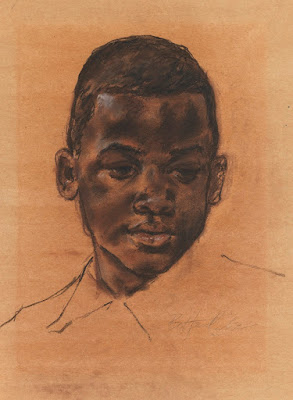 "Awakened in You": the Collection of Dr. Constance E. Clayton

There are so many reasons to celebrate the latest exhibition at the Pennsylvania Academy of the Fine Arts (PAFA) that it is hard to know where to start.

"Awakened in You" does not merely represent the opening of another landmark exhibition at the historic art school and museum. The 75 works on view are part of a major collection of paintings and sculptures by African American artists. The works of art selected for the exhibit will join the permanent collection of PAFA's museum once "Awakened in You" closes in July 2020. 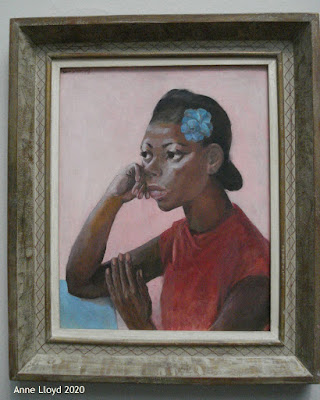 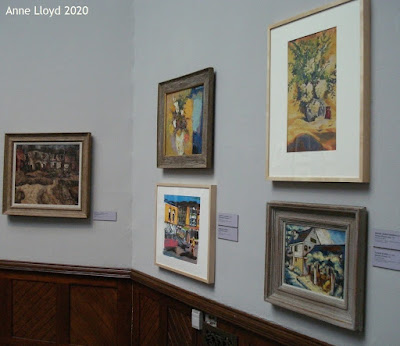 Anne Lloyd, Photo (2020)
Gallery view of the "Awakened in You" exhibition at PAFA

Any time a museum receives a major bequest like this, it is a truly significant event.

The magnitude of the "Awakened in You" collection is enhanced by the fact that it represents an African American success story demonstrating the importance of inspired community leadership in the arts. The exhibition also testifies links to PAFA's commendable role in aiding and encouraging African American artists.

The "Awakened in You" paintings and sculptures were collected by Dr. Constance Clayton, who was the Superintendent of the School District of Philadelphia from 1982 to 1993. Born and raised in Philadelphia, Dr. Clayton was the first African American and the first woman to take on the challenge of directing the city’s schools.

With the aid of her mother, Mrs. Williabell Clayton, Dr. Clayton set about building a collection which would document the great achievements of African Americans in the visual arts.  From the post-Civil War landscapes of Edward Bannister (1828-1901) to Romare Bearden's bold reworking of Classical mythology in the light of the African American experience, virtually every significant African American artist is represented in "Awakened in You." 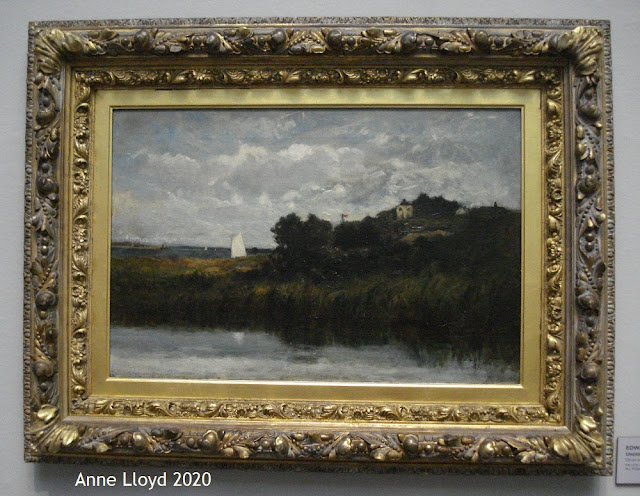 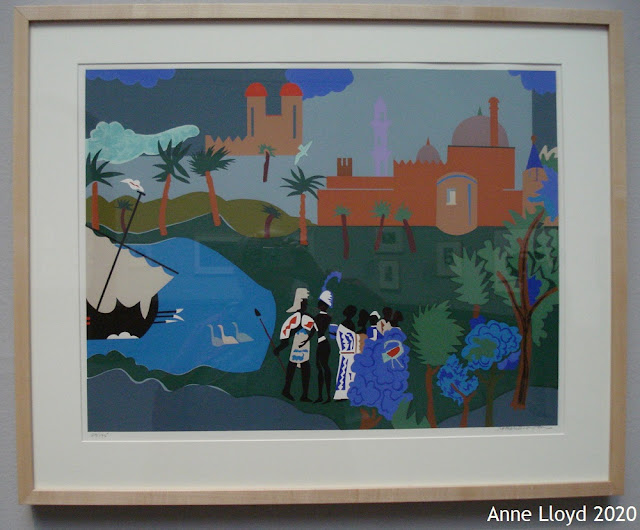 As a measure indicative of just how important the donation of the "Awakened in You" collection is to PAFA, Dr. David Brigham, President and CEO of PAFA, and Brooke Davis Anderson, Director of the PAFA Museum, served as the curators of this exhibition.
Perhaps even more significantly, the exhibition team included Ms. Sarah Spencer, a charismatic and knowledgeable assistant curator. 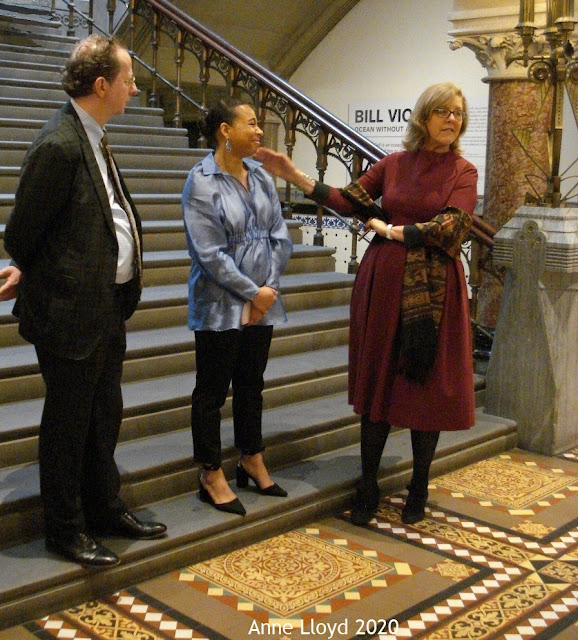 In their introductory remarks, Brigham and Anderson stressed the importance of “mentoring” in the past practice and contemporary mission of PAFA. Mentoring is more than just teaching or passing the secrets of the “trade” to apprentice workers. Rather it is a process by which future leaders are accorded the opportunity to demonstrate their knowledge and skill. Judging from her dynamic participation in the press preview, Sarah Spencer has amply fulfilled her role in the “mentoring” process at PAFA and in the African American art community. 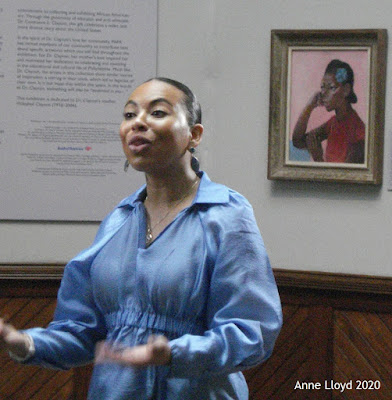 The display of magnificent paintings and sculptures collected by Dr. Clayton begins with a series of nature studies by a long time teacher at PAFA, Louis B. Sloan (1932-2008). These are displayed at the foot of the grand staircase of the PAFA Museum and at first glance appear to be conventional, “weekend” paintings. Indeed, some of them were painted on weekend art excursions when Sloan took student groups to the nearby Wissahickon Park, some of which is quite rugged terrain, and farther afield to more distant countryside around Philadelphia. 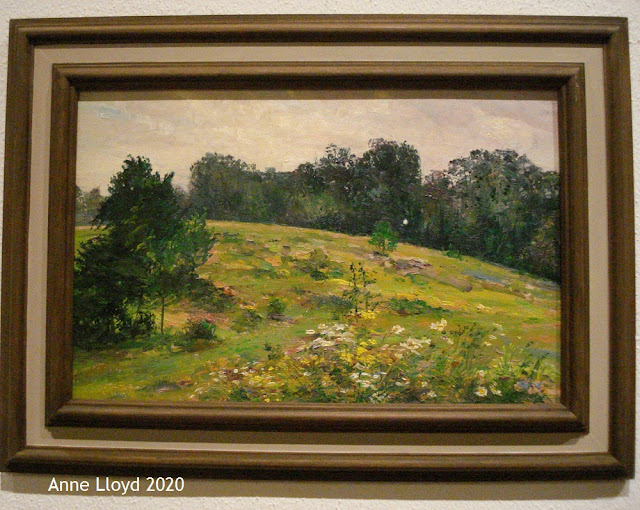 Sloan was a beloved teacher and a brilliant painter. His finished works ranged from highly accomplished realism in Backyards (1955) to the almost abstract landscape of Frost Valley in the Catskills (1995). Both of these works are part of PAFA's collection. I was astonished when I realized that this John Constable-like nature study had been painted by the artist who did the dazzling Frost Valley!

There a subtle message to the placement of Sloan’s small landscape series. Many of the artists included in the second floor exhibition galleries of “Awakened in You” were graduates of PAFA or had worked in the WPA art programs of the Depression-era Philadelphia. They had to establish their “creds” with works like these nature studies. No artist can claim a spot on the gallery walls of PAFA without climbing the “steps” of practice, experimentation, of inspiration-dripping with perspiration.

Upon entering the “Awakened in You” galleries, you quickly realize just how hard these African American artists worked and how brilliantly they integrated their life experience into the powerful works on view.

Among the first works on art on view in the exhibition galleries are portraits of family members and friends, testifying to bonds of love and relationship which enabled African Americans to endure privation and prejudice for so many years, indeed centuries.

Laura Wheeler Waring's engaging group portrait, Four Friends, painted around 1940, and Barkley Hendrick's Head of a Boy, which introduces this review, evoke childhood as close to an ideal state, yet tinged with a degree of melancholy. 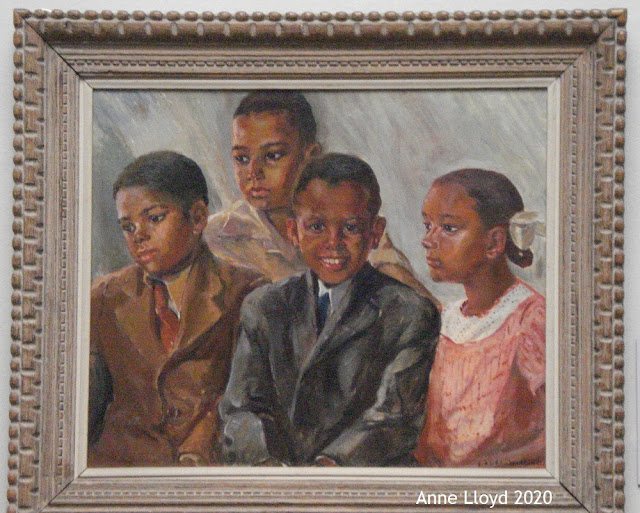 In the wall text which accompanies Four Friends, Sarah Spencer comments on the serious underlying message to what otherwise might be accounted an exercise in "mere" portrait painting. Spencer notes:

Four Friends celebrates Black youth and the innocence of childhood in a world that often sees Black children as a threat. Waring captures joy in its purest form, emphasizing its necessity for Black children’s survival and the ability to fully claim their humanity.

Beyond their evident charm, of these two works of art, assert the human dignity of the young people who posed for their portraits. These works - and many others collected by Dr. Clayton - challenge our preconceptions of the artists.

Barkley Hendricks later created his "brand" of art, bold, full-length portraits of cool, savvy men and women. They posed, at ease with themselves and proud of their flamboyant "70's" clothing. Hendrick's later portraits strike such a chord that the sensitive drawing of the pensive, young boy takes us off-guard. 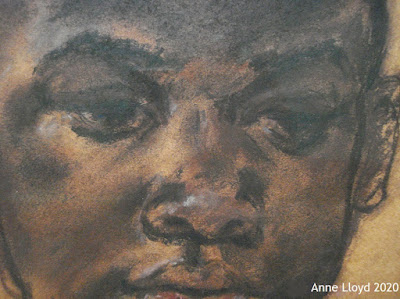 The skillful handling of a limited range of colors, highlighted by deft touches of light blue on the boy's forehead, the mastery of drawing - all these proclaim an "old master" status for the artist. If it comes as a surprise that Barkley Hendricks created this portrait, and not John Singer Sargent, it should not do so.

Hendricks graduated from PAFA - he studied with Sloan - and so did Waring. There is a strong, Philadelphia regional element to the "Awakened in You" collection. Philadelphia-based Dox Thrash, one of the greatest print makers of mid-century America, is well-represented in the exhibition, though in a unconventional way. The selection of his works on view includes a nude, a controversial African American genre given its connotations with slavery. Thrash was on more sure ground with his arresting portrait of a man wearing red suspenders. 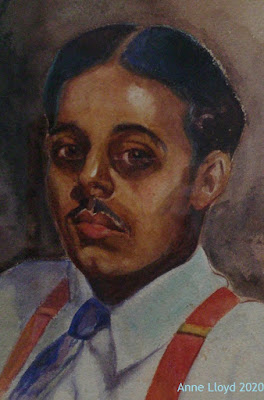 Dr. Clayton, however, looked beyond Philadelphia in her collecting efforts.

There are two drawings in "Awakened in You" by the great Chicago artist, Charles White, on view and a strong showing showing of works by Harlem Renaissance artists. I was particularly impressed by the woodcuts of James Lesesne Wells (1902-1997). The ironically entitled, Primitive Girl, is actually an amazingly sophisticated work, skillfully incorporating American folk art themes with the dignity of the bronze portrait sculptures of Benin. 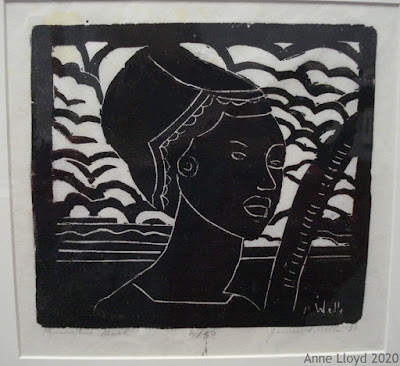 In terms of the artists of the Harlem Renaissance, Augusta Savage was surely the most influential, in terms of her leadership and teaching. Her own work as a sculptor was of the highest quality but Savage often lacked the funds to have her clay originals cast in bronze. 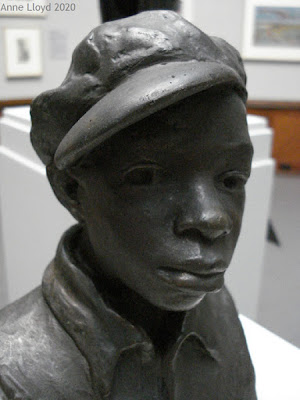 The version of this iconic work, which Clayton was able to purchase for her collection, is one of three sculptures which anchor the "Awakened in You" exhibition. The other sculptures, both bronze casts, are Richmond Barthé's Head of a Dancer, created around 1940, and May Howard Jackson's Slave Boy, 1899.

Another cause for celebration is the high quality of the wall texts which accompany many of the art works on display. Exhibition visitors, myself included, often skim through the comments from unseen, unheralded curators. That is perhaps unavoidable given the need to focus on the art works. But PAFA has gone the extra-mile to commission especially cogent mini-essays to help art lovers grasp the historical setting and aesthetic value of these works of art.

Some of these wall texts were written by the PAFA curators, as we saw with Sarah Spencer's reflections on Four Friends. For the superlative etching  by Henry Ossawa Tanner, extremely perceptive brilliant insights were provided by Mr. Teddy R. Reeves,  Assistant Curator of Religion, Smithsonian National Museum of African American History and Culture. 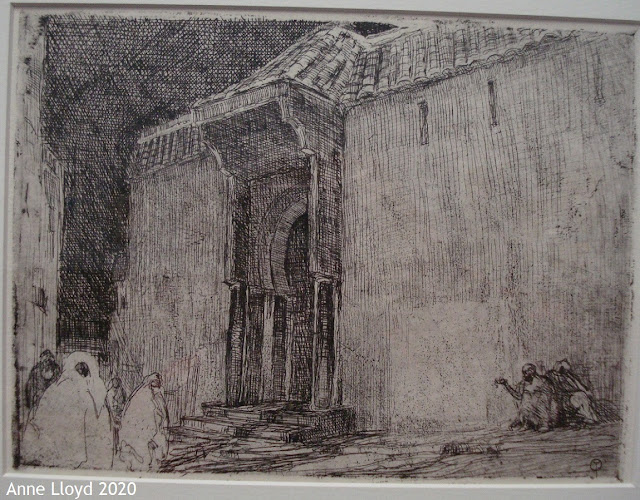 Tanner's subject is a mosque in Tangier, Morocco. Reeves, however, affirms that it is the "Judeo-Christian influence on Tanner" that is on full display. Also implicit in this exceptional work is Tanner's awareness of his status in a racially-divided America. Reeves notes:

Within the biblical text, the positionality of one’s physical body inside or outside of a gate was essential in understanding an individual’s position and stature—from the prophets of the Old Testament calling for justice and transparency at the city gates to Jesus’ interaction with the blind beggar Bartimaeus at the city gate in the Gospel of Mark. Tanner’s capturing of the woman and horse outside of the city’s gates is indicative of the marginality African Americans, including Tanner himself, experienced at the gates of many American cities... Lift up your heads, you gates; be lifted up, you ancient doors, that the King of glory may come in… (Psalm 24:7)

American art has come a long way since Henry Ossawa Tanner felt compelled to express himself in such coded messages. But it is precisely because Tanner "lifted-up" his head and created great and meaningful art that the gates have finally opened wide for African-American artists, writers, philosophers to express themselves fully and freely.

The same can be said of Augusta Savage, Dox Thrash, Charles White, James Lesesne Wells and the other African-American artists whose works Dr. Constance Clayton preserved in the collection which she has so generously shared with the Pennsylvania Academy of the Fine Arts.

Anne Lloyd, Photo (2020) Gallery view of the "Awakened in You" exhibition at PAFA.