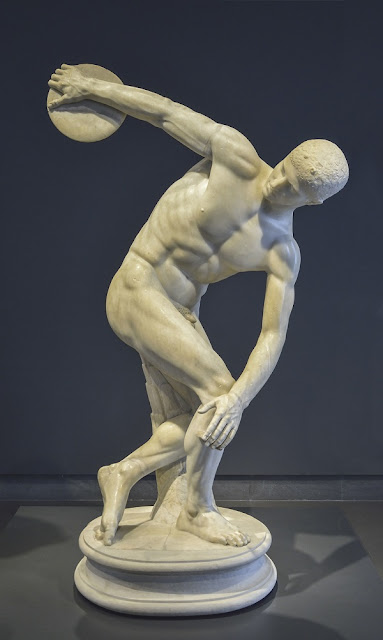 When we use the word classical to describe the art of ancient Greece and Rome, we are taking a big risk.  "Classical" promotes the idea of timeless, carved-in-marble permanence. Even ruined temples like the Parthenon or an "unarmed" statue like the Venus de Milo are envisioned as somehow safeguarded from the long attrition of the centuries. This is obviously not so - nor was it the case even when such classical masterpieces were first displayed in Athens, Corinth and on the seven hills of Rome.

Change and experimentation defined the art of the Greeks and Romans. This is the theme of a new volume in Thames and Hudson's "Art Essentials" series, Susan Woodford's Greek and Roman Art. 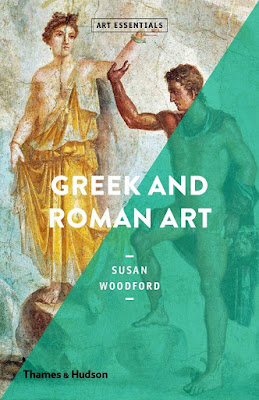 Woodford, a scholar well-versed in the intertwined civilizations of Greece and Rome, expertly analyses a select group of ancient masterpieces. Woodford emphasizes the dynamism of Greek art and of Roman art, too, though not to the degree exercised by the bold artists of Hellas.

Before proceeding with a review of Woodford's Greek and Roman Art, it is worthy to ask why Thames & Hudson published another book for the general public on this subject when it has already produced one of the greatest works in the field aimed at non-specialists. As I mentioned in another Art Eyewitness post, John Boardman's Greek Art in the World of Art series is a true classic. Yes, the word is deserved!

Boardman brilliantly charted the fascinating course of Greek art following the fall of the Bronze Age palace kingdoms like Pylos and Mycenae around 1200 B.C. The primitive, yet vigorous, creative steps during Greece's "Dark Age," followed by Geometric art, the Orientalizing period, the Archaic Age, the "Golden" fifth century B.C. and the Hellenistic era expansion - Boardman expertly handled each in progression. The latest edition of this exceptional book only adds to its laurels.

Woodford takes a bold, alternative approach to Boardman's narrative. By focusing on a few works of exceptional merit and then showing how the progressive development of Greek and Roman art occurred, Woodford presents an original and much-needed introduction for the general reader. I suspect Greek and Roman Art will prove quite insightful for those already familiar with ancient art.

Woodford's first chapter deals with the challenges of carving the human body in marble. When Greek merchants and mercenary soldiers began journeying to Egypt following the Dark Age, they observed impressive statues such as the limestone figure of Tjaysetimu, (British Museum) created at some point between 664-525 B.C.

Lacking the skill of the Egyptian masters, the first Greek sculptors used repetitions of certain shapes in order to depict a coherent bodily form. With excellent charts and crisp, clear commentary, Woodford demonstrates how the early Greeks achieved success with the rigid, yet startlingly alive, figure of the Kouros (Youth). This imposing statue, created around 590-580 B.C. will be readily recognizable to visitors to the Metropolitan Museum of Art in New York City. 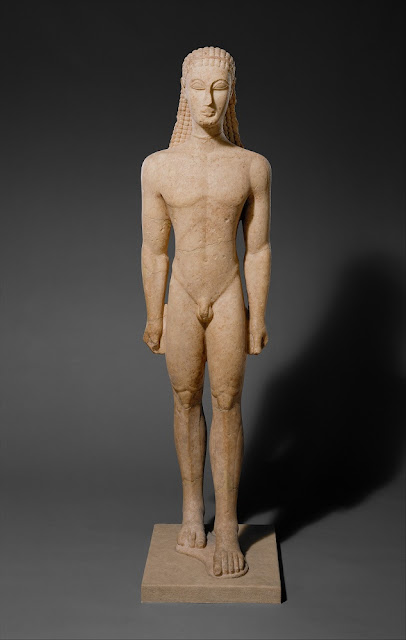 The Greeks, however, were not satisfied with the Met's Kouros and they commenced upon what Woodford calls the "bumpy road to realism."

Woodford studies two slightly later examples of the Kouros model, both in the collection of the National Archaeological Museum in Athens, to demonstrate just how difficult was this journey.

The progressive development of the Kouros statues is displayed on the page format of the book (below). We soon grasp Woodford's point. The much more naturalistic pose of the ca. 530 B.C., Anavyssos Kouros (left-hand page) was compromised by the stylized handling of the braided hair which had not seemed such a problem with the Met Kouros sixty years before. Two decade later, the now almost completely realistic Aristodikos Kouros (extreme right) demonstrates how its skillful sculptor had solved all the problems of the earlier statues except one - its basic pose. Even for a grave marker, the Aristodikos Kouros is truly a "stiff." 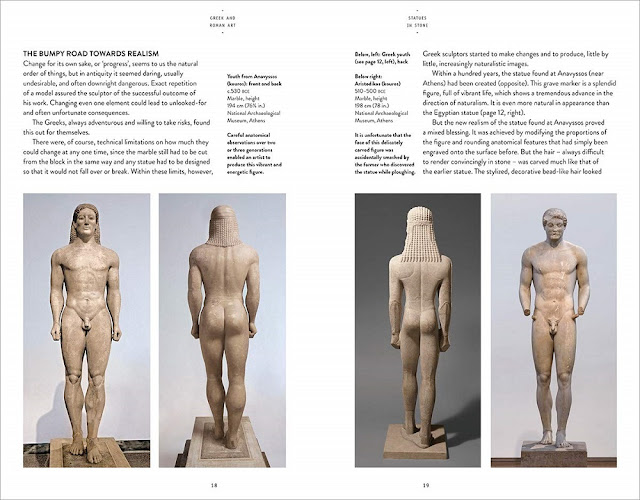 Each step forward, each successful handling of a detail lacking in realism exposed a new problem. An underlying pattern emerged with marble sculpting in sixth century Greece which would challenge artists in all media during the ancient world - change, emergence of a problem, solution of that problem and emergence of another. Woodford notes that "failures" were as important a driving force as was success. She writes movingly about the artists of Greece:

They could have endlessly repeated the same proven formulae, as the Egyptians did, and run no risks, but their restlessness and sense of adventure spurred them on from one problem to another. Each problem led to a solution on a higher level of complexity until finally the Greeks produced solutions that carried such conviction that they left an impress on all later western art and eventually reached the far corners of the world.

The carving of the famous Kritios Boy during the first decades of the fifth century B.C. seemed to have addressed the earlier chain of problem-causing solutions. The "at-ease" pose of the Kritios Boy, balancing his weight on one leg and looking very-much pleased with himself, marked the beginning of the Golden Age of Greek art.

The creation of the Kritios Boy also coincided with rise of democratic government in Athens, where this magnificent statue posed, before the invading Persians knocked him off his pedestal in 480 B.C. Significantly, the Athenians did not try to repair the Kritios Boy. Instead, they commissioned new statues full of motion and dynamism. The lost-wax method of casting bronze statues was a preferred medium for this vigorous democratic art form.

Making bronze statues presented a whole new set of challenges, solutions and new problems which Woodford cogently explores. But the chief problem with a bronze statue, like silver plate and gold jewelry, is that its value in times of economic crisis and war made it a prime target for melting and recasting into coinage.

Back in 2015, the Getty Museum and the National Gallery of Art in Washington D.C. mounted Power and Pathos, a sensational exhibition of surviving bronze statues from both Greece and Rome. These ranged from portrait busts of Hellenistic kings and Roman consuls, their brows furrowed by affairs of state, to the delightful Dancing Faun, a Roman copy of a famous third century B.C. Greek original. 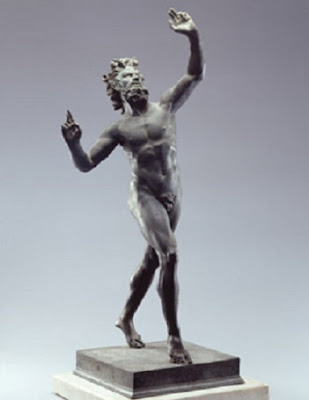 Most of the great bronze statues of antiquity did not share the good fortune of Dancing Faun. We only know Myron's incredible Discobolus or Discus-thrower from Roman marble copies. Several versions of the marble Discobolus survived but, rather comically, there was a dispute over how to position the severed-head of the British Museum's copy. The version displayed in Italy's National Roman Museum, (which introduces this review) shows it correctly.

Ancient bronzes that did survive the smelting furnace were buried or lost at sea. Roman ships, weighed down with the loot from conquered Greek cities often sank en route to Italy. The discovery of iconic bronze statues like the Zeus of Artemisium has transformed our knowledge of ancient art and science.

For the recovery of ancient painting, the "blessings" of adversity also held true. Without the horrific destruction of Pompeii in 79 A.D., we would know little indeed about Greek and Roman painting. Likewise, the resilience of Greek ceramic vessels, whether whole or in shards, preserved the basics of this major form of ancient creative expression. 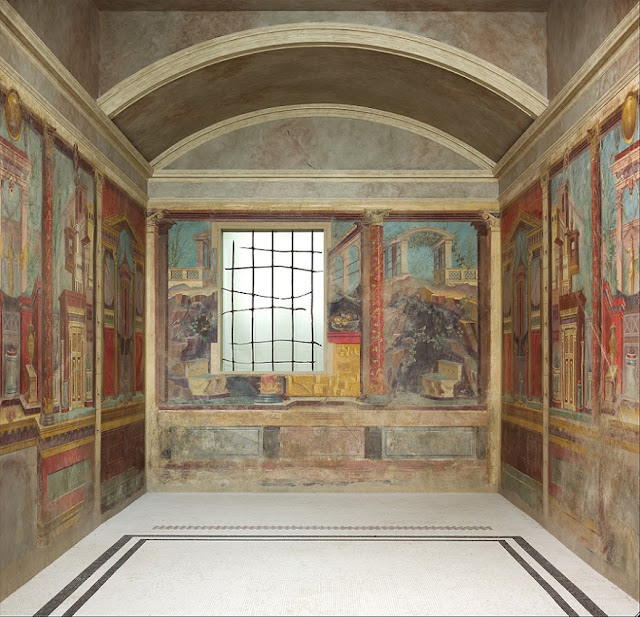 Bedroom from the Villa of P. Fannius Synistor at Boscoreale, ca. 50–40 B.C.

Woodford's pattern of artistic development - change, emergence of a problem, solution of that problem and emergence of another - does not hold true for ancient painting. Too little has survived for us to follow the "march of progress" which Woodford traces so brilliantly in her discussion of the Kouros statues.

Change and experimentation certainly characterized Greek vase painting. But it cannot be asserted that the later red-figure method is de facto superior to black-figure. The artist known as the Berlin Painter was a master of both techniques. His signature work, which gives him his modern name, is a red-figure depiction of a satyr and the god Mercury. It is a great work of art because the Berlin Artist was a great vase painter. The same holds true for Exekias. 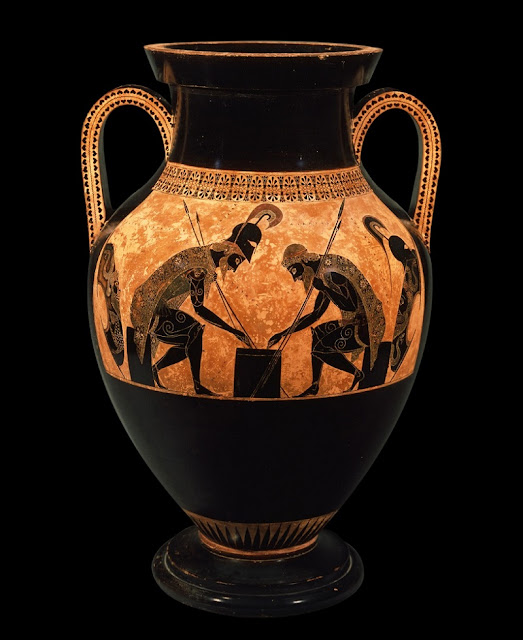 Exekias painted a scene from the Trojan War showing Achilles and Ajax relaxing from the carnage by playing a board game. Created around 540 B.C., this superlative black-figure painting was never surpassed - and rarely matched - by red-figure painting, though the Berlin Painter as his best was certainly Exekias' equal. This stunning work of art combines the primal vigor of Archaic era art with a haunting, psychological probity that pulls the viewer into the scene.

With their shields framing the action, Achilles and Ajax lean forward to concentrate on the game board. Their muscles are relaxed, but their brains are fully engaged. Here we see the Greek mind at work in all of its restless, competitive striving. The intellectual force that would lead to the fifth century Golden Age is at "play" here, not just two warriors.

By contrast, Woodford shows a later amphora decorated with the same scene. Amazingly, the game between Achilles and Ajax appears on both sides of the vase, one done in black-figure, the other in red-figure. Neither come close to Exekias' powerful handling. 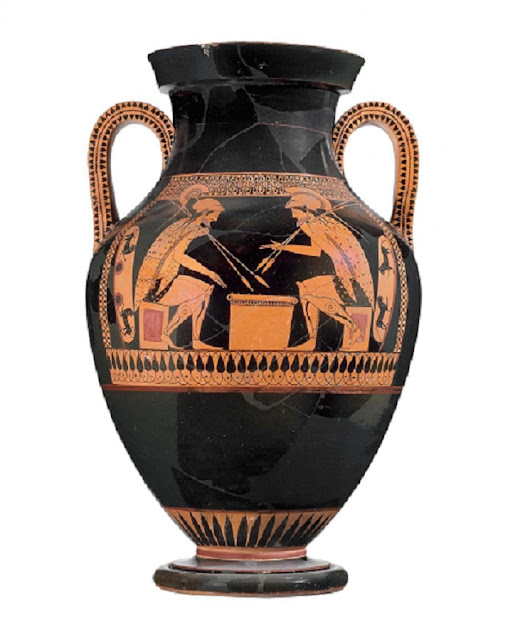 It's a case of "too much." Too much stylization, too many special-effects.  Like a master film maker, Exekias clears the deck and lets the story draw the viewer in. Twenty-five centuries have passed and the game keeps going, engaging us with the same intensity as it does for Achilles and Ajax.

Woodford concludes Greek and Roman Art with a brief, but perceptive, survey of art among the non-Greek inhabitants of Egypt and Rome's other provinces. In the case of Egypt, the "fortunate survival" scenario reoccurs, as with Pompeii. In Egypt, the dry, arid conditions preserved paintings, fabric art, documents and much else which otherwise perished in Greece and Italy. 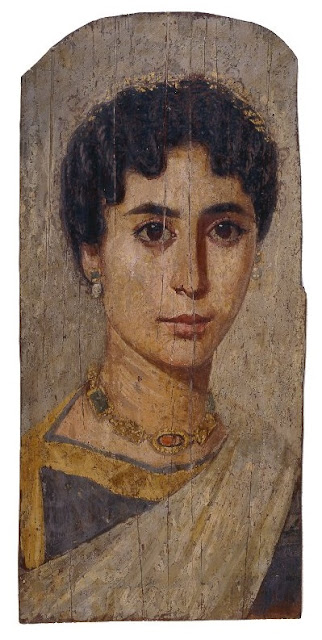 Of these "survivors," the mummy portraits from Egypt, created at the height of Rome's rule, are the most important. Painted with the encaustic wax technique, the best of these memorial portraits show Greek technique, Roman pragmatic realism and Egyptian concern for the afterlife seamlessly combined in tour-de-force masterpieces.

The same accolades apply to Woodford and her wonderful book. I wish she could have found room to discuss the role of coins in the diffusion of art throughout the Greco-Roman world. This topic would certainly make for another, much-needed volume in the Thames and Hudson's Art Essentials and Woodford would be the perfect guide.

For the time being, I am confronted with the happy "hardship" of finding room for Woodford's Greek and Roman Art among the "essentials" on my bedside bookshelf. It's going to be a tight squeeze, but I will definitely be placing this superb volume in the company of my battered copy of Kenneth Clark's Civilization and other "classics."

Posted by Art Eyewitness at 7:50 PM