In most books on Western art, the mosaics of Ravenna, the last capital of the Western Roman Empire, are accorded a few paragraphs of commentary. Then, the narrative bids farewell to the glories of ancient art and the journey to the Middle Ages begins.

A recently published book about Ravenna presses the pause button of the march of art history. The author, Judith Herrin, demonstrates that the impact of Ravenna was much broader and more influential, in politics and in art, than is generally realized.

In this major reassessment, Herrin combines an overarching view of events and historical trends. She also focuses on the social, religious and artistic history of Ravenna. There are so many points of cultural transition, shared with the embryonic nations of the West, that Ravenna certainly merits the title of "crucible of Europe."

Ravenna's "center stage" role in history began as Germanic tribes crossed the frontiers of the Roman Empire, beginning with the Goths in 376.

In 402, the Emperor Honorius evacuated his court from Milan (Rome itself was no longer the capital of the Western half of the Empire) and took refuge in the more defensible city of Ravenna. Until that point, Ravenna had been a navy base where a branch of the Po River flows into the Adriatic Sea. Ravenna and its neighboring port facility, Classis, were surrounded by dense marshes which the cavalry of the Gothic tribes could not easily cross.

Of necessity, Herrin presents a considerable amount of political history which took place beyond Ravenna's protective marshes. Inside the city limits, many of the norms of urban life under the Roman Empire continued - chariot races, public baths, regular supplies of grain from Sicily or North Africa. When Rome was sacked in 410 by Gothic troops who had not been paid, the shock was "seismic" but life went on. Those who could, fled to Ravenna.

Two of the political "survivors" who flourished in Ravenna serve as major protagonists in Herrin's often gripping narrative. These larger-than-life figures are Empress Galla Placidia (ca.388-450) and the savy Gothic leader, King Theodoric (454–526). Their lives, fraught with peril and adventure, cannot be more than summarized here. They did share one significant life experience. Galla Placidia and Theodoric both spent a considerable part of their youth as hostages. 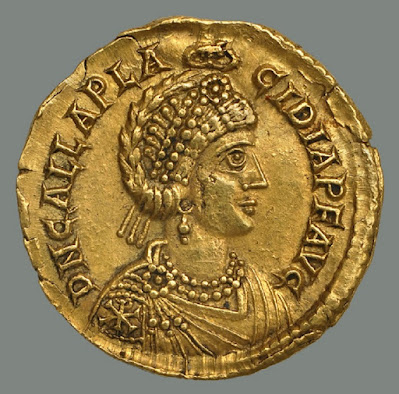 Galla Placidia was half-sister to the feckless Emperor Honorious. She was living in Rome rather than Ravenna, when the Gothic mercenaries stormed the city in 410. Galla Placidia was carted-off with other prisoners when these Visigoths departed. She was very well-treated and eventually married the Gothic king, Athaulf. This union might have led to a Roman-Goth alliance but Athaulf was murdered by one of his own men. Galla Placidia was eventually released, married again and for a decade was the regent of the Western Empire for her young son, Valentinian III.

Theodoric, born in 454, spent his younger years as a hostage in Constantinople, capital of the Eastern roman Empire. He spent his time wisely, learning about the ways of the Romans. 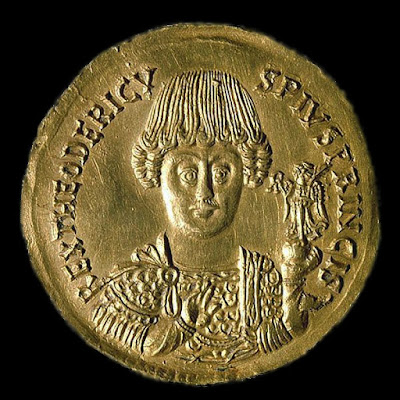 By a series of complex maneuvers, diplomatic and military, Theodoric seized power in Italy, with his capital in Ravenna. He ruled, nominally on behalf of the Eastern Empire. The real power was his and Theodoric understood that raw military strength was most effective when tempered by patronage of the Christian Church and its art.

In cultivating the Church, Theodoric followed in the footsteps of Galla Placidia.

When Galla Placida took up residence in Ravenna, following her release by the Visigoths, she had few political "cards" to play. But constructing  impressive churches was one way of asserting power. This she did, building the great church in Ravenna dedicated to St. John the Evangelist and, even more famously, the edifice known as the Mausoleum of Galla Placidia. As Herrin astutely notes, Galla Placida's Mausoleum was never intended as a burial chamber but was part of another church which no longer survives. 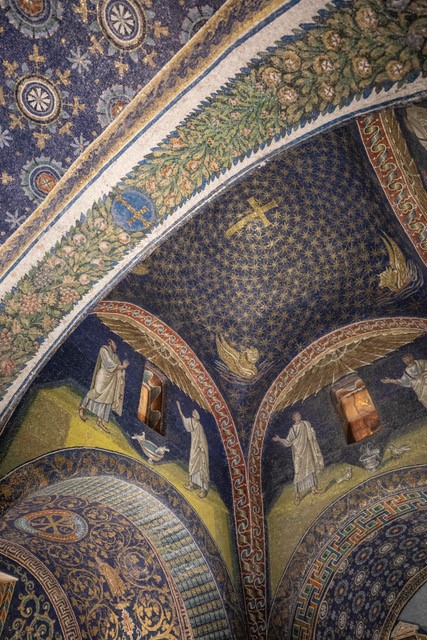 The Dome of the Mausoleum of Galla Placidia, 425-450
Photo: © Kieran Dodds

Galla Placidia's "Mausoleum" is an manifestation of political and religious, indeed universal, order. The astonishing mosaics of its interior show a starry sky, an image of Jesus - one of the earliest surviving depictions of Christ, a scene showing the martyrdom of St. Lawrence and decorative motifs of flora and fauna recalling the Garden of Eden. These mosaics are accompanied by verses, based on quotes from the Bible, carved on the arches of the building.

Galla Placidia brought heaven to earth with this incredible imagery. She also reasserted the claim of the rulers of Rome to a definitive religious role. Beginning with Constantine, the first Christian emperor, Rome's supreme leader was declared to be isapóstolos - "equal of the Apostles." Galla Placidia's magnificent buildings in Ravenna proclaimed that an empress could be isapóstolos, too.

There is no record of King Theodoric desiring to be recognized as "equal to the Apostles." He did aim at political parity with the Eastern Roman emperor and very nearly achieved this goal. 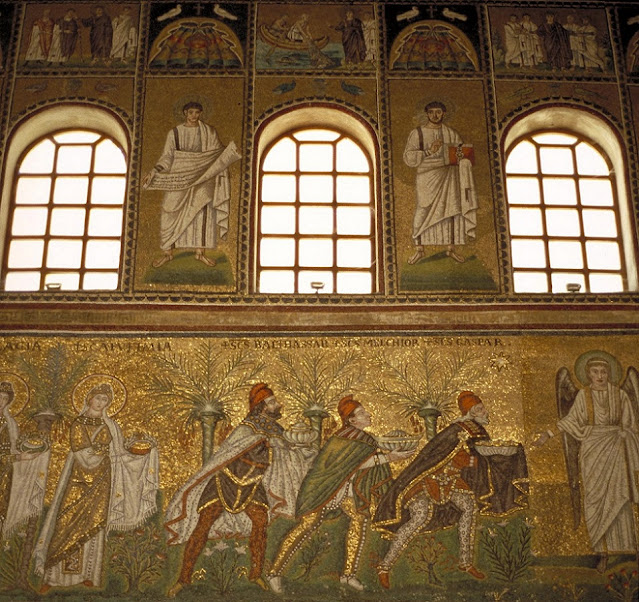 Detail of mosaics on the north wall of the nave of St. Apollinare Nuovo, showing the presentation of gifts by the Three Magi.
(This image does not appear in the book.)

A capable general and skillful diplomat, Theodoric rivaled Galla Placdia as a builder of churches in Ravenna. His palace church, St. Apollinare Nuovo, with towering marble pillars and three tiers of mosaics, ranks as one of the great architectural achievements of the period, equal in merit to contemporary structures in Constantinople sponsored by the Eastern emperors.

Theodoric faced a problem which Galla Placidia never had to deal with. Although Theodoric was a Christian, he was a member of a group branded as heretics by the Christian religious establishment. He wasn't alone. Almost all of the German tribes had embraced Arianism, a form of Christianity which emphasized the cosmic power of God the Father, with the divinity of Jesus - the Son of God - being of a much lesser degree. The established Christian view, Orthodoxy, held that Jesus was equally human and equally divine.

The difference in theology was profound and affected the composition of the art works on the walls of Ravenna's churches. Herrin's perceptive analysis, ably complemented by the superb photos of Kieran Dodds, helps the reader grasp the contending views of Jesus, God and Man.

Ravenna's baptisteries are a case in point. These buildings, still standing, were constructed for new Christians to profess their faith. Recalling the baptism of Jesus in the River Jordan, one shows a mosaic of Jesus as a mature adult, the other as a beardless youth. The first is the Orthodox Baptistery, the second - built by Theodoric - is the Arian Baptistery.

These rival interpretations of how Jesus' physical attributes reflected his divine status is a fascinating subject. Early Christian art emphasized the image of Jesus the Good Shepherd, rather than Jesus on the Cross. The crucified Christ was still a source of grief and mortification despite the passing of centuries. 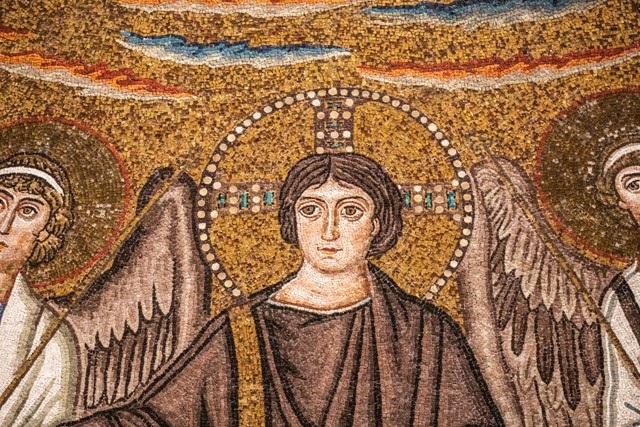 Detail of the young Christ from the apse of San Vitale, 526-540
Photo: © Kieran Dodds

When we look at the magnificent depiction of a young, fresh-faced Jesus on a spectacular mosaic in the Church of San Vitale in Ravenna, we are seeing the deep roots of the emphasis on his humanity. Yet, San Vitale is an Orthodox Church, built after Theodoric. Not far from this image in San Vitale, is another depiction of Jesus, older and more venerable - and bearded. Even the Christian Church establishment felt the need to try and satisfy both parties.

So too did Theodoric. He was a notably tolerant ruler, accommodating both the Orthodox population of Italy and his own Arian followers. .

Theodoric's amazing political fortune never turned as long as he lived. But all his hopes for a Gothic dynasty of a united Italy, ruled from Ravenna, swiftly withered after he died in 526. The powerful and ambitious Emperor Justinian made his move to reconquer Italy, ultimately achieved after a bitterly fought campaign. Italy was left in ruins and the Byzantine treasury drained of funds needed to pay Justinian's troops.

No sooner were the Goths defeated than a new wave of German invaders, the Lombards, overran the north of Italy. Ravenna was menaced by an unceasing round of raids and sieges, though its marshland defenses generally held.

Within the city walls, a similar scenario occurred. Arianism was refuted, to be succeeded by endless, hair-splitting interpretations of Jesus' human/divine nature.

The latter chapters of Ravenna, Capital of Empire, Crucible of Europe make for some fairly discouraging reading. But Herrin redeems the political and religious folly of that era by her insightful examination of Ravenna's social history. While "things fell apart" and "the center did not hold," considerable achievements in medicine, scientific education and linguistics occurred in the beleaguered city.

Ravenna endured. Charlemagne eventually crushed the Lombards and was crowned as Holy Roman Emperor on Christmas Day, 800. As he laid the foundations of his expansive realm, he had only to look to Ravenna as a treasure house of art and architecture and a ready source of political ideology and scientific ideas. 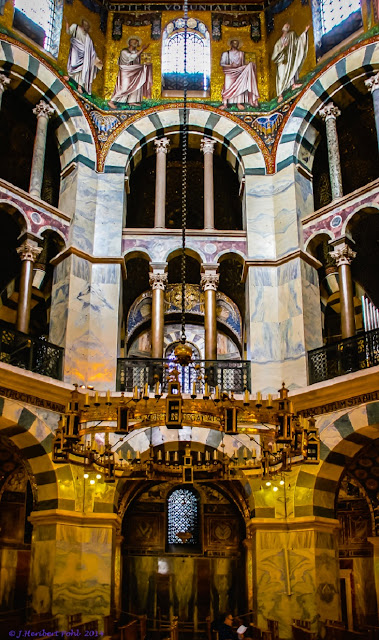 The Domkirche (Palace Chapel) of Charlemagne at Aachen, 794-813

Charlemagne visited Ravenna three times. He directly modeled the Domkirche,  or palace chapel, which he built in his capital city of Aachen on the plan of the Church of San Vitale in Ravenna.

Visiting the king's mausoleum ... Charles perhaps considered how to be buried in a comparably impressive fashion. Theodoric's combination of Germanic aggression and Byzantine statecraft created a startlingly relevant model for the Frankish king so recently raised to imperial status.

Ravenna's legacy came at a high price - for Ravenna. In one of the most provocative conclusions of her very fine book, Herrin judges that the efforts to safeguard the knowledge of the ancient world ultimately sapped the strength and independence of Ravenna's people.

So much effort was expended in protecting the city from invaders beyond the marshes that little energy and resources remained to drain the harbor at Classis. Year-after-year, erosion filled the port with silt, cutting Ravenna's access to the sea. Likewise, the emphasis on preserving traditional knowledge prevented the growth of a sense of trial-by-error initiative - and innovation.

By the time of Charlemagne's visits, Ravenna was fading in economic power. Venice, founded in 697 by refugees from Lombard raids, was already sending merchant vessels and protecting warships down the Adriatic Sea, en route to the Mediterranean sea lanes. The ships of Venice, proudly flying the lion banner of St. Mark, sailed past land-locked Ravenna, without bothering to stop.

The Dome of the Mausoleum of Galla Placidia, 425-450. Courtesy of Princeton University Press. Photo: © Kieran Dodds

Detail of mosaics on the north wall of the nave of St. Apollinare Nuovo, showing the presentation of gifts by the Three Magi. Courtesy of the University of Michigans' Art Images for College Teaching.