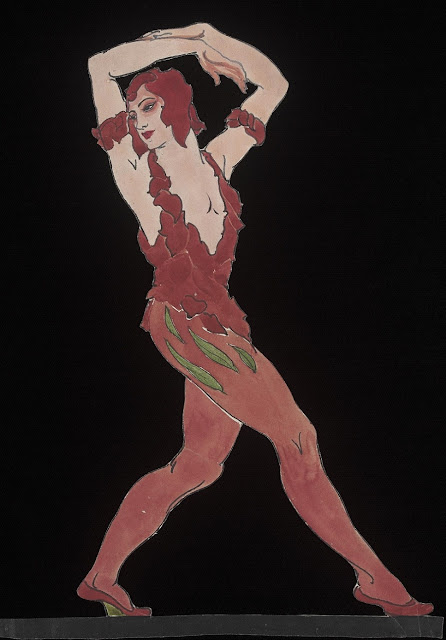 The V&A Book of Color in Design

Mark Twain was correct. "Man is the only animal that blushes. Or needs to."

What Twain did not mention is that our blushes only register with other human beings. The ruddy red color which spreads across our faces in moments of embarrassment or mortification cannot be detected by dogs, cats, rabbits and most other animals. The range of color which can be perceived by our four-legged friends is far more limited. Dogs and cats can see some shades of blue and green, but not red.

Even the bulls of Spain, charging towards the matador's cape, are oblivious to its red hue. These fearsome beasts are goaded into action by the motion of the muleta, not by its vivid color. 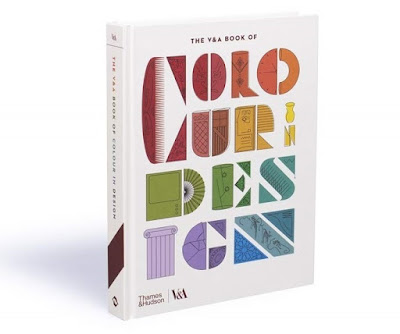 Color is a very human matter, fascinating, compelling and confusing. A brilliant new study, The V&A Book of Color in Design, goes a long way to help us grasp the way that people understand and make use of color.

The science behind humanity's appreciation of color has engaged some of the greatest minds in history. The conflicting theories of Sir Isaac Newton and Johann Wolfgang von Goethe set the tone of the Age of Enlightenment dialogue on color. 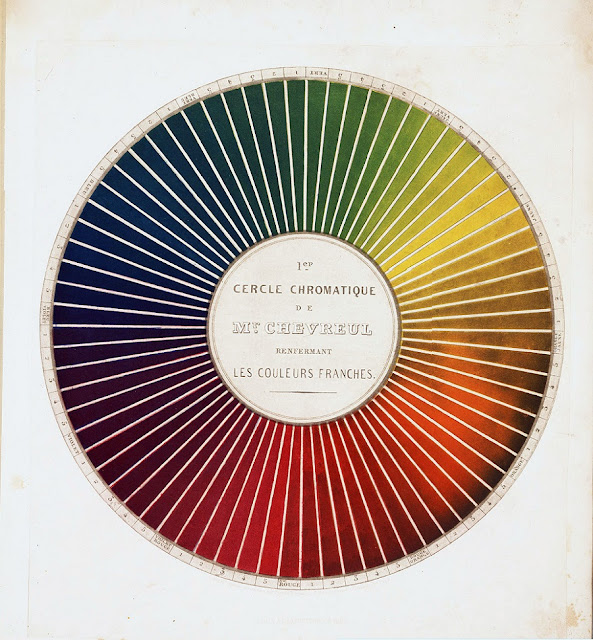 Engraving by René-Henri Digeon of Michel Chevreul's
Cercle Chromatique (1864)
The modern version of the color wheel, showing how colors relate to each other, is based on the research of Michel Chevreaul during the nineteenth century. Without Chevreul's Cercle Chromatique (1864), the innovations of the Post-Impressionist painters might never have occurred.

The V&A Book of Color in Design is a collaborative endeavor of the Victoria and Albert Museum, Here Design Studio of London and Thames & Hudson Publishers.

Edited by Tim Travis, a curator of the V&A's Word & Image Department, the book can be used as a reference source for artists and designers. Organized in chapters devoted to specific colors, 375 works of art and craft from the V&A collection show how color has been used - and sometimes abused - from antiquity to the present day. 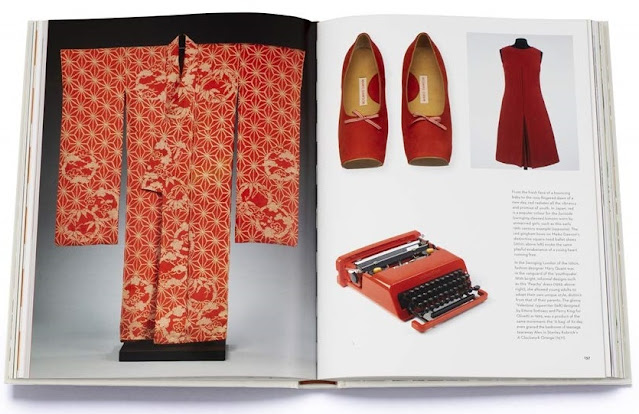 Page spread from The V&A Book of Color in Design

Yet, the importance of The V&A Book of Color in Design transcends its role as a historical survey. This is an insight-rich book which will engage thoughtful readers in focusing their eyes on the world around them.

Human beings have been putting color to use for a long time. The introductory chapter discusses the discovery by archaeologist Lawrence Barham of a layer of sediment used by prehistoric humans to create colors, most likely for cave painting and body decoration. Minerals, many excavated at other sites, were painstakingly ground-down with stone tools to extract a wide range of pigments: brown, red, yellow, purple, blue and pink.

The site of this color "processing" center was the Twin Rivers Cave in Zambia. The complex activity dates to between 200,000 to 400,000 years ago.

Even if we accept the most recent of these long-ago dates, the implications are astonishing. Colors were already being "man-made" before the first definitive evidence of Homo sapiens, in the shape of skull fragments found in Ethiopia, dating to 195,000 years ago. Scientists conjecture that human language was not prevalent until 150,000 years ago. Thus, color served as a form of self-expression even before our ancestors could verbally articulate their thoughts and feelings.

The fact that many of the minerals had to be transported a considerable distance to be processed into pigments at the Twin Rivers Cave deserves further consideration. Here we see the sequence of the material/spiritual culture of color. Extracted from the earth, processed by human hands, colors were then projected into "higher" value systems.

The transformation of raw minerals into gleaming treasures fit for the gods - or godlike humans - is best observed in the chapter dealing with the color Blue. "The difficulty and expense of extracting or creating blue materials," the caption text notes, "elevated the color's status among those keen to demonstrated their wealth and taste."

Rare, costly lapis lazuli, unearthed in mines in remote Afghanistan since the dawn of civilization, was used to create works of art of special significance for the religious and royal authorities of many ancient realms. Merchant "princes" later asserted their claim to elite status with prized possessions embellished with lapis lazuli. A particularly notable example is this chess/backgammon set from sixteenth century Venice which incorporated three shades of the rare blue mineral on the rosewood and gold games board. 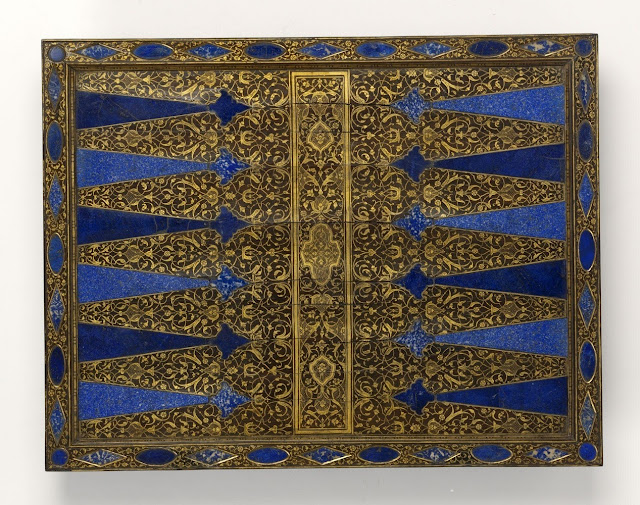 The great lengths required in antiquity to procure lapis lazuli explains the efforts of the ancient Egyptians to find a substitute. Turquoise, a semi-precious gemstone, was available closer to home, but not without effort, for the mines were located in the inhospitable Sinai peninsula. In what is almost certainly the first "R&D" initiative in history, the Egyptians developed faience, a glaze for ceramics composed of ground quartz, plant ash, lime water and copper oxide. This was applied to all manner of objects, secular and sacred, giving them a touch of the color of the heavens above.

The example of Egyptian faience in the The V&A Book of Color in Design is a monumental representation of the scepter of Pharaoh Amenhotep II, ca. 1401 BC.

For once, the superlative photos in the book do not give a real "feel" for the size of this incredible example of ancient Egyptian regalia. To gain that insight, it is necessary to see how it is displayed in the V&A gallery. 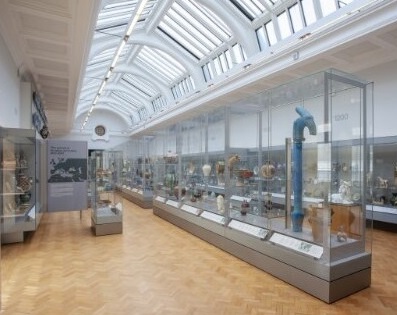 Even after the discovery of chemical dyes in the 1850's, the symbolical value of colors remained a central tenant of artists and philosophers. Vasily Kandinsky, Franz Marc and the other Blue Rider artists expounded the "spiritual" nature of color and art, until the drab, uniform brutality of World War I overwhelmed their bold experiments.

Utilizing color has often presented problems. The color Green in oil paintings can quickly fade, an obvious challenge for landscapes painters, like J.M.W. Turner who disliked using it.

The French glass artist, Emile Charles Gallé, however, mastered this tricky color. He created his Oak Leaf Vase in direct communion with nature. Gallé's personal motto was "my roots are in the depth of the woods." Gazing at this green-hued masterwork for a short time, we find ourselves there as well. 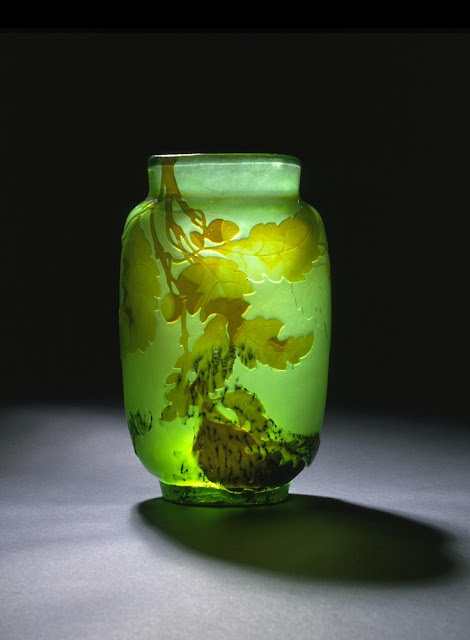 Emile Charles Gallé, Oak Leaf Vase, ca. 1895
Red is another color with a problematical past and present. As ceramic artists know, Red is a volatile color. A red-glazed piece of pottery requires close attention to the temperature settings of the kiln and to the reduction of the inflow of oxygen in order to achieve the correct color. Even a slight error can ruin the red coloring of a piece.
Red dyes in clothing were also a challenge. The famous redcoats of the British Army often faded to a russet shade of red after a few weeks in the field. Officers normally had uniforms made by private tailors who used cloth colored with more expensive dyes. Thus, the officers' uniforms retained their vibrant hue longer, making them more conspicuous targets. 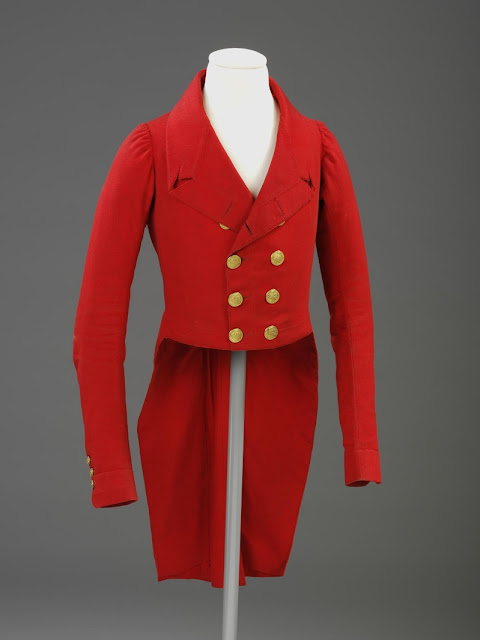 British Hunting Coat, 1810-1820
In the case of the fox hunter (above) from the era of Jane Austin, there were no such dangers. Gentlemen's coats were called "hunting pinks" and the foxes were unarmed!
Colors have taken on a vast range of meanings and connotations. The V&A Book of Color in Design is rich in stimulating commentary on the bewildering differences of opinion and belief regarding the various colors. Red, the color of valor - and blood - is also associated with the seductive, sassy lip gloss of "scarlet" women. 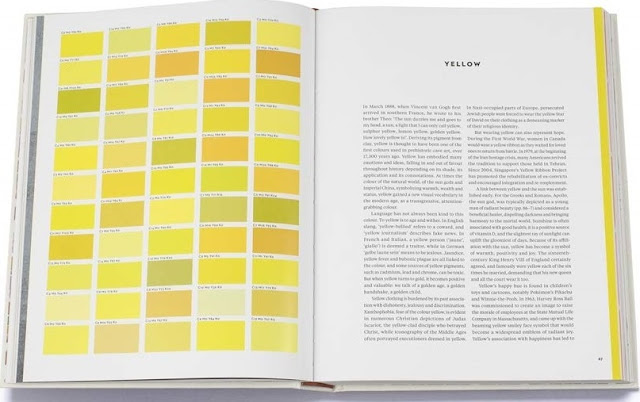 Page spread from The V&A Book of Color in Design
Happy, cheerful Yellow, available in an abundance of hues, has been singularly unlucky in the negative roles and values ascribed to it.
Language has not always been kind to this colour. To yellow is to age and wither. In English slang, "yellow-bellied" refers to a coward, and "yellow journalism" describes fake news. In French and Italian a yellow person ("jaune","giallo") is deemed a traitor, while in German "gelb laune sein" means to be jealous. Jaundice, yellow fever and bubonic plague are all linked to the colour, and some sources of yellow pigments, such as cadmium, lead and chrome, can be toxic.
All of this negativity relating to Yellow can be banished by looking for a few moments at a print of Vincent van Gogh's Sunflowers and reflecting on his remark to his brother Theo, "How lovely yellow is!"
In the conflicting court of opinion regarding color, even Black and White are not "black and white" matters. In the Western world, Black is generally the color of mourning, while in East Asia White is worn on such somber occasions.
During the 1500's and 1600's, Spanish nobles wore black garments almost as a national uniform. However, the great expense of black dyes made such seemingly austere clothing a source of arrogant pride.
More than a hint of Black's clandestine qualities appears in the portrait miniature, below, painted by Isaac Oliver, ca. 1605. This is a sexually provocative, emotionally charged keepsake to be worn on a chain over a lover's heart! 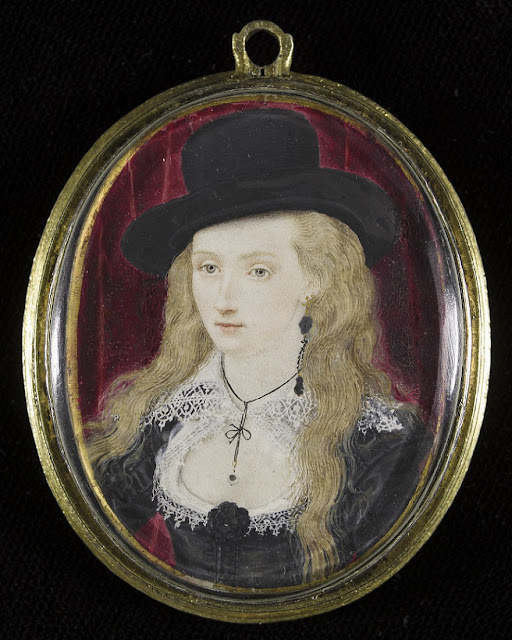 Isaac Oliver Portrait Miniature of an Unknown Woman, ca. 1605
Who is this Dark Lady with the jaunty hat and the daring decolletage? We don't know. Might this in fact be a portrait of one of the boy actors who portrayed women on the Elizabethan stage? Could she/he be the model for Virginia Woolf's Orlando? It's really up to us to decide!
And that's just the point about color. The multitude of interpretations made available to us by the variegated nature of color is a call for setting free our own imaginations. And that in turn, requires us to open our eyes and minds to the evolving, ever-expanding universe we inhabit.
If The V&A Book of Color in Design has a "moral", it is this: color cannot be defined. It is what we make of it.
By way of confirmation of the awesome possibilities opened to us by color, I experienced a remarkable epiphany while working on this review. I looked up from reading The V&A Book of Color in Design to see a beam of light streaming through a prism which we have hanging in our bedroom window. There on a pillow case, before my eyes, was the color spectrum in all its glory. 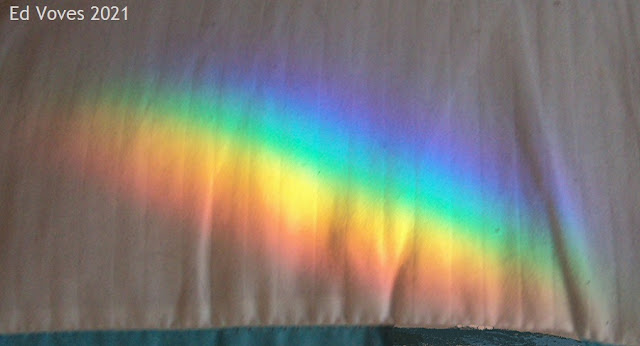 Newton's classic experiment on the division of "white" light into all the colors of the rainbow was taking place, guided by an "invisible hand." Totally unaware of what was taking place, I would never have witnessed this incredible moment of synchronicity, had I not looked up. And by some act of good fortune - or grace - I had a small digital camera close at hand to record this amazing event.
Here, displayed on the pillow case was color in all of its simple, startling beauty. Glancing down on the pages of the V&A book, I saw examples of creative endeavor, decked out in color effects of every hue and shade.
Color is a manifestation of life itself. It is an invitation to you and me to join in, to live in a world of imagination, provided our minds and hearts are open to the experience.
***
Text: Copyright of Ed Voves. Original Photo: Ed Voves. All rights reserved
Book cover and page spreads, courtesy of Thames and Hudson, Publishers. Collection images, courtesy of the Victoria & Albert Museum, London.
Introductory Image:
Vera Willoughby (British, 1870-1939) Wooden figure showing Vaslav Nijinsky in Mikhail Fokine's ballet "Le Spectre de la rose". Pen and ink drawing, with gouache: Height: 236 mm. Lower edge of base width: 172mm. Victroria & Albert Museum. Cyril W. Beaumont Bequest. # S.703-2001

Unknown Artist/Maker. British Hunting Coat, 1810-1820. Woollen superfine cloth and metal buttons: part-lined with woven sateen and cotton, hand-sewn.  Victoria and Albert Museum.  Purchased with Art Fund support and assistance from the Friends of the V&A, and a number of private donors. # T.100-2003

Posted by Art Eyewitness at 7:05 AM