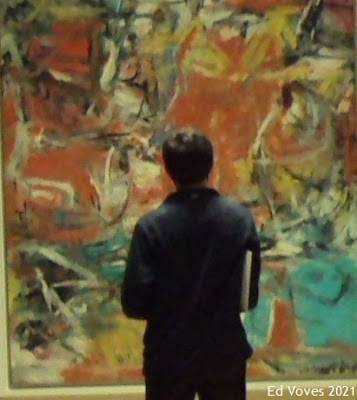 Soutine / de Kooning: Conversations in Paint
The Barnes Foundation, Philadelphia
March 7- August 8, 2021
Reviewed by Ed Voves
February 1943 was hardly a promising time to mount an art exhibition. World War II had been raging since September 1939 and there was no end in sight. George Keller, the owner of the Bignou Gallery in New York City, persevered, opening A Selection of Paintings of the Twentieth Century on February 8th, 1943.

The Bignou exhibit was to prove to be a landmark event, though few could have realized it at the time. Two of the twentieth century's most controversial and talented painters were exhibited together for the first time: Chaïm Soutine and Willem de Kooning. It was the start of an artistic exchange which would influence the development of visual expression in the postwar world, especially in the United States.

March 2021 is not exactly a propitious moment for opening an international exhibition, either. Despite the continuing Covid-19 pandemic, the Barnes Foundation in Philadelphia and the Musées d’Orsay et de l’Orangerie in Paris are collaborating on an ambitious exhibit, Soutine / de Kooning: Conversations in Paint. This joint-effort opens first at the Barnes before moving on to the Musée de l’Orangerie in the autumn of 2021.

With 45 paintings on view, plus several historic documents from the archives of the Barnes Foundation, Soutine / de Kooning is a "focused" exhibition. Under normal circumstances, Claire Bernardi, Curator at the Musée d’Orsay, and Simonetta Fraquelli, Curator for the Barnes Foundation, would each be accorded well-deserved accolades and the exhibit would receive an honorable mention in the art press.

Given current difficulties of travel and transport due to Covid-19, Soutine / de Kooning deserves much more than a polite round of applause. A major collaborative undertaking, the exhibition involved levels of detailed planning and organization far in excess of pre-Covid days. 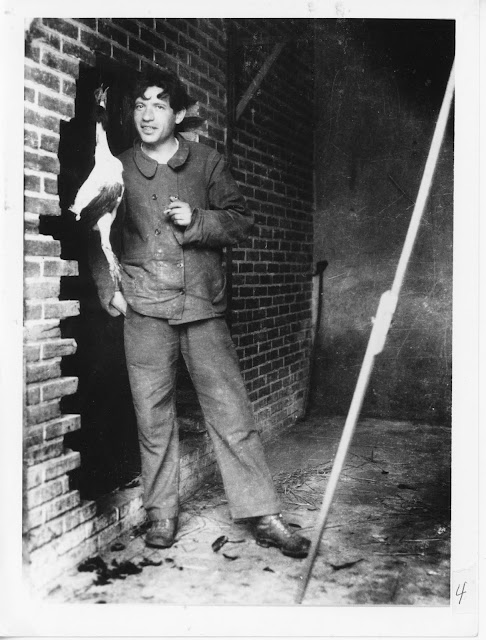 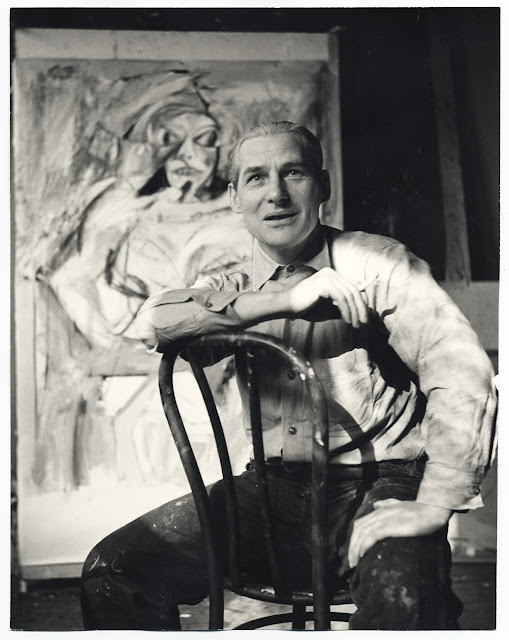 Why such extraordinary efforts were devoted to an exhibition about Soutine and de Kooning, however, needs to be considered. The two artists never met and there are major differences in their approach to art. De Kooning was certainly an admirer of Soutine, declaring in 1977, "I’ve always been crazy about Soutine - all of his paintings." Beyond that rather tenuous bond of approval, there would seem to be little upon which to base a joint appraisal of their careers.

In 1922, the founder of the Barnes Foundation visited Paris to purchase works of art for his growing collection. According to Barnes' recollections, he spotted a painting by Soutine in a Paris bistro. His agent, Paul Guillaume, directed him to Soutine's dealer, Leopold Zborowski. Barnes purchased fifty-two of Soutine's works from Zborowski and from Guillaume for a combined expenditure of 37,600 francs.

The career of Chaïm Soutine was at a low ebb when Dr. Barnes put him at the top of his shopping list. Soutine was still reeling from the death of his great friend and mentor, Amadeo Modilgliani, in 1920. Born in 1893 in Belarus, Soutine had come to Paris just before the outbreak of World War I. Enduring extreme poverty, Soutine haunted the galleries of the Louvre, absorbing the lessons of the Old Masters, especially Rembrandt. 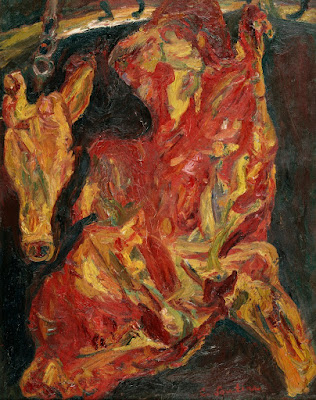 Soutine devoted himself to perfecting his signature style, fluid brush strokes and bold coloration, which he applied to intriguing portraits of working-class Parisians and to landscapes which seem perpetually shattered by earthquakes. 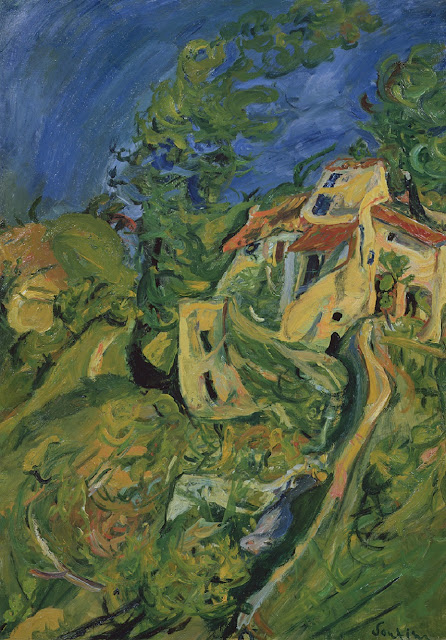 Dr. Barnes' huge purchase established Soutine as a major figure in Modernism, though he remained an "outsider" on several counts. Soutine held himself aloof from Surrealism and, though devoted to the classical traditions of European art, he was not a protagonist in the "return to order" movement which followed World War I. As an Eastern European Jew, Soutine was vulnerable to the escalating danger of anti-Semitism. 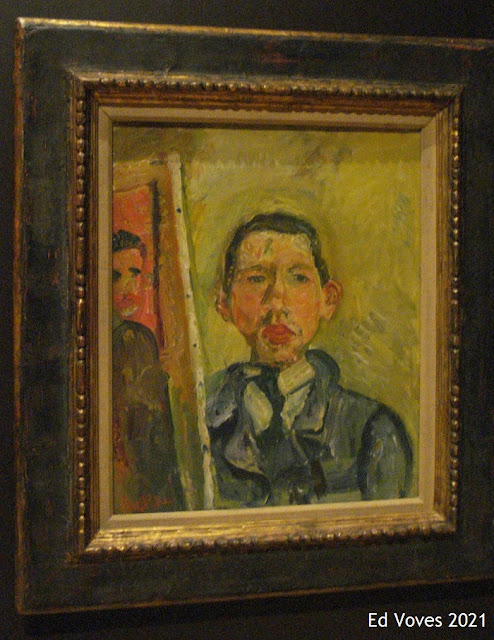 Yet, Soutine's reputation was well-established by the late 1920's and Barnes added to his standing by comparing him to Cezanne and Van Gogh in his 1925 book, The Art in Painting. Barnes also resold some of his paintings by Soutine, but this actually worked to Soutine's benefit as his oeuvre now became available to a wider audience. One of those interested onlookers was Willem de Kooning (1904-1997).

The superb exhibition catalog contends that de Kooning likely viewed works by Soutine for the first time in 1930 at the just-opened Museum of Modern Art. He is definitely known to have examined works by Braque and Picasso at the MOMA exhibit, Painting in Paris, from American Collections, which displayed three works by Soutine.

De Kooning had come to the U.S. from the Netherlands as a stowaway on a cargo ship in 1926. He worked odd-jobs, just as Soutine had done in Paris. Whenever he could, de Kooning visited museums and galleries in New York City. Of special significance were his museum jaunts with Arshile Gorky, who befriended him as Modigliani had embraced Soutine.

Soutine's paintings were shown in the U.S. with increasing regularity during the 1930's. De Kooning, thus, had plenty of opportunity to study Soutine's oeuvre. Dr. Barnes' patronage of Soutine continued to be an important factor. Barnes helped to organize a solo show of Soutine at the Bignou Gallery which immediately followed the joint display of Soutine's and de Kooning's works in 1943, mentioned above.

During these years, de Kooning constantly sought to "find" himself as an artist. Unlike Soutine, he never created a signature style. More importantly, like Soutine, he refused to be defined by the prevailing trends and "isms" of the art scene.

“Art," de Kooning famously declared, "should not have to be a certain way.”

Soutine / de Kooning: Conversations in Paint brilliantly explores the effect of Soutine's art upon de Kooning. The exhibition surveys de Kooning's work in a general chronological timeline while Soutine's paintings are shown thematically, as they made an impact on de Kooning.

The "influence," be it noted, was not one directional. Soutine died in 1943, desperately ill and in grave danger of arrest by the Gestapo. It is almost certain that he never heard of de Kooning. Yet, Soutine's stature as an artist is heightened by the degree of appreciation which de Kooning accorded to his work.

Unlike de Kooning, I was never "crazy about Soutine." To me, his portraits seemed to retreat to the shadows of a gallery when those by Modigliani were also on view. But when I spent time with the assembly of "everyday" people painted by Soutine in the present exhibit at the Barnes, I was greatly moved. 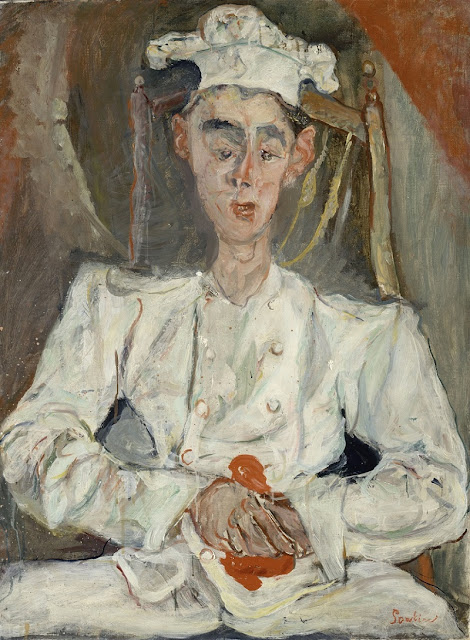 The fact that there were no portraits by Modigliani on view did not make a difference. Rather, it was the removal of any kind of distracting context or commentary which was important. In each of these portraits, Soutine painted a person, not a type. To Parisian society, these were insignificant, "little" people. To Soutine, who had worked for a time as a "bell hop", they were people who mattered.

The key inspirational point of Soutine's portraits derives from his resolute emphasis on individuation. But these portraits are also complex, psychologically-layered works, not easily approached by another artist seeking to interpret them according to his own vision. 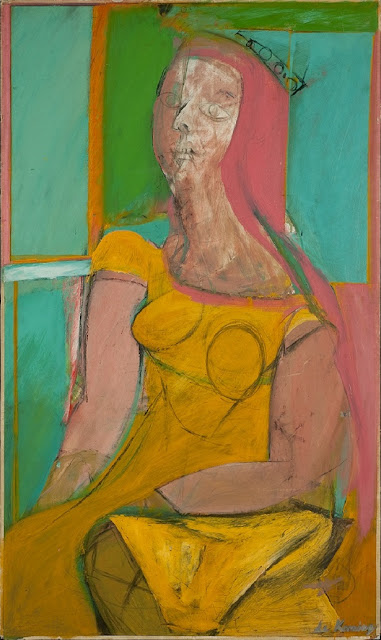 Willem de Kooning, Queen of Hearts, 1943–46
De Kooning labored during the 1940's on a series of strikingly-colored portraits, like Queen of Hearts, above. These works, however, have a curious feel of remaining uncompleted, of struggling to come into their own as individuals - and falling short of the mark.

During the years immediately following World War II, de Kooning finally achieved success with Abstract Expressionist works like Excavation (1950). This secured him a place in the elite ranks of the New York School, but he almost immediately distanced himself from "Ab Ex" by returning to painting portraits - or rather to "anti-portraits."

These of course are de Kooning's Woman paintings from the early 1950's. These works alarmed, angered, baffled and bemused almost everybody during the "Fifties". The examples on view in the Barnes exhibition show that they have lost none of their unsettling qualities, over a half century later.

What was de Kooning aiming at with the Woman series? Was there a thematic progression in the paintings, a developing sequence of meaning or message? If so, it is hard to trace. 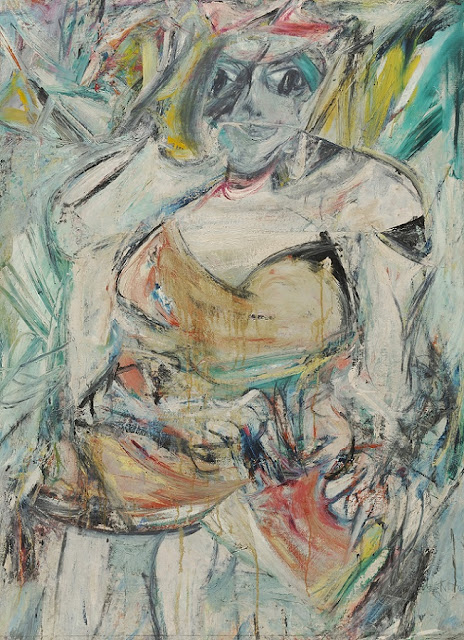 Woman II, painted in 1952, is almost a benign being, with an enigmatic smile and animated eyes, in comparison with the Gorgon-like frightfulness of Woman I. A year later, de Kooning raked-up the embers of ferocity and grotesque humor with Woman (1953). This was followed by an almost complete negation of humanity with Woman as Landscape (1954-55).

The critical debate on the Woman paintings continues, de Kooning having made a less-than definitive statement of his goals. The essays in the exhibition catalog treat this controversial phase of de Kooning's career with lucid insight. In terms of this review, it is enough to note that de Kooning's engagement with Soutine's oeuvre was at its peak during the years he devoted to the Woman series.

In 1950, MOMA mounted a major retrospective of Soutine's paintings, with many in the New York School quick to salute him as a pioneer of "Ab Ex". Two years later, de Kooning and his wife, Elaine, visited the Barnes Foundation, then located in the Philadelphia suburbs, to examine the Soutines which Dr. Barnes had purchased three decades earlier. De Kooning was struggling with Woman I and II. Studying Soutine's paintings at the Barnes led to a major breakthrough. De Kooning recalled this moment of inspiration:

I remember when I first saw the Soutines in the Barnes collection. In one room there were two long walls, one all Matisse and the other all Soutine - the larger paintings. With such bright and vivid colors, the Matisses had a light of their own, but the Soutines had a glow that came from within the paintings - it was another kind of light.

"A glow that came from within" the paintings! What an absolutely marvelous image - verbal and visual!

This "glow" was something that de Kooning had to see for himself when he ventured to the Barnes Foundation to study the Soutines. This "glow" is certainly In de Kooning's works, too, especially in the abstract landscapes and "untitled" works which preoccupied him after he completed the Woman series in 1955. 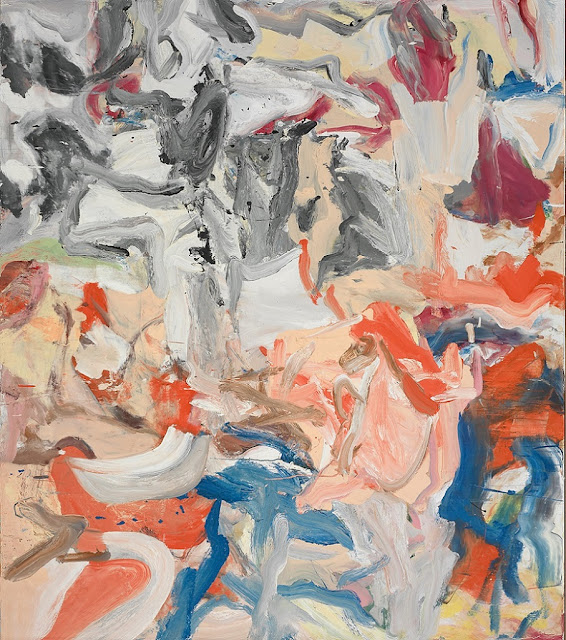 The "glow from within" in de Kooning's paintings is almost impossible to appreciate when looking at a book illustration, even high quality color representations, as appear in the Soutine / de Kooning catalog. Seeing them, up-close and in-person, is a different story. I discovered this when I went to the massive, "once-in-a-lifetime" retrospective of de Kooning's art presented by MOMA in 2011. I was staggered by the experience, in a way that was - and is - difficult for me to articulate.

This brings us back to the importance of the Soutine / de Kooning exhibition. Not only does the exhibit illumine a little-studied chapter of art history, but it enables art lovers to join in the "conversation in paint" between Soutine and de Kooning. 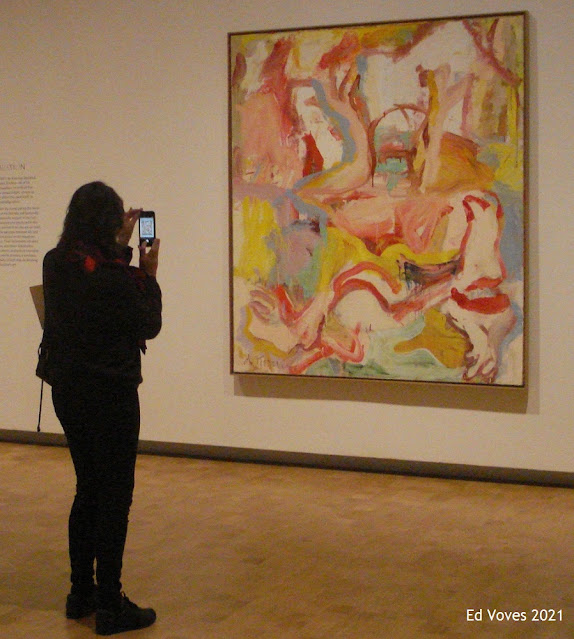 Without the opportunity to directly engage with art, the most vital link in the creative process is shattered. Thanks to the joint efforts of the curatorial teams of the Barnes and the Orangerie, that link has been reforged.

As I walked around the galleries of Soutine / de Kooning at the Barnes, I could feel the "glow from within" being rekindled. It was there in the works of art by Soutine and de Kooning and, now, it was sparking to life in the minds and hearts of people like me, who were blessed with the opportunity to visit for the press preview. 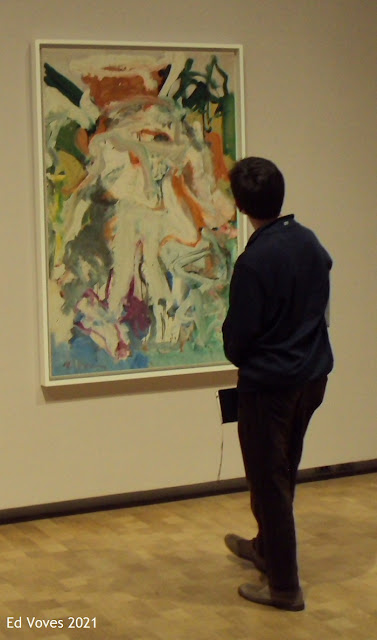 This was a moment to savor, an opportunity to reflect on de Kooning's definition of the nature of art, one of the simplest, yet most profound, statements that I know of:

“What you do when you paint, you take a brush full of paint, get paint on the picture, and you have fate.”

Posted by Art Eyewitness at 5:06 PM