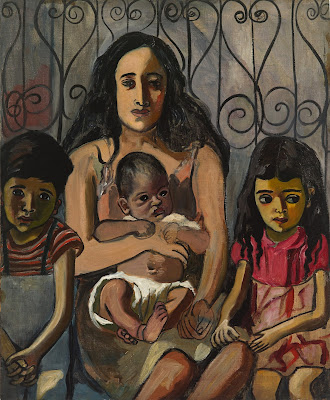 Alice Neel waited until very late in her life to paint a formal self-portrait. Neel was seventy-five when she started, soon giving-up on the work, only to resume and complete it five years later, in 1980.

Neel's Self-Portrait was - and is - an unsettling work. It is unsparing, unsentimental, uncompromising. The list of "un's" keeps growing the longer you look at it. 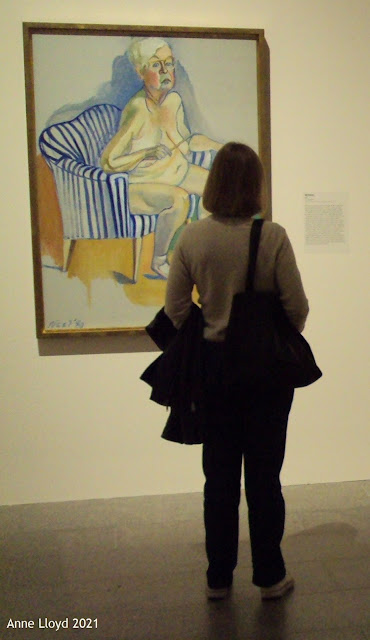 Neel portrayed herself in the nude, without any attempt to minimize or gloss over the ravages of time on her aging body. But the indomitable look in her eyes is the most striking feature of this work. With only four years left to live, Neel stared Death in the face, in order to fix the image of herself for the world to remember. 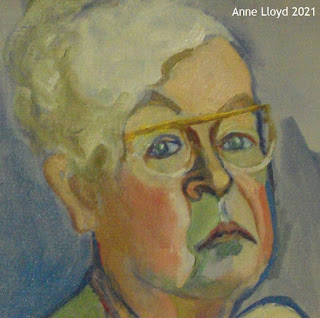 Anne Lloyd, Photo (2021) Detail of Alice Neel's Self-Portrait, 1980
This remarkable work of art is now on view in a magnificent exhibition at the Metropolitan Museum of Art. The Met's exhibit is the first in twenty years to examine Neel's entire career in detail and it does justice to her life-long determination to live and paint her way.

It is singularly appropriate that the Met should mount an exhibition of the life and work of Alice Neel (1900-1984) at this troubled moment when so many are struggling. For the most part, Alice Neel focused on individual people or very small groups of people facing life's challenges. 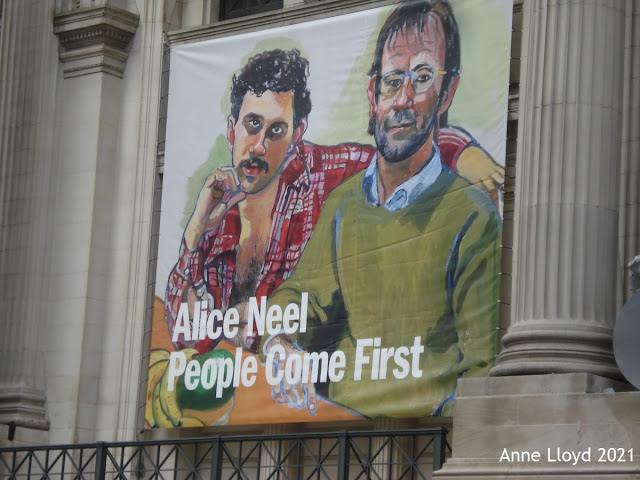 Every person is a new universe with its own laws emphasizing some belief or phase of life immersed in time and rapidly passing by.

With the Covid-19 pandemic crisis entering its second full-year, people are starved of the human interaction or opportunity to express their individuality which we see depicted in Neel's paintings. It was truly wonderful to see the visitors to the Met's Tisch Gallery, where the Neel exhibit is displayed, relating to each other, as well as the masterpieces on the museum walls. This humane environment is something many of us took for granted before the pandemic - and hopefully will not do so again. 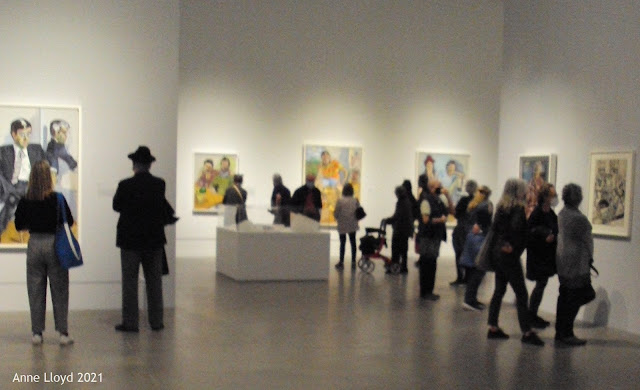 Neel seldom took anything for granted. It needs to be acknowledged, however, that the difficult circumstances of her life gave her few opportunities to rest on her laurels.

Alice Neel was born in Merion, PA, at the turn of the twentieth century. Merion is a suburb of Philadelphia. Neel, who showed  artistic promise from an early age, attended the Philadelphi School of Design for Women (now Moore College of Art), 1921-1925. The same year of her graduation, she married a Cuban artist, Carlos Enriquez, whose portrait by Neel appears in the Met exhibition.

For a brief period, Neel's future seemed one of promise. Then, in 1927, her young daughter died. Neel suffered acute depression, culminating in a nervous collapse and an attempt to take her own life. Estranged from her husband, Neel faced the Great Depression with little to sustain her, except occasional sales of her work. Then, in 1933, she secured on-again/off-again employment with the Public Works of Art Project which operated under the direction of Juliana Force of the Whitney Museum.

Painting and devotion to social justice issues helped Neel survive the hard times of the 1930's and 1940's. The range of her work during this period, often gritty and brutally honest, is well illustrated by the works on view in the Met exhibit. Neel's cityscapes of New York and her portraits of neighbors and friends in Spanish Harlem reveal her talent for realism and her penetrating insight into human character.

Focusing on two early portraits, Kenneth Fearing and T.B. Harlem enables us to grasp the wider implications of Neel's oeuvre. 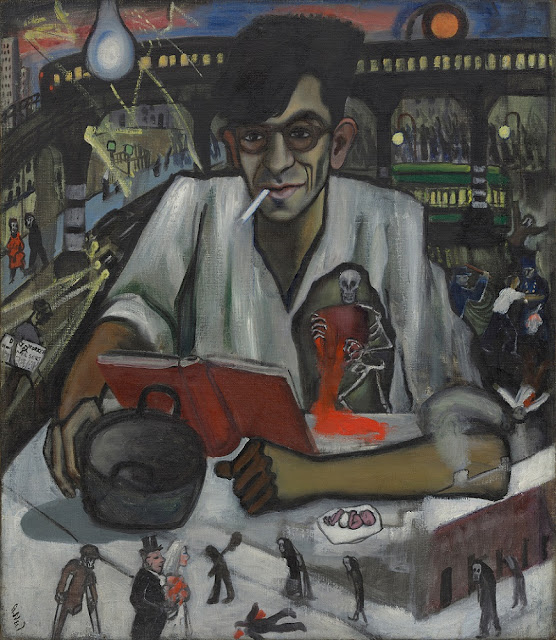 Kenneth Fearing, painted in 1935, combines realism with elements of Symbolism and Surrealism. Against a background similar to her cityscapes, Neel portrays Fearing, a prominent left-wing poet and writer, surrounded by diminutive figures from his verses. Here, enlightenment, conjured in the vision of a light bulb, combined with elements of horror and fantasy. The skeleton holding Fearing's bleeding heart seems utterly in keeping with Fearing's character and the tenor of his socially conscious writing. 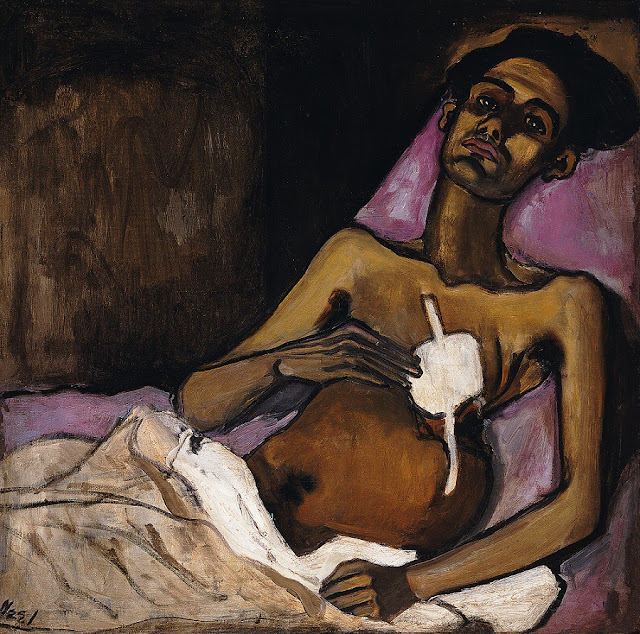 The stark reality of T.B. Harlem (1940) needed no embellishing details. The searing portrait of this dying victim of tuberculosis told its own tale and people of the time would have recognized the bandage over his chest as the result of the medical procedure to treat a collapsed lung of the T.B. patient by removing part of his rib cage.

The martyred protagonist of T.B. Harlem was Carlos Negron, brother of Neel's lover/companion during the late 1930's, José Negron. The haunted look in the eyes of Carlos is so overwhelmingly powerful and compelling that we, today , might well miss the point that his bandage is placed exactly where the skeleton and bleeding heart were positioned in Kenneth Fearing.

Did Neel herself make the connection in these two wounded breasts, painted five years apart? Perhaps not, but suffering, physical, emotional, psychological, runs through Neel's work like an electrical current over the long years of her career.

Another terrible torso scar appears much later in what is Neel's most famous portrait, that of Andy Warhol. Neel painted Warhol in 1970, following the  assassination attempt by Valerie Solanis. The portrait was done at Warhol's request, rather than Neel's. This is significant for it shows that Neel, after years of neglect during the high tide of Abstract Expressionism, was gaining a measure of celebrity. It also explains the ambivalence in the portrait, so different from the spirit of T.B. Harlem.

Warhol and Neel did not clash during the painting session, but the closed eye stance of Warhol may partly reflect an awareness that he and Neel were not kindred souls. In fact, Neel felt a powerful antipathy to Warhol's "brand", if not to him personally. 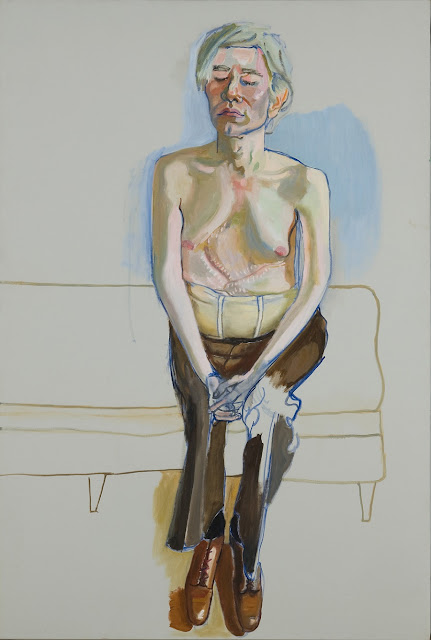 Warhol, "as an art-world personality...  represents a certain pollution of this era," Neel stated bluntly. "I think he's the greatest advertiser living, not a great portrait painter."

Yet, in this depiction of the physical evidence of violence, Neel brilliantly captured the pain behind Warhol's averted eyes. There are moments and memories of suffering so intense that we have to close our eyes or look away. We need to do so in order that we can reconnect with our injured humanity and to grapple with the inescapable fact of our mortality.

Pondering over human individuality and the complex emotions of the portrait sitters comes thick and fast in Alice Neel: People Come First at the Met. Indeed, it is almost impossible not to engage with Neel's portraits without deep reflection. And that is true of her cityscapes, as well, despite the seeming lack of inhabitants. 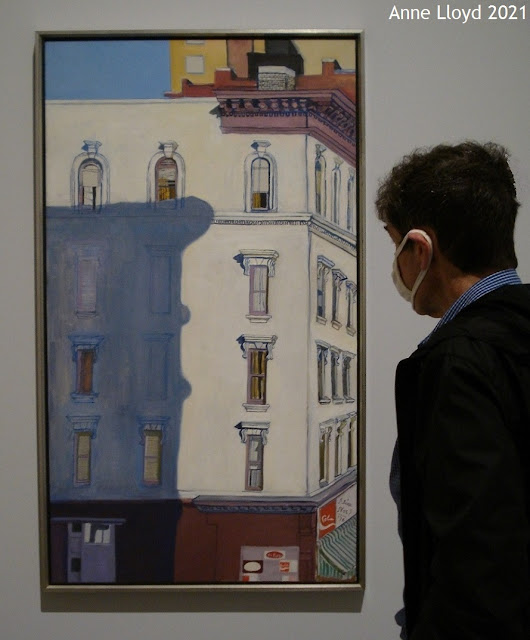 Spend a few moments looking at 107th and Broadway, painted in 1976. There are people behind those windows - you can feel them, sense their eyes peering back at us.

The same can be said of the shadow of a neighboring building as it is cast on the white-hued structure which otherwise engulfs the picture plane. There is a human presence in this ghostly form. It may seem ominous, at first, until we become aware that the shadow is of the building where Neel lived and worked during her final years of life.

These were the years when Neel finally achieved the recognition she deserved. With the long years of struggle behind her, she might have settled back and painted portraits of the "rich and famous." But the ordeal of her early career resonated with Neel for as long as she lived. A woman of great wit and earthy sensuality, Neel's empathy was greater still.

I felt this strongly as I moved back and forth, looking at three late-career portraits of mothers and their infant children: a Hindu woman and her child, Neel's daughter-in-law, Nancy and her twin daughters, and lastly, Carmen and Judy, painted in 1972.

There was something incredibly poignant about Carmen and Judy. I could not quite fathom it, until I read the "backstory" of this modern-day Madonna and Child. Carmen Gordon, whose face is frozen in a look of desperate hope, was the Haitian woman who worked and cared for Neel in her later years. Judy, underweight, listless and struggling, was Carmen's baby daughter. She died, tragically, soon after the painting was completed. 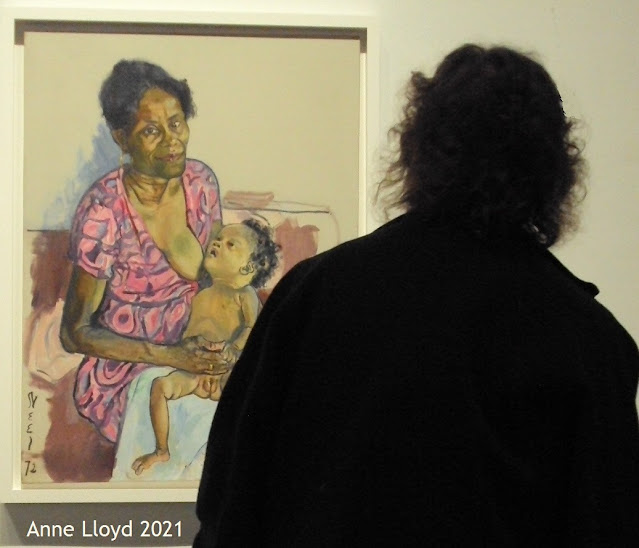 Neel must have sensed, along with Carmen, that the baby was at risk. The feeling of life's preciousness so infuses this work that the bond between a mother, who had lost her daughter in 1927, with one who was about to lose her child in 1972, was already firmly established.

This gift of empathy, so evident in Carmen and Judy, was Alice Neel's greatest gift. And it remains, long years after Neel's death, a gift to us. Ours for the taking, should we choose to accept.

Posted by Art Eyewitness at 1:58 PM