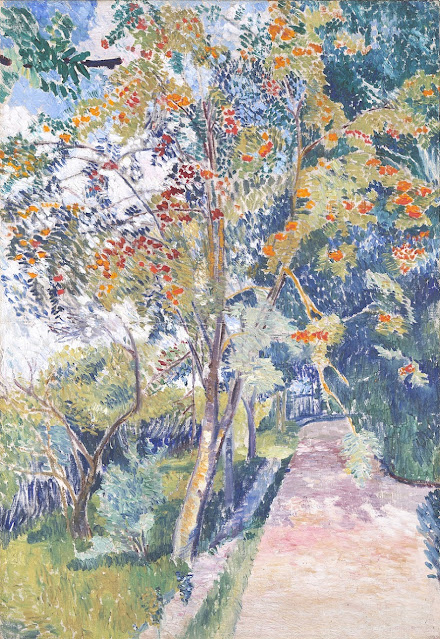 Impressionism in Russia: Dawn of the Avant-Garde

Impressionism in Russia: Dawn of the Avant-Garde, recently published by Prestel, explores a little known chapter in art history. It is so "little known" that many art enthusiasts in the West are likely to be unaware that it ever took place. This episode is the story of Russian painters in the late nineteenth and early twentieth centuries who actively embraced Impressionism as their chosen creative technique.

Impressionism, it should be emphasized, has long been recognized as a major force in Russian art. Several of the great masters of Russian painting during the late 1800's, notably Ilia Repin and Isaac Levitan, incorporated elements of Impressionism in major works of art. 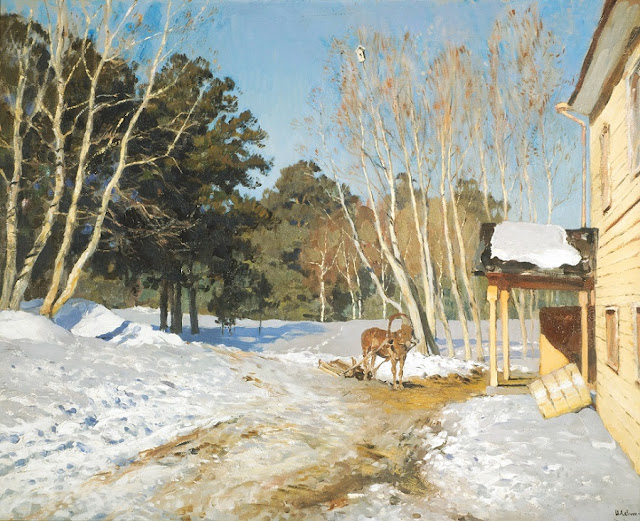 Even more well known in the saga of Impressionism is the role of two of Russia's great art connoisseurs, Ivan Morozov (1871-1921) and Sergei Shchukin (1854-1936). These two industrial magnates amassed astounding collections of Impressionist and Post-Impressionist paintings. Later, they graduated to Fauvism and Cubism, Shchukin buying works by Matisse and Picasso by the roomful.

Neither of these developments, however, translates to a Russian Impressionist movement or school of painting. Yet, as the Prestel book and the related exhibition demonstrate, Impressionism did secure an important place in Russia by the 1890's, continuing to the outbreak of World War I and a brief revival in the late 1920's.

Impressionism in Russia: Dawn of the Avant-Garde, as the book's subtitle proclaims, promoted new attitudes to visual expression which resulted in bold - and bewildering - art forms in the years leading up to World War I. 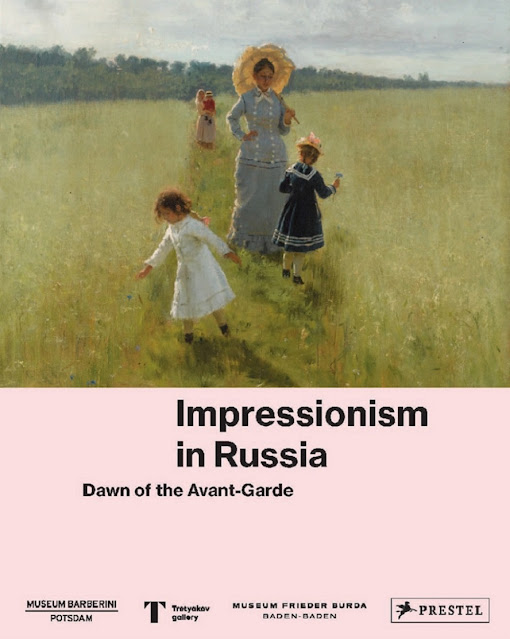 Impressionism in Russia: Dawn of the Avant-Garde is being published in conjunction with a major exhibition to be held at the Museum Frieder Burda, Baden-Baden, Germany, March 27-August 15, 2021. The exhibition, which just completed its initial showing at the Museum Barberini, near Berlin, is not scheduled to appear in the United States. Sadly, given the ongoing tensions between the U.S. and Russia, as well as the difficulties imposed by Covid-19, it is unlikely that these "little known"  masterpieces of Russian Impressionism will be seen in the U.S. any time soon.

For the present, American lovers of Russian art, like myself, will have to content ourselves with this volume from Prestel. Impressionism in Russia: Dawn of the Avant-Garde, I am happy to relate, is an outstanding book, both in terms of its scholarly, and generally well-written, essays and the superlative color tones and graphic quality of its illustrations.

The sheer number of Russian artists who painted - or at least experimented - in the Impressionist style might make for some difficulty for readers who are not familiar with Russian art. However, another feature of this outstanding book is the group of short biographies of these artists, each with a small portrait photo. Whenever I found myself challenged by the cast of unfamiliar characters, I consulted these "bios" and was immediately back on track

The story of Russian Impressionism begins with the exploratory efforts by Ilia Repin who visited France on a government-subsidized scholarship,1873-76. Repin (1844-1930) witnessed the first Impressionist Salon in 1874. The example of Monet, Renoir and their colleagues led him to try his hand on a major Impressionistic painting. Repin's Parisian Cafe, which he completed in 1875, was subjected to a barrage of criticism, for reasons we will discuss below, when news of his "impertinent" painting reached Russia.

The classic phase of Russian Impressionism commenced in 1887 when Valentin Serov, who had trained under Repin, painted a tremendous portrait in the Impressionist style, Girl with Peaches. The subject of Serov's work - one of the greatest of all Russian masterpieces - was the daughter of the railroad tycoon, Savva Mamontov, whose rural estate at Abramtsevo was the epicenter for trend-setting art and music in Russia.

Serov's success with Girl with Peaches (which is not included in the exhibition) led him to experiment further with Impressionist portraiture. In terms of his works on display in the exhibition, In Summer, painted in 1895, is the "show-stopper."  I had the great fortune to see this magnificent painting in an exhibition at London's National Portrait Gallery in 2016. 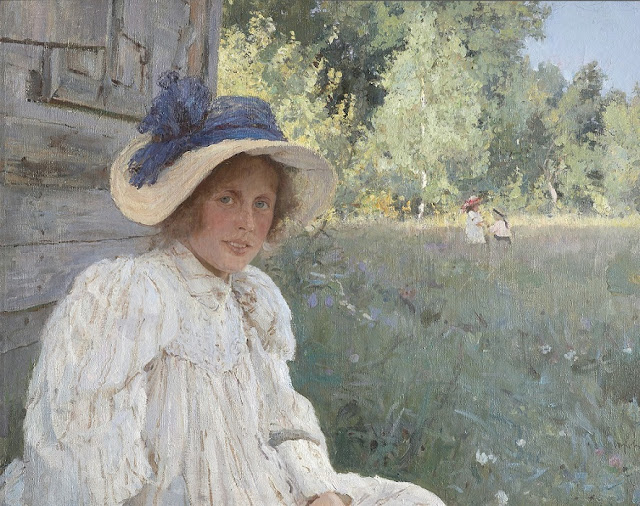 The protagonist of this enthralling work was Serov's wife, Olga, with whom he shared a profound and abiding love. Radiating vitality and inner beauty, Olga regards her husband with that look of conjugal intimacy which only deeply-engaged spouses truly know. In the background, the two Serov children play, highlighted by the glistening golden light of a summer's day. If it is possible for an artist to convey a sense of paradise, of heaven come to earth, Serov did exactly that.

A quiet joie de vivre infuses In Summer. A similar sense of well-being characterized the entire oeuvre of Konstantin Korovin, a close friend of Serev. Korovin (1861-1939) was the Russian artist most committed to Impressionism. He brought an Impressionist facility and freedom of brushstroke to every genre he set his hand: portraits, still-lives, domestic scenes and landscapes.

Korovin spent a considerable amount of time, living and working, in France. While his street scenes reveal the evidence of his study of Pissarro's handling of urban locales, Korovin painted bold statements of his own about the dynamism of city life. 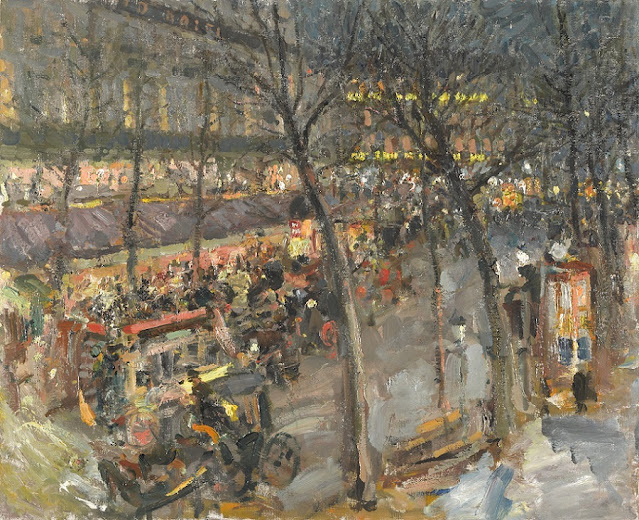 Korovin's 1906 work, Paris: Cafe de la Paix is very different in approach from Repin's Parisian Cafe which was notable for its carefully delineated protagonists. Korovin's surging throngs, on the other hand, appear -at first - as faceless nonentities. Yet, so great is the sense of life, of movement, of elan vital in this remarkable picture, that the more we look at the tide of humanity, the more the humanity of each of the members of this crowd is indelibly established.

Korovin wasn't the only Russian artist to a paint superb Impressionist scenes set in Paris. Nicholas Tarkhoff was so highly successful that he settled in France, selling several works to the French government. But Russian artists who chose foreign subjects for their works or stayed too long away from their homeland risked triggering the ire of the Russian art establishment.

Two individuals towered over the cultural scene in Russia during the last half of the nineteenth century. Pavel Tretyakov and Vladimir Stasov were both high-minded and generous men, whose patronage was crucial for young artists.

Tretyakov's vast expenditures on art laid the foundation for the great national collection of Russia, which bears his name. Pavel Tretyakov (1832-1898) came from an Old Believer family, a Christian sect which had suffered terrible persecution under Peter the Great for refusing to follow his reformed version of the Christian liturgy. Tretyakov purchased Russian art, almost exclusively, thus proving that the Old Believers were patriotic subjects of the Tsar.

Vladimir Stasov (1824-1906) was an even more redoubtable figure. An ardent Russian patriot, he was unstinting in his support for artists and musicians, provided that they adhered to the style known as Russian Realism. The subject for a painting (or a symphony or opera) needed to have some connection to Russian history or culture. Those who strayed, as Repin did with his Parisian Cafe, mentioned above, soon received a rebuke from the "Master" as Stasov was called.

It is a measure of Stasov's authority, that Repin trimmed his sails and generally conformed to the nationalist agenda for Realist art upon his return home. Significantly, the Impressionist paintings which Repin created once he was back in Russia were for private viewing rather than public consumption. 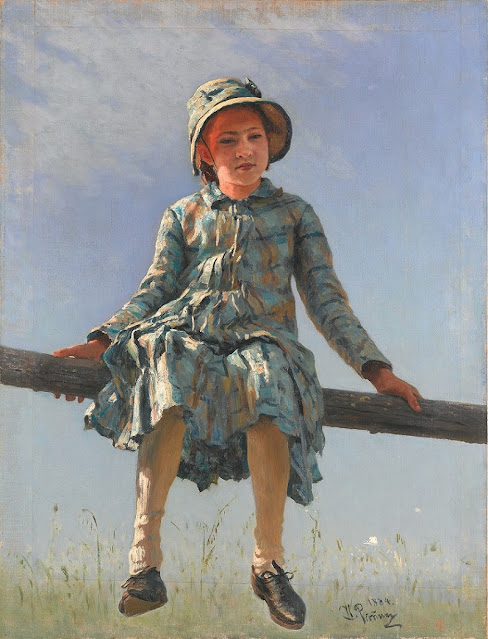 Dragonfly, Repin's portrait of his daughter, Vera, is a tour de force depiction of the swiftly-changing effects of light and shade as experienced during a playful romp in the fields. It validates Impressionism, in theory and in practice, for as Repin noted "without the freshness and power of impression, there can be no truly artistic work."

The criticism of Impressionist works like Dragonfly seems hard to fathom today. The negativity toward Impressionism in Russia, however, was motivated by serious concerns unrelated to matters of painterly style.

Many Russians during the late 1800's felt that internal factors were destroying their nation from within. The list of problems was indeed long: the delay in freeing the serf class (only achieved in 1861), the failure to implement a national legislature, dreadful working conditions in the new industrial zones. The social crisis intensified after the assassination of Tsar Alexander II by anarchists in 1881.

The idea of patriotic writers like Stasov that art and music should promote Russian national unity was well-intended. But ultimately it was doomed to failure. The confrontation of Russian Realism vs. Impression is neatly contrasted in Stanislav Zhukovsky's Joyful May (1912). The dark, brooding interior of a Russian country estate, dominated by two aristocratic portraits, struggles unavailingly to keep the beckoning light of spring at bay. 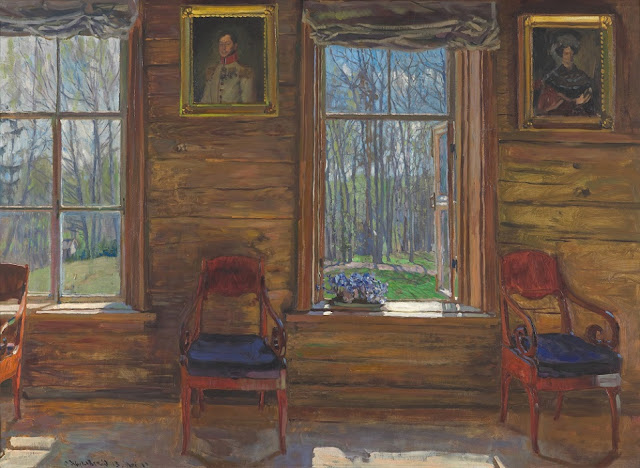 The reaction, verging on rejection, to Stasov's cultural nationalism, came with the young, radical artists of Russia's Silver Age, 1900-1914. As the names of Mikhail Larionov, Natalia Goncharova and Kazimir Malevich figure prominently in the history of Modernism, is a bit of a surprise to read that these revolutionary figures started their careers as Impressionists.

Yet, they did and this new insight helps explain their progress from painting works that compare favorably with van Gogh and Signac to "shock of the new" movements like Rayonism and Suprematism.

The course of the Russian "experiment with art" can be appreciated by comparing two paintings by Natalia Goncharova (1881-1962). The first, Rowan: Panino near Viazma, 1907-08, is the introductory image of this review. It integrates a Fauvist color scheme with the hallmarks of classic Impressionism.

Within five years, Goncharova had abandoned her accomplished Impressionist style for the Abstract methodology of Rayonism, as seen in The Forest (1913). Rayonism, initially set forth by Larionov, was based on scientific theories on how rays of light are reflected from objects in the viewer's field of vision.

Rayonism, like most of the radical artistic ideologies of the pre-World War I era, came with its own manifesto. The strident words of the manifesto sought to explain - and justify - the "dissolution" of the objective reality on the artist's canvas.

Rayonoism sounded the death knell of Stasov's Russian Realism. It aimed to promote a new dynamism in art, clearing the way for freedom of thought and expression. Goncharova made the bold leap to Rayonism, as can be seen in the glaring contrast of The Forest with her earlier Impressionist works. The trees in The Forest no longer bask calmly in the gentle sunshine, as in Rowan: Panino near Viazma. Instead, they assert themselves, propelling themselves upward from the forest floor, reaching toward a sky filled with rays of light and currents of air.

How much of Rayonism was understood by the people of Russia, - or even intellectuals like Goncharova - is a matter of speculation. What can be asserted is that Impression in Russia had made a crucial impact, enabling artists like Goncharova to depict the world before her, as she saw fit.

And what Goncharova evoked in The Forest was momentous indeed. The trees in the painting are being buffeted by the wind and soon, in 1917, Russia itself would be shaken by a gale force storm, the wind of Revolution.