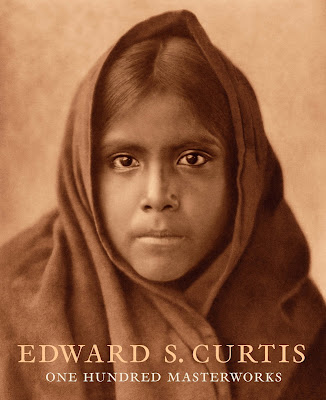 If I were asked to select one artist to represent the American experience or what Robert Hughes called "American visions,"  I would pick the photographer, Edward S. Curtis.

Pages and pages of explanation for my choice would never suffice. But even a brief perusal of the new book, Edward S.Curtis: One Hundred Masterworks, will quickly confirm Curtis as a defining genius of American expression.

Edward S. Curtis was the self-appointed champion of the Native American peoples of North America. Curtis, born in 1868 in Wisconsin and reared in Minnesota, was a bona fide Western pioneer. Like earlier frontiersmen, Daniel Boone and David Crockett, Curtis had an empathy for Native Americans which enabled him to see them as human beings rather than as savages.

With his camera, Curtis recorded the traditional way of life of tribes from the Arctic Circle to the Rio Grande. The result of his determination to pursue this challenging - and occasionally dangerous - task is the subject of this compelling  book  published by Delmonico and Prestel.

The photographs comprising Edward S.Curtis: One Hundred Masterworks represent the "best of the best" taken by Curtis.  In the multi-volume The North American Indian, the career-defining work of Curtis, there were 2,234 photographs richly produced in photogravure. The quality of the One Hundred Masterworks photos is worthy of the now legendary earlier effort, produced in a limited run of 300 copies of each volume.

It needs to be highlighted and underscored that Curtis, a largely self-taught photographer, was not only an artist of the first rank. He was also a driven, obsessive picture taker and a methodical ethnographic researcher. Curtis was known as "Shadow Catcher" to the Native Americans he photographed. Between 1896 and 1927, Curtis captured 40,000 "shadows," a staggering 40,000 photographs. 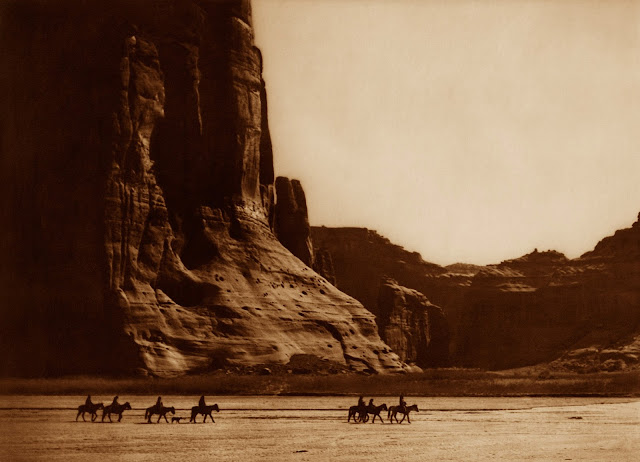 The law of photographic averages or being "at the right spot at the right time," however, does not account for astounding images like Canyon de Chelly - Navaho, 1904, or Sioux Mother and Child, taken a year later. Curtis entered into a state of spiritual communion with those he photographed. There are 40,000 souls in the pictures Curtis took - and the soul of America.

Six years before Curtis began his quest, the last "stand" of Native American resistance to the loss of their independence took place in the infamous "battle" at Wounded Knee, South Dakota on December 23, 1890. Three years later, at a meeting of the American Historical Association, Frederick Jackson Turner delivered his "frontier thesis" which explained U.S. history in terms of the westward expansion of Anglo-Saxon society from the Atlantic to the Pacific oceans.

Where the original inhabitants of North America were to fit into the post-frontier scheme of the U.S. was a loaded question. Many people expected the "Red Man" to simply vanish. Rapid demographic decline among Native Americans in the years following Wounded Knee seemed to confirm this. In 1900, there were only 248,253 Native Americans living in the continental U,S., while the estimate in 1800 had been 600,000, almost certainly an under count. 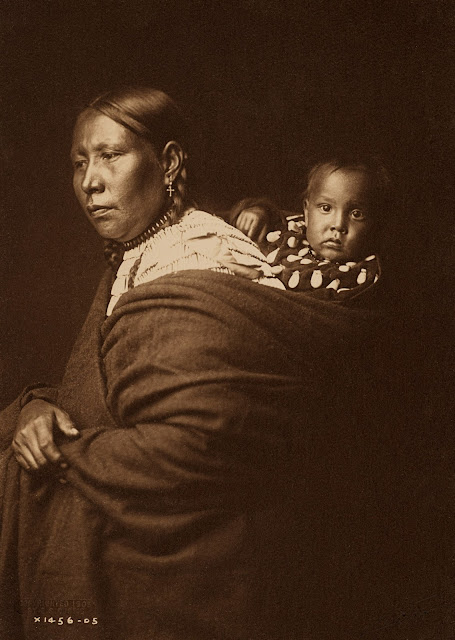 
Given the explosive rate of population increase in the U.S. by natural birth alone during the nineteenth century, the days of the Native Americans as a separately identifiable racial group seemed numbered. Even Curtis, for all his spiritual kinship with Native Americans, half-expected this to happen. Some of his most haunting images have titles like The Vanishing Race - Navaho, 1904.

The "Red Man" did not vanish. Thanks in large measure to Curtis, Native American culture was documented and to a considerable degree preserved. A series of richly produced photographic volumes, The North American Indian, introduced Curtis' stunning images to collectors and the public beginning in 1907.

In just over thirty years, Edward Curtis conducted a single-handed campaign to save some vestiges of the traditional way of life of Native Americans from oblivion. Adept at still photography and motion picture camera work, Curtis created imagery that is enchantingly beautiful and historically accurate. With grudging financial backing from J.P. Morgan and the emotional support of President Theodore Roosevelt, Curtis forged ahead. 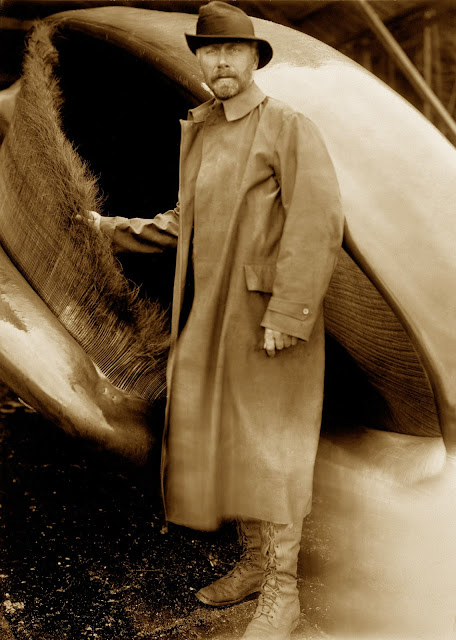 
Against incredible odds, Curtis succeeded in publishing the last of the lavishly produced photo books in 1930. Publication was literally in the "nick of time" because many of the "old ways"  of the tribes had been undermined and effaced by U.S. Government agents and Christian missionaries in the years since Curtis commenced his venture in 1896.

It was a bittersweet triumph for Curtis. The Great Depression began in earnest just as the final volumes of his magnum opus came off the press. Curtis had beggared himself in the process, wrecked his marriage and endangered his health.  Few people had the money to purchase his books or copies of his photos - or even cared to.

Curtis scratched out a living for himself doing still photography and some motion picture work for the Hollywood studios. He worked on The Plainsman starring Gary Cooper, one of the rare adult Westerns of the 1930's. Curtis tried his hand at some wildcat mining schemes and died in obscurity in 1952.

Curtis and The North American Indian nearly vanished from collective memory. Then in 1971, the Morgan Library in New York City mounted an exhibition of Curtis' works, based on the financial support which J.P. Morgan had provided. Scholars took note and slowly Curtis' astonishing achievement began to be realized.

The present volume and the related museum exhibits of Edward Curtis' "masterworks" are the result of the devoted study of one of these scholars. Christopher Cardozo is the leading contemporary authority on Curtis. Cardozo has created an impressive collection of the photographs taken by Curtis, authored or edited eight books about Curtis and curated major exhibitions in museums and galleries around the world.

The North American Indian was notable for Curtis' scholarly text as well as his stunning photographs. The same is true of Edward S.Curtis: One Hundred Masterworks. Cardozo and fellow historian, A.D. Coleman, have provided a brilliant assessment of Curtis as a photographer, ethnographer and environmentalist. 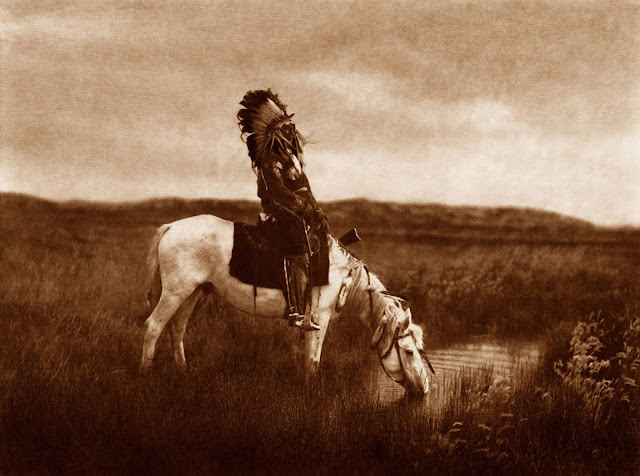 Edward S.Curtis, An Oasis in the Badlands,1905

Coleman  notes perceptively that Curtis' photographic style occasionally reflected the Pictorialist school of photography and Alfred Stieglitz's journal Camera Work, both influential during the early 1900's. Certainly, the deliberately romantic poses of a small sample of the photos in The North American Indian like An Oasis in the Badland - Sioux, 1905 showed that Curtis was a man of his own time.

Yet Cardozo cogently argues that "Curtis' pictures transcend by far the merely informational and illustrative: they can stand alone as autonomous, fully realized works of visual art."

The importance of the individuality of the subjects of Curtis' photos cannot be stressed too much. The Native Americans who posed for Curtis emerge from his pictures as "autonomous, fully realized" human beings. This is in contrast to the pseudo-scientific titles that Curtis occasionally bestowed on some of the photos like "Lummi type" or "Kalispel type." Perhaps, he did this to satisfy the sociologists of his era, fixated on finding representative samples of the world's inhabitants. 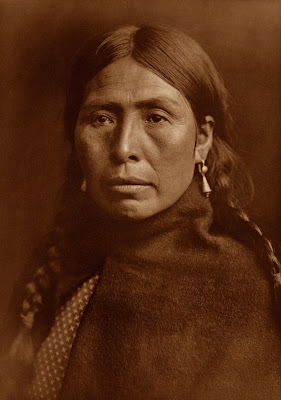 
Yet, when you stop to examine the strong, sensitive face of this matriarch of the Lummi tribe, you realize the absurdity of any attempt to categorize human beings as "typical." This woman came from Curtis' home ground, on the coast of Washington State. She was in essence a neighbor. One can only wonder why he did not record her name or devise a romantic-sounding title for her as did for others.

Whatever the reason, the unique, God-given self-hood of this Native American woman rips asunder the straight jacket of categorization in any shape or form. And you have to give Curtis part of the credit for this. Curtis, a master of the techniques of photography, was equally adept at capturing  the spiritual essence of his subjects and conveying this to us, the viewer.

Louise Erdrich and Eric Jolly both emphasize this shared experience in their essays in Edward S.Curtis: One Hundred Masterworks.  It should be noted that both are Native Americans. Jolly writes: 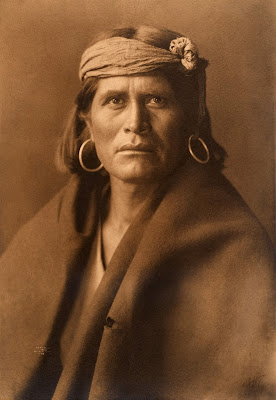 
Look into the eyes of Qahatika girl and A Hopi Man and recognize that they are looking back at us across time. These are haunting images that depict pride, strength and a sense of a future, that give us hope for the generations to follow ... As you experience the stories that emanate from these photographs, you have a rare opportunity to connect across time and generations to the heart and soul of these people. In so doing, you too may become stewards of their story. In the end, this work is breathtakingly, though simply, a collective act of stewardship.

This brilliant insight is really the best way - perhaps the only way - to interpret Curtis' achievement.

Curtis, remarkable individualist though he was, helped to create a bond of empathy between racial and ethnic groups that was held by many in his time to be unbridgeable. And this achievement is rendered even more extraordinary by the way that he fostered an "intensity of regard" between generations, past, present and to come, as Louise Erdrich also wisely discerns.

Perhaps without quite knowing it, Edward S. Curtis, the last pioneer from the Old West, was the first to explore an America without frontiers, an America whose people are truly "from the many ... one."

Posted by Art Eyewitness at 9:12 PM