Audubon to Warhol: The Art of American Still Life at the Philadelphia Museum of Art 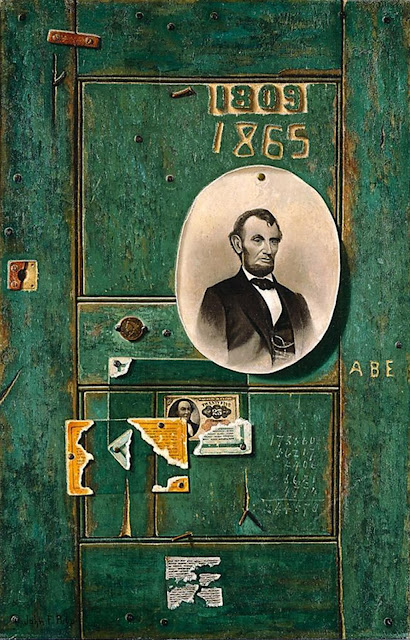 Audubon to Warhol: The Art of American Still Life

There are two basic ways to interpret the brilliant new exhibit on American still life painting at the Philadelphia Museum of Art, Audubon to Warhol.

The first and most obvious way is to simply enjoy the beauty and virtuosity of the vast array of still lifes in the Philadelphia exhibit. Some of the artists involved may not be familiar names. The art works that have been put on display, however, are first class from start to finish.

The second approach entails abandoning the idea that still life painting is a sideshow to the "center stage" display of portrait, landscape and abstract painting. Still life art, as is evident in Audubon to Warhol, is not "Sunday painting." The skill and proficiency of these works is often astonishing and their implications for American life and society are equally profound. 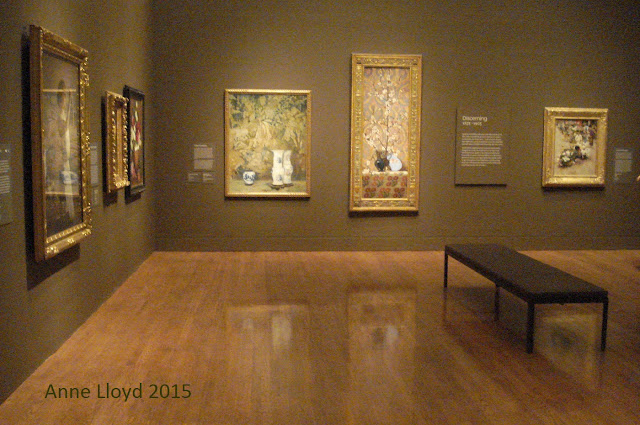 Anne Lloyd, Gallery View of the Audubon to Warhol Exhibition, 2015

Still life goes back a long way in art history, right back to the Egyptians. The French call still life painting "nature morte." With the prevalence of rabbit carcasses, boiled lobsters and cuts of beef, it is easy to see still life as dead nature.

Still life is often viewed as a celebration of conspicuous consumption and painterly skill. Quite frequently, nature morte had ominous, moralizing implications. The dead, trussed-up rabbit (often with an open accusatory eye) is a warning. Alive one moment, dead the next. Take heed.

American artists embraced these classical European traditions of still life. In fact, American painters from the early Republic era like Raphaelle Peale demonstrated levels of sophistication and subtlety in still life painting that often surpassed European artistry. Peale's Blackberries shows a command of shadows and reflected light as great as any Dutch master of the 1600's. 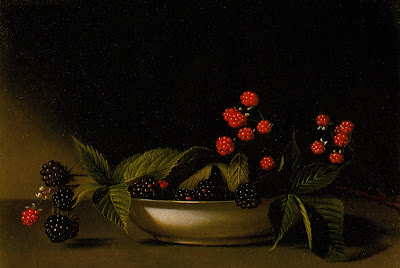 Blackberries is a masterpiece of simplicity and deep thought. Peale deftly addressed the theme of the cycle of life without heavy-handed moralizing. The red, unripe berries emerge from the shadows, there are some red drupelets in the ripening berries in the center, while the fully ripe berries hang over the edge of the bowl ready to be plucked and consumed. 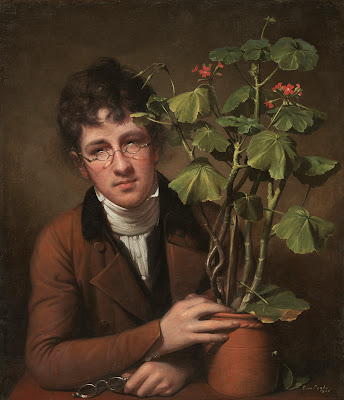 The wonderful family portrait of the Peales painted in the early 1770's by Charles Willson Peale, skillfully uses still life as an element of the larger whole. This tremendous work points the way to a later masterpiece, Rubens Peale with a Geranium, painted by his brother Rembrandt. The geranium plant, the first grown in the New World, "embraces" the young botanist, Rubens Peale, who fondly touches its terracotta pot. Nature and humanity, still life and portrait are combined in one of the truly great American works of art.

Along with the Peales, John James Audubon (1785-1851) set the tone for American art during the early Republic. Audubon was born on a sugar plantation in Haiti but grew up in France.  Audubon's father, fearing the great slave revolt which eventually erupted in Haiti in 1791, purchased a large farm near Philadelphia as a potential refuge. Audubon emigrated there as a young man and began his epic studies of North American wildlife that culminated in the nearly 500 life-size depictions of Birds of America.

One of the most striking examples of Audubon's avian art is on display, the beautifully hand-colored engraving, Carolina Parrot.  An objection might be made that Audubon's images of American birds can hardly be considered as a proper still life. Actually, Carolina Parrot is a still life in a grim way that Audubon could never have imagined in 1828. The colorful bird has been extinct since 1918, a case of "nature morte" in the extreme. 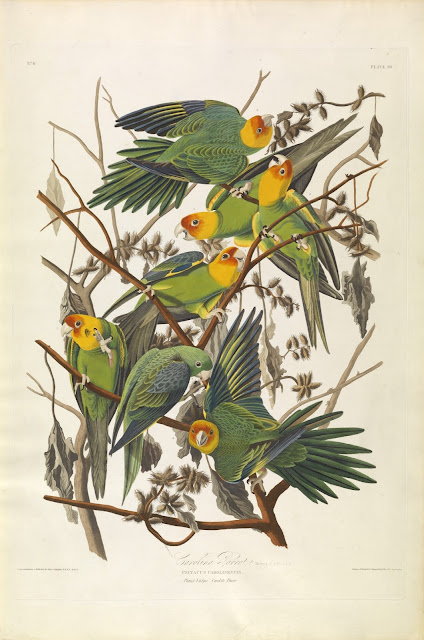 The Carolina Parrot or Parakeet (Conuropsis carolinensis)  was the only native parrot species living in the eastern regions of the United States, from Wisconsin to the Gulf of Mexico. It was hunted for its plumage to decorate hats and because it was considered a "pest." Its favored habitat was riverside woodlands, a prime area for development into human habitat.

The Carolina Parrot was a casualty of America's "Manifest Destiny." During the years 1861 to 1865, Americans paused from recklessly killing wildlife to shooting each other. The terrible human holocaust of the Civil War, now reckoned to be close to a million dead, is remembered in a moving still life, Reminiscences of 1865, the introductory image of this review. It was painted by John Frederick Peto in 1904, decades after the war's end.

Peto was born in 1854, too young to serve in the Civil War. But the staggering "butcher's bill" of the war and the shocking assassination of President Abraham Lincoln in its final days left a deep psychological imprint on every American who lived during that tragic era.

Peto studied at the Pennsylvania Academy of Art (PAFA) but the austere nature of many of his works, in this case a faded photo of the martyred Lincoln tacked to an battered door, struck a bit too close to home. Peto never achieved much artistic success, eking out a living playing the cornet in a Methodist camp band.

William Michael Harnett, Peto's friend and fellow PAFA student, was much more successful marketing his still life paintings. After the Hunt, of which Hartnett painted several versions, was a celebrated work of art in its day. Harnett's trompe l'oeil masterpiece did not just trick the eye; it tricked the mind's eye into thinking back to a simpler, happier, more "manly" age. 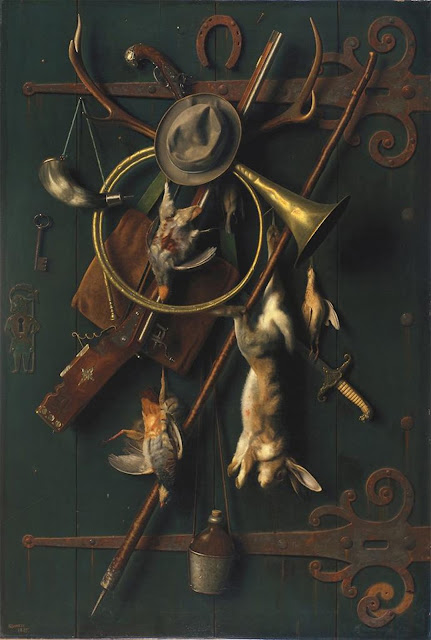 William Michael Harnett, After the Hunt, 1885


The halcyon era that Harnett evoked was the pre-Revolutionary War period. Beginning in the 1870’s, Americans began to indulge in a nostalgic interest in the early years of their country. The Colonial Revival, as it came to be called, embraced literature, architecture, craft design and the fine arts.

Every detail of Harnett's After the Hunt proclaims the virtues of "ye olde America." The venerable musket is a 17th century model, the powder horn and flintlock pistol are of 18th century vintage and the elaborate iron work of the door latches might well have graced the Hudson Valley estate of a Dutch patroon.  The world that Harnett evoked is one that Rip van Winkle would have felt comfortable in before and after his long nap.

It was a world, even as nostalgia, that could never last. American society is in love with motion and innovation. That was the direction that Charles Sheeler took still life painting in the early 20th century.

Sheeler was a collector of American folk art - notably Shaker furniture and hooked rugs - which he arranged as the setting for a series of interior scenes. These paintings are not included in Audubon to Warhol. Though major works of art, their omission is not a significant loss to the Philadelphia Museum exhibit. Sheeler's interiors are static where the works that are exhibited, Rolling Power and Cactus, are harbingers of action and movement. 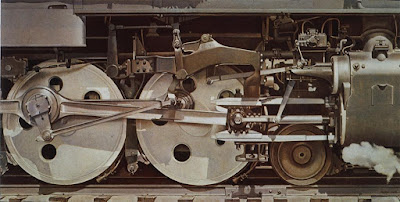 With Rolling Power, the pause before motion is obvious. Painted in tones that recall Sheeler's earlier commercial photography, Rolling Power also evokes the sepia-tone newsreels of the 1930's. When we look at this image, the wheels and disk driver of a Model J3A Hudson Thoroughbred locomotive, we almost expect the train that this engine pulled to lurch into movement and start to pull away from the canvas on its journey across America.

With Cactus there is no such certainty. The only thing without question about this unnerving painting is that it impels us - or rather repels - to escape its harsh, searchlight glare. 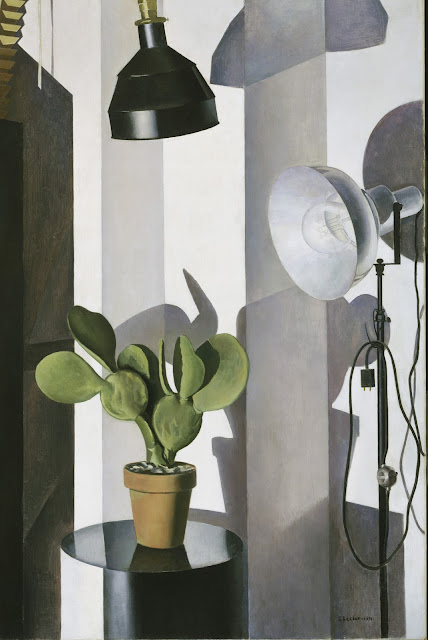 Cactus may well be one of the great Surrealist paintings in American art history. The idea of placing a cactus, a plant which has evolved over eons to live in an environment of unrelenting sunlight, under artificial light is positively absurd. Perhaps that is the point Sheeler was trying to convey.

Sheeler was a prominent member of the Dada-inspired group that gathered around Walter and Louise Arensberg, the great patrons of avant-garde art, during the 1920's. However, Sheeler was also the appointed propagandist for the Ford Motor Company's PR campaign with his photographs and paintings of Ford's River Rouge auto plant.

Which of these conflicting sides of his personality was at work when Sheeler painted Cactus, we'll never know. But this work reacted strongly against the kind of contemplative values of the great 19th century still life paintings. The trend continued as the 20th century unfolded, with major American artists painting still lifes that repudiated the talismans of modern life as well.

Following the Second World War, the sheer abundance of goods and services threatened American art. With “conspicuous consumption” virtually a secular religious rite, how could artists embrace an avalanche of the necessities of the good life? From the opposite vantage point, how could they find the means to reject a tidal wave of “things” that dulled human awareness and community spirit? How could American artists cope, pro or con, with Howdy Doody Time? 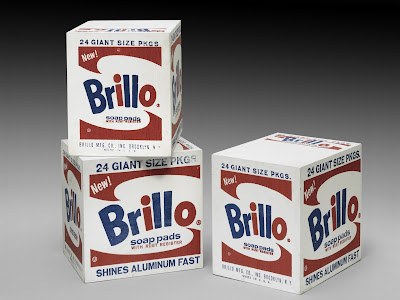 The answer was provided by Andy Warhol. Gigantic Brillo boxes or images of Campbell’s Soup cans were placed on a pedestal by Warhol. With an almost physical presence – as can be felt in the final gallery of the Philadelphia Museum exhibit – Warhol’s Brillo Boxes challenged the viewer to make a choice.

Andy Warhol brought American still life painting back, full circle, to Raphaelle Peale’s Blackberries. If we thoughtlessly consume the good things of life, the sense of blessing will be lost. If we meditate too long, the blackberries will rot.

The Philadelphia Museum of Art has once again mounted an exhibit which feasts the eyes. Audubon to Warhol also asks its patrons to make their choice. Peale, Peto, Sheeler, Warhol and all the other American still life painters pondered the living values of America through depictions of the valued objects of American life. What do these mean to us?

There are, of course, no definitive answers to the meaning of life, but it’s a question that we cannot dodge forever.

***
Text: Copyright of Ed Voves, all rights reserved
Images courtesy of the Philadelphia Museum of Art