Class Distinctions: Dutch Painting in the Age of Rembrandt and Vermeer at Boston's Museum of Fine Arts 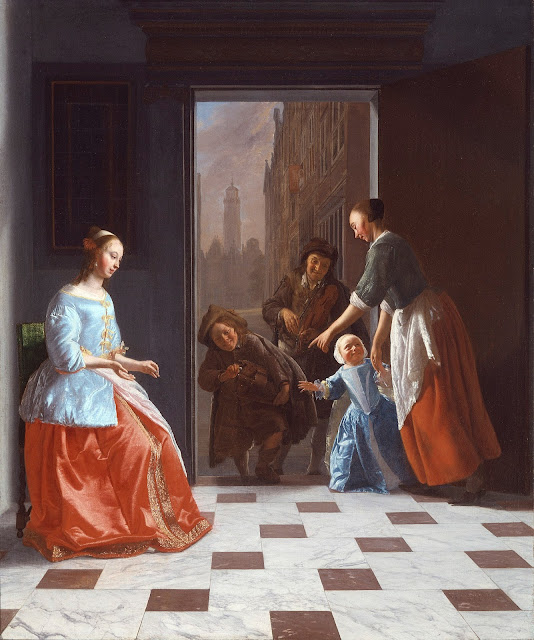 Class Distinctions:
Dutch Painting in the Age of Rembrandt and Vermeer

Occasionally, when I walk into the galleries of an art museum, I get the sensation that I've stepped onto the pages of an art history book. That feeling often strikes me in MOMA where so many of the great works of early Modernism are displayed in close proximity.

A recent visit to Boston's Museum of Fine Arts (MFA) provided a similar feeling of crossing a portal of time. The pages I walked onto, however, dealt more with the realm of history than of art. A consciousness of past time occupied the foreground here, matters of foreshortening and brush stroke being pushed a bit  to the side.

That is not to say that the superlative exhibition at the MFA, Class Distinctions: Dutch Painting in the Age of Rembrandt and Vermeer lacks masterpieces of art. Of these, there are plenty. The Astronomer by Johannes Vermeer, on loan from the Louvre, is but one of the celebrated Old Master icons on view. 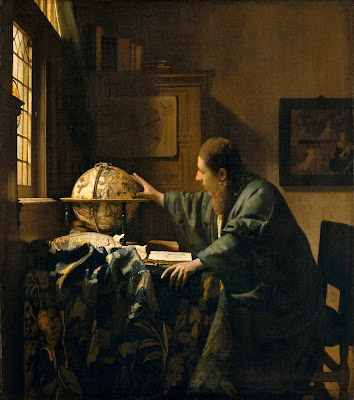 The theme of Class Distinctions, however, takes a different path than most other treatments of the Dutch Golden Age. Previous exhibits have often stressed the innovations and individualism of the great Dutch artists.

Class Distinctions examines how the revolution in art in the Netherlands provides insight into the social make-up of  the United Provinces during the seventeenth century. The Netherlands, like all of Europe in the 1600's, was divided into tightly circumscribed classes. Significantly, the MFA exhibit brilliantly reveals that interaction, not exclusiveness, was the keynote of Dutch society during that troubled century.

The exhibit also testifies to the connection between the growing tolerance and prosperity of Dutch society and the receptiveness of its citizens  to the arts. To the amazement and incredulity of the envious English, art works were purchased and cherished by all but the poorest Dutch citizens.

"God created the world," as the old proverb states, "but the Dutch made Holland."

And the same was true of the art of the Dutch Golden Age.

Interaction and cooperation enabled the Dutch, beginning in the early Middle Ages, to dredge marshland, build flood barriers and convert marginal land into pasture and farmland. In short, to "make" Holland. These same principles of conduct are apparent throughout the exhibition. Although the first three galleries are devoted to separate classes, the works of art reflect the binding ties of obligation and service which held the United Provinces together.

The first  exhibition gallery is devoted to the upper classes. Despite being surrounded by  other magnificent art works, Frans Hals' dynamic group-portrait, Regents of the St. Elisabeth Hospital of Haarlem, exerts an almost magnetic force. 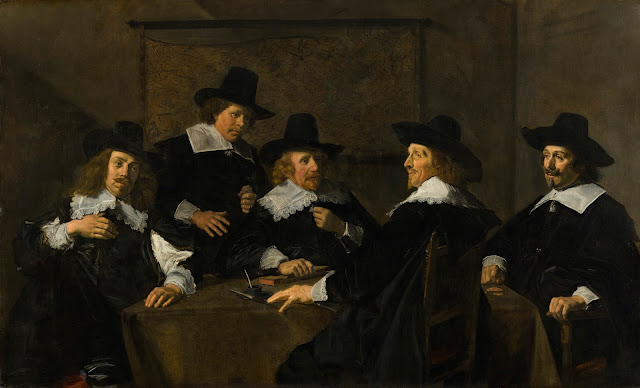 Frans Hals, Regents of the St. Elisabeth Hospital of Haarlem, 1641

Hals painted Regents in 1641, a year before Rembrandt's fabled Militia Company of Captain Frans Banninck Cocq, misnamed the Nightwatch. Like Rembrandt, Hals shows an animated scene of upper class officials performing their civic duty. Unpaid - except in honor and prestige -these Regents undertook vital tasks, insuring that the poor received effective aid and that the lid on dissent was kept securely fastened.

Hals painted group portraits of female regents, as did his rival, Johannes Verspronck. It is a pity that one of these portraits of regentessen could not have been included in Class Distinctions. It is virtually the only significant omission in this brilliantly curated exhibit.

Another outstanding work in the first gallery highlights the military  and diplomatic effort needed to protect Dutch society during the Golden Age. Frederik Hendrik, Prince of Orange, painted by Anthony van Dyck, about 1631–32, shows the Stadholder or chief executive of the United Provinces.

With self-rule as the motivating force of the Dutch resistance to Spain, the power of the Stadholder might well have been reduced to ceremonial insignificance. The opposite was true. As Stadholder, Frederik Hendrik was the supreme military leader or kapitein-generaal but answerable to the Dutch legislature, the Estates General. 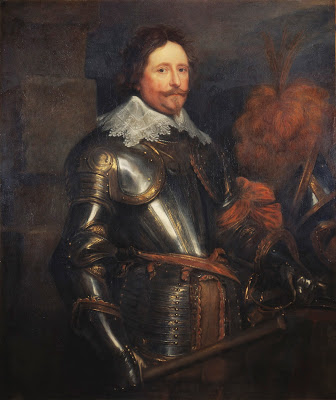 The careworn face of Frederik Hendrik (1584-1647) reflects his difficult position. As Prince of Orange, he was a hereditary nobleman but also the leader of a republic battling for its freedom against mighty Spain. Frederik Hendrik spent his whole career fighting - and beating - the Spanish. He never wore fancy armor in combat as he does in van Dyck's portrait but this battle gear symbolizes his life of service to his county men.

The second - and the central - gallery of the exhibit deals with the broad social category that made the Dutch independence movement a viable enterprise. Ship builders and shop keepers, clergyman and tavern owners, lens makers and artists - all combined and cooperated to form the first recognizable middle class in a modern sense of the term.

With roots stretching back to the 1300's, the Dutch middle class had a degree of influence during the Golden Age that was unmatched by any other nation in Europe. As with the upper class regents and regentessen, the role of women in the contributions of the middle class is readily apparent as well.

Rembrandt's The Shipbuilder and his Wife depicts the interaction of Jan Rijcksen (1560/2-1637) with his wife, Griet Jans. They were a Roman Catholic couple and loyal citizens of the Dutch Republic. Rijcksen was the master ship builder of the Dutch East India Company. Rembrandt's painting, one of his early masterpieces, shows a preoccupied Rijcksen being handed a note by Griet Jans. 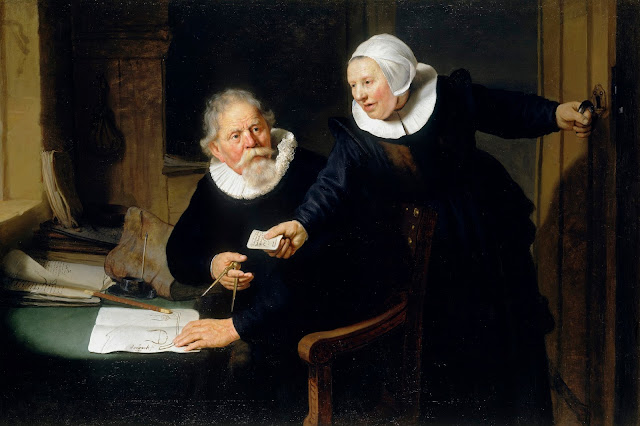 In Rembrandt's unforgettable work, Rijcksen looks up, perplexed and startled like an absent-minded professor who has just been reminded that his lecture began fifteen minutes ago. Griet Jans, by comparison, is a model of calm and efficiency.

It was a typical situation. Dutch men engaged in politics, war, commerce and science. Dutch women were left to run the homes and very often the family business affairs, thus keeping  the whole enterprise from crashing into ruin. 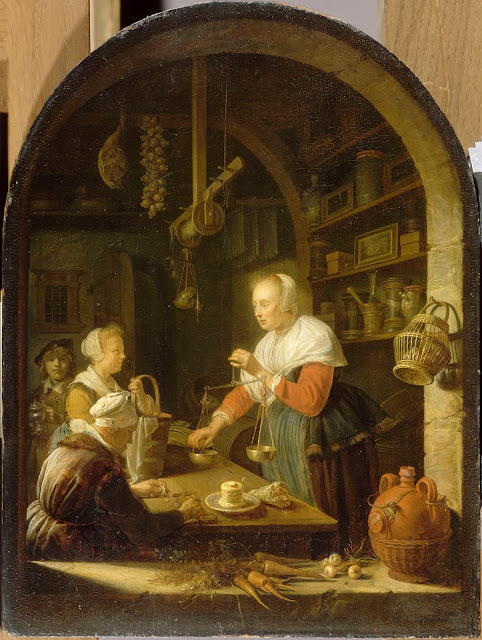 Gerrit Dou's Grocery Shop, dated to 1647,  and Adriaen van Ostade's The Fishwife (displayed in the gallery devoted to the Dutch lower class) likewise show the vital role of women in the day-to-day management of Dutch economic life. But women had an inspirational role as well, serving as guardians of what Simon Schama calls  "the moral geography" of the Dutch Republic.

Faced by the awesome, if brittle, power of Spain, followed later by French invasions under Louis XIV, the Dutch could not afford the luxury of always keeping their women at home. Yet the family hearth was of transcendent importance to a people fighting for their independence. Pieter de Hooch evoked the quiet, clean, peaceful atmosphere of the Dutch home in a series of memorable paintings like Interior with Women beside a Linen Cupboard, painted in 1663.

In de Hooch's painting, a mother and her elder daughter fold and store the family linen. A younger daughter pauses from playing with her hockey stick to watch. The wider world beckons beyond the vestibule or vorhuis of the home but the little girl is learning how the "moral geography" of the Dutch home - and the Dutch Republic - is maintained: by unremitting work and obsessive attention to detail.

De Hooch's painting testifies to the personal toll that it took to "keep the home fires burning." This particular work is one of the last great family-themed works that he did. After 1663, de Hooch stopped painting scenes with children. Two of his own children died around that time, followed by his wife in 1667. Financial woe added to his anxiety, the art market all but collapsing during the 1660's. De Hooch began painting scenes of elegant ladies and dashing gentlemen, perhaps to entice wealthy clients. De Hooch's muse soon abandoned him and he died in an insane asylum in 1684. 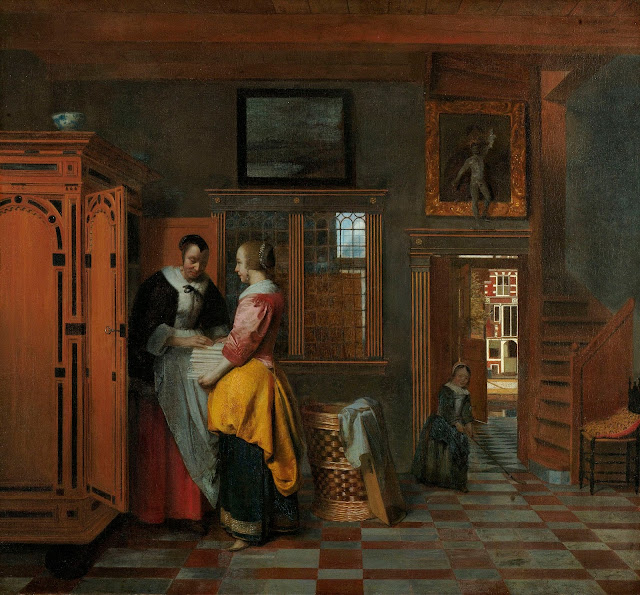 Pieter de Hooch, Interior with Women beside a Linen Cupboard, 1663

Standing over the door frame in de Hooch's Interior with Women beside a Linen Cupboard is a curious figure. In his book, The Embarrassment of Riches, Schama identifies the peculiar statue as Mercury, god of commerce. Mercury is holding a bag of coins. Was this an admission by de Hooch of the financial pressures that menaced the "moral geography" of the Dutch home?

Whatever the relation of de Hooch's personal circumstances to the composition of his painting, the use of doorways and the vorhuis as a stage for pictorial drama appeared in other Dutch paintings as well. Jacob Ochtervelt used the door frame and vorhuis as a motif in a number of his paintings. It is the point where the lives of the well-to-do and laboring poor intersect.

Standing on the other side of the doorway in his painting (the introductory image of this review), Ochtervelt shows itinerant musicians. They are performing an impromptu concert for a middle class child and her nurse, with a reward in hand from the lady of the house.


The charm of this wonderful painting should not obscure its serious theme. In this moment of shared humanity, we can see how the Dutch class system preserved both the lines of demarcation and communication between rich and poor. In this genre scene, we are made aware of how the United Provinces remained united. 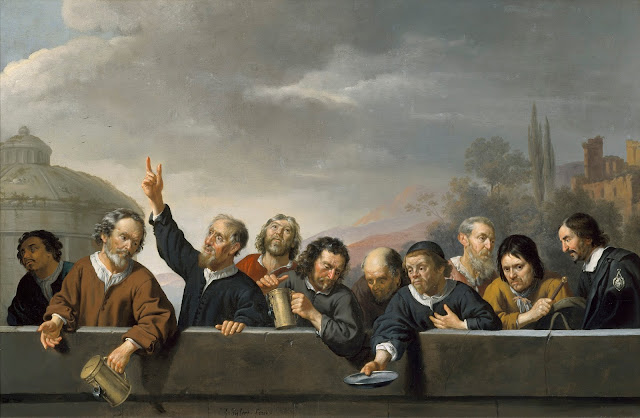 The third and fourth galleries of Class Distinctions display numerous works that depict the lives of the poor or the ways that the social classes mingled, associated and worked together. Portraits of the Men from the St. Job Inn in Utrecht Collecting Alms by Jan van Bijlert is particularly noteworthy.

The fourth gallery has a surprise in store, even for art lovers like me who expected great things from Class Distinctions. Ronni Baer, the MFA curator who planned the exhibition, prepared a stunning mini-exhibit of three tables, each set with the dinnerware and table accouterments of the three Dutch classes during the 1600's. The pieces were meticulously selected from art collections from the Netherlands and the United States.


I was transfixed by this ingenious and moving display of artifacts from the everyday lives of the Dutch people. It was like a door had been opened to the Golden Age and I was permitted to stand in the vorhuis to get a glimpse.

A contrast of the Upper & Lower Class table settings in the Class Distinctions Exhibit.


﻿
It is impossible to give a true sense of this insightful display in an online review like this. By grouping photos of the upper and lower class table settings, I hope to enable the brilliantly orchestrated sense of contrast to be apparent. 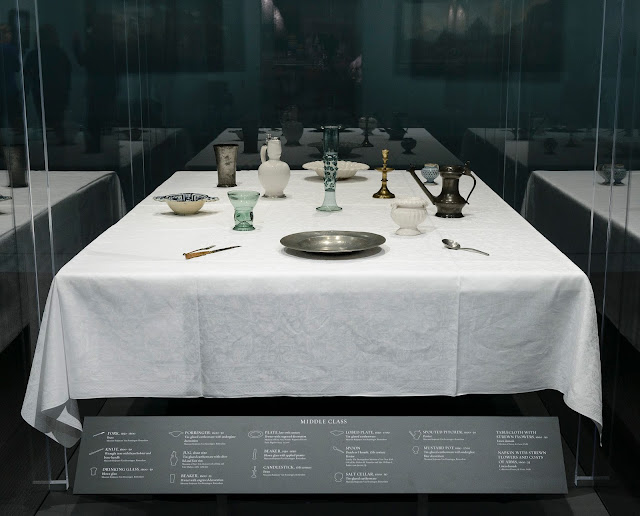 With a more detailed view of the middle class setting, hopefully the feeling of kindred experience that this tableau engenders can be grasped as well.

This year has been extraordinarily rich in wonderful art exhibitions. I will not be so foolhardy as to pick an Academy Award-style "best exhibit" for 2015.  However, Class Distinctions: Dutch Painting in the Age of Rembrandt and Vermeer does deserve an extra word of praise.

Like Job Berckheyde's Baker, announcing that his baked goods are ready and waiting for rich and poor alike, the MFA exhibit sounds the trumpet of our common humanity. 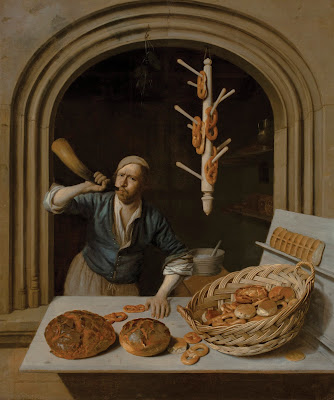 Job Berckheyde, The Baker, about 1681


﻿
Whether we wear an elegant lace ruff or a woolen scarf about our necks, we are all children of God. And like the Dutch folk of the Golden Age, we are all fed with the bread of life from God's table.

Images courtesy of the Museum of Fine Arts, Boston

Photos of the Class Distinctions table displays at the Ann and Graham Gund Gallery © Museum of Fine Arts, Boston

Posted by Art Eyewitness at 7:51 PM