Gods and Mortals at Olympus at the Onassis Cultural Center NY 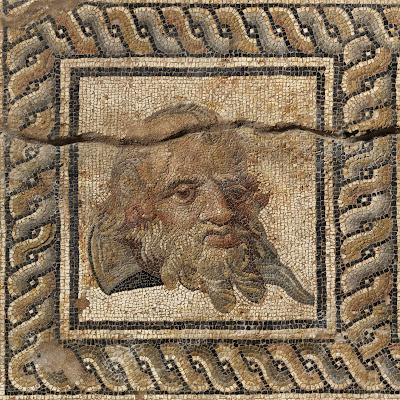 Gods and Mortals at Olympus:Ancient Dion, City of Zeus

The greatest Greek poet of the twentieth century, C.P. Cavafy, wrote poems about gods and men, ancient and modern. Cavafy was a master of insight into the human soul. With a stiletto thrust of irony, Cavafy could skewer the proud and the powerful while investing some long-dead youth from the Hellenistic past with a touch of immortality.

A brilliant exhibition of Greek art, Gods and Mortals at Olympus at the Onassis Cultural Center NY in midtown Manhattan, evokes Cavafy's verse. Here among shattered, headless statutes and chipped memorials to forgotten sages, we see  gods brought down to earth and the human spirit set free.

The beautifully-renovated museum space of the Onassis Cultural Center - located appropriately enough in the Olympic Tower, 5th Ave. and 52nd St. -  is the site of superb exhibits dealing with all aspects and all eras of Greek art. Gods and Mortals at Olympus: Ancient Dion, City of Zeus is but the latest display of treasures from Greek museums on view in this New York City art venue. 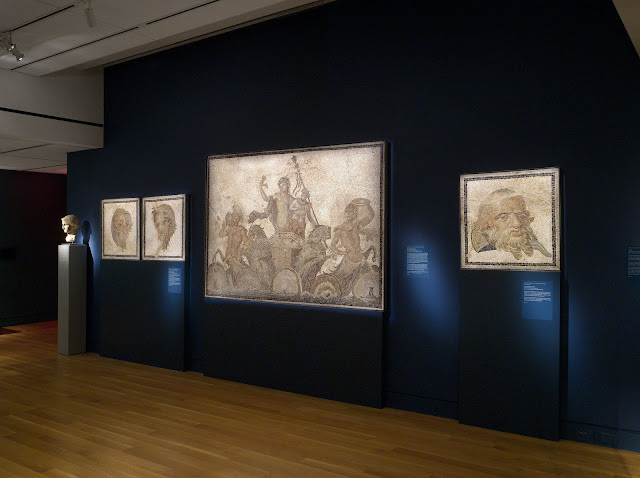 At the heart of Gods and Mortals at Olympus is a magnificent mosaic, the Epiphany of Dionysus. One can almost feel Cavafy's spirit lingering before this sensational work of art:

The Mosaic of the Epiphany of Dionysus shows the Greek god of wine and revelry riding in a chariot pulled by panthers. It is an extraordinary work. Mythology is summoned to life with absolute technical mastery in the placement of the thousands of stone tessarae composing this scene. This exactitude imparts a sense of vitality to this work of art, making the fantastical seem alive and believable.

This astonishing mosaic, dating to the late 2nd–early 3rd century AD, was excavated in the city of Dion in northern Greece. But give this magnificent work its due and for a few moments, there is indeed an "epiphany" of Dionysus right before you in New York City. 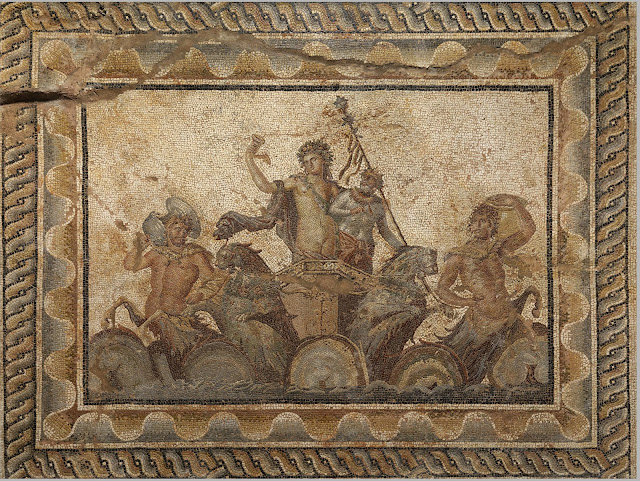 Dion, located near the base of Mount Olympus, was one of the principal centers of the religious cult of Greece in ancient times. Here Zeus reigned over the brood of jealous gods and goddesses whose vainglorious deeds reflected the lives of the Greeks in the valley below and throughout the Hellenic world.

Archaeologists believe that there was an altar created near the summit of Mount Olympus at a very early date, perhaps the tenth century BC. This was the period after the fall of the Mycenaean palace states, long considered the Greek Dark Age. This era was the time when the Iliad and the Odyssey were being refined in the oral tradition by bards and poets, later to be written down around 750 BC. 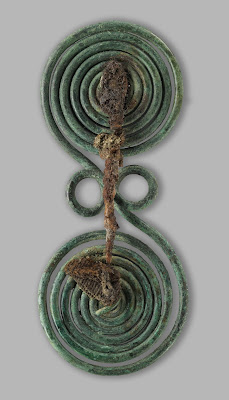 The altar to Zeus, if it existed, is lost to history. A small, spectacle-shaped brooch dating to sometime between 1000-700 BC was discovered in Dion. Created from copper alloy wire with iron fittings, this remarkable piece actually has some strands of fabric still attached. It hardly seems creditable that this brooch, with its striking sinuous design, could have been created during a "Dark Age."

Perhaps the real point of contention is whether there was a Greek Dark Age at all. Also discovered in Dion, a gold bracelet decorated with lion heads looks like it was unearthed from a tomb of a noble from this distant Homeric era. Yet it dates from five hundred or more years later, from the the third century BC. 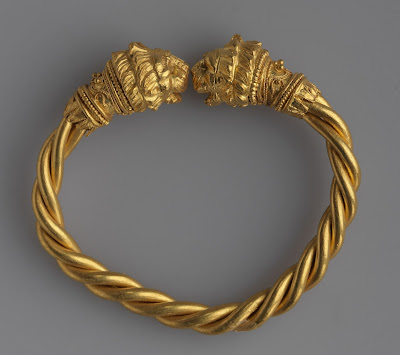 Greek history is full of such surprises.

To a remarkable degree, Gods and Mortals at Olympus surveys the entire history of ancient Greek art. It is true that Dion, located near the border of Thessaly and Macedonia, was a long way from Athens, Corinth and other dynamic centers of Greek culture. Yet, the exhaustive forty-year "dig" at Dion, led by the great scholar Dimitrios Pandermalis, has produced a rich archaeological record of the rise, fall and revival of Hellenic civilization. 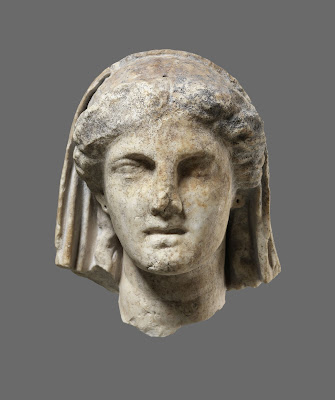 In terms of renewal, there is no more meaningful symbol than that of the goddess Demeter. During the excavations at Dion, a battered head of this goddess of the harvest was uncovered. It was originally part of statue dating to the late fourth century BC. This was the era of Alexander the Great who lavished funds on temple building at Dion, which had become the principal religious center of Macedon.

Demeter's head, however, testifies to violence, as much as to piety. It was discovered at a level marked by destruction and debris.

After Alexander's early death in 323 BC, his empire imploded and a recurrent round of civil wars undermined the strength of the Greek world. In 219 BC, troops from the Aetolian League, fighting against Macedon, sacked and burned Dion. This decapitated head of Demeter is likely a survivor from this grim period of Greek history.

Demeter, the nurturing goddess of agriculture and fertility, appears in another guise among the treasures on view at the Onassis Center. The ancient Greeks ventured to Egypt as merchants and mercenary soldiers centuries before Alexander reached there in 332 BC. They quickly saw parallels between Demeter and the the Egyptian goddess, Isis.

Demeter was the distraught mother of the abducted Persephone, while Isis was the grieving sister/wife of the murdered Osiris. Each goddess challenged the power of death on behalf of their loved one. To the peoples of Greece and Egypt, the seasonal release of Persephone from Hades and the reviving of the body of Osiris came to symbolize the return of spring and the promise of eternal life for the soul. From these similarities emerged one of earliest "global" religious cults of ancient times.

"Demeter is Isis," Herodotus declared in Book II of The Histories, written during the fifth century BC.

At Dion, excavators found a marble bas relief, dating to a century after Alexander,
depicting Isis as Demeter. 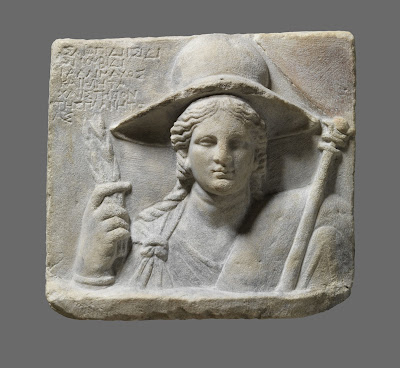 Relief Stele Depicting Isis as Demeter, Second half of 3rd–early 2nd century BC

This is a fascinating piece showing the two-way current of exchange between Greece and Egypt. It was not a case of a conquered or a co-opted divinity being taken back to Greece. There was a sanctuary built to Isis in Dion, not far from the sanctuary to Demeter. Given the fact that these sanctuaries co-existed in Dion, the bas relief reveals an open-minded religious plurality that enabled people to draw inspiration from many sources.

What was true for Demeter and Isis eventually influenced how mighty Zeus was envisioned as well. Zeus on his mountain-top throne was originally worshiped  as father of the Greek gods.  Greek culture went global under Alexander and  religious worship followed suit. Alexander, following his mystical experience at the oasis shrine of Siwa, equated Zeus directly with Amun-Ra, the patron god of the Egyptian city of Thebes whom the warlike pharaohs of the 18th Dynasty had promoted to lordship over the Egyptian pantheon.

After Alexander, Zeus no longer was identified exclusively with Mount Olympus. Rather, he was restyled as Zeus Hypsistos - the Highest - whose domain extended everywhere. Naturally, the folks back at Dion were unwilling to lose their connection with the father of the gods. An imposing statue of Zeus Hypsistos was unearthed during the excavations at Dion, minus its head. 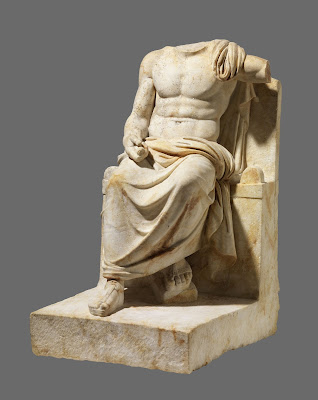 This statue of Zeus Hypsistos dates from the second century AD. Greece had been "liberated" by  the Romans back in 146 BC. The Greek city-states had lost every shred of power, except for some very local autonomy. They lost vast amounts of their greatest art treasures to Roman greed, as well. In 148 BC, the Roman commander, Quintus Caecilius Metellus, made off with a number of Dion's most honored sculptures, created by the fabled Lysippus.

Nobody has ever loved and looted Greece like the Romans. Yet, to their credit, the Romans eventually accorded Greece a "favored province" status. Many of the objects on view in Gods and Mortals at Olympus date to the more benevolent era of Roman rule, the second and third centuries AD. These includes the headless Zeus Hypsistos and a statue of an eagle from the sanctuary of Zeus at Dion. 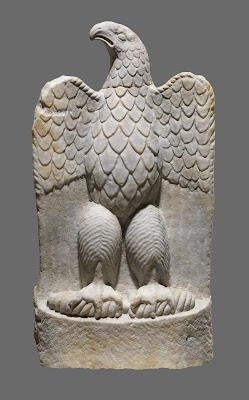 The eagle was the sacred bird of Zeus, but this marble raptor displays a distinctly Roman ardor. This proud, powerful bird shares a kinship with the gilded eagles on the standards of the Roman legions who had carried away Dion's treasures in a less happy age.

Dion prospered under Rome by virtue of a past which could not be looted. During the heyday of the Pax Romana, the ruling class of Rome was drawn to Greece to enjoy Hellenic culture and myth which we, even now so many centuries later, still appreciate. 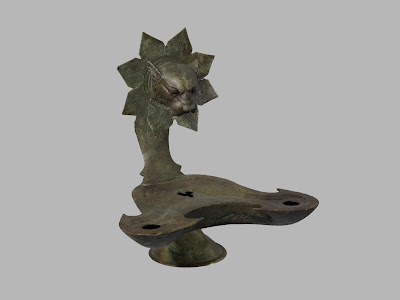 Talismans of the fabled past were everywhere at Dion. Metallic lamps graced with the heads of Dionysus' panthers and mosaic depictions of theatrical masks appeared at every turn.

The mosaic mask of Silenus, companion of Dionysus, bears witness to why this mythic past could not endure for long. This melancholy, wistful face serves as the introductory image of this review. Silenus, in this mosaic, looks like Zeus in retirement. His face bears the knowing countenance of an individual - or of a society - growing old gracefully, relentlessly.

Nothing lasts forever. Yet, Gods and Mortals at Olympus at the Onassis Center testifies to the undying human quest for transcendence. Such is the spirit which builds temples and resurrects  their ruins. Sometimes this is done by the sweat and toil of archaeologists, sometimes with immortal verse such as C.P. Cavafy's poem, "Ionic".

Excerpts from the poems by C.P. Cavafy, "The Procession of Dionysus" and "Ionic", are quoted from C.P. Cavafy: Selected Poems, translated by Avi Sharon, Penguin Classics, 2008.

Installation view of Gods and Mortals at Olympus: Ancient Dion, City of Zeus, on view at the Onassis Cultural Center NY; photograph by Joseph Coscia, Jr.